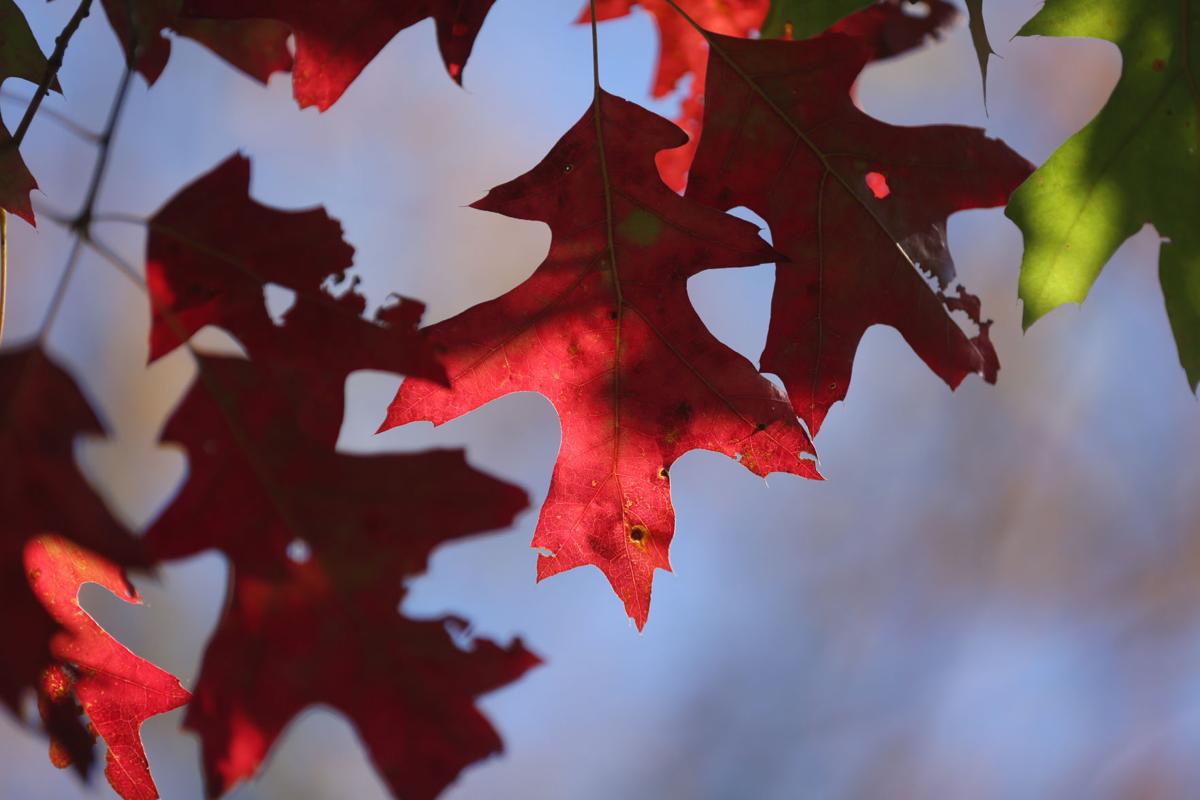 Scarlet oak leaves hang from tree canopy in the forest near Pandapas Pond. Leaf color on a single tree can vary widely depending the amount of sunlight it receives. 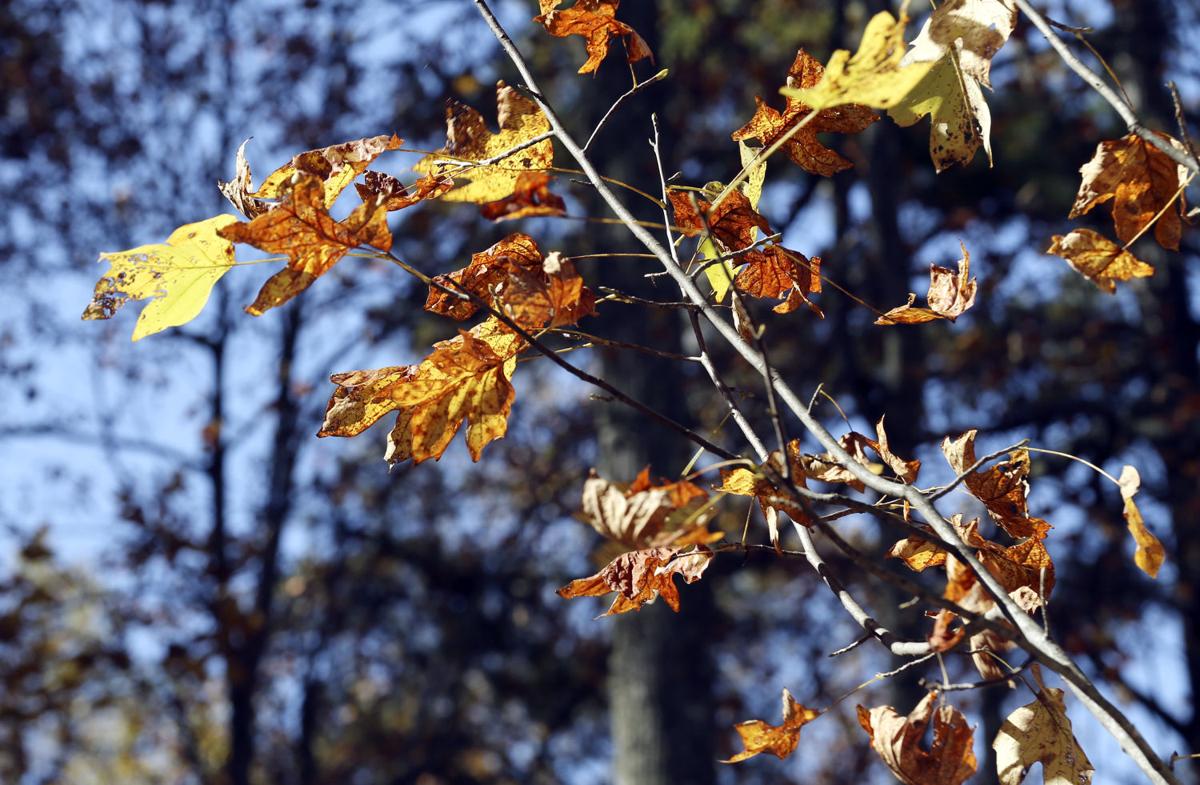 Autumn leaves glow in the sunlight at the top of Tinker Mountain in Roanoke, on a 2015 midday. 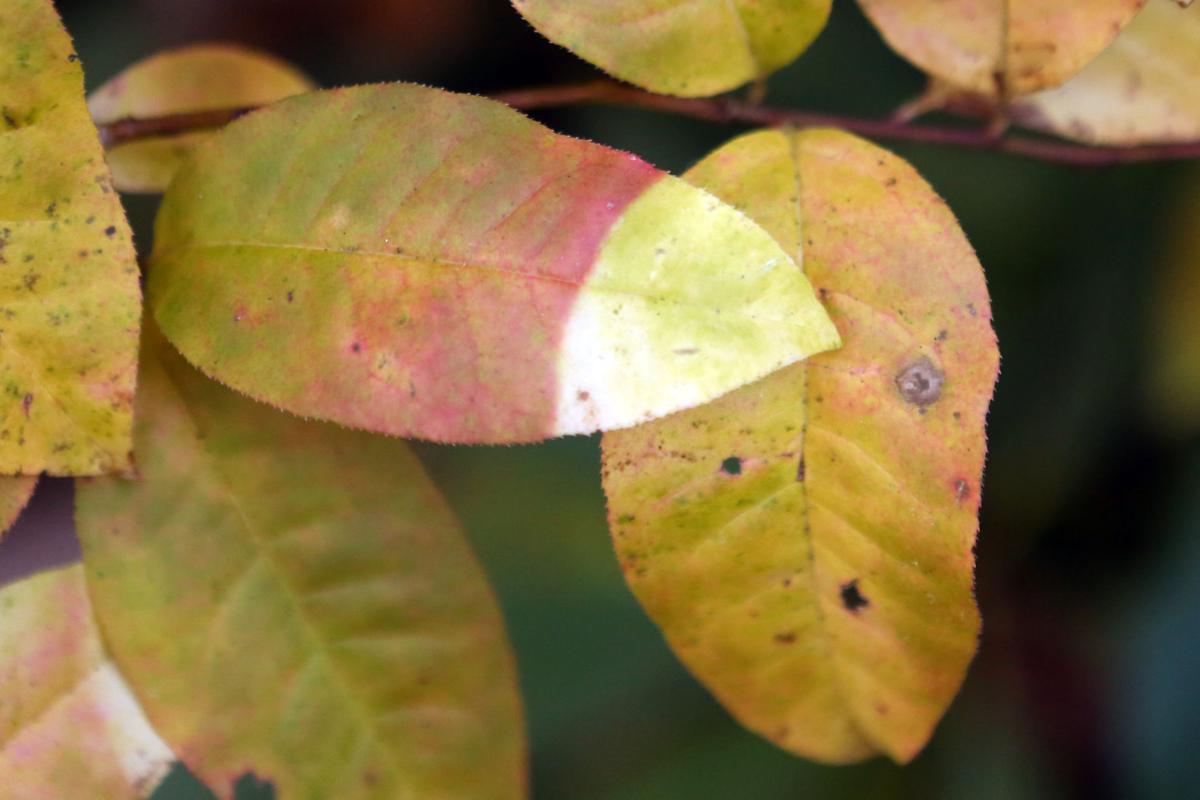 The amount of direct sunlight shows on part of a sourwood leaf. 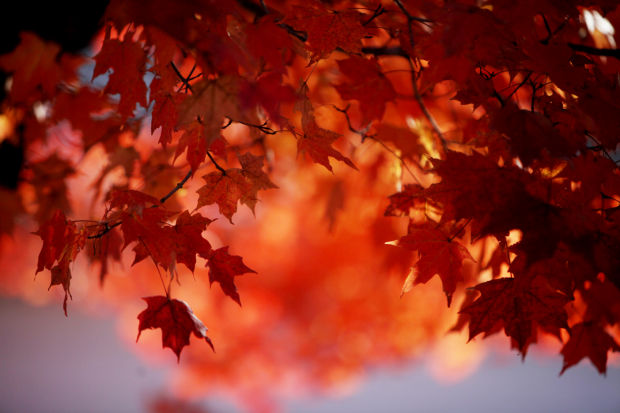 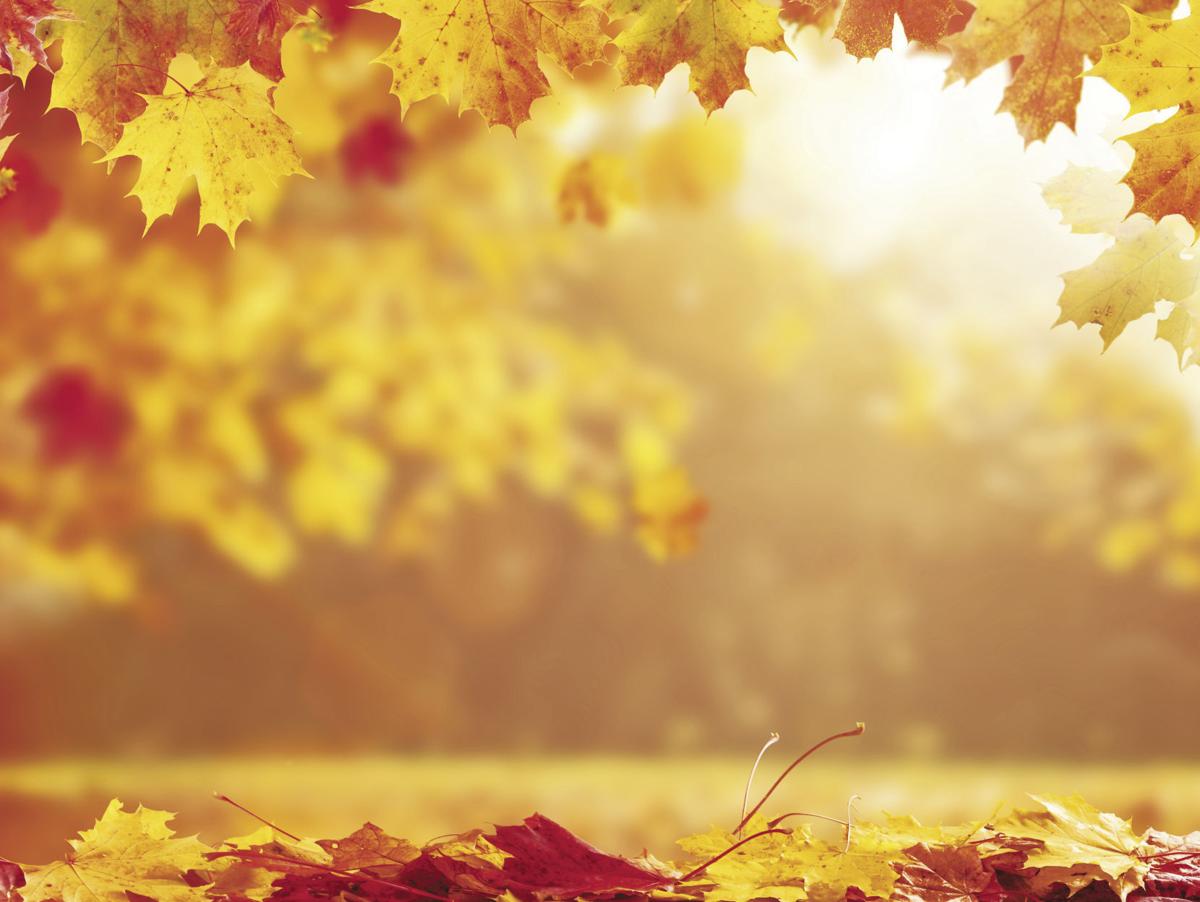 Autumn begins on Wednesday, but our region’s leaves won’t reach peak seasonal color for another two to three weeks. 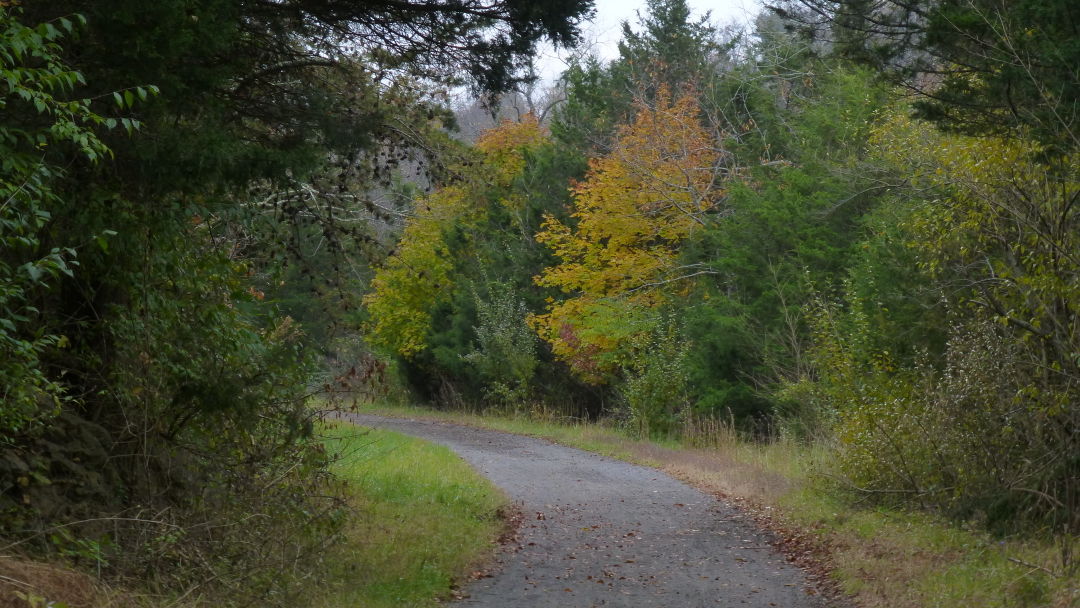 An autumn 2015 scene from the New River Trail, between Draper and Hiwassee.

Why do leaves change colors in the fall? Why don’t they turn blue? Will the changing of the leaves get later each year due to climate change? The mysteries of autumn are solved here.

the pigmentsFirst of all, why do leaves change colors when fall arrives? They do it because chlorophyll, the pigment that gives leaves their green color, breaks down and reveals other colors that were already inside the leaf all along.

Chlorophyll is the prime player in photosynthesis, the process of changing sunlight energy into sugars that nourish the tree. The powerful chlorophyll reflects green, which hides other colors.

When longer nights and cooler temperatures of autumn arrive, the leaves stop making food, which causes the chlorophyll to break down and be absorbed.

“That reveals the oranges and yellows” and other colors, Seiler said. Cool autumn nights and sunny days can spark more reds, he added.

“Sunny, bright days really trigger red pigment to form,” Seiler said. “In fact, if you ever see a leaf that was tucked under another leaf, it won’t develop any red” because it wasn’t exposed to the sunshine.

Not feeling blueIf the loss of green in leaves allows the reds, yellows and reds to emerge, why don’t we see blue leaves, too?

“The simple answer is that we don’t know why,” Seiler said.

Blue pigment is rare in nature. Some studies have found that less than 10% of plants have blue flowers.

Plants that do appear blue might actually be showing a mix of pigments and natural light that replicates blue, according to a study done by Florida International University.

So, it’s red, white and blue for Fourth of July, and red, yellow and orange for fall.

With annual average temperatures warming in recent decades, could it be possible that the turning of the leaves will happen much later in future falls?

Seiler doesn’t believe so. That’s because the shorter days of autumn have the biggest impact on when leaves change color.

“The whole climate thing is not going to move it much because it’s tied to day length,” Seiler said.

Some years, though, leaves do change later than usual due to warm temperatures, especially years when nighttime low temperatures are above average. Warmer temperatures can delay the breakdown of chlorophyll.

Eventually, the shorter days and longer nights will trigger the color change in the leaves. Some years that might be mid-October, other years a few weeks later.

“But we’re not looking at leaves changing in December,” Seiler said.

This summer was fairly dry throughout Southwest Virginia, but Seiler thinks that the region received enough sporadic rain, which included passing tropical systems, to ensure a vibrant fall.

“Overall, we got enough precipitation scattered around,” Seiler said. “If we keep the moisture levels up, and have some sunny bright days and cool nights, we should be good.”

Of course, one freezing night or one tropical system with high winds could erase fall’s colors.

“The leaves could look great,” Seiler said, “then everything gets blasted off [by wind] and everyone will say it was a bad year.”

Even though autumn begins this Wednesday, the leaves in our region won’t reach peak autumn color for another two to three weeks.

The interactive Fall Foliage Prediction Map (smokymountains.com/fall-foliage-map) predicts that leaves in the Roanoke and New River valleys will be at their colorful peak sometime between Oct. 11 and 18. Counties farther west could be changing a week earlier than that, according to the map’s tool that allows users to check specific dates.

The Virginia Tourism Corporation’s website includes a fall foliage report (bit.ly/2XjElKE) that should be updated soon.

Have you ever seen a Taj Mahal haircut?

10 features people look for when buying a car

10 features people look for when buying a car

Why Americans are changing their home decor

Why Americans are changing their home decor

The Rome-based design team has just unveiled renderings of a brand new 69-meter yacht design with a "gaping hole" right in the middle.

If you don't know where your onions came from, throw them away to prevent salmonella, CDC says

A salmonella outbreak that has sickened more than 600 people in 37 states has been linked to various types of imported onions, federal health officials said.

Guide to fall color: See colors before they fade away

When is the best time to soak in the colors of fall? Get the answer here.

Do you think you have a good handle on identifying trees by merely looking at their leaves? See if you can identify these 10 common trees.

More ‘disease’ than ‘Dracula’: How the vampire myth was born

The past century’s vampires have often been a bit dashing, even romantic. That’s not how the myth started out.

Mindful eating could change your food habits and overall life. Here's how to start

If you want to try mindful eating, here's what else you should know about getting started and potential hurdles.

There’s no need to pull out the candy catapult this year, but a few reasonable precautions can keep COVID-19 transmissions in check.

Scarlet oak leaves hang from tree canopy in the forest near Pandapas Pond. Leaf color on a single tree can vary widely depending the amount of sunlight it receives.

Autumn leaves glow in the sunlight at the top of Tinker Mountain in Roanoke, on a 2015 midday.

The amount of direct sunlight shows on part of a sourwood leaf.

Autumn begins on Wednesday, but our region’s leaves won’t reach peak seasonal color for another two to three weeks.

An autumn 2015 scene from the New River Trail, between Draper and Hiwassee.