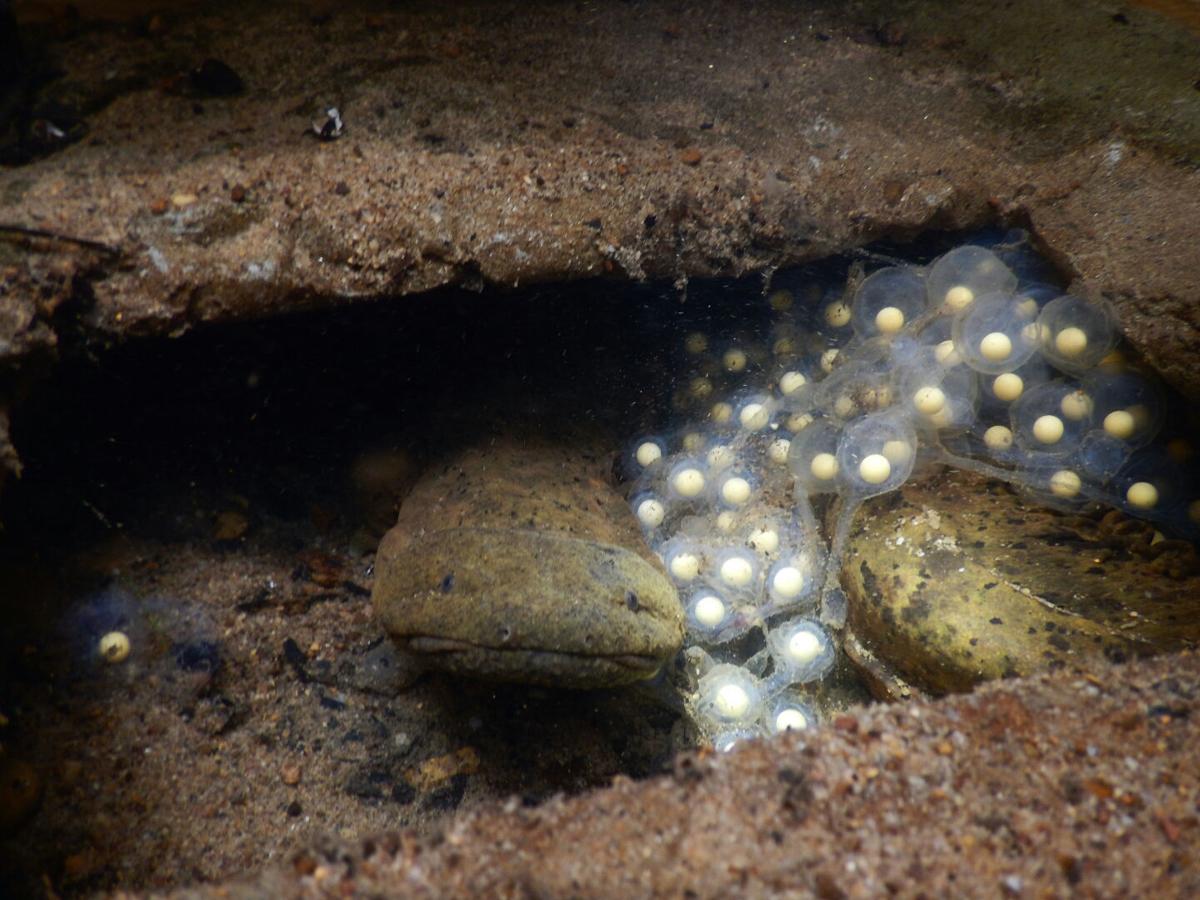 A male eastern hellbender with his eggs in an underwater nest box. The hellbender is one of the largest salamanders in North America and its populations are plummeting. 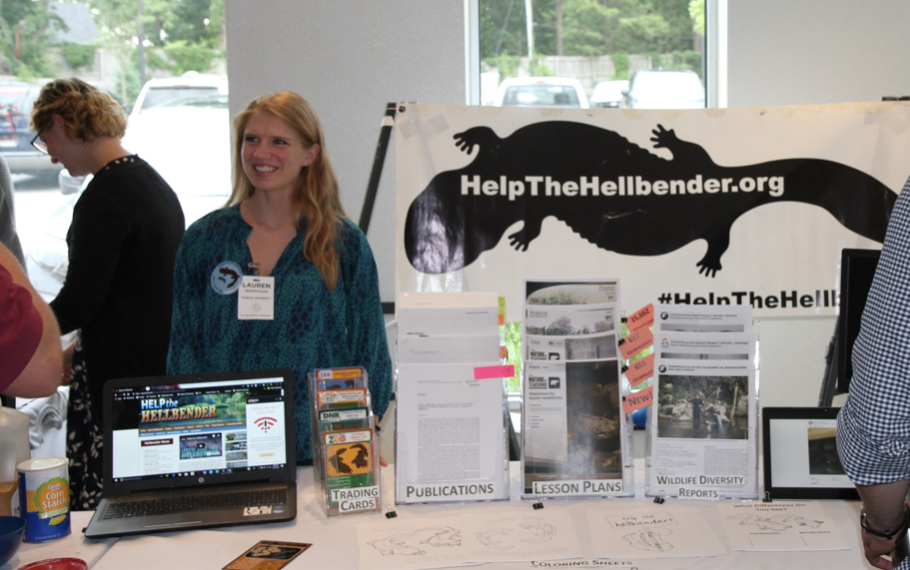 An outreach table at the 9th Biennial Hellbender Symposium hosted by Virginia Tech in June. 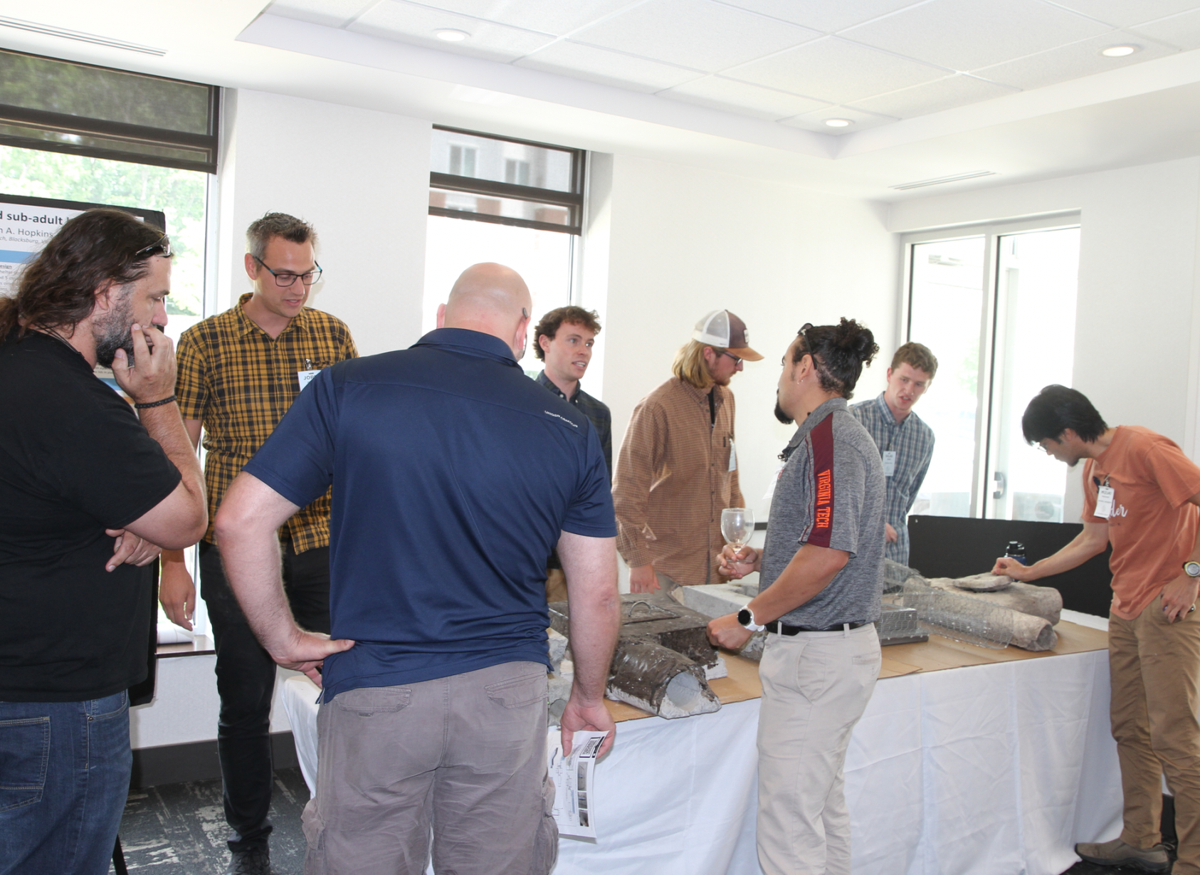 Researchers check out artificial nest boxes that help to protect hellbender salamanders. The boxes were a key topic at this year's symposium.

With support from the Fralin Life Sciences Institute at Virginia Tech and several other co-sponsors, the 9th Biennial Hellbender Symposium wrapped up on June 20 in Blacksburg after three days of talks, exhibitions and poster sessions.

The hellbender (Cryptobranchus alleganiensis) is one of the largest salamanders in North America and the third largest salamander in the world after the closely related Chinese and Japanese giant salamanders. Two subspecies of hellbenders can be found along the Appalachian mountains and in the Ozarks of Missouri.

Despite the hellbender’s fearsome appearance, it is known for paternal care of its offspring, the subject of an ongoing study by symposium co-organizer and hellbender expert William Hopkins, professor of fish and wildlife conservation in the College of Natural Resources and Environment and director of VT's Global Change Center.

In the last decade, populations of the hellbender have plummeted, and researchers are baffled as to why. Although adults can often be found in the wild, few juveniles or young adults are found during surveys. Researchers have posited many possible causes: sedimentation caused by deforestation; pollution from fracking in the eastern mountains; loss of habitat due to a number of factors, climate change and agriculture among them; and the onset of the now globally ubiquitous chytrid fungus, a foreign pathogen originating in Asia and spread through the pet trade.

The symposium was founded nearly 20 years ago as a means for researchers from academia, NGOs, zoos and aquaria, and state and federal agencies to gather and exchange information about their findings and the strides they’re making toward understanding the species’ decline and efforts towards its recovery.

This year’s keynote speaker, Professor Emeritus Thomas Pauley of Marshall University, said, “I’ve been attending this symposium from the beginning and it has really provided a nucleus of research and community for those working with this species.”

Sometimes, with a species seemingly so secretive and difficult to study, one of the symposium’s best features is the camaraderie and information exchange it provides for researchers.

This year’s panels and presentations featured numerous talks about a variety of strategies for helping boost the hellbender’s populations, from a variety of underwater nest box designs to sharing data about the changing nature of the rivers and streams that hellbenders inhabit. For example, several research teams displayed modifications of concrete nest box designs that allow researchers to monitor hellbenders in the wild, and also serve as a valuable habitat restoration tool. Hopkins’ team has successfully used their box design to conduct pioneering studies of the reproductive ecology of this poorly understood species.

Other presentations delved into the ways in which hellbenders are studied and whether or not better techniques might lead to better results in terms of tracking and survivorship. One study in particular by Stephanie Morrison, a graduate student at Missouri State University, looked at how electrofishing, a common technique for surveying fish populations, might be detrimental for hellbenders.

Researchers also discussed the environmental impacts on streams that some of them have been monitoring for decades. Hellbender populations in eastern Ohio have dropped 82% in the past decade. With the rise of fracking, streams are showing much heavier sedimentation and pollution than in previous years. One fracking company in eastern Ohio self-reported more than 70 watershed violations. Gregory Lipps of Ohio State University asked rather poignantly, “Is the original goal of having self-sustaining hellbender populations realistic? Are we just buying time for what we hope is a better future?”

In the face of such alarming signs, the U.S. Fish and Wildlife Service was in attendance to discuss their ongoing assessment of the eastern subspecies and whether it, or any one of its four distinct population groups, should be federally protected as threatened or endangered. The Ozark hellbender subspecies is already considered critically endangered and receives federal protection.

“Such a bleak outlook for the species can be a bit depressing, but this symposium always gives me hope,” said Hopkins. “It is inspiring to see nearly 100 experts gather to compare notes in hopes of saving this species from the brink of extinction. Scientists came to Blacksburg from as far as Japan to help address this conservation challenge. The passion in the room was palpable.”

One thing that was clear from all the talks, posters and updates given from the eastern hellbender’s range: each population is very different, often responding differently to the same recovery technique that is successful elsewhere. What works well in Missouri may not work as well in North Carolina or New York and no one is sure why. All that can be done is to keep trying, keep innovating on what works and modifying it to specific field conditions.

Dr. Pauley encouraged his successors in the study of salamanders never to lose their curiosity or sense of wonder: “Leave no stone unturned. You never know what might be under there.”

If the symposium provided evidence of anything, it’s that hellbender researchers will continue not only to search for their study subjects but also to "leave no stone unturned" in finding the right conditions to boost hellbender populations far into the future.

Analysis: For Biles, peace comes with a price - the gold

TOKYO (AP) — When you spend the better part of a decade redefining the possible within your sport, the standards change. Good is no longer good enough. Sometimes, great isn't either.

The car market is 'absurd.' Here's what to do if you have to buy one anyway

Here's what you need to know about shopping for a car in today's crazy market.

Our team of experts has selected the best tamale steamers out of dozens of options. Don't buy a tamale steamer before reading these reviews.

Pet of the Week: Lady

This gorgeous girl is “Lady.” She is approximately a year and a half old, has been spayed and is current on all of her vaccines. If you are in…

Six pet owners told CNN their dogs have gone missing or died while in care of a sitter they found on the Rover platform since the start of the pandemic.

Diabetes complications can be prevented, doctors say, and the Black community is enduring more amputations due to diabetes than other populations.

What to know about signs of autism spectrum disorder

The Kitchn: These are the best shortcut cinnamon rolls you’ll ever make

These gooey, tender cinnamon rolls are everything you love about the classic brunch treat — down to the blanket of cream cheese icing — but they’re ready in a fraction of the time.

At an extraordinary Olympics, acts of kindness abound

TOKYO (AP) — A surfer jumping in to translate for the rival who’d just beaten him. High-jumping friends agreeing to share a gold medal rather than move to a tiebreaker. Two runners falling in a tangle of legs, then helping each other to the finish line.

A male eastern hellbender with his eggs in an underwater nest box. The hellbender is one of the largest salamanders in North America and its populations are plummeting.

An outreach table at the 9th Biennial Hellbender Symposium hosted by Virginia Tech in June.

Researchers check out artificial nest boxes that help to protect hellbender salamanders. The boxes were a key topic at this year's symposium.