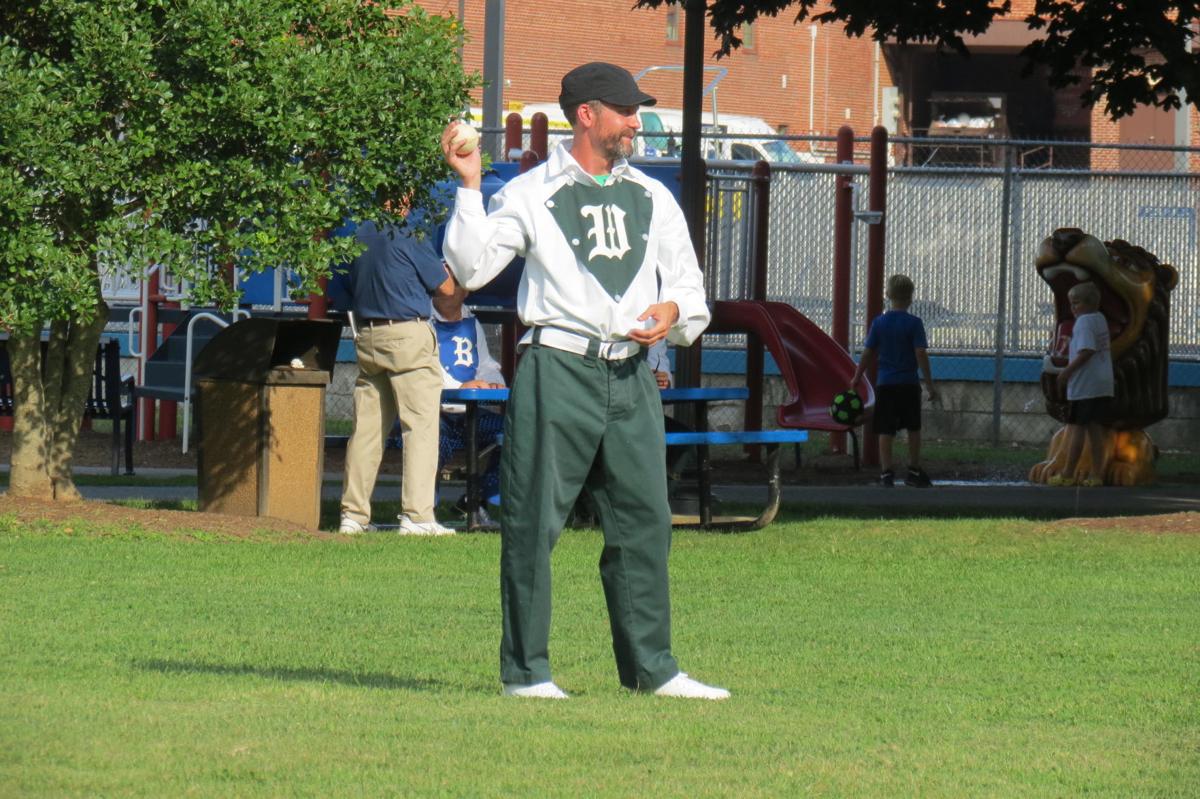 Jeremy Miller warms up in the infield for the Deacons. 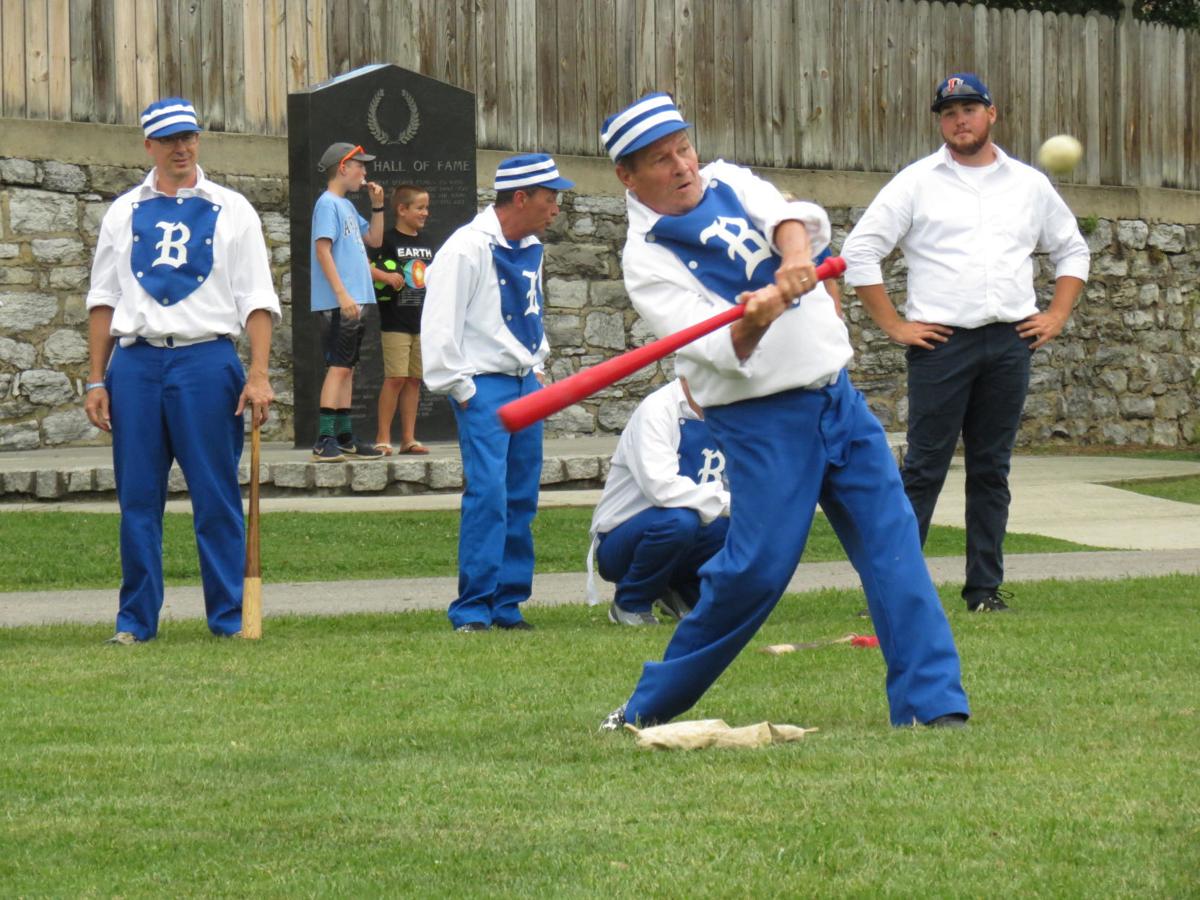 Bereans batter Charlie May, facility and technology coordinator at the Wytheville Meeting Center, prepares to send the ball into the outfield. 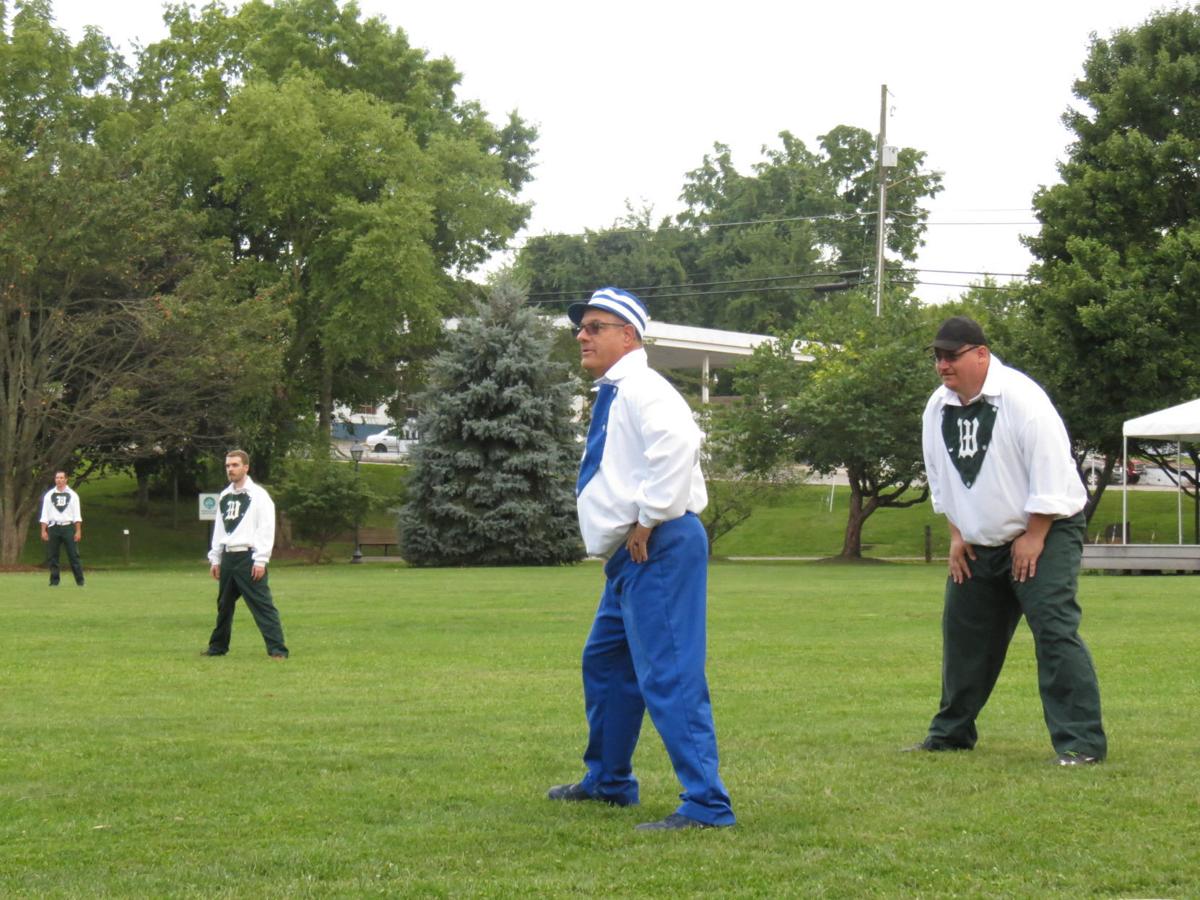 If you’re looking for an opportunity to take a step back in time, exits 67, 70 and 73 off of Interstate 81 will lead you to a “Field of Dreams” type of nostalgia. Rather than a cornfield in Iowa, you can visit Withers Park in Wytheville to experience vintage baseball as it was played more than 150 years ago.

History buff Michael Gillman, coordinator of heritage programs and sites for the town of Wytheville’s Department of Museums, organized Wytheville’s vintage baseball team after stumbling across a YouTube video on the subject from Gettysburg National Park. He asked Director of Historic Resources Frances Emerson about initiating the idea in Wytheville, and she gave him license to proceed.

Gillman refers to vintage baseball as a “gentleman’s game,” but is quick to add that play is not devoid of competition. “It’s a hitter’s game,” he explained. “According to 1864 rules, if the batter lays the bat across home plate, the pitcher is obliged to throw the underhanded pitch as instructed by the prospective hitter.”

In January of 2018, Gillman called a meeting for anyone interested in a vintage baseball team, and seven attended. The first game was played at Wytheville’s historic Homestead property with 147 spectators looking on. Today, 22 players consistently participate in practices and games that field two distinct teams. The teams abide by 1864 rules which call for bare-handed play (no mitt) with a 9-1/2- to 9-3/4-inch ball of leather-wrapped twine that can weigh no less than 5-1/2 ounces and no more than 5-3/4 ounces.

Players are decked out in period uniforms thanks to the generosity of supporters. The team called the Bereans, funded by Berea Christian Church, wear blue and white uniforms and sport a “B” on their chest plate. The team wearing green and white uniforms were funded by the Wythe County Historical Society (“W”) and call themselves the Deacons, named for Major League baseball pitcher Deacon Phillippe – a Rural Retreat native who played in the first World Series in 1909. Hats were funded by Richard and Corinne Johnson. Red bats were made available through State Farm insurance agent Jennifer Walters. Additional funding was made available through Rick and Shirley Knack of Knack Engineering and a number of anonymous donors.

Players range in age from 20-something college baseball alumni to a 72 year-old town employee who all share a love of baseball, and include town employees, teachers, factory workers and a high school varsity baseball coach, among other folk.

Under the auspices of the Town of Wytheville Museums, the vintage baseball program is working to create awareness among other southwest Virginia localities in the hope that they may form similar programs with the potential for games between communities. Play is open to men and women, age 18 and older.

The next chance to see a vintage baseball game in Withers Park will be Thursday, Sept. 19, at 6 p.m. The park is located at 300 N. Fourth St., a block off Wytheville’s Main Street.

For more information or to discuss becoming a part of a vintage baseball team, contact Michael Gillman at (276) 223-3330 or michaelg@wytheville.org.

From water to 'everything,' here's a look at every US president's favorite drink

Franklin Pierce earned the distinction of the drunkest president, while Abraham Lincoln was pegged the driest.

Robert Sheffey, namesake of Sheffey Elementary School in Wytheville, and the Robert Sheffey Memorial Camp Meeting in Trigg, will be having his…

Buying Guide: Beat the heat with this extra-large inflatable pool

No public pools, no problem. 🏊‍♀️

In June, I participated in a protest against the unnecessary and violent death of George Floyd. It was fairly tame. We held signs, wore masks …

This portable dog water bottle is made for long summer walks

Cowden Technologies LLC of Blacksburg has been awarded a $75,000 grant from the Commonwealth Research Commercialization Fund administered by V…

This is the first time that doctors in Italy have successfully separated conjoined twins in total posterior craniopagus, which means they shared a skull and a majority of blood vessels. The operation lasted 18 hours.

This wireless fence will keep your dog from escaping

Keeping your dog from running into the street or getting lost after leaving your yard are major concerns for pet owners, but building a fence isn’t always simple. Neighborhood codes may specify certain types of fences, and costs can be prohibitive. Electric fences can pose their own problems, since most models need to be buried under the perimeter of the yard.

It is possible, I learned, to have less than 24-hour delivery service during these odd shipping days. Just tell the folks at the University of…

How to get rid of fruit flies

It's time to ban this annoying summer pest.

How coronavirus moves through the air beyond coughing

How coronavirus moves through the air beyond coughing

Jeremy Miller warms up in the infield for the Deacons.

Bereans batter Charlie May, facility and technology coordinator at the Wytheville Meeting Center, prepares to send the ball into the outfield.