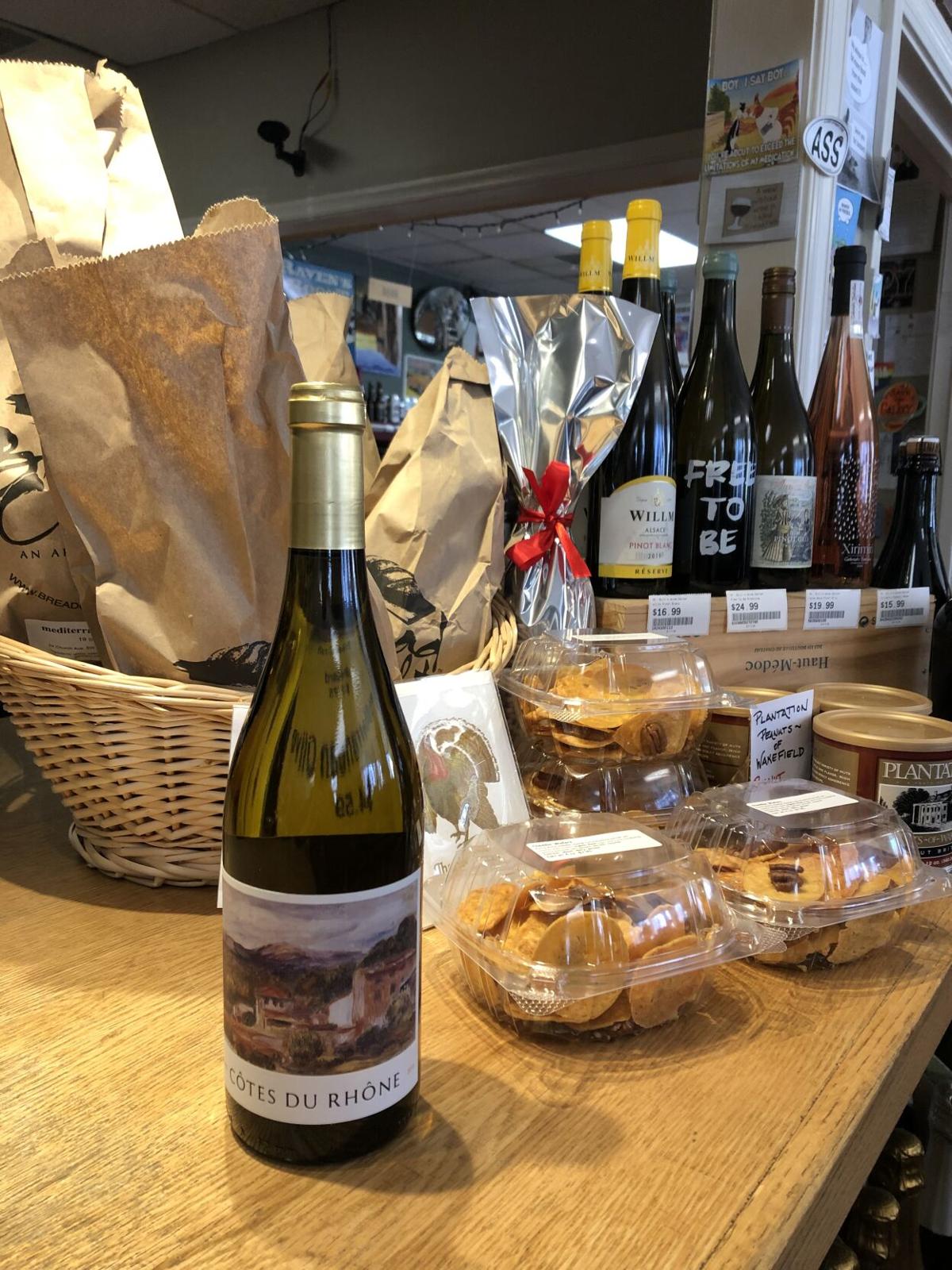 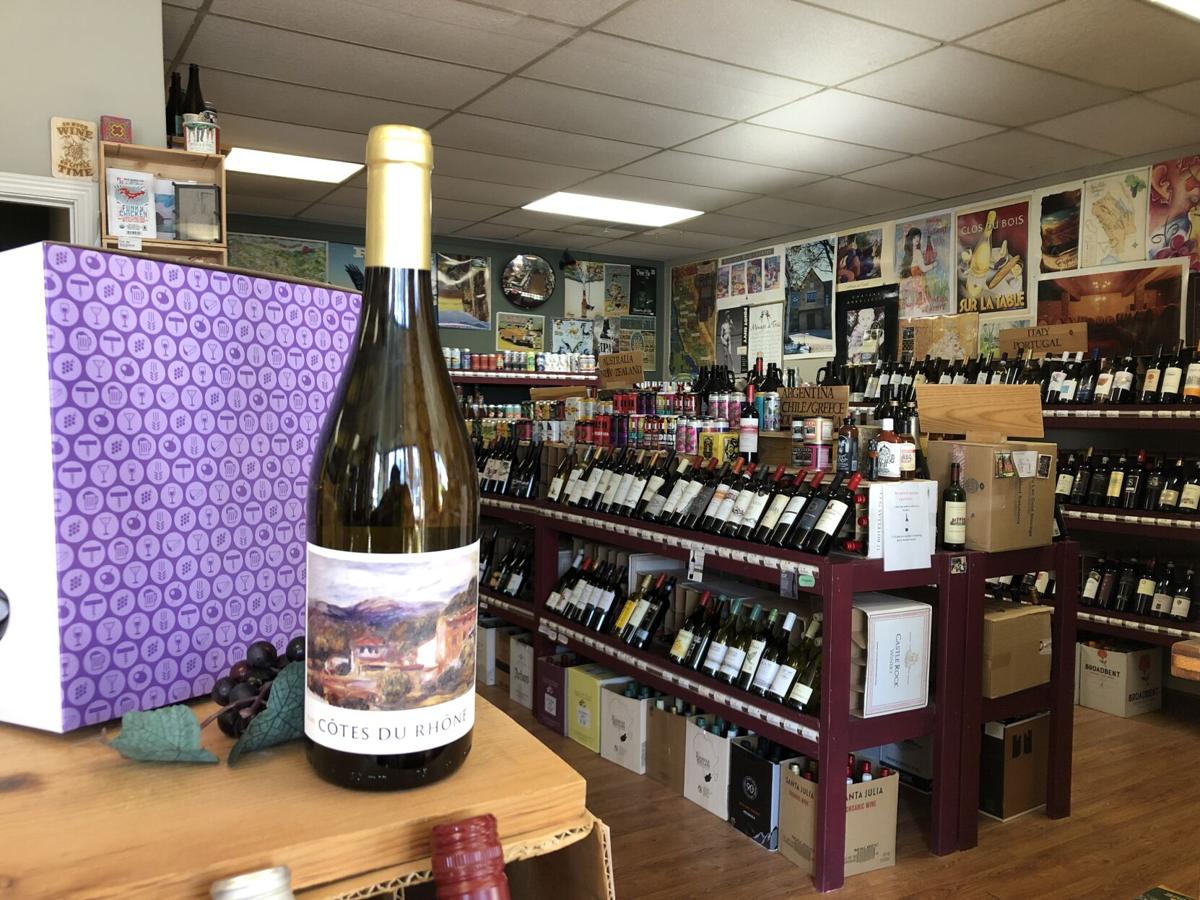 Some years ago, I was unemployed and down on my luck when Thanksgiving rolled around. I joked at the time that my Thanksgiving dinner would consist of a baloney sandwich. What I had in mind was a gourmet quality fried baloney on a croissant with Dijon mustard, garlic aioli, gruyere cheese and arugula. I ultimately had turkey but it was an interesting mental exercise pairing wine with an extravagant baloney sandwich.

Pairing wine with the typical dinner of roast turkey and accoutrements is challenging. The turkey is earthy and smoky, green bean casserole is rich and creamy, dressing is aromatic with spices and cranberry sauce is tangy and sweet. What wine goes with all that?

Consider wines from the southern Rhone Valley of France. These wines are named after their place of origin and are usually composed of grenache, Syrah, Mourvèdre, and other indigenous grapes. The climate is warm, resulting in ripe grapes that produce hedonistic, bold wines that are rich and smooth with notes of plums, raspberries, leather, smoke, tobacco and autumn leaves. There is a prevailing wind, the “Mistral”, that dries out the vineyards and holds pestilence in check. Vineyards are often covered with round stones that soak up and radiate the sun’s heat.

Chateauneuf du Pape is the star of the area, but also generally the most expensive. The name dates back to 1308 when Pope Clement V moved his papacy to the Southern French village of Avignon. Clément’s successor constructed a castle there from which the region derives its name, the New Castle of the Pope. The papacy remained there for 70 years during which time workers planted copious vineyards in the area.

French wines are regulated by the AOC (Appellations d’Origine Contrôlée) system, which was conceived by a Chateauneuf du Pape winemaker. AOC stipulates the varieties of grapes, growing and winemaking methods for specific areas, so the wines behave as one would expect for the area. The Rhone Valley has 17 villages that have earned “Cru” status, meaning they are a top-quality wine named for their home town. Some are obscure and difficult to find in this area.

Gigondas is one standout Cru from a town founded by Romans. Gigondas wine is powerful dense and smooth, with rich notes of black fruits and sometimes traces of saddle leather and musky earth. The wines pair well with the deep, smoky flavors of turkey. The Coat of Arms of Gigondas features William of Orange’s hunting horn and two olive branches in front of a five towered crown. If this emblem is embossed on the bottle, it means the estate grew the grapes and made the wine. In 1971 Gigondas earned its own appellation, making it distinct from the less prestigious Cotes du Rhone. Chateau de Saint Cosme is a fine choice for about $60.

Another worthy Rhone Village is Vacqueyras, which derives its name from the Latin “Vallea Quadreria” meaning “the Valley of Stones”. The vineyard soils are composed of gravel, sand and clay and are drenched with sunlight and ventilated by constant wind. Vacqueyras earned Cru status in 1990. AOC laws stipulate that Vacqueyras must contain at least 50% Grenache, 20% Syrah and Mourvèdre. The wines are considered rustic and flavorful and are noted for a touch of minerality from the soil.

Lirac is one of the most southerly situated of the Rhone Crus, just a short distance from Chateauneuf du Pape. The soils are an alluvial mix of quartz cobblestones and red clay carried down from the Alps, according to vins-rhone.com. The soils drain well and produce powerful wine with potential to age. In the 1600’s Lirac wines were served in the royal court of France and the Village achieved Cru status in 1947. The wine is noted for earthy flavors and notes of black fruit and even black olives, making it an excellent foil for the savory holiday dinner.

If you can’t find the wines above, don’t worry. There is plenty of Cotes du Rhone out there, which are similar. Cotes du Rhone wines earned notoriety in the Middle Ages as a superior wine and, according to rhonea.fr, “In 1737, an edict of the King of France prescribed that all barrels intended for sale and transport must be fire-marked with the letters “C.D.R.” for Côtes du Rhône.” This was to prevent fraud and smuggling. The name means, “slopes of the Rhone” and the wines are warm and rich and usually cost around $15. White Rhone wines are available and usually feature notes of peaches, honeysuckle and minerals in a dry style.

I think my baloney is sauteed to perfection and I am ready to assemble my sandwich. Bon Appetit!

*Prices and availability may vary

This estate has been family owned for five generations and features an educational farm and conservatory orchard. The vineyards are located at the foot of the gigantic rock formation Dentelles de Montmirail. The wine displays a deep crimson color and aromas of black fruits, cake spice, saddle leather and pipe tobacco. On the palate, it is rich and opulent with blackberry flavors and mild tannins enhance the finish. Rivulets of glycerin run down the side of the glass. 14.5% ABV $24

According to the importer, Monsieur Touton Selection, the wine is 100% Syrah. It displays a dark purple red color and has a dense texture. The wine has aromas of blackberries, pepper and saddle leather. On the palate, the wine is rich and smooth with notes of blackberry liqueur and moderate tannins on the finish. The bottle is embossed so you can tell your guests it cost a lot more than you actually paid. 13.5% ABV $15

Ninety Plus Cellars works with wineries all over the world to import good quality wine from competent producers at reasonable prices. The wine is purchased and labeled as Ninety Plus cellars. This Cotes du Rhone is 60% Grenache and 40% Syrah. The wine has a deep red color and aromas of crushed blackberries and black pepper. The palate is warm and smooth with notes of black cherry, leather and spice. A great value, but any Cotes du Rhone you find should be a fine compliment to your dinner. 14.5% ABV $14

A small amount of white wine is produced in Rhone and this blend of Viognier, Grenache Blanc and Roussanne is a crisp example. This cooperative was created in 1952 and today 42 grape growers bring their produce here to be transformed into wine. The wine has a light straw color and bright aromas of honeysuckle, limes and white flowers. The palate is a soft wash of white peaches and honeysuckle nectar, but dry. If you like white wine with your turkey, this beats Chardonnay. 14% ABV $18

PennyWise Episode 39: Easy ways to save money on holiday decorations this year

PennyWise Episode 39: Easy ways to save money on holiday decorations this year

Habits to avoid while being a houseguest

Habits to avoid while being a houseguest

Here's why Ocean Spray cranberry sauce labels are upside down

Perhaps one of the great Thanksgiving mysteries is the cranberry sauce, and not why people eat it: Why are the labels on Ocean Spray cans upside down?

Charcuterie is the word this season

Among the things Roanoke diners are thankful for have been plates emerging from Chef Jeff Farmer’s kitchens. Farmer, who has presided at both …

Primary mating season, aka the “rut,” is on for white-tailed deer.

6 tips for carving a Thanksgiving turkey like a pro

Here's everything you need to know before slicing into that turkey on Thanksgiving Day.

Hitting a holiday party? Be a hero with one of these host gifts

Never worry about showing up empty-handed with these eight crowd-pleasing goodies.

Recall announced for onions due to salmonella outbreak

The CDC is advising consumers to avoid purchasing certain onions due to a salmonella outbreak reported in 38 states and Puerto Rico.