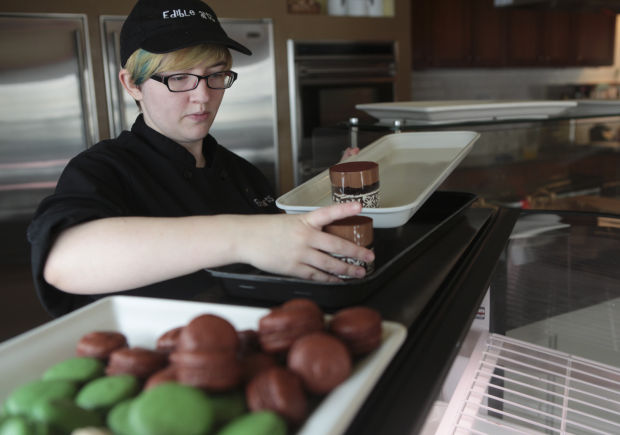 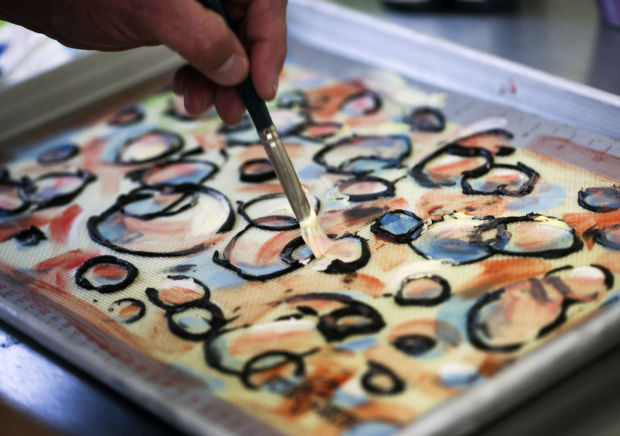 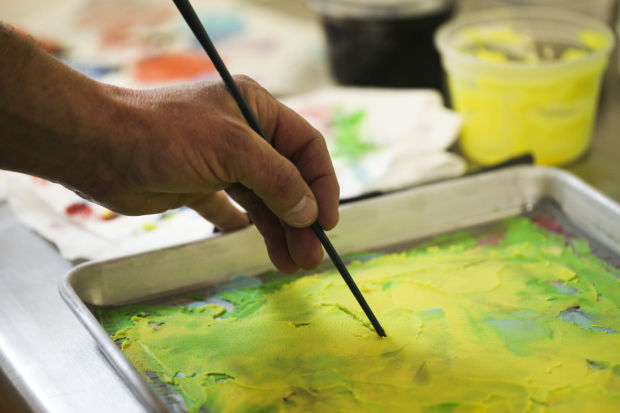 Calvert LaFollette hopes to set himself apart from other bakeries in the area by focusing on cakes and pastries rather than bread. 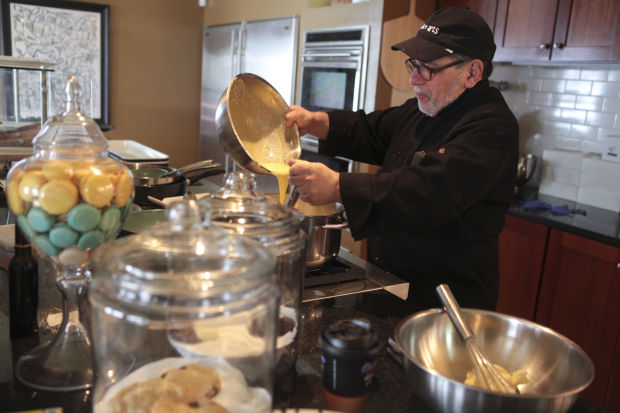 For eight years, Calvert LaFollette was a painter with a dream: to open a bakery.

Then, while driving U.S. 220 into Roanoke one day, he saw a “For Lease” sign he hadn’t noticed before. He pulled in to what was formerly Foodies, near Tanglewood Mall, and had a look around.

He took that sign to be a sign. By the end of the week, the space was his.

“It was like someone handing you a gift,” said LaFollette. “I knew if I didn’t do it, I would have been kicking myself for the rest of my life.”

LaFollette’s gift, Edible Arts, is one in a growing local bakery scene in the Roanoke Valley that includes Bread Craft, Wildflour Bakery, On the Rise, and even more recently, a Roanoke expansion of Blacksburg’s Our Daily Bread Bakery & Bistro.

LaFollette hopes to set himself apart by focusing on cakes and pastries rather than bread, and by marrying his two loves: art and dessert.

“I’m kind of looking at artwork and food in the same light,” he said, wearing a black polo and ball cap both emblazoned with white whimsical lettering, echoing the chalkboard menus that dominate his airy eating space.

“I’m looking at Rodin and I’m thinking: That would be great in chocolate.”

For now, it’s the croissants that are chocolate, and the cookies and some of the tarts. Edible Arts serves breakfast pastries and lunch Tuesday through Saturday, featuring scratch-made cinnamon buns and artisan sandwiches with house-made bread and spreads. But the bakery’s stars are its sweets: jewel-colored macaroons, decadent cakes in tiny, medium and large, melt-in-your mouth eclairs.

“They’re unbelievable,” said repeat customer Robynn Onyett. “This is so far and above anything I have eaten for confections. Ever.” Onyett dropped by on a recent Friday to pick up lunch and a 10-inch carrot cake for a co-worker’s birthday celebration.

LaFollette was a painter and sculptor long before he began creating in flour and eggs. Born and raised in Charleston, W.Va., LaFollette moved to Florida for college and stayed. As an artist, he worked with materials as diverse as pencil and paper, acrylics, and bronze. At one point, he was sculpting using swimming pool floats as molds. At another, he tried painting on sheets of sugar. Eventually, a simmering love of cooking began boiling over into his artist’s studio.

His wife, Carolyn LaFollette, remembers Calvert feeling frustrated with Orlando’s art scene. “I knew cooking was his other love, so I encouraged him to go to cooking school,” she said.

LaFollette signed up at Le Cordon Bleu College of Culinary Arts in Orlando. He later worked at Rosen Shingle Creek resort in pastries, where he learned from the award-winning pastry chef and chocolatier David Ramirez.

In 2009, after discovering Roanoke during family trips to Greenbrier County, W.Va., he and his family decided to move here. LaFollette painted and showed for a while in an art studio on Campbell Avenue and took part in several of Roanoke’s Open Studios Tours out of his south Roanoke home. Edible Arts is his studio now.

LaFollette practiced a technique where he painted with food dye on a silicone mat set in a baking pan, then poured cake batter on top of the art.

That will be evident as well at the Chocolate Festival at Hotel Roanoke this weekend, where Edible Arts will showcase a flourless chocolate cake with a layer of raspberry jam, topped with shards of chocolate “lace” sticking straight out of the cake.

LaFollette said he tested 30 recipes for red velvet cake before deciding on the one he makes for the bakery. Not everything is so meticulously planned, though. The macaroons, one of the bakery’s most visually stunning confections, came about “because we had all these egg whites,” LaFollette said. “We had to ask ourselves: What are we going to do with those?”

LaFollette imagines a future in which Edible Arts hosts a show where all the paintings and sculptures hang from the ceiling and are edible. A customer would wander through, admiring and tasting.

“With [traditional] artwork, there’s a lot longer process. You get to keep it and save it and sell it and it will last,” LaFollette said. With food, he said, smiling, “there’s something very fleeting. There’s instant gratification. That’s attractive.”

This recipe comes courtesy of Calvert LaFollette, owner of Edible Arts. It would be best to weigh ingredients on a food scale to make sure they are the exact amount required.

2. Sift together the flour and confectioners’ sugar. In a stand mixer, whip the egg whites until foamy. Slowly add the fine sugar and whip until stiff peaks form (to the point of over-whipping them).

3. With a spatula, fold the sifted almond flour and confectioners’ sugar into the beaten egg whites a third at a time, adding the extract and color after the first third is integrated. Once you can’t see any flour, stir the batter, pressing it against the side of the bowl about seven times. Place the batter into a piping bag or zipper lock bag.

4. Cut the tip or corner of the bag and pipe the batter in quarter-size mounds onto parchment paper or a silicone baking mat in a pan. Once you have filled the pan, lift it up and slam the pan onto the counter.

5. Let the pan sit at room temperature for about 10 minutes to form a skin on the outside. If the macaroons pull away when lightly touched, let them sit a little longer.

6. Bake for 8 to 15 minutes, depending on your oven. Macaroons should be flat on the top and have little feet (pied) along the bottom. Let dry completely before filling with icing, jam or flavored almond paste.

How to prepare your home for cooler weather

By some estimates more than six million people in this country deal with Alzheimer's Disease.

My mother passed away in late September, and, as often happens, she left behind a houseful of belongings no one really wants. Her children are…

Donation do's and don'ts — plus busting some Goodwill myths

Anything you donate needs to be reusable. Here are some more donation tips and some common misconceptions about Goodwill.

Dadline: Schools in need of substitutes

Kitty Ramsey has a terrific job.

The chemical is in food storage containers, shampoo, makeup, perfume and children's toys. Here are tips to reduce your exposure.

Kary Osmond: This pasta recipe needs only a few ingredients and is easy to master

If you’re looking for a pasta dish that’s comforting and easy to make, look no further.

How to protect yourself against adult bullies

Pet of the Week: Herbert

“Herbert” is a 5-month-old neutered male. This gorgeous boy is great with other cats and loves to be cuddled! Herbert is currently residing at…

Calvert LaFollette hopes to set himself apart from other bakeries in the area by focusing on cakes and pastries rather than bread.