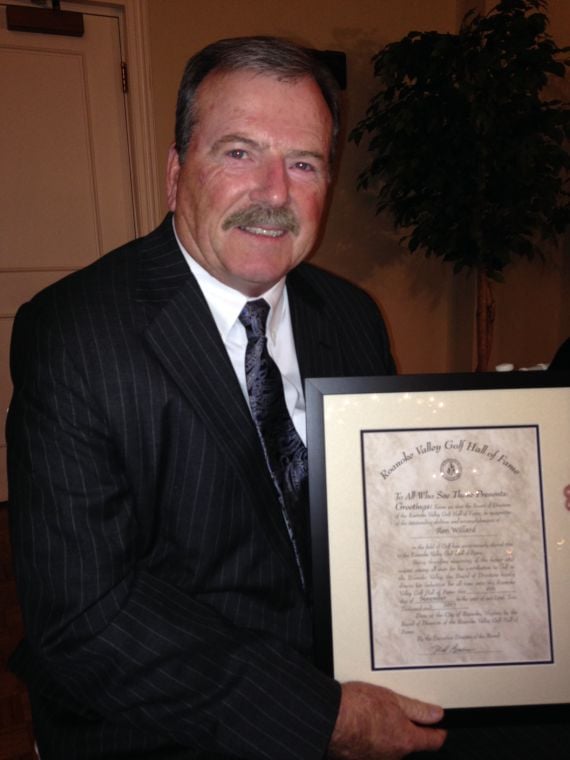 Ron Willard, president of The Willard Companies, was inducted into the Roanoke Valley Golf Hall of Fame on Nov. 6 during a ceremony at Roanoke Country Club.

“It’s truly an honor to join this prestigious group of men and women. I am incredibly humbled,” said Willard, who is the group’s 40th inductee.

The SML developer owns three golf courses at Smith Mountain Lake, including The Water’s Edge, The Waterfront and The Westlake.

Willard is an active member and serves on a number of regional, state and national organizations, including the Ferrum College Board of Directors, the Business Council/Roanoke Economic Development Partnership and W. E. Skelton 4-H Educational and Conference Center’s board of directors.

He is a past president of the SML Regional Chamber of Commerce and is a lifetime director of the National Association Homebuilders.

Willard, who started his company in 1973 at the age of 28, is a native of the area and graduate of Franklin County High School. He has three children, four grandchildren and lives in The Water’s Edge community with his wife, Kris.

The Roanoke Valley Golf Hall of Fame promotes golf in and around Roanoke; sponsors the annual Hall of Fame tournaments; provides annual scholarships; and honors outstanding high school players and coaches each season.

It also administers a points ranking system, presents certificates of merit and inducts members who have made an outstanding contribution to golf in the valley.

How to stop your child from being a fussy eater

How to stop your child from being a fussy eater

How to tell if your hobby is a passion or profession

How to tell if your hobby is a passion or profession

Sneaky daily habits that are silently draining your energy

Sneaky daily habits that are silently draining your energy

Actors and journalists have a lot in common; they follow the truth beginning to end. Actor Michael K. Williams made his name playing Omar Litt…

Pasta e fagioli is easy to make. This recipe scales down the work even more by recommending you use canned beans.

Cornershot: Lessons from the obits page

Lessons from the obits page

15 of the best breweries to visit right now

If you want to create a trip around a great brewery, or are just looking for new breweries to try, here are 15 of the best breweries in the U.S. for 2021.

Squirrel hunting in Virginia for red and gray squirrels runs until February 28.

How to avoid paint color mistakes in your home

Thinking about painting your home? Make sure you choose your colors carefully.

Alpha-Gal, spread by the Lone Star Tick, causes allergy to any meat from a hooved animal.

Underneath all the makeup, who was the real Tammy Faye?

The subject of a new biopic, Tammy Faye was a televangelist icon. But she also represented another side of the evangelical coin — one that was big-hearted, vulnerable and accepting.

Even though autumn begins this Wednesday, the leaves in our region won’t reach peak autumn color for another two to three weeks.