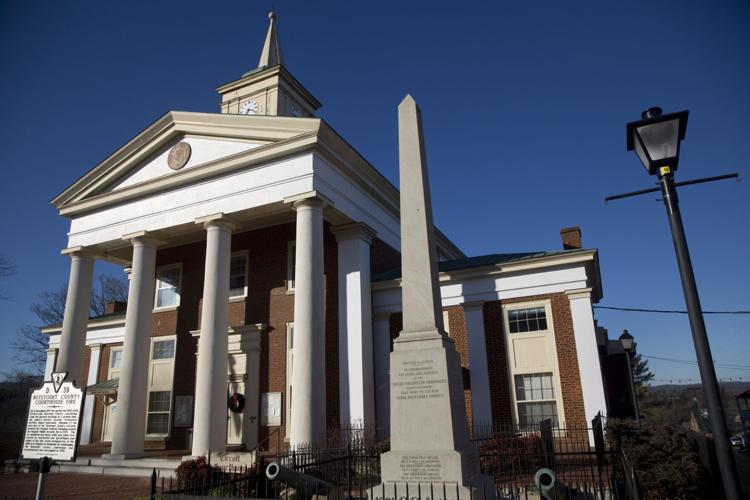 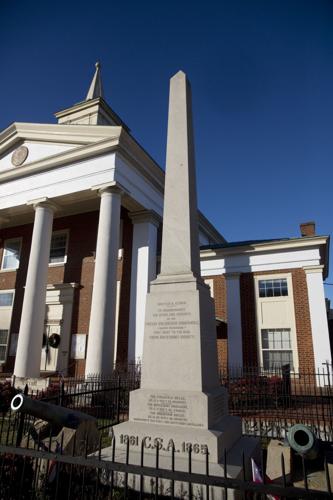 More than 160 Confederate symbols were removed or relocated last year, and 71 of those were in Virginia, according to a report published by the Southern Poverty Law Center.

A Botetourt County committee's recommendation about its own Civil War monument, in front of the county courthouse in Fincastle, might become the next. The county's Monuments and Memorials Committee, formed last summer to address what to do about the Confederate Veterans Monument, is recommending that the county move it to an area behind the courthouse, where it would not loom over minority residents who expect fair treatment in that building.

County residents will get their say on the matter Tuesday, during the board of supervisors' regular meeting. It won't be the first time, though. Other recent board meetings have included public comment times during which multiple speakers have asked the board to leave the monument where it is, or put the matter up for a referendum and let the voters decide the monument's fate.

Amsterdam District Supervisor Steve Clinton, whom the board tasked in July with forming the committee, said legislative action is a better option than a referendum to decide such an issue.

"An outcome that’s workable and fair and equitable for as many people as possible, I think, is the most important thing," Clinton said. "Whether that comes about through something like a referendum or legislative process, that really should be the goal. Bad decisions can come from a lot of sources, but I think the likelihood of an enlightened decision is probably higher in a legislative process than a direct vote. [It might] not necessarily be a popular decision, but it goes back to the idea of the tyranny of the majority. Majority votes aren’t always the best votes, and they can lead to tyranny, especially for the 49% that loses."

The monument, erected in 1904, memorializes the men of 12 Confederate volunteer companies from Botetourt County and the women who supported them during the Civil War and through the “dark Reconstruction years” that followed. Two years before its dedication, Virginia adopted a state constitution that effectively disenfranchised Black people.

Virginia's General Assembly more than a century later passed a law that allowed localities to deal with such markers. It went into effect in July 2020, and later that month, Botetourt County's supervisors looked to find a solution. With input from governmental bodies and civic organizations across the county, the committee seated 14 voting members, with Clinton, the committee's facilitator, and Cody Sexton, assistant to the county administrator, serving as non-voting members. Beginning in September, it held eight public meetings.

During a January presentation to the supervisors, the committee recommended relocating the monument from the "prominent place it occupies" but within the area surrounding the courthouse, which is due for renovation in the near future. With the likelihood that the outdated building will be torn down and replaced, the obelisk will have to be removed, anyway. The question became where it would stand when the courthouse work is through.

A bigger question — of legislative action versus a popular vote on the matter — emerged as county residents registered their opinion in public meetings. One county resident, Jerry Jacobson, spoke on behalf of VFW Post 1841 in Daleville, encouraging supervisors to opt for a referendum and "keep the monkey off your back" regarding re-election. He spoke favorably of Franklin County leaders' decision to put the matter in front of voters. In November, that county was among six in the commonwealth that put their public monuments' respective fates to a referendum.

The voters there acted on the following question: "Shall the County relocate the Confederate statue from County courthouse grounds to a location of appropriate historical significance?" The two choices: yes or no. Seventy percent of voters there opted to leave the statue of a generic Confederate soldier standing in front of the courthouse in Rocky Mount. Franklin County supervisors, who had voted 6-1 to give the question to the public, were not bound by the result but have shown no indication that they might go against it.

None of the other five Virginia counties with similar referendums in November — Halifax, Charles City, Lunenburg, Tazewell and Warren — voted to remove their monuments or statues.

Local and state referendums date to the end of the 1800s, due to a significant mistrust of elite political figures, said Mark Rush, the Stanley D. and Nikki Waxberg Professor of Politics and Law at Washington and Lee University.

"That was due to politics; it was due to the impact of the Industrial Revolution and the creation of this fantastic wealth, so you really began to see a manifestation of class differences," Rush said.

Tension regarding whether people or their leaders should make certain decisions was built into the U.S. Constitution, Rush said. That's what democracy is, he said. Observers can see that tension play out in the recent war memorial issues, as well as in discussions about the electoral college and constitutional amendment processes, he said.

"Fundamentally, the basis of those discussions, even when they get very, very heated, is this ongoing tension at the heart of the democracy between the desire to have the people ultimately rule, but also the desire to have them ruled well by elected officials whom they can hold accountable," he said. "So it goes back to the Gettysburg Address: government of, by and for the people. The three of those things don’t always work hand in hand."

Referendums are no cure-all. In fact, they are as open to corruption as anything an elected body might decide, Rush said.

"There is a myth that a referendum initiative truly represents the will of the people," he said. "You will find that no matter what the issue, there will be a tremendous amount of advertising and political literature and information floating around that is generated by moneyed interests on both sides, and public opinion is swayed by this. It’s the voice of the majority … but it’s also the voice of whoever is most effectively capable of swaying public opinion.

That's what the Botetourt County monument group worked to fashion in its deliberations, Clinton said. On Tuesday, after hearing from the public, the supervisors will do what they were elected to do — make the final decision, Clinton said.

It was clear that a referendum in Botetourt County would have ended with the same result that Franklin County and the other localities got, but it wouldn't have taken into account the viewpoints of minority residents, he said.

"If you go with a referendum … the outcome can be pretty damaging to the harmony of the community, and the resentment and the anger is directed internally toward our neighbors, instead of externally to the people we voted for, that we elected," Clinton said. "To me, the referendum fails on the idea of research, deliberation and careful consideration and understanding of the issues. Probably an elected body is going to be more capable in that respect, and they’re also obligated to do that. The public doesn’t have to go into a referendum with any knowledge. It’s an emotional vote.

"I’ve read something to the effect that … 51% of the people can rain on the parade of 49% of the people any time they want. And I think government needs to make sure that doesn’t happen."

Clinton, a Republican who announced recently that he is running for re-election to his seat, said he is not concerned about how his participation or decisions will affect him at the polls in November.

Rush, the Washington and Lee professor, said that the matter comes down to trust between office-holders and constituents.

"As long as they don’t disagree with you all the time, you ought to survive, if you’re a good member of the government," Rush said. "Do you trust your elected officials or don’t you? Do you decide that one issue will make or break your trust in them? These are the risks one takes when making difficult decisions, and ultimately you are accountable to the people, but at least there is that accountability built into the electoral process."

A referendum, though, will always cater to a voting majority, regardless of how well- or ill-informed it may be, he said.

"That’s what’s at stake," Rush said. "It takes courage sometimes to speak up for a minority when you know that a majority is what puts you in office and keeps you there."

Botetourt County Board of Supervisors

Tad Dickens is the features editor for The Roanoke Times.

A Vinton man threatened to kill local government officials on July 21, and an emergency substantial risk order was filed against him the next day. He surrendered four handguns and a shotgun to law enforcement.

“The defendant’s conduct served only to advance the mob’s progress toward the building,” prosecutors wrote. Thomas "T.J." Robertson had no comment to the judge before he was led away in chains.

One suspect was taken into custody early Friday morning. Police believe there are no additional suspects and there is no current danger to the community.

CASEY: Is 8 years in prison enough for this Jan. 6 insurrectionist?

Former police officer Thomas Robertson knew the law, and violated it repeatedly, both at the Jan. 6 insurrection and following his arrest on federal charges. That's why prosecutors are asking for a stiff term of incarceration.

A couple of interesting economic development initiatives are taking shape in Carroll and Grayson counties. The unsexy one is for a regional slaughterhouse that would give farmers much easier access to marketing their livestock. The other, which sounds like science fiction, could create biosecure farms where disease-free animals are raised for their organs, for future transplantation into humans.

Jacob Fracker's testimony against his colleague, who played a larger role in the insurrection, was cited by federal prosecutors.

Gas prices fall below $4 per gallon

Gas prices fall below $4 per gallon