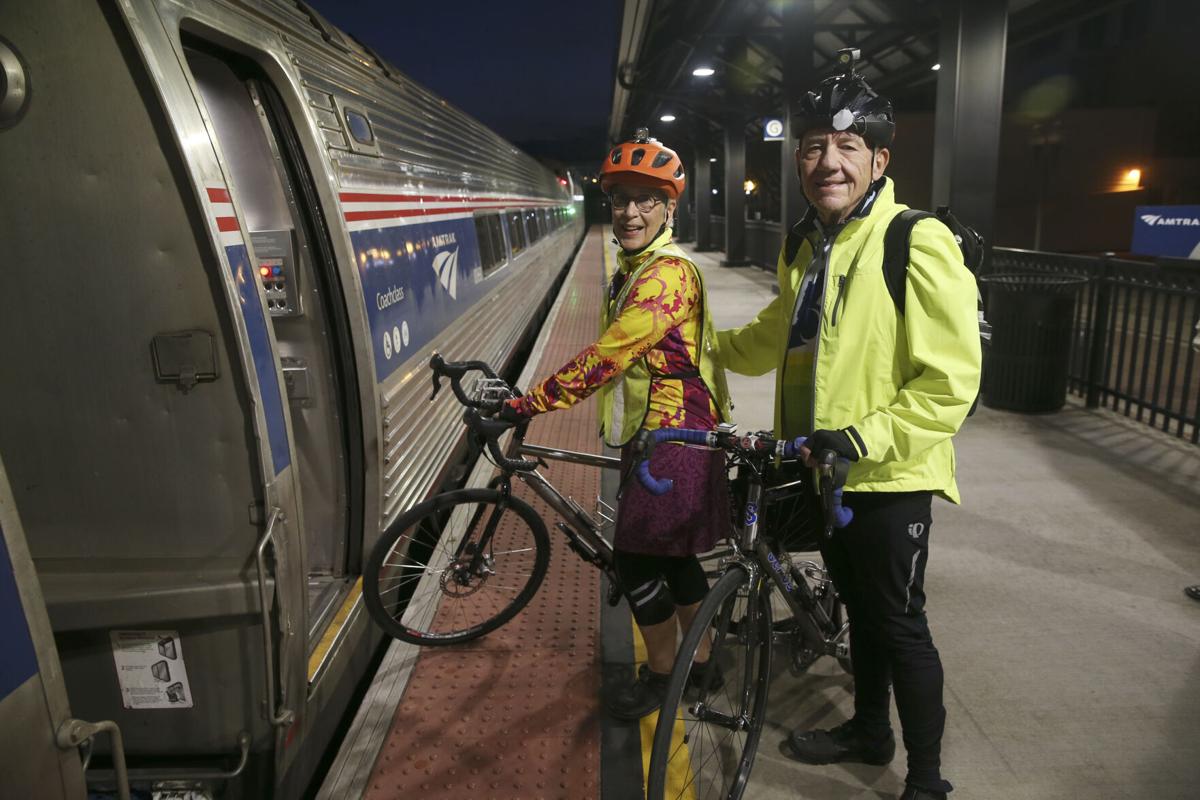 Barbara and Gary Duerk are pictured just before wheeling their bicycles onto an Amtrak train in Roanoke Wednesday morning. The occasion marks the first time a bike has been allowed on Amtrak in Roanoke since train service resumed in 2017. The couple is celebrating Gary's 75th birthday with a ride on the Mount Vernon trail to George Washington's grave. 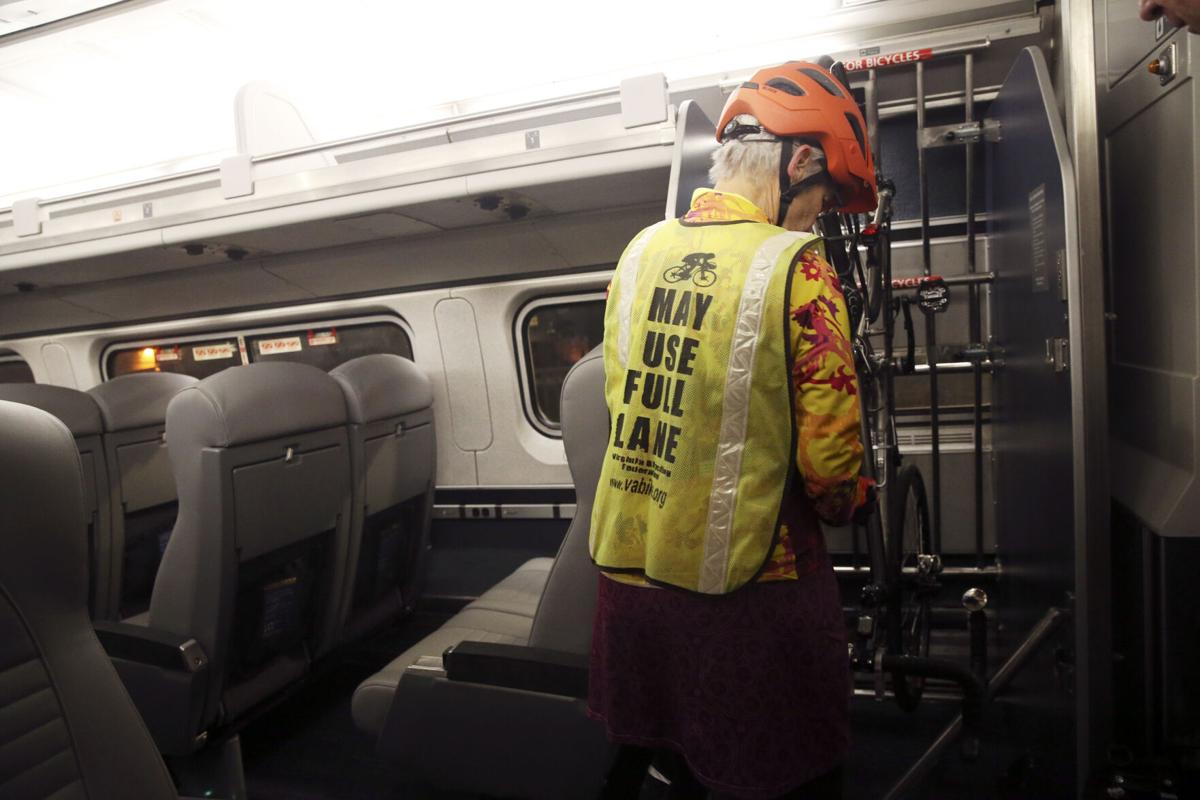 Barbara Duerk adds her bike to the rack on the Amtrak train in Roanoke on Wednesday morning. Marking the first time a bike has been allowed on Amtrak in Roanoke since train service resumed in 2017. 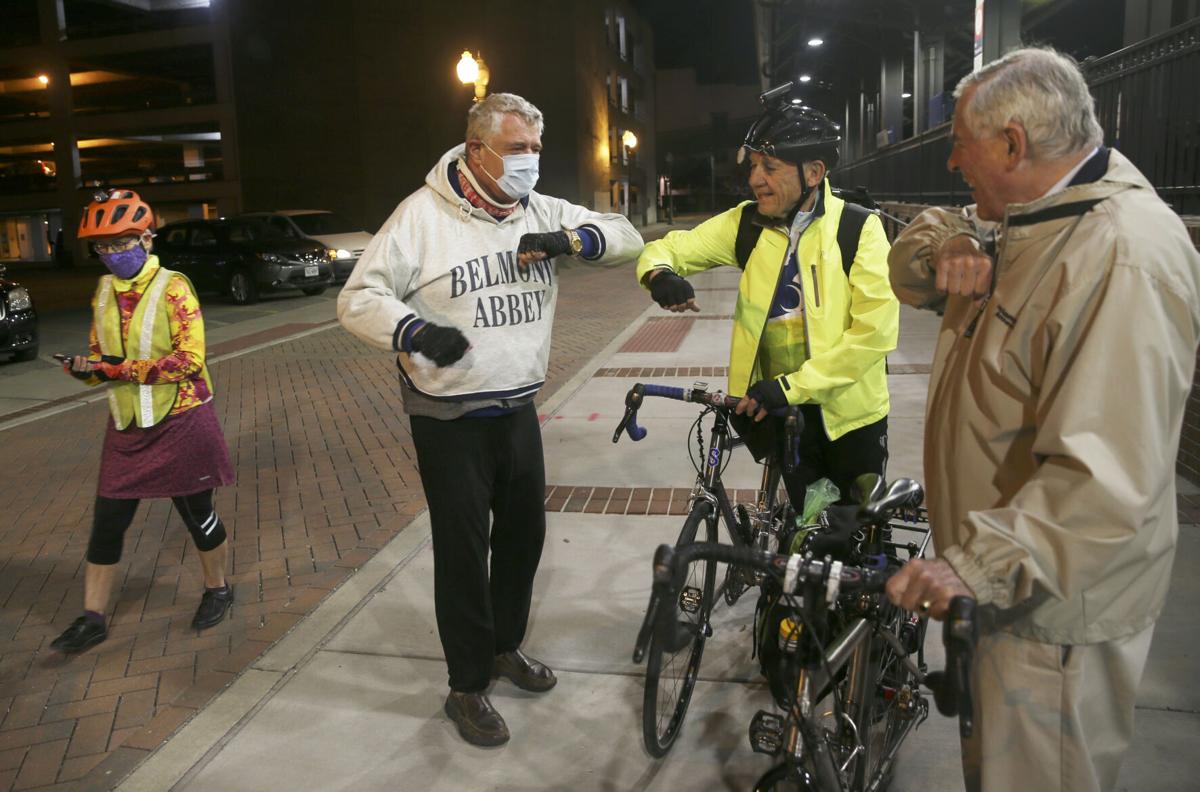 Former Roanoke Mayor David Bowers elbow-bumps Gary Duerk and then State Sen. John Edwards as Barbara Duerk, far left, positions to take pictures Wednesday morning before she and her husband loaded their bikes onto the Amtrak train in Roanoke. 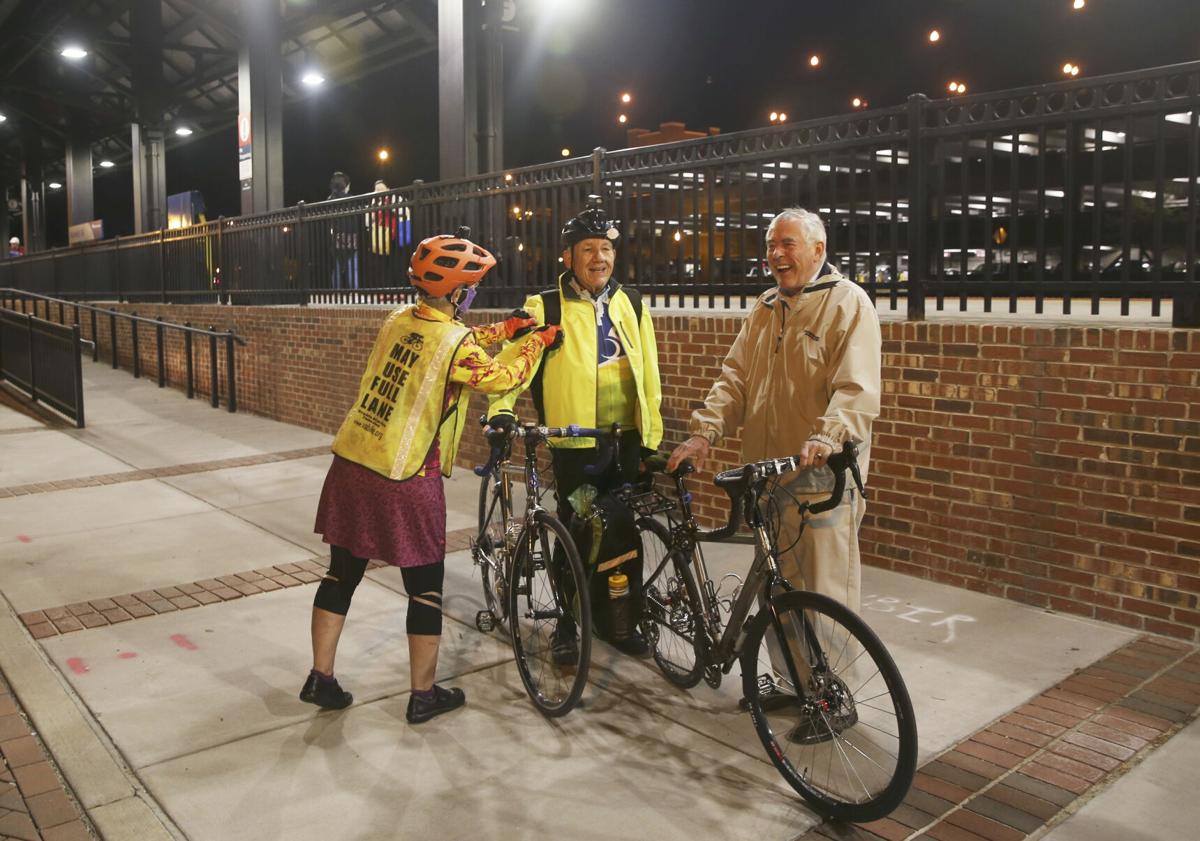 Barbara and Gary Duerk take pictures Wednesday morning with State Sen. John Edwards, who arrived to see the couple wheel their bikes on the Amtrak train, marking the first time a bike has been allowed on Amtrak in Roanoke since train service resumed in 2017.

Late Wednesday, the Virginia Department of Rail and Public Transportation changed the launch date of its bikes-on-trains program to May 1. This article has been update to reflect that.

You probably missed a couple of remarkable events Wednesday before sunrise in Roanoke. One was, Gary Duerk turned 75 — more about his atypical birthday plans below.

The second occurred just off Salem Avenue between First and Second streets downtown about 6 a.m. Shortly after Duerk and his wife, Barbara, arrived on their bicycles at Roanoke’s Amtrak platform, they dismounted and pushed them onto a passenger train.

That was a milestone — those were the first wheeled-on bikes ever in a Northeast Regional passenger car in Virginia. They won’t be the last. Beginning next month, it’ll occur throughout the commonwealth.

It’s a service Barbara Duerk and other Virginia bicycle advocates have been advocating for going back at least a decade. It will be expanded to other regional trains in Virginia beginning May 1, according to the DRPT.

Amtrak has been carrying bicycles on longer-route passenger trains for decades. In the early 1980s, I checked my bike as luggage at Amtrak stations in Washington, D.C., Boston, New Haven and Montreal on my way to or from various bike adventures.

The bikes had to be boxed, and Amtrak sold inexpensive cardboard containers to cyclists who didn’t have a box. Even then, though, to fit the bikes inside, cyclists often had to use specialized wrenches to loosen and twist the handlebars, and remove both pedals. Once packed, the boxed bikes were stored to a baggage car.

Regional trains have been a very different story, however. Many of them operate with no baggage car, and visit stations where no baggage-handling services are offered. Roanoke is among the latter.

Under either of those conditions, bikes were precluded from Amtrak in Virginia. The lone exception (since 2018) was at the Main Street Station in Richmond, which is near the western terminus of the 52-mile Virginia Capital Trail to Williamsburg.

That was a pilot project spearheaded by Champe Burnley, who until last year spent a decade as president of the Virginia Bicycling Federation.

Burnley’s efforts to get bikes allowed on regional trains date back to before 2011.

“What a long strange trip it’s been,” he told me Tuesday.

In 2013, Burnley visited Portland, Oregon, and was shocked to discover that roll-on bikes were allowed on passenger cars for the Amtrak Cascades, a heavily traveled passenger route in the Pacific Northwest. Amtrak had outfitted those passenger cars with special vertical racks to accommodate bikes.

Upon his return to Virginia, Burnley wrote a letter to Amtrak’s then-president Joseph Boardman.

“If bikes can be rolled on Amtrak trains on the West Coast, why can’t trains on the East Coast be retrofitted with similar racks?” Burnley asked.

He sent copies to the U.S. secretary of transportation and 24 U.S. senators representing Eastern states from North Carolina to Maine.

That October, Amtrak invited Burnley and two other VBF board members on a test run of roll-on service on the Capitol Limited. They got on with bikes in Harpers Ferry, West Virginia and rode the train to Washington.

The following month, Amtrak announced a national task force to explore the potential of such a service. Ultimately, Amtrak developed a policy that allowed bikes to be checked on any trains with baggage cars at stations that offered baggage service.

Meanwhile, in May 2016, Barbara Duerk persuaded the Roanoke City Council to adopt a resolution calling for roll-on and -off bike service when Roanoke’s Amtrak resumed in 2017.

Although the platform in Roanoke was raised to accommodate cyclists and people who use wheelchairs, the DRPT wasn’t ready to allow roll-on bikes in passenger cars on regional trains.

Duerk, who used to serve on the Roanoke Planning Commission, has had her fingers firmly planted in just about every bicycle-related initiative in the Roanoke region for the past quarter century.

Those include Roanoke police on bikes, bike racks on Valley Metro buses, the Mayor’s bike ride, bicycle-friendly decals for businesses and more.

It’s probably fair to say that without her dogged advocacy, the Lick Run Greenway wouldn’t today connect to Valley View Mall. In the 1990s, she was indefatigable in urging the council to route the greenway on a new highway overpass above Interstate 581. I covered Roanoke city hall back then.

In 2018, Burnley and others participated in another test of roll-off bikes at the Main Street Station in Richmond, and DRPT made that non-baggage service station the only exception to its no-bikes policy.

Then last September, Burnley learned from the big advocacy organization Adventure Cycling that Amtrak had retrofitted all its passenger cars on regional routes with in-car vertical bike racks that would accommodate two or four bikes.

“But DRPT had chosen not to offer this service in Virginia,” Burnley said.

The bicyclists ramped up pressure. And when Barbara Duerk learned the agency would begin roll-on bike service (with advance registration) on all its passenger trains in May, she sought and obtained special permission for her and Gary to roll their bikes onto the train Wednesday as a demonstration, nearly three weeks early.

Joining the Duerks on the platform Wednesday morning were state Sen. John Edwards, D-Roanoke, and David Bowers, the former mayor. They were among the most ardent backers of Amtrak resuming its service in Roanoke. Edwards also helped the Duerks get permission for Wednesday’s event.

Haley Glynn, a spokeswoman for the DRPT, said roll-on service will be available via advance ticket purchase beginning on May 3. Amtrak will charge $20 extra for bikes each way, she said. The bicyclists have to be able to remove their front wheels, and lift their bikes to shoulder height. The service is not allowed for recumbent bikes.

And now for a bit of elaboration on Gary Duerk’s birthday plans. Key to that was his military service during the Vietnam War, when he was fresh out of college.

From a fellow member in the Roanoke Kiwanis Club, Gary Duerk learned of a special ceremony offered to military veterans by Mount Vernon, George Washington’s Northern Virginia estate. By advance appointment, they’re able to recite Washington’s 1783 Prayer for the Nation as Mount Vernon personnel lay a wreath on the first president’s grave.

So Thursday morning, the couple plan to ride their bikes from their hotel along a bike path to Mount Vernon, a distance less than 10 miles. They’ll pay the typical visitors fee, and Gary Duerk will recite that prayer at Washington’s grave. Here it is:

“I now make it my earnest prayer, that God would have the United States in his holy protection, that he would incline the hearts of the Citizens to cultivate a spirit of subordination and obedience to Government, to entertain a brotherly affection and love for one another, for their fellow citizens of the United States at large, and particularly for their brethren who have served in the Field, and finally, that he would most graciously be pleased to dispose us all, to do Justice, to love mercy, and to demean ourselves with that Charity, humility and pacific temper of mind, which were the Characteristicks of the Devine Author of our blessed Religion, and without an humble imitation of whose example in these things, we can never hope to be a happy Nation.”

It sounds quite relevant to today, eh?

Pentagon on lockdown after shooting near Metro stop

Pentagon on lockdown after shooting near Metro stop

A Virginia woman opened sanctuary for elderly Border Collies in Gloucester County. Then her neighbors sued.

Most of the dogs are old and most are ailing, some with a dire combination of diseases and diagnoses that leave them not long for this world.

300,000 gallons of raw sewage leaks into James River near Richmond

People and pets should avoid swimming, wading and tubing in the James River beginning today, says the Virginia Department of Health.

A board majority decided not to side with advice from its own administration.

Barbara and Gary Duerk are pictured just before wheeling their bicycles onto an Amtrak train in Roanoke Wednesday morning. The occasion marks the first time a bike has been allowed on Amtrak in Roanoke since train service resumed in 2017. The couple is celebrating Gary's 75th birthday with a ride on the Mount Vernon trail to George Washington's grave.

Barbara Duerk adds her bike to the rack on the Amtrak train in Roanoke on Wednesday morning. Marking the first time a bike has been allowed on Amtrak in Roanoke since train service resumed in 2017.

Former Roanoke Mayor David Bowers elbow-bumps Gary Duerk and then State Sen. John Edwards as Barbara Duerk, far left, positions to take pictures Wednesday morning before she and her husband loaded their bikes onto the Amtrak train in Roanoke.

Barbara and Gary Duerk take pictures Wednesday morning with State Sen. John Edwards, who arrived to see the couple wheel their bikes on the Amtrak train, marking the first time a bike has been allowed on Amtrak in Roanoke since train service resumed in 2017.