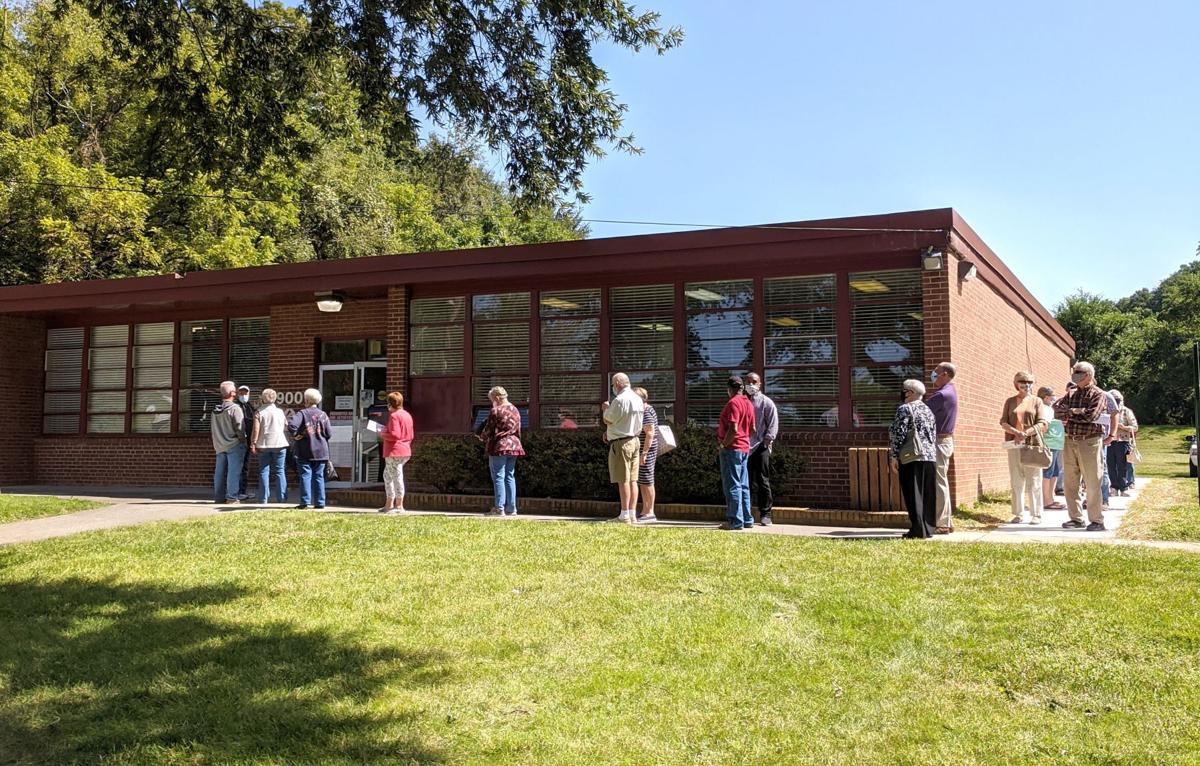 Roanoke County voters line up outside the Craig Center in Vinton for early voting Tuesday afternoon. 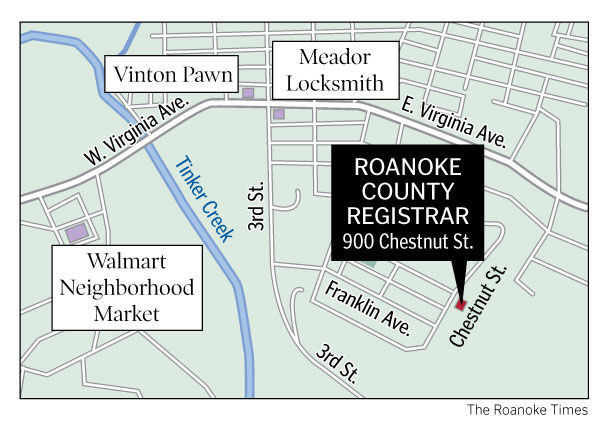 The Aramark location in Vinton provides uniform services. An earlier version of this column incorrectly described the company's business.

Let’s assume you live in the Hollins area of Roanoke County and you want to vote early in November’s presidential election.

That used to be easy. You’d drive south down Interstate 581, get off at the Tanglewood exit and make your way to the Roanoke County Administration Building. It’s a quick left just off Electric Road past Tanglewood Mall.

The registrar’s office was on the third floor, squeezed among human resources, accounting and finance, and a health clinic for county employees. Getting there was pretty boring, though, because the roads were all relatively familiar major arteries.

This year, the county quietly moved the office to Vinton. As a result, that journey is now much more exciting.

Instead of Electric Road, you’ll be getting off I-581 at eastbound Elm Avenue. You may notice that the name of the street changes almost immediately to Bullitt Avenue Southeast. No worries. You’re still on the right track.

At that point, the street name changes yet again, this time to West Virginia Avenue. Forget about it. Keep on going another 1,000 feet, to the second traffic light after the creek. (Before that, you may see a big, lighted temporary sign directing early voters to make the right.)

Anyway, at the second light past the creek, hang a right on Third Street. It’s more or less across West Virginia Avenue from Vinton Pawn. As you cut that turn, you might notice the sign for Meador & Co. locksmiths.

Drive down Third Street for about 1,500 feet. Watch for some small blue directional arrows. On the left you’ll pass the Magnets USA factory, then another building for Aramark. Take the fifth left onto Franklin Avenue. The Vinton Public Works building stands at that corner. You’re getting close!

Follow Franklin Avenue four blocks, past about 20 small but tidy homes. When Franklin ends in a T-intersection with Chestnut Street, take a left.

The Craig Center — a former elementary school that later was a recreation center — will be on your right. It’s nine blocks — and slightly less than a mile — off Elm/Bullitt/Dale/West Virginia Avenue. By Wednesday afternoon, more than 2,075 had found the place and cast ballots there, Registrar Anna Cloeter said.

When I arrived, I was elated. I’ve lived in the Roanoke Valley for 26 years, and driven or bicycled into most of its nooks and crannies. But this was a new destination. It’s another notch in my valley-geography belt!

Not everyone feels that same sense of excitement, however. Take Pat Ebbett, who recently sent me this email.

“I am a Roanoke County resident (Hollins area) and am thinking about voting early. So I decided to find the new board of elections [location]. Has anyone else tried to find it?

“Could they possibly have found a more obscure location — in a small, quiet side street dead end well off a main street? ... Surely they could have achieved that in an easier to find location! Unless of course not making it convenient was the idea. And the small blue directional signs aren’t exactly great either. Just curious.”

It’s an interesting question because there are plenty of less-obscure locations. Like the Catawba Community Center.

That’s easily viewable from Virginia 311 — after you climb, then descend Catawba Mountain, of course. The county owns that building, too. Or, they could have hauled a temporary trailer up to the top of Roanoke Mountain, just off the Blue Ridge Parkway. That would have been easier to find as well.

Anyway, I put the question to Supervisor Paul Mahoney, a Republican who represents the Cave Spring District. And basically, he told me the following.

The pandemic hit the United States this year shortly after the Virginia General Assembly had expanded early voting in Virginia. That by itself suggested many, many more voters would be visiting the elections office, where space already was cramped.

Adding the pandemic to the equation seemed intolerable. It risked exposing county workers — and everyone they came in contact with — to the virus. So just about everyone agreed the office should be moved.

Some supervisors suggested county library branches. But those (a) were closed because of the pandemic, and (b) would have to be staffed, which (c) would require increasing the Board of Elections’ budget. And the Hollins branch library, which is older, doesn’t have a layout that’s easily amenable to pandemic voting, Mahoney said.

Supervisors also knew that wherever they placed the office would be at least somewhat inconvenient for most voters. That’s because Roanoke County is shaped like a doughnut, with the city of Roanoke in the center.

But “in March, the Brambleton Center was not available,” Mahoney said. “It would have taken more renovations. The county administrator [Dan O’Donnell] had a rough recommendation to make.”

O’Donnell (who I couldn’t reach for comment on Wednesday) ultimately recommended the Craig Center for a few reasons, Mahoney said.

First, the county already owned the building. Second, it was already compliant with the Americans with Disabilities Act, so there would be no accessibility issues. Third, the Board of Elections already was using the Craig Center for storage of voting machines and ballots. Finally, the location allows for much more space than the Board of Elections office had previously.

But Mahoney said Ebbett’s point is well taken. It’s an issue he’s heard about from a handful of constituents, he added.

Currently, the county is planning to open another early-voting office in the Brambleton Center, which should be operating during the last two weeks of October.

And what about next year’s gubernatorial and legislative elections? What if the pandemic hasn’t subsided (or been tamed) by then?

It’s possible, Mahoney said, that the county may offer more widespread early voting locations next November, if the registrar’s office is beefed up with more employees to staff those locations. But that’s probably a question for January.

“We’ve got to think about that in the future,” he said. “Right now everybody’s focused on Nov. 3.”

5 hurt, including 3 JMU students, in blast at Harrisonburg shopping center near 10-mile race

At least 5 people, including 3 college students, were injured Saturday morning by an explosion at a shopping center in Harrisonburg, according to officials at James Madison University.

Actor Sam Elliott lent his voice to a Joe Biden campaign video that aired during the World Series Tuesday and became a Twitter magnet. See the ad and responses to it.

Roanoke County voters line up outside the Craig Center in Vinton for early voting Tuesday afternoon.