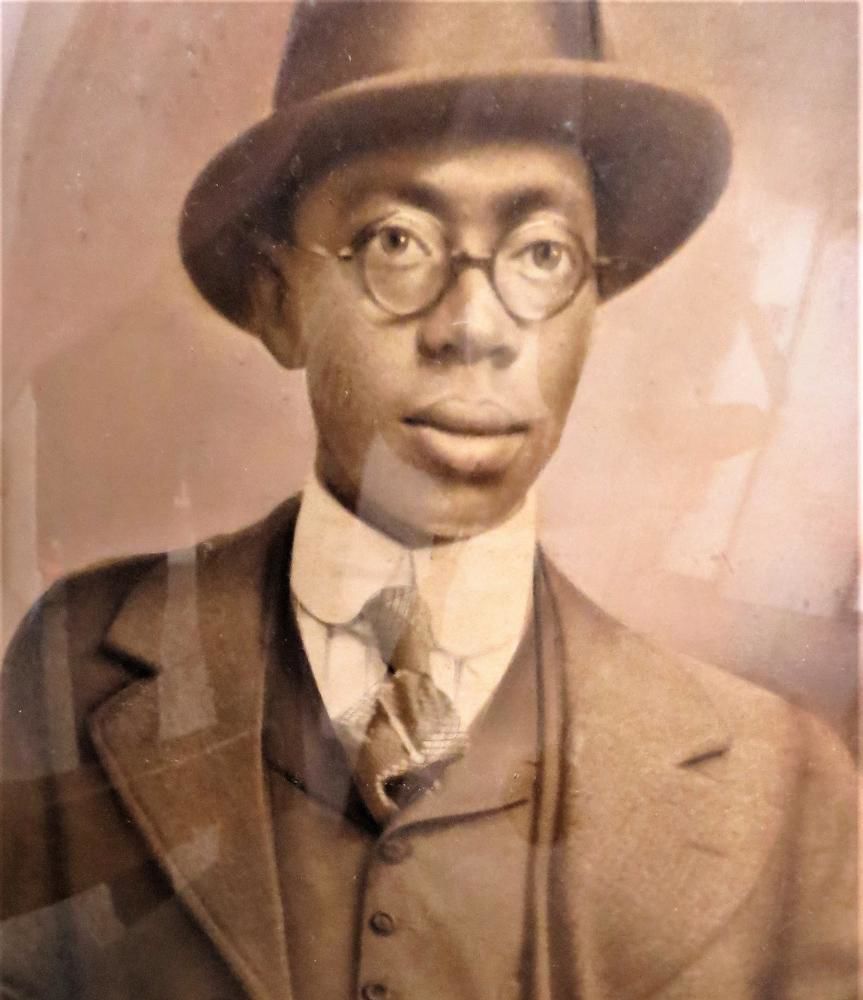 Harrison Wright, a Roanoke County native and U.S. Army Corporal, died of wounds he sustained fighting in France in 1918, about a month before the end of World War I. Some students at Glenvar High School have been researching his inclusion on a list of “colored” soldiers on a WWI memorial in Salem. 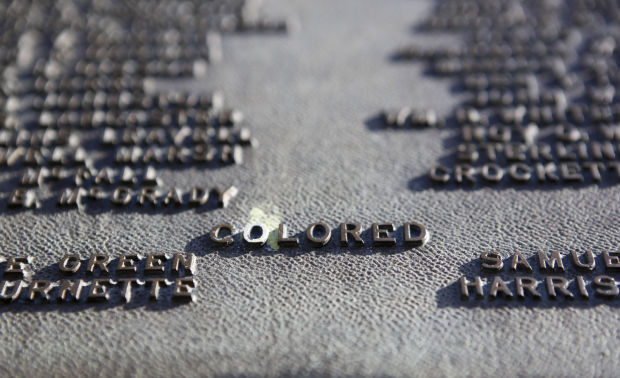 A monument in Salem lists 35 Roanoke County service members who died in World War I, but includes a “colored” category. 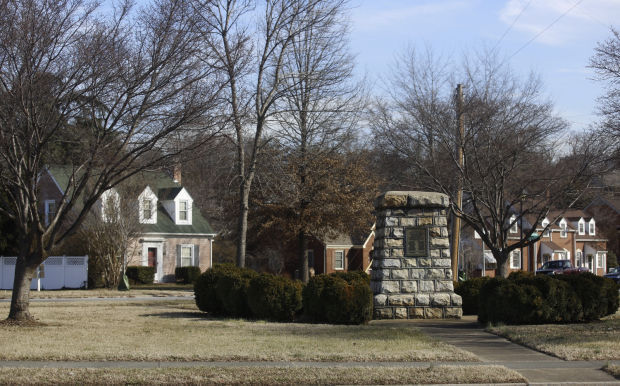 The World War I memorial stands on an out-of-the-way, triangle-shaped traffic island in a residential section of south Salem. It lists 35 Roanoke County service members who died in World War I, including four denoted as “colored.”

Harrison Wright, a Roanoke County native and U.S. Army Corporal, died of wounds he sustained fighting in France in 1918, about a month before the end of World War I. Some students at Glenvar High School have been researching his inclusion on a list of “colored” soldiers on a WWI memorial in Salem.

A monument in Salem lists 35 Roanoke County service members who died in World War I, but includes a “colored” category.

The World War I memorial stands on an out-of-the-way, triangle-shaped traffic island in a residential section of south Salem. It lists 35 Roanoke County service members who died in World War I, including four denoted as “colored.”

Right about this time last year, I told you about a group of Glenvar High School students and their curiosity about four soldiers whose names are on an obscure World War I monument in south Salem. It stands on a traffic island bordered by Roanoke Boulevard, South College Avenue and East 2nd Street.

AP history students Will Stacy and Noah Willard asked me for more information about Robert Lee Green, Harrison Wright, Patrick Journette and Samuel Pasley. Each of the men fought and died during the “Great War.”

They’re listed under the heading “colored” on a monument that includes 31 other — presumably white — soldiers from Roanoke County who lost their lives in the same conflict.

I put the students’ questions to readers. Four quickly responded with leads. (Thank you, Wanda Carter and Pam Kirchner of Roanoke; Nancy Pace of Salem; and former Roanoker Sue Brown Lilly from St. Louis.) The information chase continued through the spring semester and summer.

Now it’s a full year later. Stacy and Willard are seniors and no longer are in history teacher Neil Swanson’s class. But about a dozen Glenvar students still are chasing the project, and they’ve come up with an interesting twist, according to Swanson.

It appears Wright is eligible for a Purple Heart. The students and Swanson tried to apply for one on his behalf but so far they’ve struck out. They’re looking for relatives of Wright who could continue the medal quest.

Finding one is not going to be easy. Wright never married and has no known descendants, Swanson said. Wright had a sister, but her trail ends in Springfield, Massachusetts. Swanson hopes Wright’s sister had descendants and he has a great-great nephew or niece somewhere.

“The classes did some really great research and found out some very interesting things,” the teacher told me in an email Thursday. On the phone Friday, he added: “But right now we’re at a standstill.”

Here’s what they’ve found so far:

Green, Journette and Pasley all died from the Spanish flu, a 1918 pandemic that was unusually deadly and killed soldiers on both sides of the war. The flu infected about 500 million people and killed at least 50 million worldwide.

Among the historical nuggets the students uncovered were two Robert Lee Greens. Both were black, both worked for the railroad in Roanoke County and both fought and died in World War I, Swanson said. One was from Luray and the other was from Alleghany County. One was born in the 1880s and the other in the 1890s.

The students still aren’t sure which Robert Lee Green was noted on the monument, Swanson said.

“That’s the kind of stuff the kids enjoyed,” he said. “The whole mystery of the thing.”

Wright did not succumb to the flu. He perished from battlefield wounds sustained Oct. 9, 1918, during the Meuse-Argonne Offensive. By then he’d been promoted to corporal, Swanson said.

The Meuse-Argonne Offensive began Sept. 26, 1918, and was World War I’s final chapter. It involved 1.2 million American troops. In 47 days of fighting, 26,277 American soldiers died — roughly 10,000 more than the number of U.S. troops killed during the invasion of Normandy in World War II.

Wright “is buried in the Meuse-Argonne American Cemetery alongside other American soldiers where he is not separated by race — unlike his name on the plaque on the World War I memorial in Salem,” Swanson told me.

Swanson said that prompted students to look into whether Wright had been awarded any posthumous medals. Looking back, it appeared he was eligible for a Purple Heart.

The modern-day version of that medal didn’t exist until 1932. However, it may be awarded retroactively for battlefield deaths or injuries sustained after April 5, 1917. In 2009, National Geographic magazine estimated that 320,518 Purple Hearts had been awarded to World War I soldiers killed or wounded during battle.

Working with the U.S. Army and the National Archives and Records Administration and on Ancestry.com, Swanson said the students determined no such award had been made to Wright.

“Once I found out he was eligible, I said, ‘Let’s get this ball rolling,’ ” Swanson told me. Student Kyra King picked it up and sought assistance from the office of U.S. Rep. Morgan Griffth, R-Salem. Griffith’s office contacted the Awards and Decorations Branch of the U.S. Army’s Human Resources Command.

Unfortunately that’s where the standstill is now.

In September, Griffith received a letter from Lt. Col. Christopher Moore, chief of that branch.

“Upon review of the provided information, documentation and historical records available to this office, we acknowledge Corporal Wright would have been entitled to the Purple Heart based on the War Department General Order … authorizing the award retroactive to soldiers who served during World War I,” Moore wrote. But “we have no way of knowing if the next of kin of Corporal Wright ever pursued the posthumous award of the Purple Heart on his behalf.”

That is a hitch, because under Army regulations only next of kin can apply for posthumous military decorations, Moore’s letter noted. Moreover, the 1974 Privacy Act forbids the Army from disclosing details about Wright — or whether it has information about his relatives — to Swanson or his students.

“Harrison did not marry, nor did he have any children,” Swanson said. “What is known is that he had one sister, Laura, who moved with him to Springfield, Massachusetts, in 1916. This is where the trail ends.”

So the students are looking for living relations to Laura Wright, who moved from Roanoke County to Massachusetts 103 years ago and who, for all we know, married and changed her surname. That sounds like a daunting task. A needle in a haystack might be easier to find.

The students are unsure whether Laura Wright was older or younger than her brother Harrison. Apparently she was born in Roanoke County.

The only other detail they uncovered about Laura was that after the war she made a trip to France to visit her brother’s grave. That was a Gold Star Pilgrimage, a federal government program that paid travel expenses for one next of kin of killed soldiers, Swanson said.

But Swanson suspects there’s more information out there, and there are some history or genealogical sleuths who might be able to help his students once again.

Are you one of them?

“We received some really great information from your readers last year about where to find information” about Green, Wright, Journette and Pasley, Swanson said.

If you can turn up anything on a Laura Wright who lived in Springfield, Massachusetts, in 1916 and had a brother named Harrison, please let me know.

Sometime next month, I’ll tell you about Swanson’s current AP history class project, which is even more fascinating than this one.