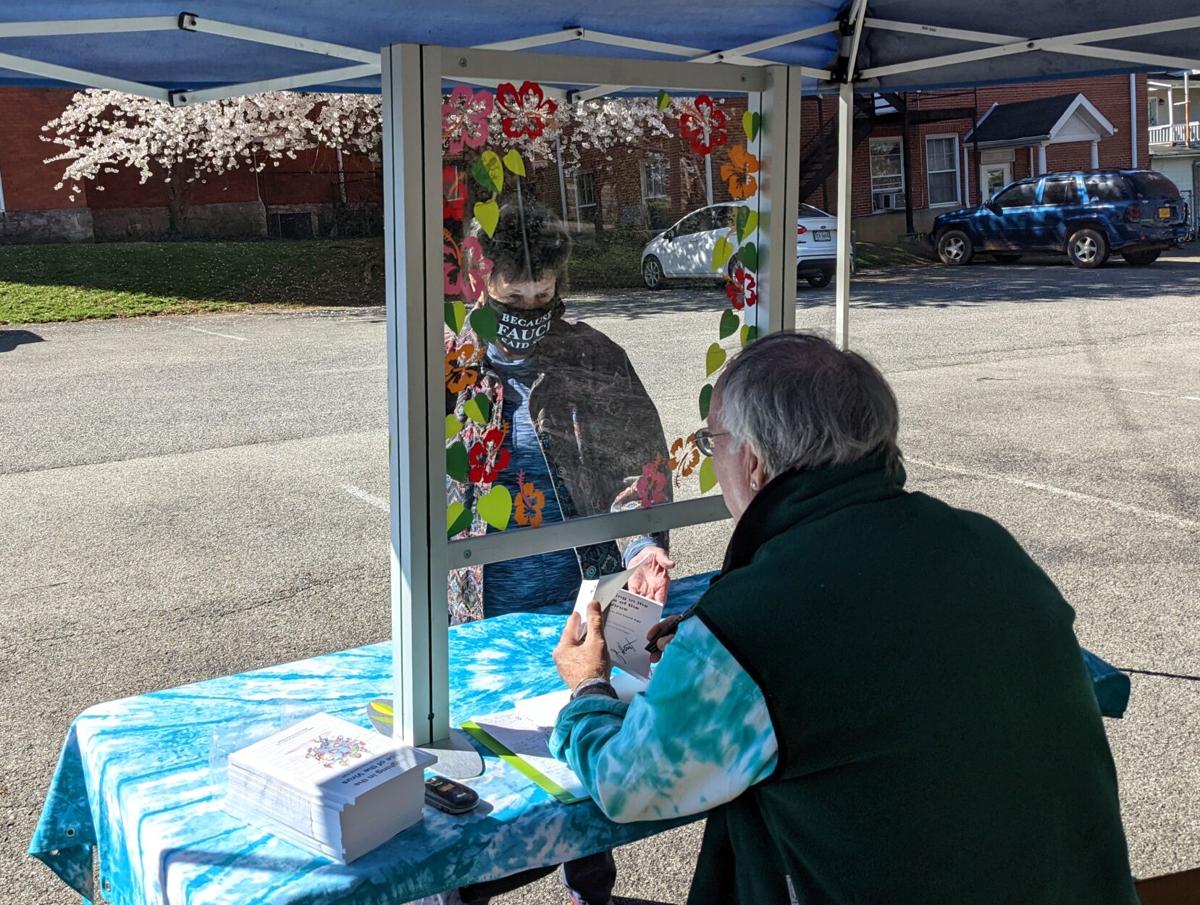 Betsy Kiester, a retired teacher, picks up her copy of “Laughing in the Face of the Virus: Limericks in the Covid Age,” from Gary Hunt outside Trinity United Methodist Church in Old Southwest March 30. Hunt spurred the idea for a pandemic limerick contest in this newspaper, then collected the verse and published it. He raised $1,100 for Kids Soar, a children’s literacy program. 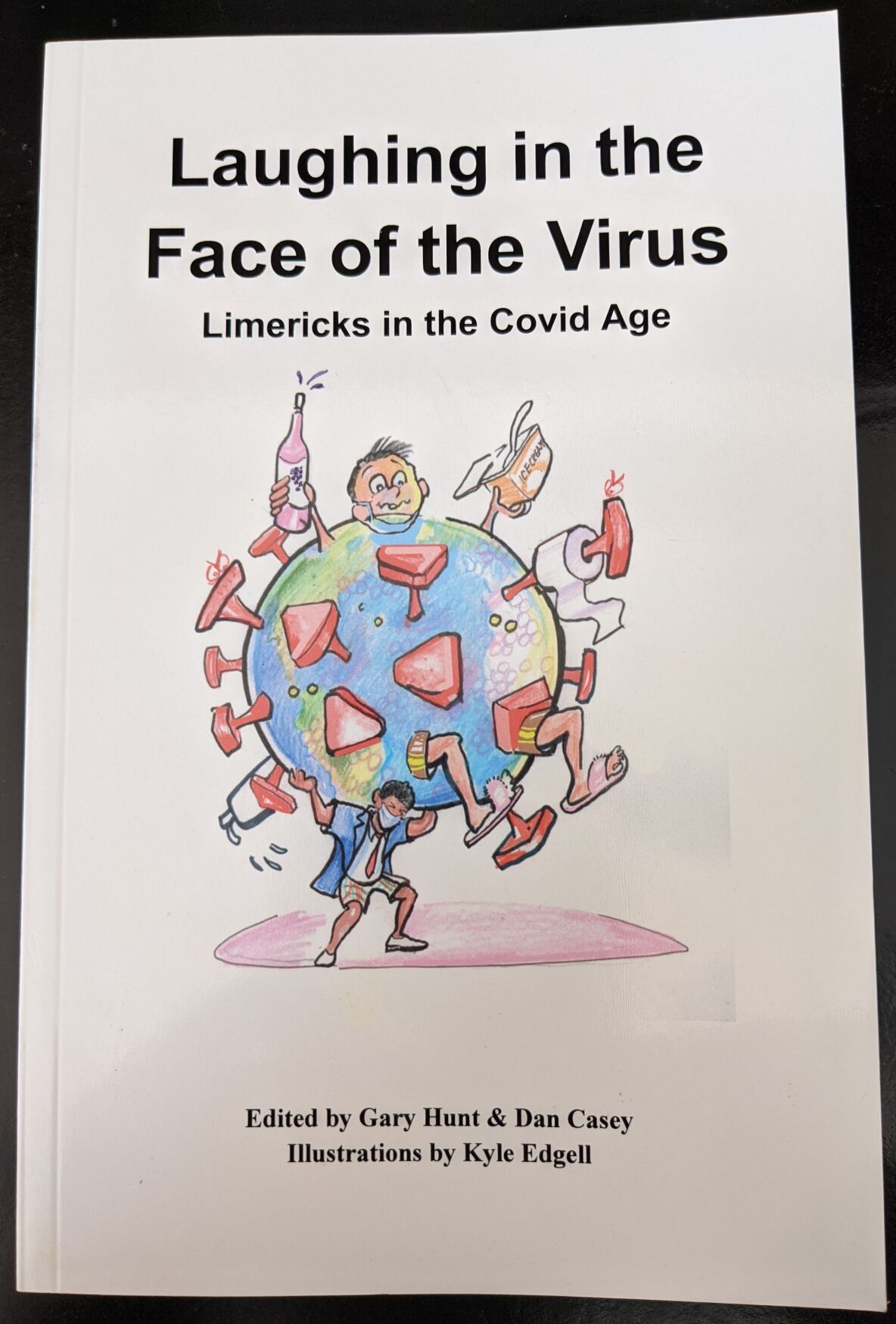 The book of pandemic limericks Gary Hunt collected, published and sold. Proceeds of $1,100 were raised for Kids Soar, a literacy program for disadvantaged youths.

Are you ready for the final chapter in the Great COVID-19 Limerick Challenge?

That began by accident early in winter when Gary Hunt took fingers to keyboard, doodled out some pandemic limericks and posted them to Facebook. He encouraged others to weigh in with their own.

When they did, he passed them onto yours truly. “Maybe you could get a column out of this,” Hunt suggested.

Why not a contest? I thought.

That ended with Hunt collecting scores of limericks from dozens of doggerel divas. The winner of the Great COVID-19 Limerick Challenge was Blacksburg artist Sally Mook. (Her “prize” is lunch with Hunt and me, and that’ll happen early in May, just as soon as my vaccination is fully effective.)

The overwhelming response spurred another brainstorm: Why not a book? Hunt thought.

He arranged for illustrations by Roanoke artist Kyle Edgell, set up publication through an Ohio company, 48 Hour Books, then sold 120 copies in relatively short order.

It just goes to show how folks can combine fun with fundraising — albeit on a small scale — to help a community’s do-gooders.

The book’s title is “Laughing in the Face of the Virus: Limericks in the Covid Age.” Most of the buyers were the 100 or so folks who contributed. A handful were in far-flung places like Canada and Northern Virginia.

Hunt mailed a small number copies to them. But most of the authors were local, and he distributed their volumes over a couple of days in a parking lot outside Trinity United Methodist Church in the Old Southwest neighborhood.

After the second distribution Monday, Hunt presented checks totaling $1,100 in proceeds to a faith-based children’s literacy program called Kids Soar, which is headquartered at the church. Like many businesses and institutions, the 32-year-old nonprofit has struggled during the novel coronavirus pandemic.

Executive Director Candace Hess told me the annual budget for Kids Soar took a beating last year. Before the pandemic, it was $489,000. This year it’s $230,000 because the organization isn’t running at full capacity, because it has to comply with pandemic control guidelines.

“Good question!” Hess replied after a pause. “I was out of town and I just came back and saw the checks.”

She said it’ll probably be spent on a children’s literature. Some of the books Kids Soar now uses are six years old and getting tattered and torn, she said. Also, “we’re always in need of food for our food pantry.”

The donation was nearly three times the $400 Hunt initially expected to raise for Kids Soar. For that we can thank the generosity of The Roanoke Times’ readers.

A number kindly and deliberately overpaid for the limerick collection and requested the excess be donated to charity.

Hunt told me he paid $3.50 per book for publication. Though he charged $6.50 for each volume, he estimated that a third of buyers wrote checks for more than that.

“Three to four people sent $100,” Hunt told me. “Four to five donated $50. A bunch mailed $25 and they wanted only one book.” A reader from Lexington, Sangmie Schellestede, sent him $100 for Kids Soar — she didn’t request a book.

One buyer/limericist, Jerry Hale of Smith Mountain Lake, bought eight copies, more than anyone else. After that, Hunt found himself having to limit multivolume purchases requested by some others, because he was running out of books.

“I think [Hale] and his wife are going to be traveling a bit, visiting different people, and he wanted some ‘thank you’ gifts to bring with them,” Hunt said.

Hunt’s already planning his next fundraising venture, although he’s got a bit less time on his hands these days. His employer, Carilion Clinic, which furloughed Hunt early last year, has called him back to work as a handyman.

His next endeavor is another limerick book, this one focusing on music. Proceeds from its sales will be donated to a local music venue, Hunt said.

“I have four or five friends in town who are musicians. Most of them were starving last year, because they couldn’t do concerts or gigs,” Hunt said.

He’s looking for limericks about “as wide a range of musical styles as I can,” he said. Besides soliciting music-related verse from pals, he’s reached out to organizations such as the Roanoke Symphony and Opera Roanoke.

Neither I nor this newspaper are officially involved. So if you want to write a limerick about music, send it directly to Hunt at bookbagsanta@verizon.net

For a little inspiration, here’s one Hunt composed:

All year, she’s been waiting in the wings.

The damn virus shut down many things.

But, the opera’s not dead,

It WILL forge ahead.

It’s not over ‘til the fat lady sings!

Betsy Kiester, a retired teacher, picks up her copy of “Laughing in the Face of the Virus: Limericks in the Covid Age,” from Gary Hunt outside Trinity United Methodist Church in Old Southwest March 30. Hunt spurred the idea for a pandemic limerick contest in this newspaper, then collected the verse and published it. He raised $1,100 for Kids Soar, a children’s literacy program.

The book of pandemic limericks Gary Hunt collected, published and sold. Proceeds of $1,100 were raised for Kids Soar, a literacy program for disadvantaged youths.