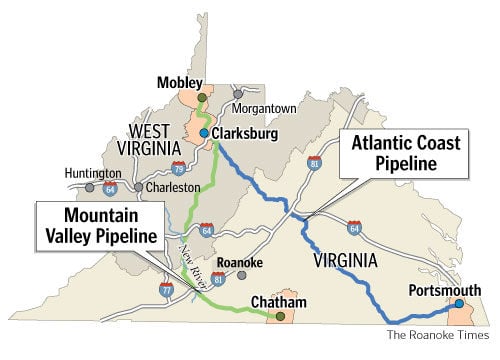 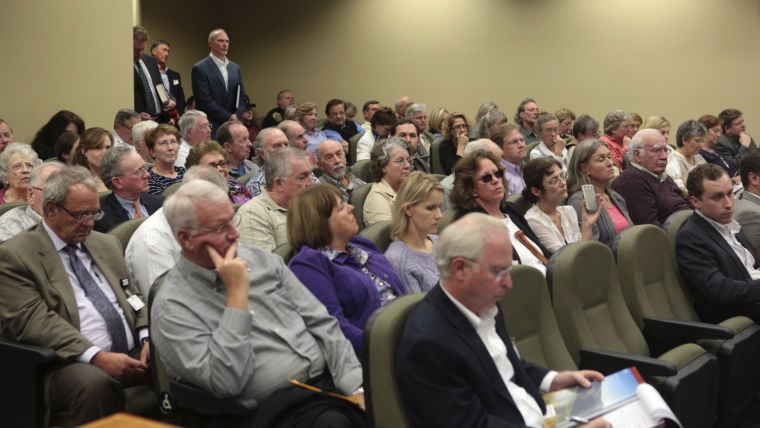 Many people were in attendance during the Roanoke County Board of Supervisors meeting where EQT and NextEra representatives were on hand.

As the crow flies, it’s a little more than 5,000 miles from Bent Mountain in Roanoke County to Kiev, the capital of Ukraine. But recent events in both places are more linked than you might think.

I’m referring to the Mountain Valley Pipeline, a proposed 300-mile natural gas transmission line that has riled up residents in the counties of Giles, Floyd, Roanoke, Montgomery and Franklin — localities which it might pass through.

In the small picture they are battling to keep 125-foot-wide swaths of their land from being ripped up, and to preserve land uses, and because they’re wary of potential gas leaks in the high pressure line and other environmental degradation.

But the picture here is much, much bigger. Gazillions of dollars and some serious geopolitics are in play. It’s a bit like a real-life version of the Parker Brothers board game ”Risk,” with some elements of chess thrown in.

To understand this, we have to back up a bit.

The United States is in the midst of a huge energy boom. If we haven’t already, we’re about to eclipse Saudi Arabia as the world’s leading oil-producing country.

Meanwhile, as a result of the gas drilling process known as fracking, in which water and a concoction of chemicals are injected into the earth, we’re already the biggest gas-producing country in the world. No. 2 is Russia, which is a principal gas supplier to Europe.

Fracking, which is quite controversial because it may be poisoning groundwater supplies, has produced an enormous glut of natural gas that’s expected to grow in coming years. Because of that, the wellhead price of 1,000 cubic feet has fallen from about $11 in 2008 to under $4 now. Which means the fracking companies are making a much lower return on their investments than they were only a handful of years ago.

About the only way to increase that price is to find new buyers. The best way for gas producers to accomplish that is to export their product. But they can’t do that unless they can move it to a coast, where it can be loaded on ships. Which is why they need more pipelines.

The proposed Mountain Valley Pipeline would move gas to Chatham, where there’s already another pipeline, Transco, that runs north and south. It connects to other pipelines, which connects to a place on the Chesapeake Bay called Cove Point in Lusby, Maryland.

That’s owned by Dominion Resources. Late in September the Federal Energy Regulatory Commission approved Cove Point as a liquefied natural gas exporting facility. That’s no coincidence whatsoever. Another application for an export facility outside Savannah, Georgia, is before FERC now.

Once gas traveling through the Mountain Valley pipeline reaches either of those terminals, it can be liquefied and loaded onto Europe-bound ships. That would reduce the glut of gas in the U.S., which could lead to higher domestic prices.

It could also lead to higher prices for electricity. In the U.S., gas-fired electric power plants are quickly replacing coal-fired power plants both because gas is cheaper right now and the latter are much more polluting and are under pressure from the Environmental Protection Agency.

But there is more.

The reason Europe would buy those U.S. gas exports made the news a little more than a week ago, when Russian President Vladimir Putin threatened, indirectly, to reduce the flow of Russian gas to Europe. The backdrop to that is a growing civil war in Ukraine in which Russia and the European Union are on opposite sides.

More than a quarter of Europe’s gas comes from Russia, and a sizable share of that comes through pipelines that pass through Ukraine. Russia has accused Ukraine of stealing gas from those lines. Meanwhile, Europe has accused Russia of using gas sales as a political wedge to increase its political influence over Ukraine.

Russia in June shut down gas deliveries to Ukraine. Now it’s threatening to reduce supplies of gas that moves through Ukraine and into Europe.

So in the long term, the Europeans are looking for an alternate gas supplier. And the fracking companies in the United States are desperate to sell off their U.S. oversupply. That’s what you call a market — but it depends on the ability to deliver a commodity.

That’s the big picture for the $3 billion or more Mountain Valley pipeline project, as well as an even longer Virginia pipeline Dominion Resources is proposing that would not affect the Roanoke region.

The pipeline companies’ claims that they would fuel gas-fired electric plants are factually (but only partly) true. So are their claims the pipelines will create thousands of jobs.

What they carefully avoid mentioning are exports. And when pressed on that, they hem and haw a lot and try to sidestep the question because they can’t deny it with a straight face. And those pipeline jobs? They’re temporary.

To sum it all up: Construction of the Mountain Valley Pipeline will employ thousands — until it’s built, after which most of those workers will be laid off.

It will help trade away U.S. energy independence. It could result in cheaper (or more stable) home heating prices in Europe, but could also lead to price increases for gas and electricity in the U.S. The gas producers would make a killing.

And, it will indirectly give the finger to Putin by preventing Russia from bullying Europe over its supply of natural gas. That may well increase political tensions in Ukraine, and rekindle the Cold War — or worse.

Remind me again: Where did the first two World Wars begin?

Many people were in attendance during the Roanoke County Board of Supervisors meeting where EQT and NextEra representatives were on hand.