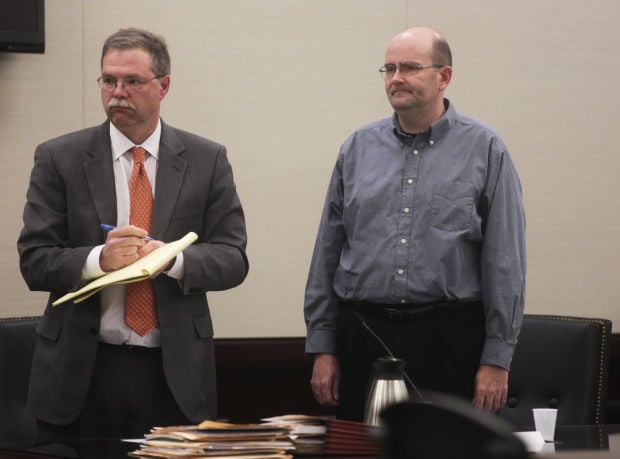 Eugene Todd Mills (right), former treasurer for the Virginia FFA Foundation, listens to his sentencing Monday with his defense attorney Fred Kellerman at the Montgomery County Circuit Court in Christiansburg. 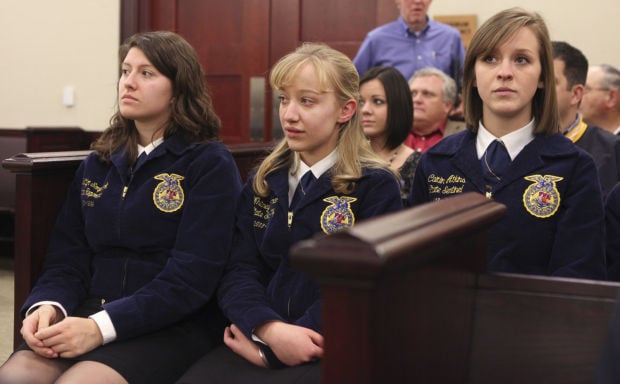 By Jacob Demmitt | The Roanoke Times

The man who stole more than $700,000 from the nonprofit fundraising arm of the Virginia FFA Association was sentenced in Montgomery County Circuit Court on Monday to serve five years in prison.

Of the $716,000 Eugene Todd Mills is also expected to pay in restitution, only $60,000 was returned the day he was sentenced, according to courtroom testimony.

Where the rest of the money has gone, county Assistant Commonwealth’s Attorney Andrew Stephens said, is a question that will continue to hang over the courtroom. He called the case, which included nine counts of embezzlement, “stealing on an epic scale.”

Mills, who had served as the Virginia FFA Foundation treasurer at least since 2002, had deposited donations intended for the organization into a bank account, which he used to write himself about 162 checks since 2007, according to testimony.

Mills, 42, entered an Alford plea to the nine counts of embezzlement in September, which has the same effect as a guilty plea but allows him to maintain his innocence.

Testimony also showed Mills had falsified audits to hide the embezzlement and that he didn’t properly file the Virginia FFA’s taxes, which led to the foundation losing its nonprofit tax exempt status until two weeks ago.

The courtroom was divided at the sentencing. On one side sat Mills’ family and friends, who spoke about him as a “family man,” “Christian man” and a “nice child” who didn’t cause his mother any problems growing up. On the other, members of the FFA sat in their signature blue jackets and talked about how difficult it will be for them to tell their donors they were deceived by “one of our own.”

Mills turned to his side of the courtroom after receiving a 30-year prison sentence with all but five years suspended, gave a faint wave and received a thumbs-up in return as he was escorted from the courtroom. Other supporters broke down in tears.

When given a chance to speak, Mills told the court the FFA had been a big part of his life for a long time and he was “truly sorry.”

The foundation had about $100,000 on the books when Mills took over as treasurer, according to testimony by Andy Seibel, who runs the Virginia FFA.

The organization saw a spike in funds about 2009, when it established new forms of donations, sold property and received one large $1.6 million donation.

Suddenly, Mills was in charge of investing about $2.5 million, according to Seibel. While the original donations would remain untouched, the interest from the donations would be used to fund the FFA’s programs.

Seibel testified all the money seemed to be used properly at first, when Mills provided signed audit reports that showed the proper balances in the proper accounts. It wasn’t until later, Seibel testified, the organization realized the signatures were for accountants who didn’t exist.

Through the investigation, Seibel said he learned that instead of investing the money as directed, Mills had put it in a different account the FFA was unaware of.

In the meantime, testimony from both sides showed Mills used the account to write himself checks to support his Christiansburg-based home improvement business, Mills & Son.

Mills’ lawyer, Fred Kellerman, called his client a “horrible businessman” who dipped into FFA funds whenever his personal business dried up.

Virginia FFA officials eventually noticed the missing money while looking at their finances for upcoming activities and confronted Mills in August 2012, according to previous testimony by Stephens.

Mills said he had moved the money into a different account because he was concerned about the security of the account at the bank where he was supposed to have deposited the money, Stephens has said.

Mills told the FFA officials that over time, he had used money from his personal business — Mills & Son — to pay for the foundation’s debts, Stephens said. When asked to do so, Mills said he had no problem transferring the money back into the proper account, but he told FFA officials that a portion of that money was owed to Mills & Son since he had used funds from his business to support the foundation, Stephens has said.

At that point, Stephens has said, the Virginia FFA contacted the state police and removed Mills from his position as treasurer.

Seibel testified the theft was “devastating” for the organization. The FFA had to cancel speakers, was unable to send students on trips and couldn’t pay scholarships to others.

As news spread, Seibel said he was often asked how the FFA could let something like that happen.

“Donations have dried up and people have been very skeptical about investing in these children,” he said.

Now, Seibel said, the unpleasant job of calling donors to tell them what happened to the money they had given will likely fall to him.

“I’m going to have to make those difficult calls because I can’t snap my fingers and make $700,000 appear,” he said. “It’s unforgivable to think a man would steal from children.”

A 20-year-old Roanoke man is accused of murder in a Wednesday night shooting that left another man dead in a city convenience store, according…

Eugene Todd Mills (right), former treasurer for the Virginia FFA Foundation, listens to his sentencing Monday with his defense attorney Fred Kellerman at the Montgomery County Circuit Court in Christiansburg.