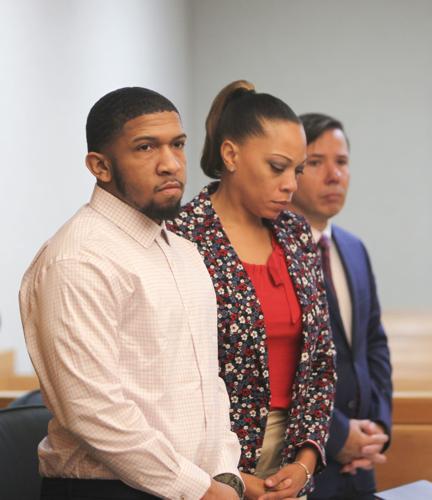 Darreonta Lamar Reynolds (left) was charged with murder following a fatal shooting in February outside the Triangle Mart in northwest Roanoke. He was represented in part by his stepmother, Richmond attorney Cathy Reynolds (center), and was acquitted Thursday. 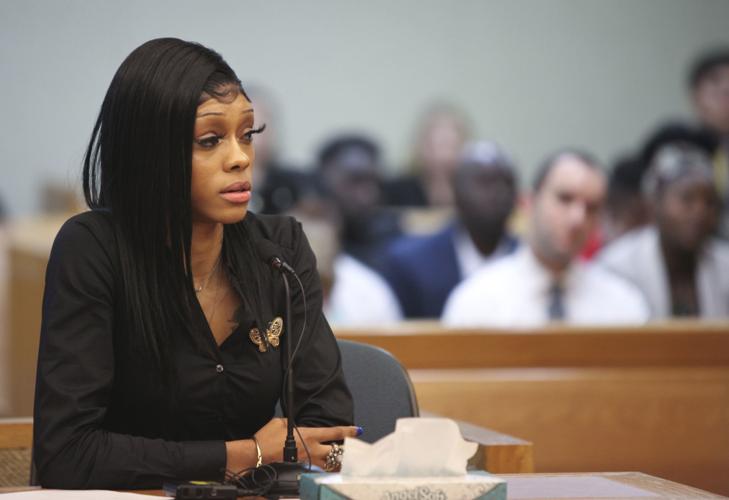 Ranikqua Bonds testified Thursday on behalf of the defendant, Darreonta Reynolds. She was at the scene in February when Reynolds, her boyfriend, shot Jean De Dieu Nkurunziza outside the Triangle Mart in northwest Roanoke. “Seeing a gun pointed at you ... I was terrified,” Bonds said. 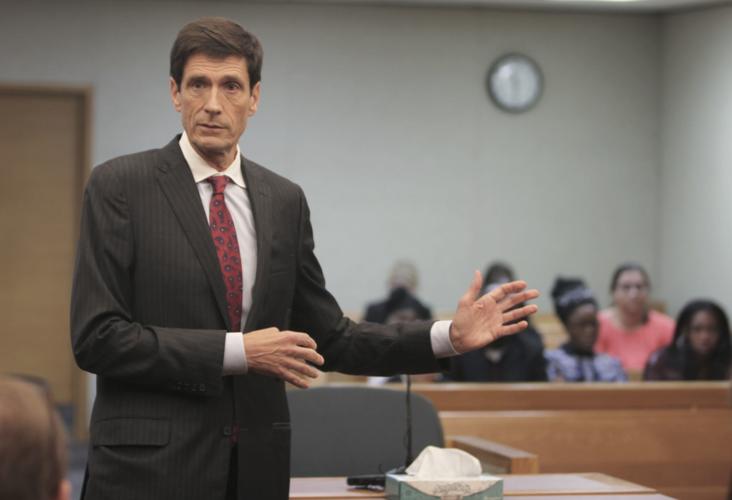 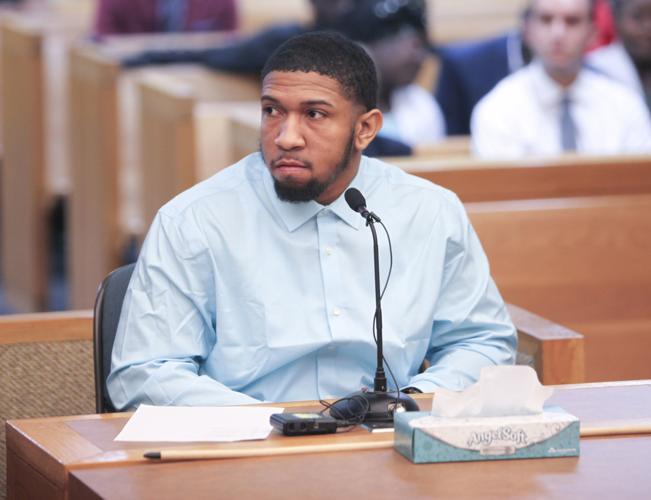 Darreonta Lamar Reynolds testifies in his own defense in court Thursday.

The most arresting pieces of evidence, which came into court through security videos and body camera recordings, illustrated just how fast the shooting happened.

In one clip, the officers who responded to shots fired at the Triangle Mart early on Feb. 24 found the victim’s empty car still running in the parking lot, its stereo audibly pulsing, its owner lying newly dead near the gas pumps.

Police then had to corral surprised customers in the Cove Road store’s parking lot who insisted “I just pulled in!” but who nevertheless had come onto the scene of a homicide.

Chest-cam footage also caught a patrolman hurriedly searching the store for suspects and finding none, but then having to pull sizzling, unattended chicken out of the deep fryer so it wouldn’t catch fire.

But the exhibits that most fully seemed to tell the story were clips from three Triangle Mart cameras, two inside and one out, totaling no more than 30 seconds.

They partially captured a scuffle between two men — Darreonta Lamar Reynolds and off-duty clerk Jean De Dieu Nkurunziza — followed by Nkurunziza racing into the store, grabbing a .40-caliber Glock, angrily racking the slide to cock the weapon, and rushing back out to confront Reynolds.

An exterior camera caught their second conflict, which ended with flashes of gunfire, a spray of car-window glass, and Nkurunziza killed almost instantly by a single shot to the chest.

Autopsy photos show he was struck just above his right nipple, and a medical examiner said the slug fractured several of his ribs and passed through his heart, penetrating both lungs before lodging in his back.

Reynolds, 25, admitted he shot Nkurunziza but argued it was done in self-defense.

On Thursday, after a two-day trial, Roanoke jurors took approximately 90 minutes to acquit Reynolds on charges of murder, using a firearm to commit that crime and discharging a handgun from a vehicle.

Evidence and testimony suggested that Reynolds’ girlfriend, Ranikqua Bonds, 24, had gone to the store at about 12:30 a.m. to get cash from the ATM so she and Reynolds could go out.

At the store, she ran into Nkurunziza.

“Once I went in, I ended up getting sidetracked,” Bonds testified Thursday. She and Nkurunziza, 26, were longtime friends. They were never romantically involved, but she later acknowledged to prosecutors she believed he had feelings for her.

Security footage showed them meeting at the counter and hugging, then going out and getting into her car, where they sat for more than 10 minutes.

Cameras also captured Darreonta Reynolds arriving at the store soon after, finding Bonds in her car, then having words with Nkurunziza. Reynolds claimed this week he had no problem with their friendship but maintained that Nkurunziza got combative with him, so he knocked him to the ground.

That part of their conflict was not fully visible on camera, but it’s clear Reynolds had a pistol held low and, soon after, Nkurunziza could be seen going into the store to get a gun as well.

“He basically told me he would kill me,” Reynolds testified.

Toxicology reports show Nkurunziza had been drinking and using methamphetamine, which a forensic scientist testified could have left him in “an exaggerated emotional state,” angrier and more impulsive.

Another Triangle Mart employee, Abraheem Kofahi, was the prosecution’s sole eyewitness and said Nkurunziza “made a beeline right behind the counter to the gun.”

“Before I realized what was going on … he was already out the door,” Kofahi said. “That’s when they started shooting at each other.”

“It happened so quickly, I really don’t know who fired first,” he added.

After the shooting, Bonds drove Reynolds away , and they did not call the police. He covered his girlfriend’s damaged car with a tarp and threw his shell casings into a nearby yard.

“Those are not the actions of a man who acted with honor and who acted in self-defense,” assistant prosecutor John McNeil argued.

But defense testimony, and texts between the couple, suggested Reynolds had planned to turn himself in to police once his stepmother, Richmond-based attorney Cathy Reynolds, got to Roanoke.

When detectives tracked Darreonta Reynolds down two days after the shooting, he and his stepmother went to the police station voluntarily. He answered investigators’ questions and was not arrested at that time.

He was indicted the following month on charges related to the homicide.

Assistant prosecutor Jack Patterson categorized the incident that led to the shooting as “the classic triangle — two men, one woman.”

“The defendant was, of course, at fault in bringing on this dispute,” Patterson said during the trial. “He didn’t show up innocent. He showed up with a firearm.”

Defense attorney Paul Beers called Reynolds’ reaction “obviously self-defense” and said his client had acted to protect himself and his girlfriend from Nkurunziza, whom he called “a hothead ... jacked-up on drugs.”

“You can see on the video exactly what he [Nkurunziza] wants to do. He wants to commit murder,” Beers said.

Earlier this month, prosecutors brought additional indictments against Reynolds, arguing that prior to the shooting, during the initial scuffle, he pistol-whipped Nkurunziza. Those charges were struck by the judge, who said they lacked sufficient evidence.

Reynolds, held without bond since his indictment in March, was slated to be released Thursday.

Nkurunziza was originally from Tanzania and came to Roanoke in 2006.

Cathy Reynolds asserts in a lawsuit that her home was searched without justification.

Darreonta Lamar Reynolds (left) was charged with murder following a fatal shooting in February outside the Triangle Mart in northwest Roanoke. He was represented in part by his stepmother, Richmond attorney Cathy Reynolds (center), and was acquitted Thursday.

Ranikqua Bonds testified Thursday on behalf of the defendant, Darreonta Reynolds. She was at the scene in February when Reynolds, her boyfriend, shot Jean De Dieu Nkurunziza outside the Triangle Mart in northwest Roanoke. “Seeing a gun pointed at you ... I was terrified,” Bonds said.

Darreonta Lamar Reynolds testifies in his own defense in court Thursday.