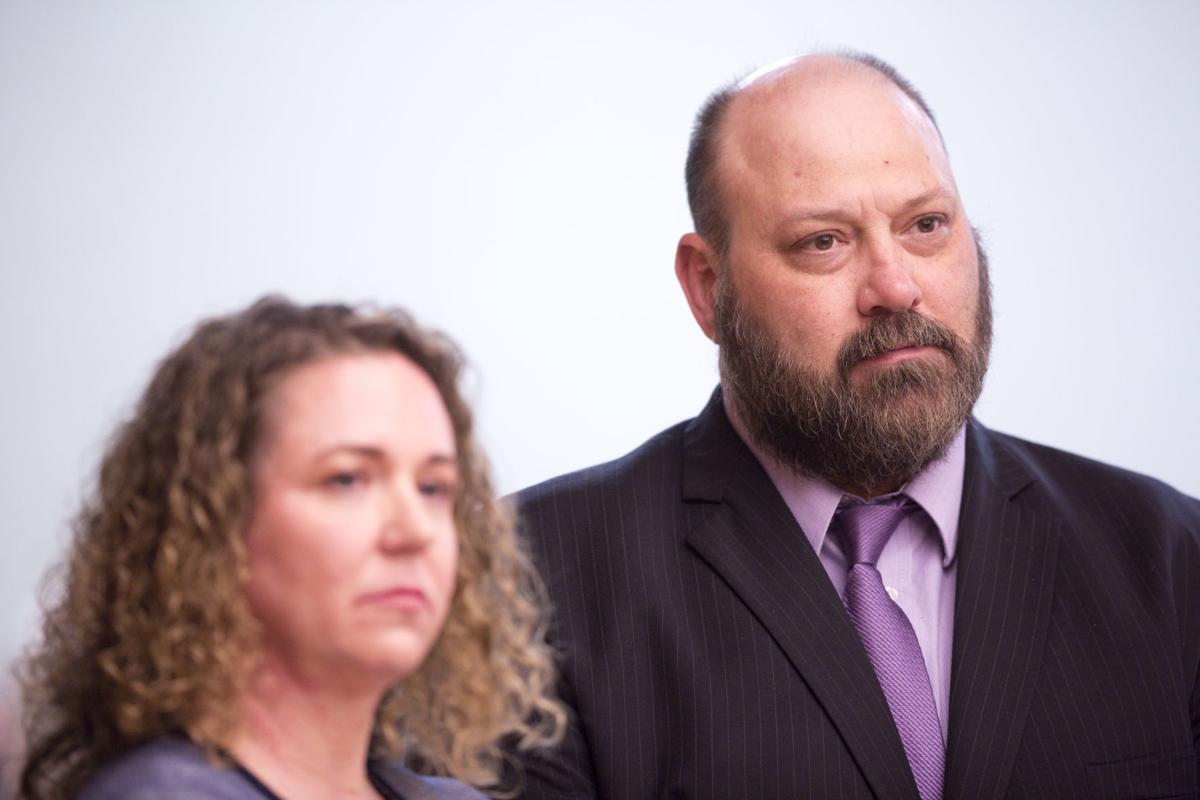 Vicki Francois (left) stands with her client, C.J. Covati, who was accused of assaulting a dancer at the Roanoke strip club he managed. He was convicted last year by a judge but appealed the verdict. A jury on Tuesday acquitted him. 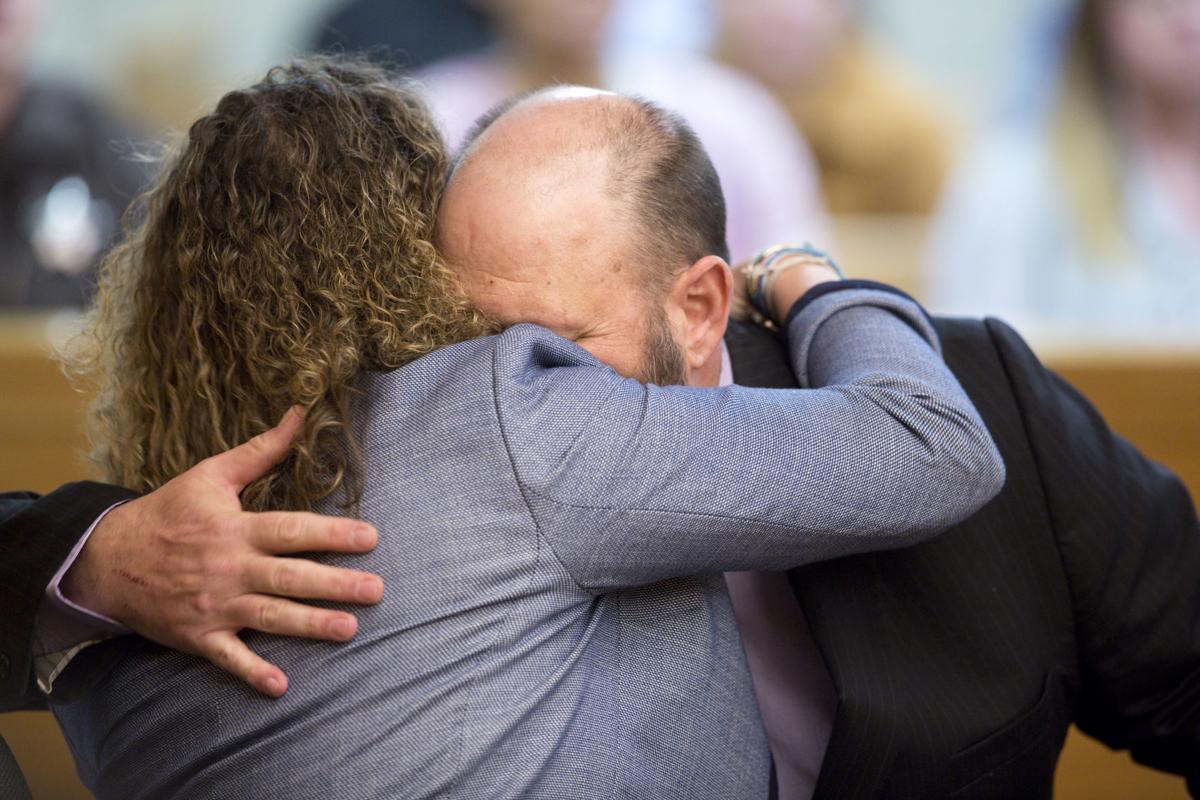 C.J. Covati hugs his attorney, Vicki Francois, after a jury acquitted him of assault. He had been accused of attacking a dancer at a Roanoke strip club, where he was a manager.

A Roanoke defense attorney convicted last fall of assaulting a dancer at a strip club he managed has seen the case against him dismissed on appeal.

Charles John “C.J.” Covati had previously been sentenced to serve 30 days in jail and pay a $1,000 fine, after a judge in Roanoke General District Court found him guilty of misdemeanor assault in September.

A longtime fixture of courts in and around the Roanoke Valley, Covati has presided as a substitute judge, hearing general district and domestic relations cases, and has served as a court-appointed defense attorney.

Covati appealed his conviction into circuit court where, on Tuesday, a seven-person jury heard testimony across several hours. Jurors deliberated for approximately 15 minutes before returning a verdict of not guilty.

In the wake of that reversal, Covati, visibly relieved, hugged his defense attorney, Vicki Francois.

The charge against him stemmed from an incident that was alleged to have occurred one year earlier to the day, on Feb. 18, 2019, at Roanoke’s only strip club, The Gold and Silver Gentlemen’s Club on Franklin Road.

A new dancer told police that Covati, in his capacity as a manager, had asked her to perform what was described as a training dance for new employees. This was essentially a lap dance, conducted in a private “champagne room” upstairs, during which new performers are reportedly shown ground rules for acceptable behavior between dancers and customers. They’re also told of an emergency hand signal they can flash to a bouncer, who watches a live feed of all private dances.

The woman alleged that during the training dance, Covati groped her inappropriately and tried to choke her, claims she reiterated in testimony she gave for about an hour Tuesday.

The Roanoke Times has not named the woman because of the sexual misconduct allegation in her report.

Francois, in her cross-examination, picked at details of the woman’s account, specifically that she had first taken her complaint to the club’s owner, rather than to police, and that she did not attempt to report the alleged assault to law enforcement until two weeks later, after she had been fired from Gold and Silver.

Even then, Francois pointed out, the woman delayed reporting further, telling police she did not know Covati’s last name. Defense witnesses said he was identified on the club’s Facebook page and its phone list, and frequently left a supply of his business cards at the bar.

When the woman ultimately did file her criminal complaint, on May 8, Francois argued that the woman had inflated her claims and had described an attack that rose to the level of a felony. After an investigation, however, authorities charged Covati only with simple assault.

The dancer also acknowledged on the stand that she has two prior felony convictions for drug-related offenses.

Covati chose not to testify in his own defense.

Although video of the training dance was reportedly recorded, two employees — Allyson Powell, assistant manager and “manager of girls,” and Kenneth Yopp, who was a couch room attendant — said their system erases old footage after two to three weeks. Both testified that they saw the video before it was erased and noticed nothing amiss or inappropriate.

“I would ask you to question their certainty about what they saw,” said Buena Vista Commonwealth’s Attorney Josh Elrod, who was brought in to handle the case as a special prosecutor.

He also argued that the dancers’ use of emergency hand signals suggests cameras aren’t always able to capture everything that happens during a close-contact dance.

The woman has said she is pursuing civil action against Covati and an Equal Employment Opportunity Commission claim against the business, but it was not immediately clear how or whether the verdict would affect those cases.

Retired Judge Michael Irvine presided over his appeal as a substitute; Judge Harold Black was brought in to hear Covati’s initial case.

Covati’s status as a court-appointed lawyer was suspended after he was charged, but that could be reversed. He currently does not serve as a substitute judge, for reasons reportedly unrelated to the case.

Tuesday afternoon, Covati said he has severed ties with Gold and Silver, adding that he recently sold his interest in a bar that’s directly adjacent to the nightclub called The Alibi Pub.

Attorney Charles "C.J." Covati will not be allowed to practice law for 3½ years, according to an agreement he struck with the Virginia State Bar on Monday.

C.J. Covati had previously submitted to a 3½-year suspension on May 17, following a set of professional violations involving two clients.

Vicki Francois (left) stands with her client, C.J. Covati, who was accused of assaulting a dancer at the Roanoke strip club he managed. He was convicted last year by a judge but appealed the verdict. A jury on Tuesday acquitted him.

C.J. Covati hugs his attorney, Vicki Francois, after a jury acquitted him of assault. He had been accused of attacking a dancer at a Roanoke strip club, where he was a manager.