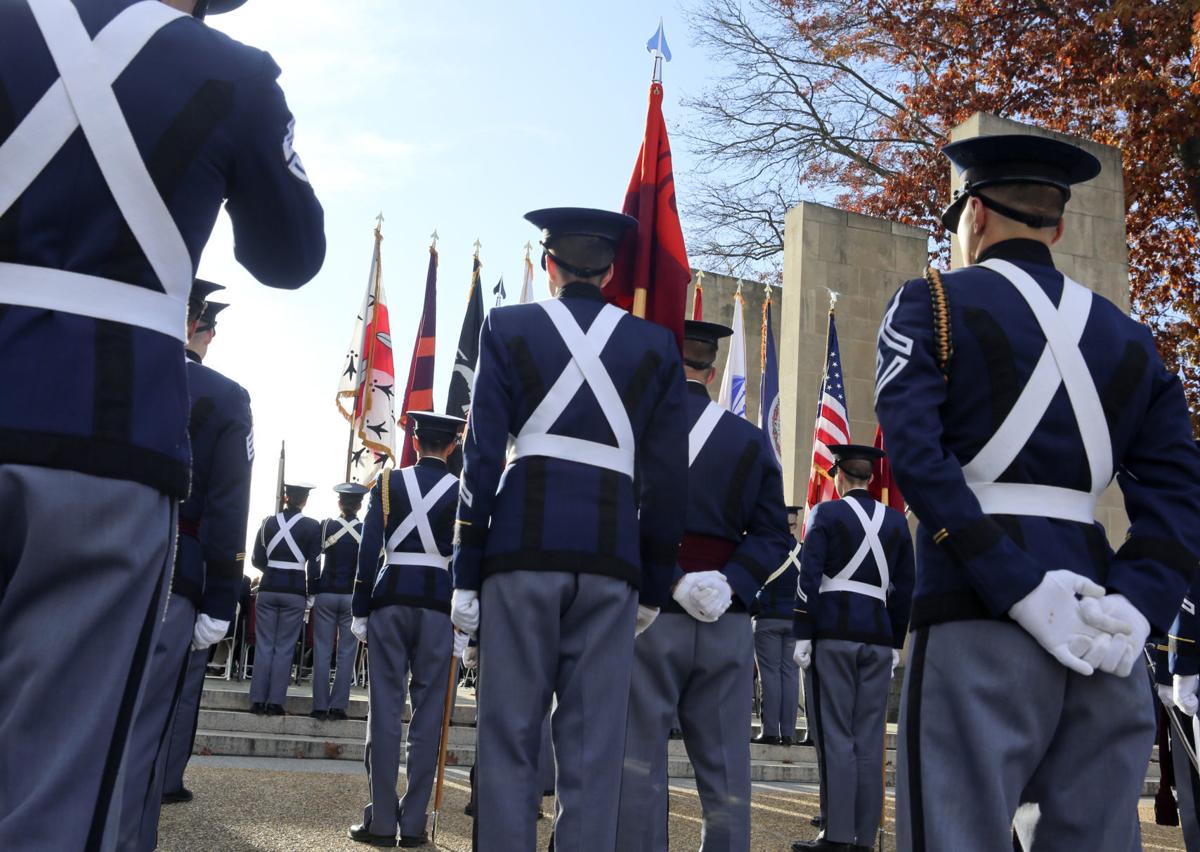 Virginia Tech Corps of Cadets assemble in November at the War Memorial Pylons for a dedication ceremony. 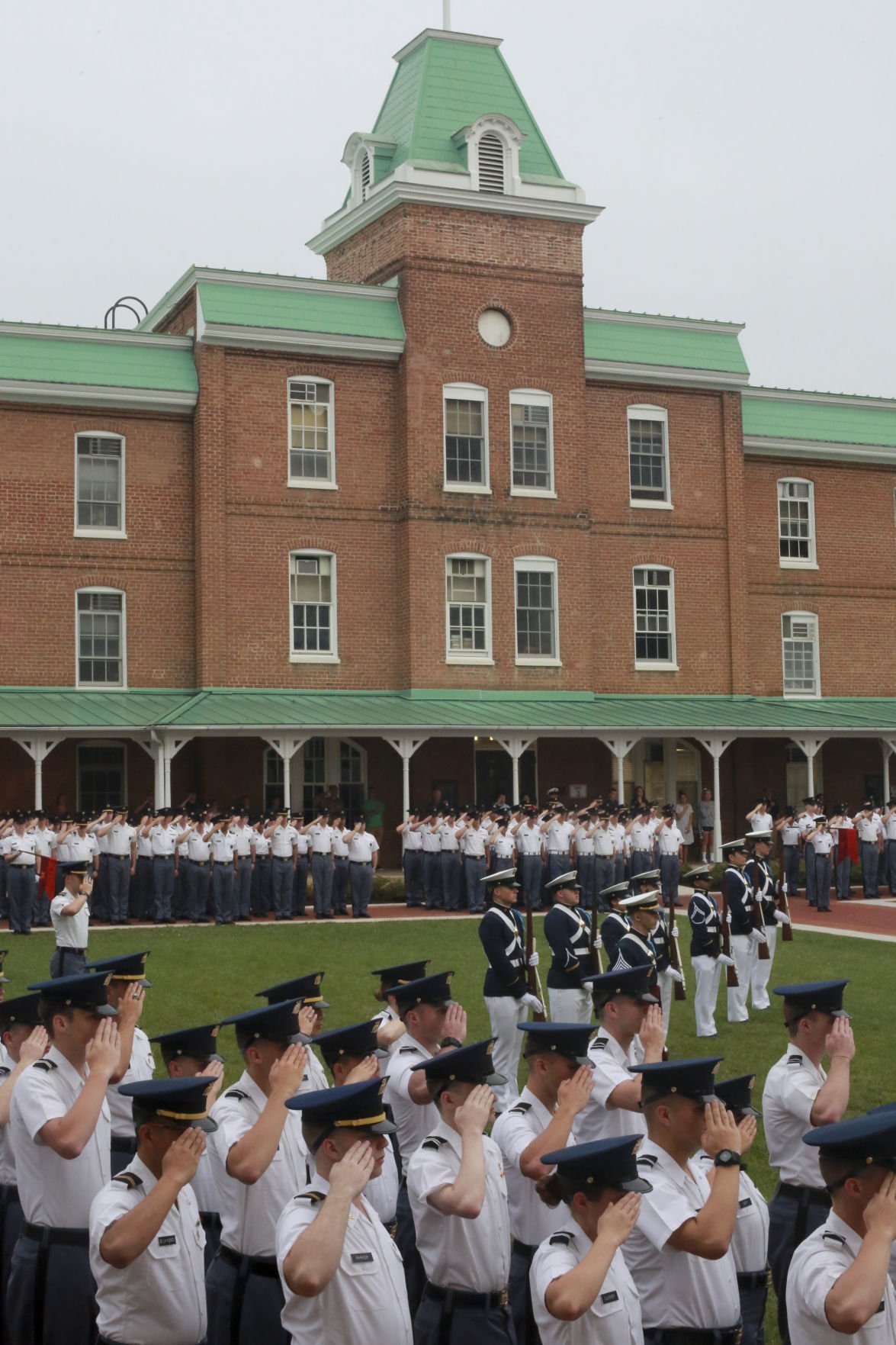 The Virginia Tech Corps of Cadets salute during a Sept. 11 observance ceremony.

BLACKSBURG — A dozen cadets are suspended from Virginia Tech after university officials determined last week they were involved in a “blood pinning” rite in which military pins are stabbed into the chest, according to a Corps of Cadets employee.

Montgomery County Commonwealth’s Attorney Mary Pettitt received a letter dated Dec. 12 from Virginia Tech alerting her office of alleged hazing among the Corps, as required by state law. Pettitt said Tuesday her office is determining whether the actions rise to the level of criminal hazing under state law.

“The Office of Student Conduct and the Corps of Cadets has held a hearing and determined that members of Corps of Cadets were involved in hazing activities as defined by the Code of Virginia,” a university lawyer wrote. “This decision also entails a 10 day appeal period, which runs from today. The students found responsible were notified of both the decision and the ability to appeal today.”

Virginia law defines hazing as “to recklessly or intentionally endanger the health or safety of a student or students,” or to “inflict bodily injury” in a rite of passage, “regardless of whether the student or students so endangered or injured participated voluntarily in the relevant activity.”

The letter did not provide details on the hazing, and Mark Owczarski, a university spokesman, said Thursday the university could not comment on specific cases or conversations.

However, a Corps of Cadets employee with direct knowledge of the incident who did not want to be named out of fear of retribution said the university charged about 15 cadets in a blood-pinning episode that occurred in the fall. Some cadets were found not responsible, and some faced lesser punishments in the hazing policy violation charges. A dozen were dismissed from Tech for one or two semesters, the employee said.

The blood pinning was part of a sophomore initiation that happened around a campfire after cadets ran up embankments with rucksacks and did push-ups in a creek, the employee said.

The employee said it was important to speak about the incident because the public should know the Corps did not authorize the event, handled the case properly, and is moving forward.

“That’s the big piece people got to understand: Accountability is key in the development of future leaders,” the employee said. “And, you know, sometimes accountability hurts.”

“This type of stuff is dangerous to the Corps,” the employee added. “If we don’t do something, then we’re negligent, if we don’t take action to fundamentally adjust the culture in the Corps.”

The practice of blood pinning came to public prominence in the late 1990s when video surfaced of U.S. Marines crying out and bleeding while getting paratrooper jump wings pounded into their chests. The subsequent outcry led the Marines to adopt a policy prohibiting hazing. A 2012 copy of the policy specifically includes “pinning” “tacking on” and “blood wing(ing)” as forms of hazing.

A recent Corps of Cadets graduate described a situation in which the tradition continues.

“In all my experience with any kind of blood pinning [that] did occur, it was always optional and never forced,” said the former cadet, who also did not want to be named out of concern over retribution. “It is truly no different than if you accidentally prick yourself with, like, a thumbtack.”

The former cadet said of activities that might prompt hazing allegations, “You can’t really understand the context unless you were there.”

Such activities can occur outside the official channels of initiation activities, which are written out and approved by staff, the Corps employee said.

“Speaking for the university, and the commandant is a part of the university, [he] would agree that we have zero tolerance for any acts in which a Virginia Tech student or employee would put in harm’s way,” Owczarski said. “Zero.”

“That message is delivered from the moment that they arrive and [is] repeated dozens and dozens of dozens of times to the point of graduation,” he said. “Should any individual elect on their own to not be consistent with those policies and procedures, then there is a process of adjudication, which, again, follows due process and, again, the outcomes could range from no action taken to expulsion.”

In January 2018, the university settled a million-dollar lawsuit brought after a 2010 car crash injured several cadets. An older cadet drove erratically on the way to a picnic to scare the younger cadets. Three cadets brought suit against Capt. James Snyder, who retired in April as a deputy commandant.

The lawsuits claimed Snyder should have been aware of what was an initiation tradition. In recent months, parents of cadets have expressed concerns about alleged bullying, retaliation and a perceived lack of leadership in the Corps, according to screenshots of Facebook messages obtained by The Roanoke Times. None mentioned blood pinning, but after a parent shared a concern about bullying in a cadet family group containing upwards of 400 members, several others chimed in with similar concerns.

“I don’t think that I’ve ever felt inclined to come on to one of these facebook pages but the tone, tenor, and frankly uninformed comments have led me to make an exception,” said a message posted by the wife of the Commandant of Cadets, Maj. Gen. Randal Fullhart, that was attributed to him.

In a post touching on various issues, Fullhart wrote, “We have the same standards for ‘hazing’ that are used by the military and also that of the Commonwealth of Virginia. To suggest that there is going to be a change in expectation after graduation is, to put it nicely, wrong.”

A former Virginia Tech student is suing the university after he was accused of overseeing a Corps of Cadets blood-pinning ceremony last fall.

A former Virginia Tech cadet settled the lawsuit he brought against the university when it suspended him for overseeing a blood-pinning ritual.

Virginia Tech Corps of Cadets assemble in November at the War Memorial Pylons for a dedication ceremony.

The Virginia Tech Corps of Cadets salute during a Sept. 11 observance ceremony.