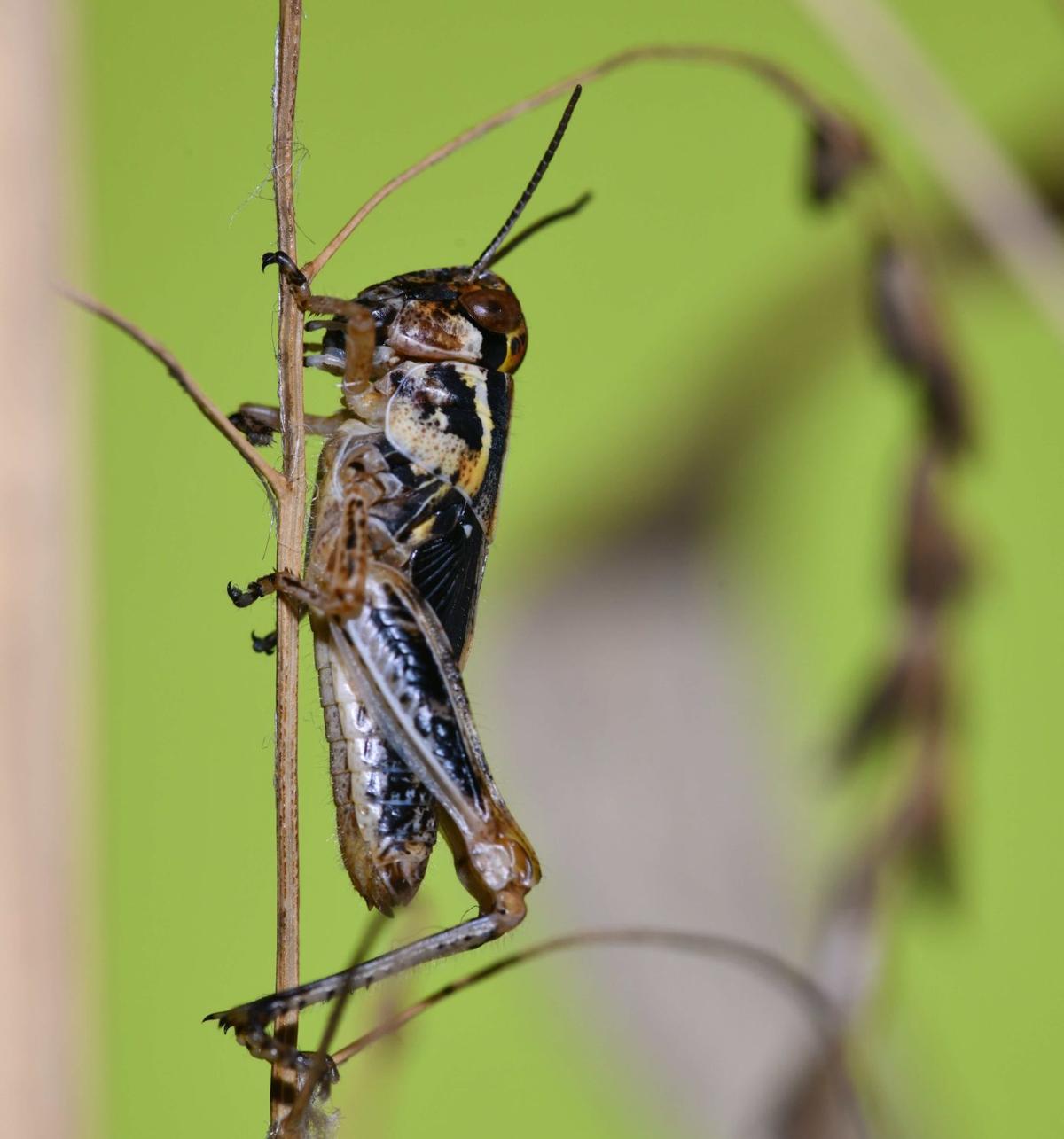 Despite their seemingly gravity-defying leaps and bounds, insects experience much the same physiological effects of gravity as humans do, according to a new study. 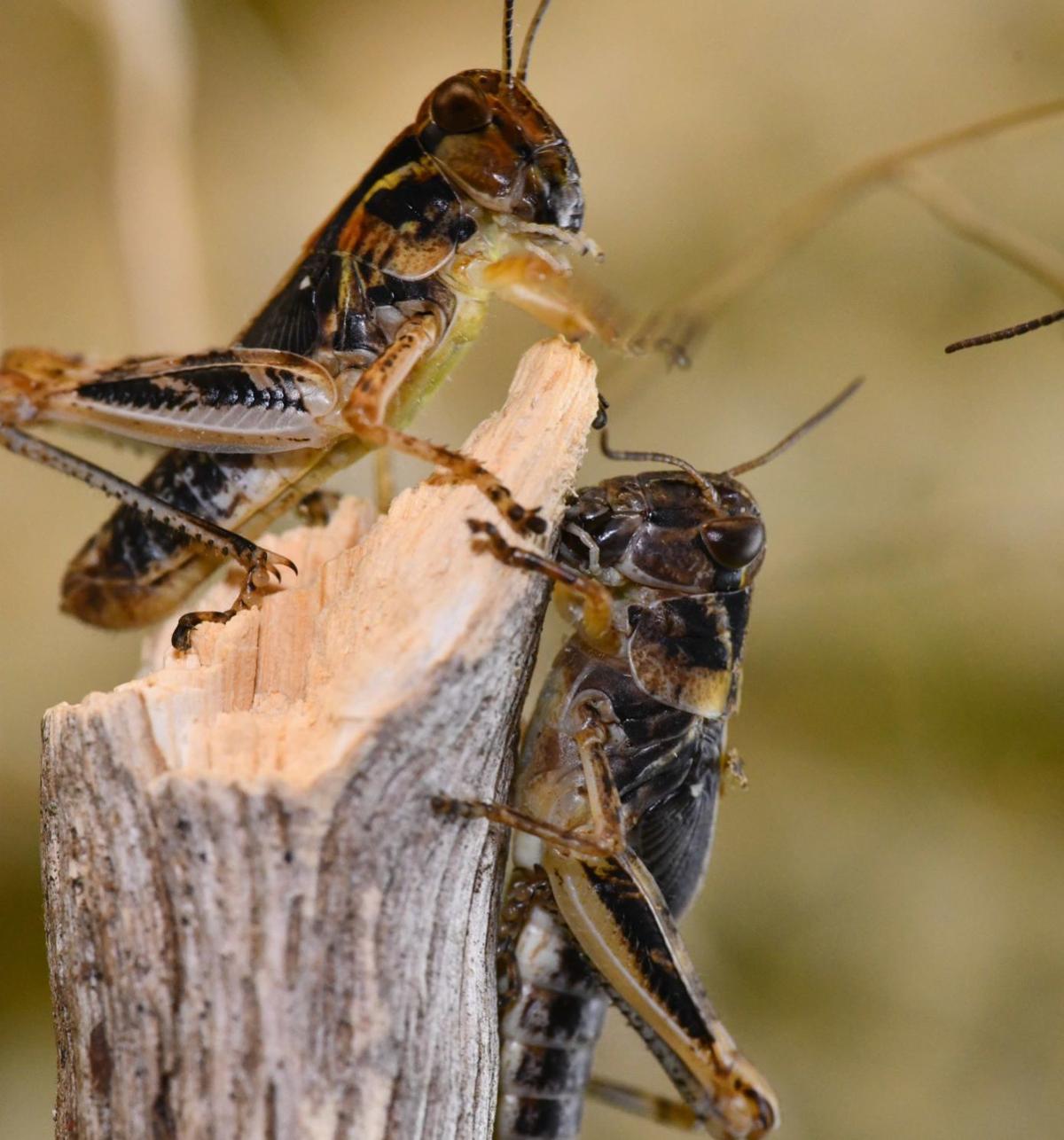 Scientists looking at the effects of anesthetics discovered by accident that the respiratory and circulatory systems in grasshoppers are finely balanced and can be affected by gravity as the insect changes its position. 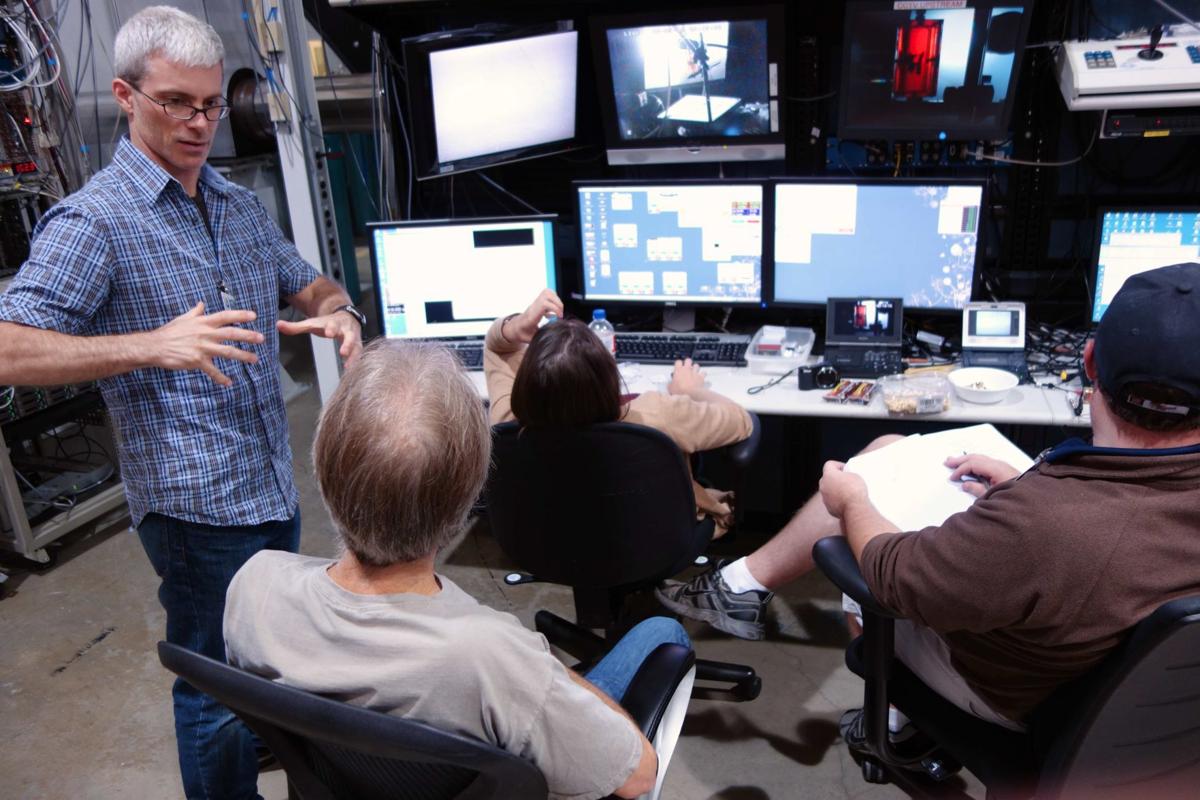 Jake Socha (left), a professor in biomedical engineering and mechanics at Virginia Tech, discusses research with colleagues at Argonne National Laboratory in Illinois in 2013.

BLACKSBURG — Insects do all sorts of acrobatics, buzzing about flowers or creeping along the undersides of leaves.

But until recently, nobody paid much mind to how gravity affects their tiny bodies.

Now scientists — including researchers at Virginia Tech — have discovered that the orientation of an insect’s body affects its breathing and heart rate in much the same way it does in humans.

“Humans, when we stand up quickly, sometimes you feel dizzy,” said Jon Harrison, an environmental physiologist at Arizona State University and a lead author of the study published last week in the journal Proceedings of the National Academy of Sciences. Because not enough oxygen is getting to the brain, the heart speeds up to pump more blood to the head.

“We were able to show that grasshoppers do the same thing,” Harrison said.

The discovery could quicken the pace of research on human health, as it relates to gravitational effects on respiratory and cardiovascular systems. Since insects have a different way of breathing and circulating blood than do humans, the similar responses to gravity were surprising.

Jake Socha, a professor in biomedical engineering and mechanics at Tech, said “the initial finding was by accident.”

Back in 2011, the team was using X-rays at Argonne National Laboratory in Illinois to see inside grasshoppers’ respiratory systems. Insects breathe through tiny holes throughout their body. In grasshoppers, air sacs in the head and rear, connected by a series of pipes, act as the equivalent of tiny lungs.

Researchers were trying to find out the effects of anesthetics, Harrison recalled.

“We were failing,” he said. “We were having a hard time finding a dosage of anesthetic that would put the insect to sleep and not kill it.” When a grasshopper that happened to be positioned head-up died, Harrison recalled, “we noticed the air sac in the head expanding right in front of our eyes.”

Over several years, further experiments found the same gravitational effects. Regardless of the grasshopper’s position, the air sac on top was inflated and the one below was compressed, because of the differences in blood pressure. Since the animals are so small, scientists didn’t expect to see such a difference in pressure between those two poles.

“That’s really weird,” Socha said. “It was suggesting to us that that little change in pressure was enough to influence the status of those air sacs.”

That difference was especially acute when the grasshoppers were put to sleep.

“Now here’s what’s weird. When you let the animal be itself ... then you don’t see that,” to the same degree, Socha said. “You go, ‘Oh the animal’s doing something to control those pressures.”

Researchers found the same effects on the grasshopper’s flow of blood, called hemolymph.

“The blood is sloshing around this chamber like a can of soda,” Socha said, describing how scientists had previously understood the inner workings of insects. “If you imagine a can of Coke, and flip it over, you can calculate what the pressure would be, because it’s just a column of fluid.”

But when researchers did the equivalent of that experiment on the insects — putting them head up or head down — Socha said, “We didn’t get that.” Instead, heart rates decreased in the head-down position, much like how your heart rate slows down when doing a hand-stand.

“The whole point is that lends more evidence to ‘Oh, this animal is able to control its blood pressures, somehow,” Socha said. “The big question is how is it doing that? And we don’t actually know.”

Kendra Greenlee, a professor and chair of the biological sciences department at North Dakota State University, described the findings as “really exciting.”

“I think this is a really good example of innovative research,” said Greenlee, who has previously collaborated with Socha and Harrison but was not involved in the study. “In general, we don’t know very much about the insect heart and circulatory system, and I think this really opens it up to people to take another look.”

Besides the potential benefit to biomedical research for humans, Harrison said, the finding is important for our understanding of insects.

Despite their seemingly gravity-defying leaps and bounds, insects experience much the same physiological effects of gravity as humans do, according to a new study.

Scientists looking at the effects of anesthetics discovered by accident that the respiratory and circulatory systems in grasshoppers are finely balanced and can be affected by gravity as the insect changes its position.

Jake Socha (left), a professor in biomedical engineering and mechanics at Virginia Tech, discusses research with colleagues at Argonne National Laboratory in Illinois in 2013.