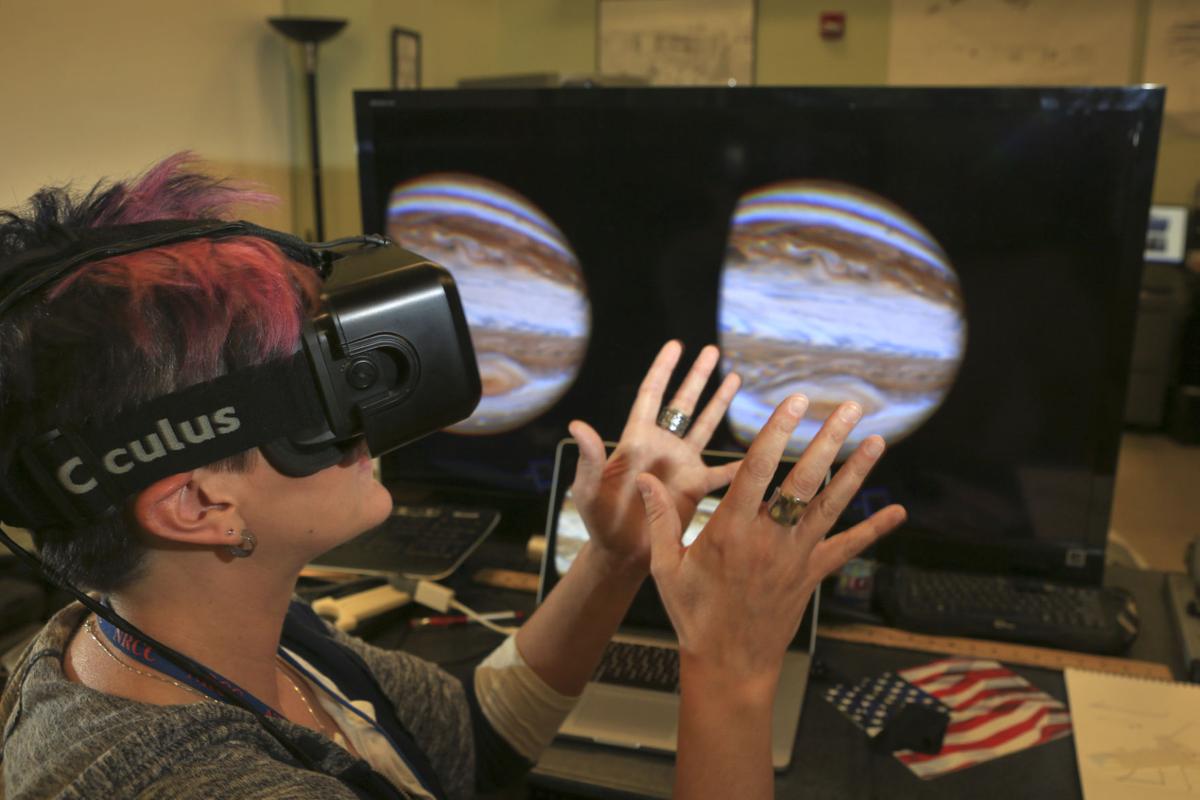 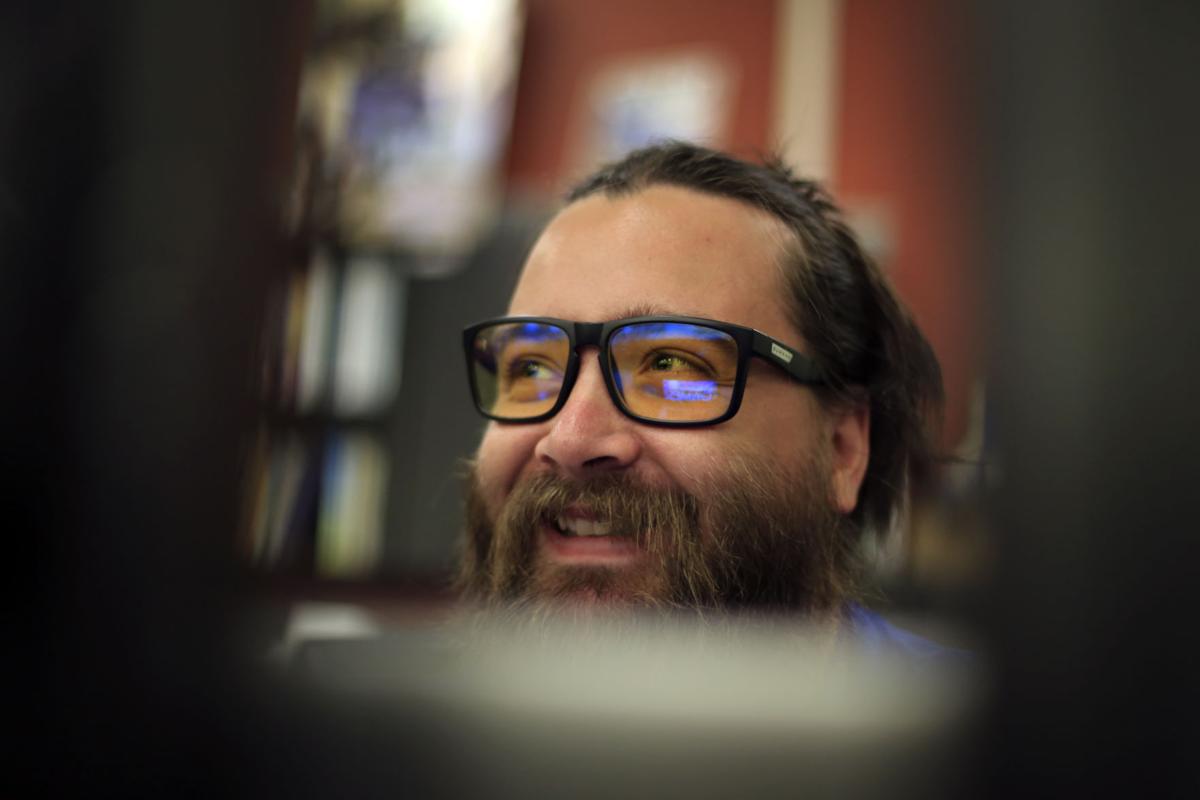 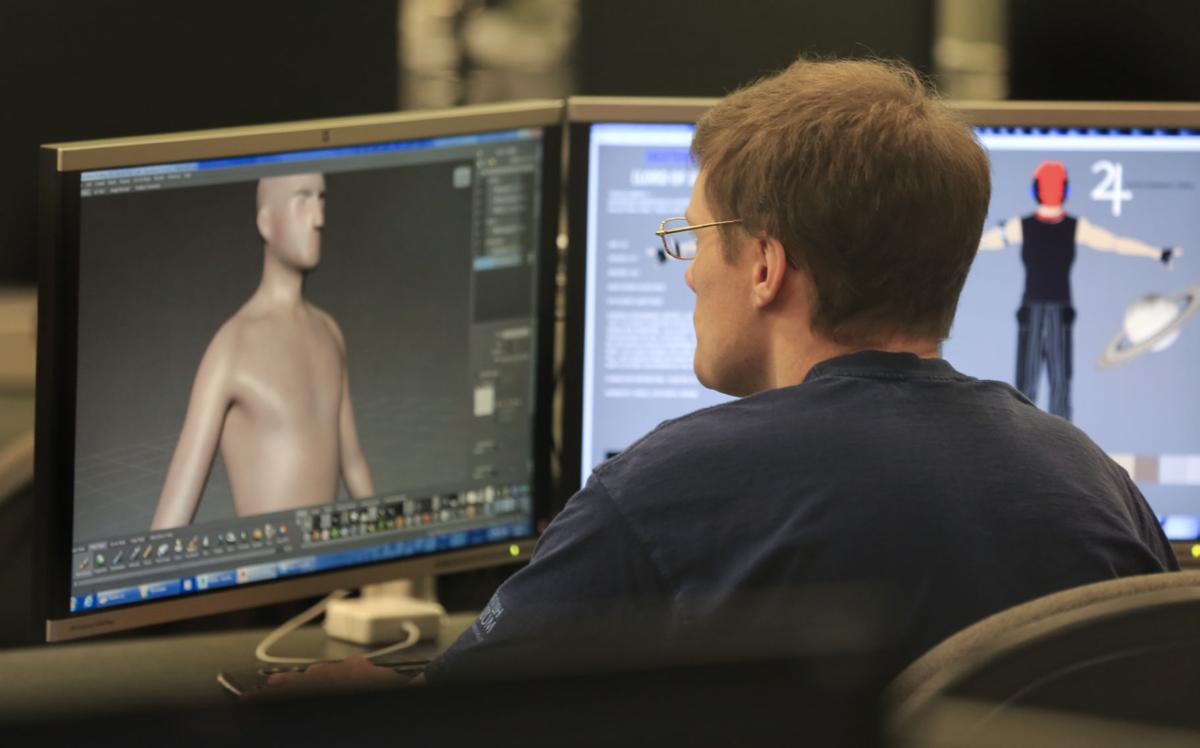 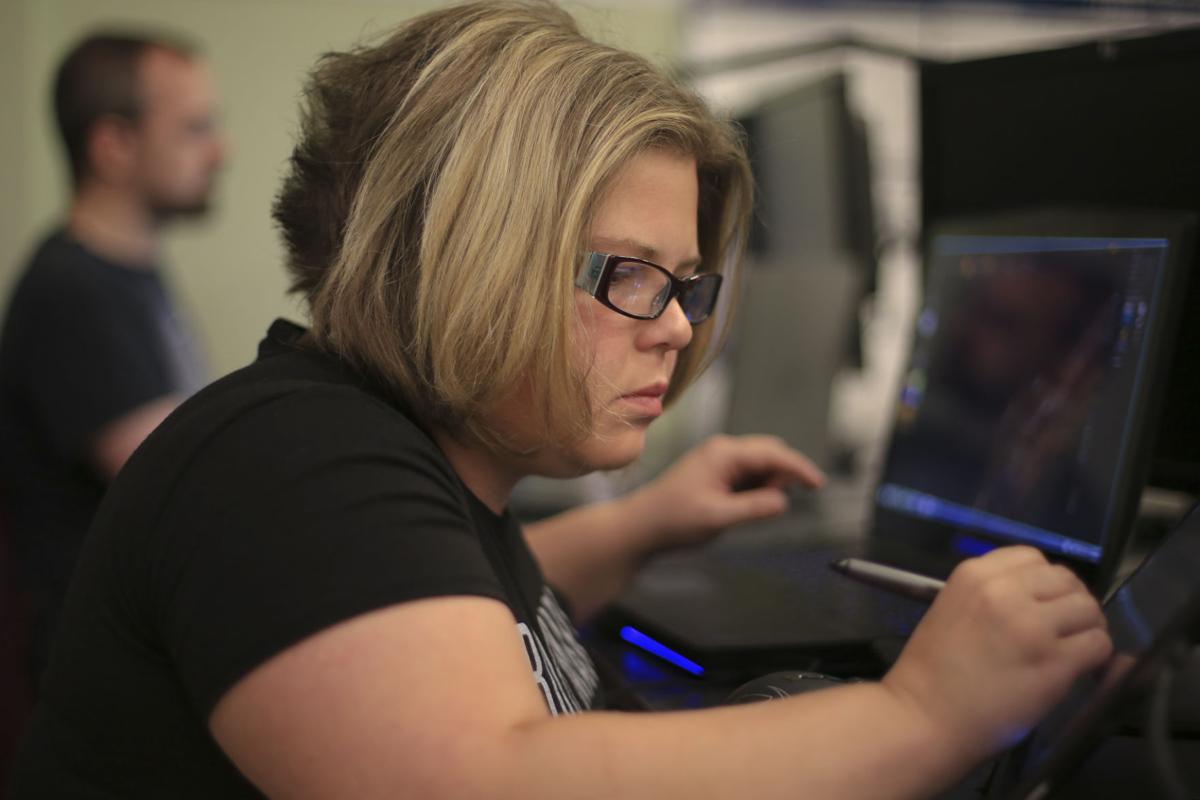 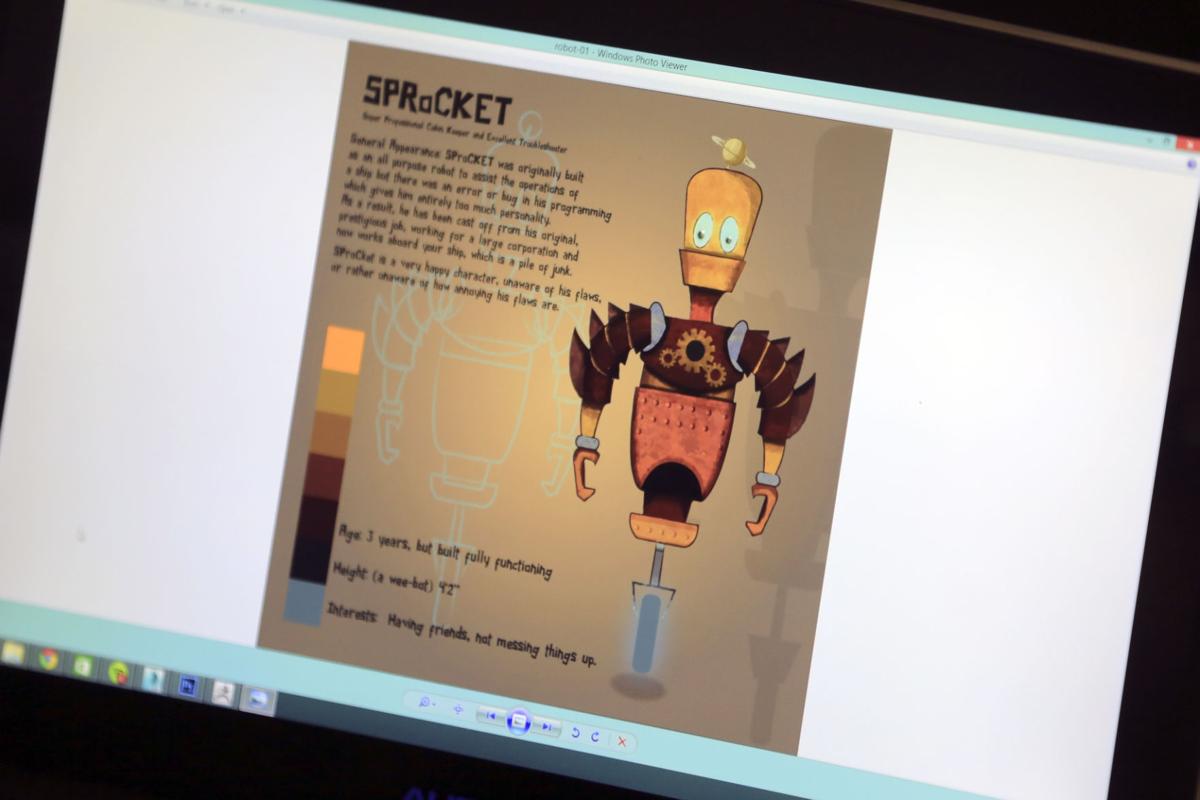 SPRoCKET is the central character being created for NRCC Game Studio’s “Hello, World,” which should be available this fall.

CHRISTIANSBURG — In a dark corner of one of New River Community College’s computer labs, a robot named SPRoCKET deleted Earth.

Your mission, if you choose to accept it via a 99-cent download to an iPhone or iPad, is to use your scientific knowledge of the Earth to collect leftover elements and save the planet.

Or at least that will be the mission once NRCC Games Studio’s mobile game, “Hello, World,” hits Apple’s App Store this fall.

Since 2010, St. Clair and fellow project leader Heather Walters have guided groups of students through the process of creating and publishing 15 similar mobile games based on the Virginia Standards of Learning. In 2012 the student volunteers began receiving school credits for their work and in 2013 NRCC Games Studio began charging for the downloads. The studio has since made more than $42,000.

“It’s unique to come to a two-year college and study games alone, but then the ability to do an internship and have a published title whenever you leave, it’s amazing,” St. Clair said.

Both NRCC graduates, he and Walters also work to develop games for the Radford-based company they helped found, Lonely Monster Games.

Professor of information technology and Games Studio director Carlotta Eaton said the NRCC Games Studio was initially funded by a $300,000 grant from the Virginia Department of Education and had an agreement to not sell the games.

That changed when the grant ended in 2012 and the school negotiated to be able to sell its existing and new content by agreeing to give VDOE five percent of the revenue.

The rest goes back into funding the studio, which Eaton said is very close to being self-sufficient — and very rare.

“We’re the only one in the state of Virginia, for sure, that does games with students that are on the app store,” she said.

Though they don’t advertise, the games have been downloaded more than 200,000 times by teachers across the country and around the globe.

Eaton said they’d even received feedback from many teachers overseas who said the games were being used to teach English as a second language.

Most of the games are focused on the elementary level math and language arts SOLs, but this year’s group of 11 interns is for the first time attempting to tackle ninth-grade content, St. Clair said.

“Hello, Earth” is planned to consist of a user traveling to planets in the solar system to obtain Earth’s elements from super heroes who live there and rebuild the deleted planet. But before the heroes give up the goods, the user must demonstrate his or her knowledge of the Earth Science according to the SOLs.

The game will also be the first time an NRCC Games Studio product will be available in 3-D. St. Clair said a version of “Hello, Earth” compatible with the virtual reality headset, Oculus Rift, is also expected to be available this fall.

Walters, who also works as a graduate teaching assistant at Radford University, said one of the best aspects of the game studio was the collaborative effort it takes to complete the project, which typically begins with big ideas about how to communicate an SOL.

“We just scale it back and trim it till we get to the point where we think, ‘This is doable,’ ” she said.

NRCC student Erika LeonGuerrero was tasked with much of the script writing and character development for the game, of which she said the user is actually the main character and hero.

“The idea behind that is to empower the player,” LeonGuerrero said.

Radford University graphic design student Lindsey Vest said she got involved with the group through Walters and very much valued being able to work in a more diverse environment than she was used to.

“I’ve never worked in a group with non-artists,” she said. “I’m thoroughly enjoying it because in class you’re competing with other artists to be the best or whatever and then you get out there, and you’re like, ‘wow, I’m not competing.’ It’s so nice.”

Vest sketches the characters, which are then shipped over to 3-D modelers, like NRCC student Chris Gregory, who use the sketches as a guide for creating a 3-D version of the character compatible with the limited processing power of a mobile device.

“What I’m trying to do is create a character that looks believable, but that’s as small as possible,” Gregory said.

Once created, the characters will be inserted into the game platform other students have created and then published at the Apple App Store, where it will be available for 99 cents.

The team of students generally works from 10 a.m. to 5 p.m. on Tuesdays and Thursdays and completes the entire process in a single semester, which Walters said was an extremely accelerated pace.

“You leave some days and your mind, it just hurts,” she said.

Though a time-consuming process with a hefty workload, Walters said seeing the group’s creation come to life makes it all worthwhile.

“It’s just a really good feeling to see it all come together. ... It’s amazing, one of the best feelings in the world,” she said.

Geeks reign: We are not alone

Last week I was grabbing a bite to eat with friends before going to see "Ant-Man."  While we were eating, the bartender came over and asked if…

SPRoCKET is the central character being created for NRCC Game Studio’s “Hello, World,” which should be available this fall.