Embarrassment to embraced: 'Denim Day Do Over' honors Virginia Tech alumni
0 comments
Share this
{{featured_button_text}}
1 of 4 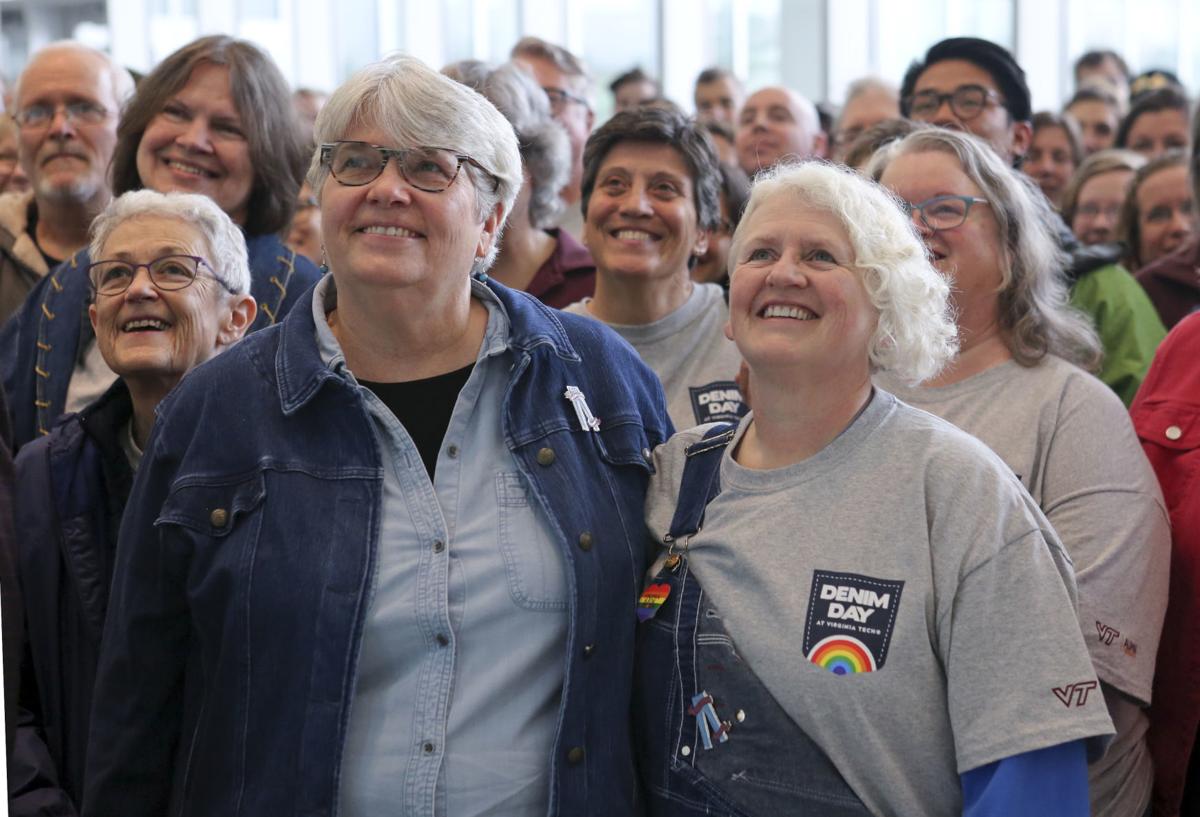 Former Virginia Tech students Nancy Kelly (left) and Helene Vachon (right) were in the Gay Student Alliance in 1979 that promoted an event that year known as “Denim Day” during the school’s first Gay Awareness Week. The Denim Day Do Over on Friday was much different from the backlash they faced 40 years ago. 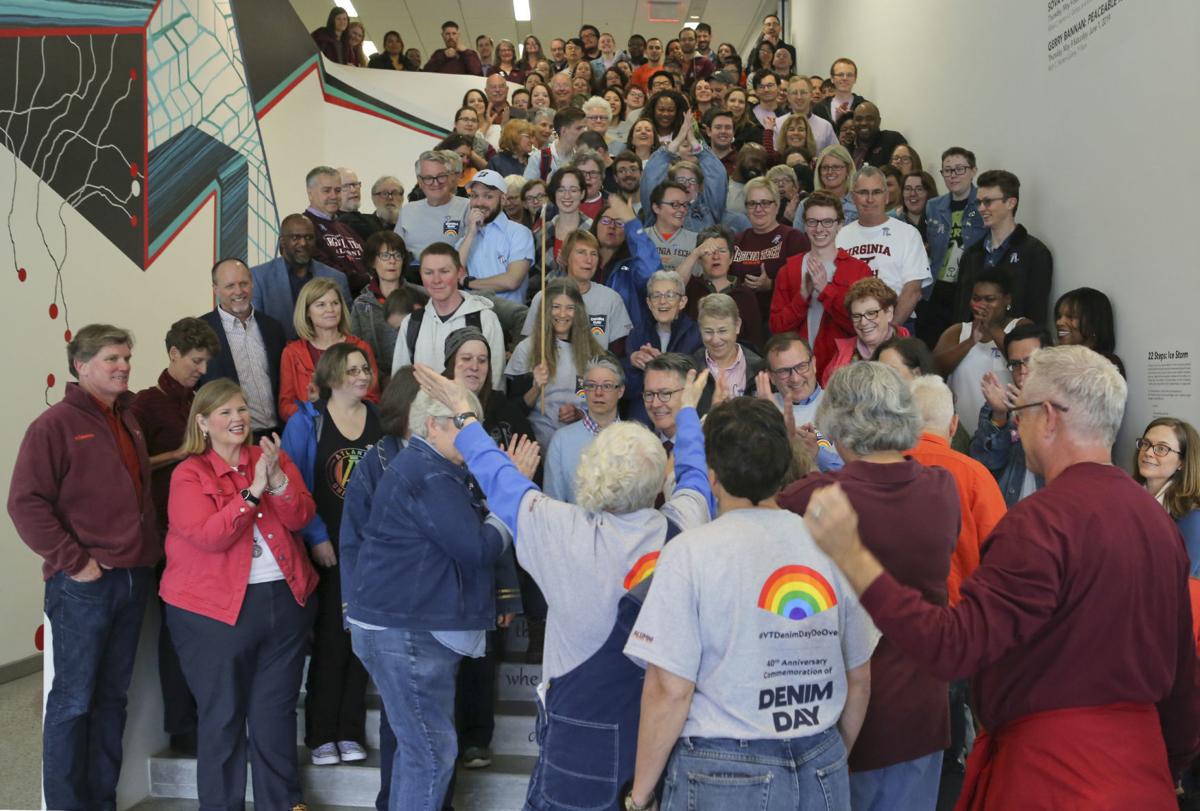 More than 100 people participated in Virginia Tech’s “Denim Day Do Over” group photograph session in the Moss Art Center Friday. 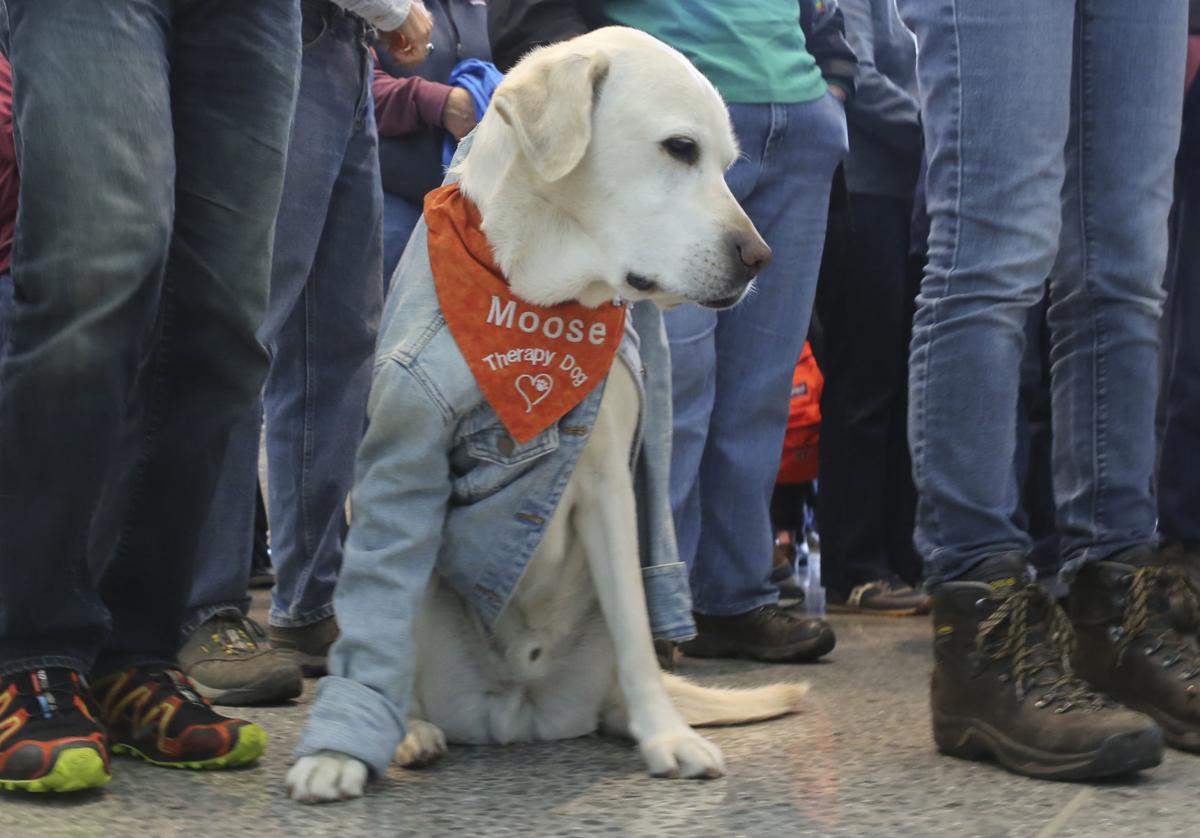 Moose the therapy dog was one of three, denim-draped dogs attending Friday’s event. 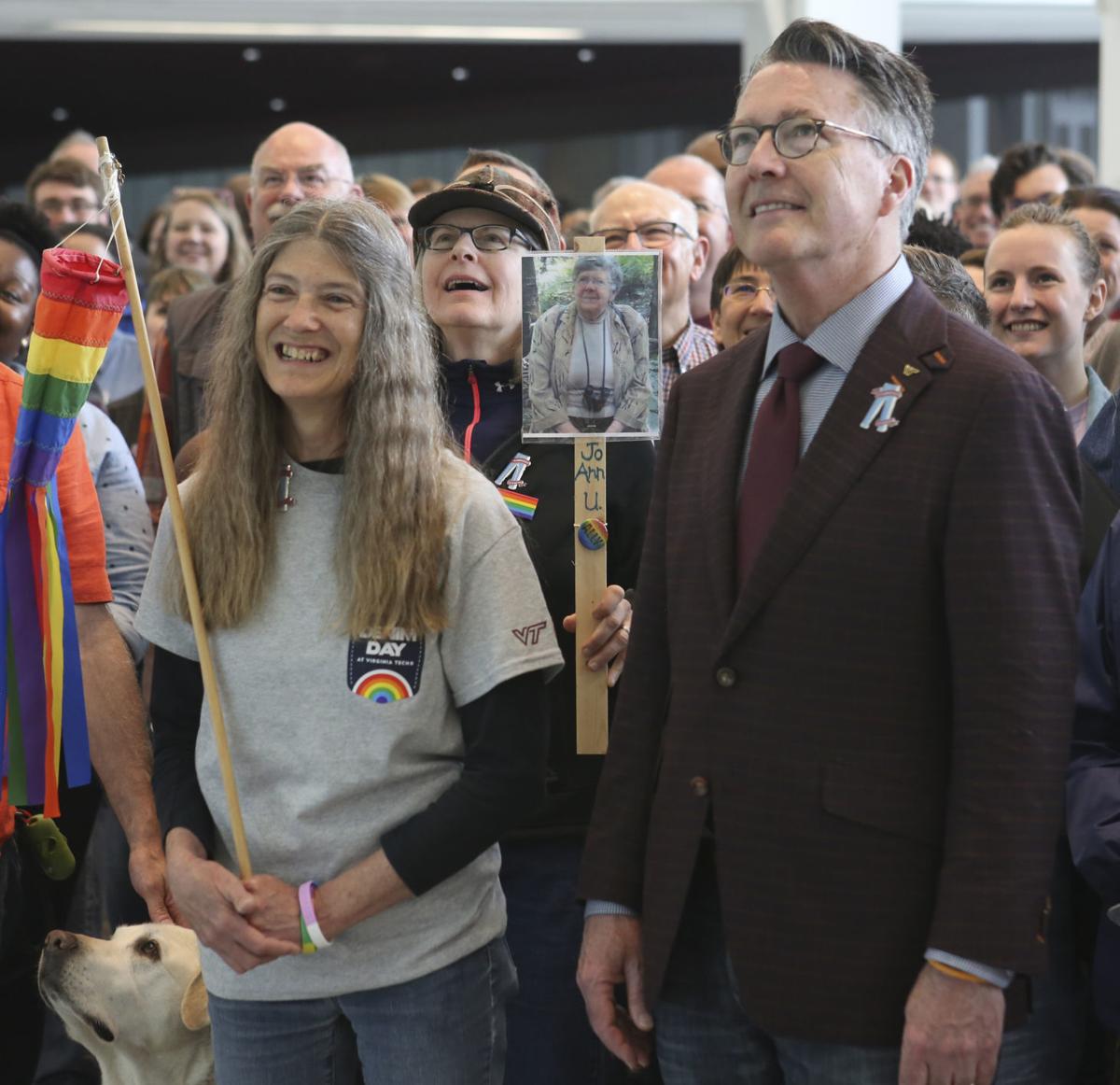 The pair — and about a dozen of their friends — never would have guessed they’d be embraced by the institution. Forty years ago they had been called an embarrassment.

They were part of the Gay Student Alliance in 1979, when that organization had promoted an event known as “Denim Day” during the school’s first Gay Awareness Week. People were asked to wear the fabric in support of gay and lesbian students.

There was tremendous backlash, sparking protests and angry letters to the editor in the student newspaper, the Collegiate Times.

But Friday was more of a celebratory affair filled with smiles, laughter and a lot more denim than had been on campus 40 years prior.

Tech hosted the “Denim Day Do Over,” with a crowd of more than 100 alumni, students and community members gathered in the Moss Arts Center for photos to commemorate the event.

“I feel like the prodigal daughter coming home,” Vachon said. “We went through a bit of hell. But I feel like I’m coming full circle and I’m finally being embraced by Virginia Tech.”

Denim Day events occurred on college campuses around the country in the years leading to Tech’s on Jan. 17, 1979.

“It was not in any way original,” Kelly said. “But what happened was epic.”

There was a visceral reaction from the surrounding community featuring a sea of khakis and corduroys.

To host a Denim Day on Tech’s Blacksburg campus was a risky idea. This was down the road from Jerry Falwell’s home base in Lynchburg, and at the time he was going on national television talking about the evils of gay and lesbian people, student organizer Steve Noll said.

“I was fresh out of the closet,” Noll said. “And I just decided I was tired of the crap.”

So he got together with the other student leaders to get organizing. Kelly said she recalls about 20 students in the club.

Scott Beadle, another student leader of the organization, said he wanted to make people protesting the event uncomfortable. Putting on jeans every day was simply the norm for students at Tech. To go without them was unpleasant — as was life for gay and lesbian students at the university at the time, he said.

The event was first advertised in the Collegiate Times. It sparked a war of letters to the editor both in support and in opposition to the event, according to a collection maintained by Tech’s Special Collections.

Pictures in the newspaper show men dressed in denim skirts, mocking participants, as well as a man wearing a shirt saying “I have male genes not gay jeans.”

The offensive images and vitriol in the letters — as well as the hate described in a series of oral histories collected by Tech archivists — illustrates how Tech has moved along, said Anthony Wright de Hernandez, a Tech library community collections archivist and inclusion and diversity coordinator.

After the event, Kelly said, she and a group of students including Beadle were summoned to Burruss Hall for a meeting with then-Vice President for Student Affairs James Dean.

Kelly said he told them they were an embarrassment to the university and then-Gov. John Dalton had called concerned about Denim Day at Virginia Tech. The group had gotten a lot of attention, although it was largely negative.

The following year, the Gay Student Alliance was prevented from having a Denim Day again. By 1981, the group was fading away, Beadle said.

Rising from the dead

The blowback from the Denim Day experience in 1979 left a sour taste in Kelly’s mouth. She said she wanted nothing to do with Virginia Tech.

When she received a phone call soliciting an alumni donation after graduation, she said, she acted like someone else and told the caller she was dead.

“I wasn’t treated well and I just wanted to forget about it,” Kelly said.

But as the years wore on, Kelly said, she thought about Tech and her experience less and less. Until one day, after speaking with some students about the experience at Duke University where she works today, she thought maybe she should reconnect.

She happened to know the brother of Tech spokeswoman Tracy Vosburgh, who gave Kelly the names of some people including Latanya Walker, Tech’s director of alumni relations for diversity and inclusion.

Walker said she instantly wanted to commemorate those mistreated alumni and she wanted to do it in an honest way.

“Underrepresented communities [of alumni] want to connect with students in their communities,” she said.

Embracing the community is the morally correct thing to do in connection with the university’s principles of community, Sands said.

“It’s about embracing the talented people we’ve already got and broadening the pool of talented people here,” Sands said. “If your aperture is narrow you’re not going to get the best people at the university.”

It’s also important to be truthful to the past and acknowledge that past to move forward, he said.

The natural timing to get people back together was during Pride Week on Tech’s campus this week, said Luis Garay, director of the LGBTQ+ Resource Center.

There were a wide array of events at Tech over the course of the week, including talks, fellowship gatherings and a dance for alumni and students.

The bravery of those who came before is commendable, said John Livingston, a student leader in Tech’s LGBTQ+ Resource Center and HokiePRIDE of Virginia Tech.

“I think it’s really awesome for students to see ‘I can be out and proud,’ ” Livingston said.

Many challenges remain, though.

According to an independent “Report on Programs and Services for LGBTQ+ Students at Virginia Tech,” conducted by a Michigan State professor, surveyed students don’t report a lot of open hostility. However, there are still problems.

“LGBTQ+ students reported that they often feel invisible and unheard, and have been subject to acts of bias, hostility, and discrimination,” according to the report.

It recommends a number of improvements the university could make including: developing plans to increase communication between LGBTQ students and administrators, increasing resources and developing the direction of the resource center, and actively recruiting LGBTQ staff for the Cook Counseling and Schiffert Health Centers.

Those will be things the school will look at as it is honest with itself, Perillo said.

That the university has taken any steps forward —and will look at more moving forward — is mindblowing for the alumni who came back for the Denim Day Do Over, they said.

For Kelly, it’s great to be embraced.

“I have been incredibly impressed. I’ve been welcomed and our story has been authentically told,” Kelly said. “There’s a lot to celebrate here. The fight’s never over and it’s never done.

“I’m just very happy and I feel very glad that we have gone on this journey.”

Watch Now: Tools to help you find the vaccine

Watch Now: Tools to help you find the vaccine

Trillions of cicadas about to emerge

Trillions of cicadas about to emerge

The high school is making plans to hold a seniors-only prom at Parkway Marina in Bedford County, and an outdoor graduation ceremony at Cy Dillon Stadium.

Former Virginia Tech students Nancy Kelly (left) and Helene Vachon (right) were in the Gay Student Alliance in 1979 that promoted an event that year known as “Denim Day” during the school’s first Gay Awareness Week. The Denim Day Do Over on Friday was much different from the backlash they faced 40 years ago.

More than 100 people participated in Virginia Tech’s “Denim Day Do Over” group photograph session in the Moss Art Center Friday.

Moose the therapy dog was one of three, denim-draped dogs attending Friday’s event. 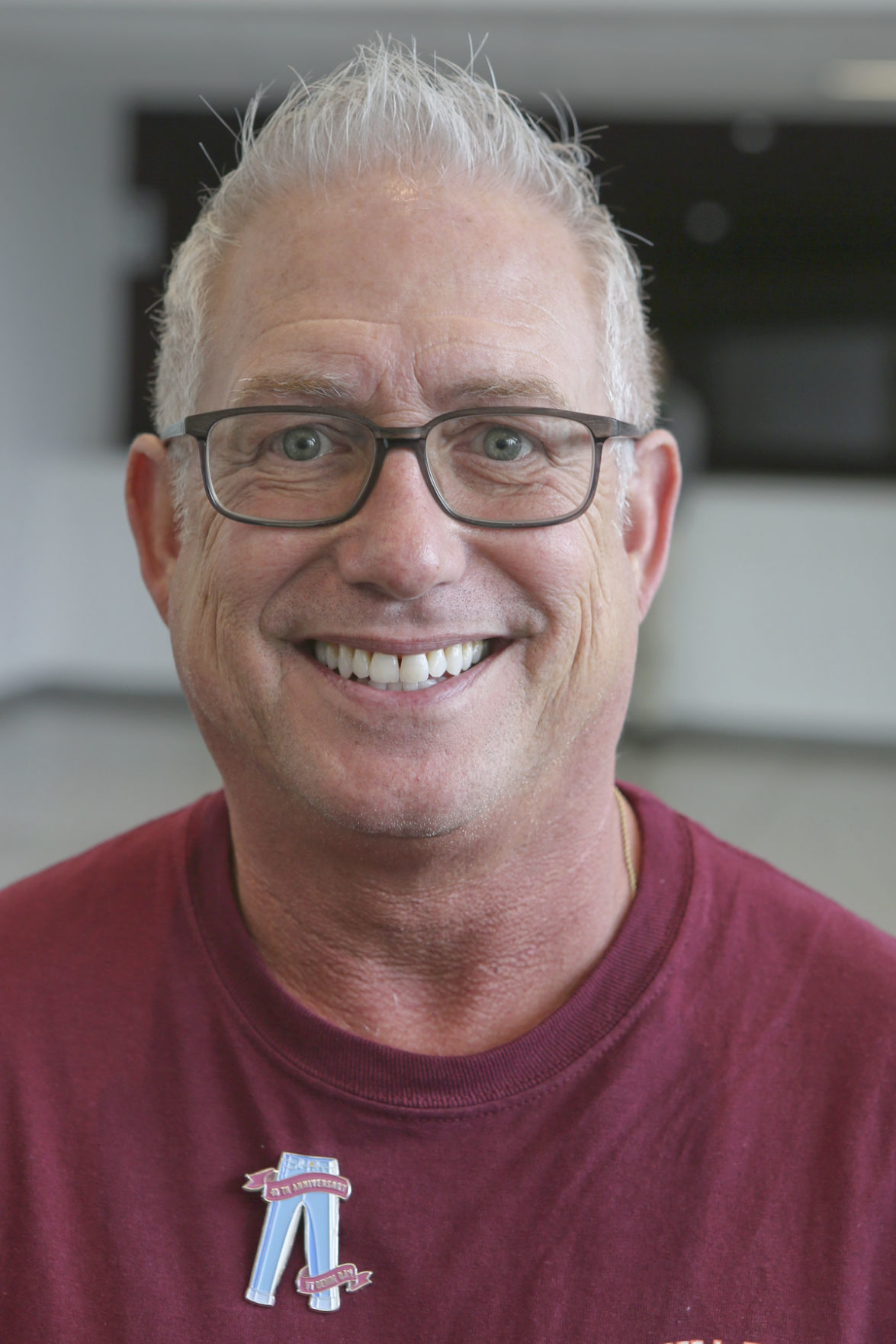 Scott Beadle One of the organizers of the original Denim Day in 1979.