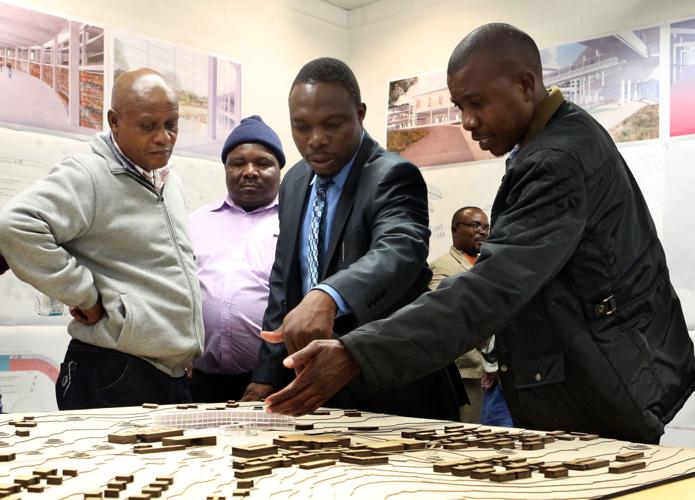 Simeon Gwayi, center, and members of an 11-member delegation look at a relief model of a proposed Mzuzu University library building in Virginia Tech’s Cowgill Hall. Gwayi is director of studies at the African school. 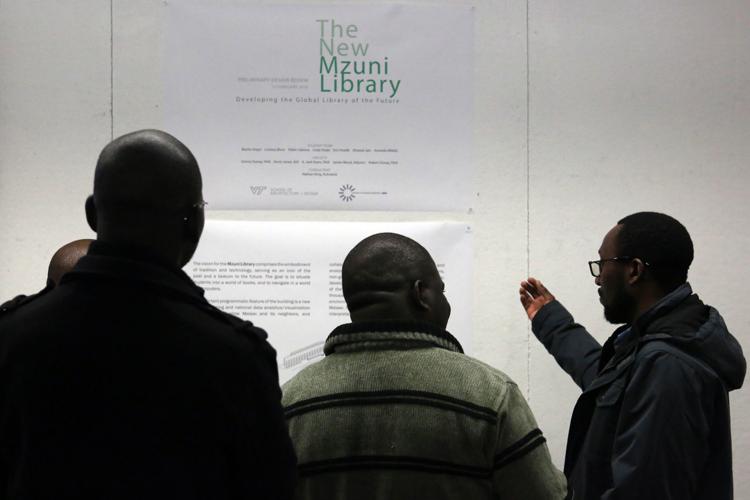 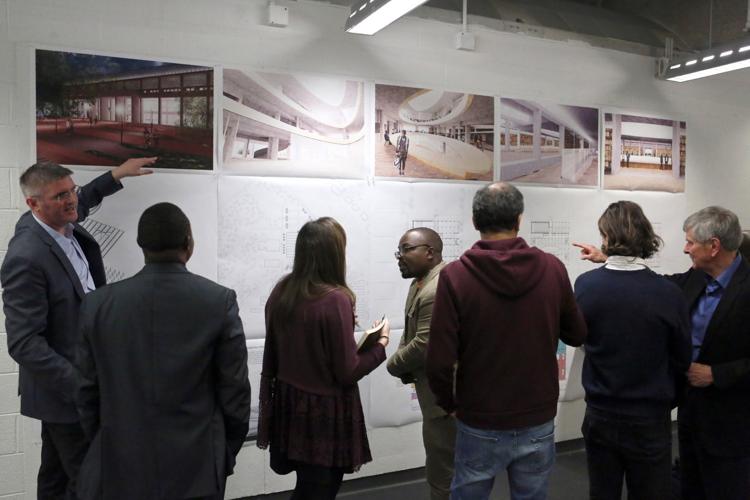 BLACKSBURG — Simeon Gwayi likes to talk about his African university’s friends from the United States.

His school, Mzuzu University in northern Malawi, has partnerships with Michigan State and Auburn University to name a couple. But there’s one school that holds a special place in his heart, the place he got his doctorate in education in 2009: Virginia Tech.

That’s because Mzuni, as the school is known there, has gotten a lot from Tech. And people at Tech have gotten a lot in return.

Mzuzu University was established in 1997 as Malawi’s second university. It is located in the northern part of the country and currently has about 4,000 students.

The relationship dates back 20 years, but in 2016 a group of Tech students and faculty led an effort to donate books to the African university after a 2015 fire destroyed their library.

To date, they’ve shipped about 10,000 books. They’ve collected thousands more that they hope to send later this spring, said Ralph Hall, a Tech professor of Public and International Affairs who has led the collaboration.

But Hall and a group of faculty and staff in Tech’s College of Architecture and Urban Studies didn’t want to just give the people at Mzuzu University a bunch of books. They’re taking it a step further now and helping them design a home for the tomes.

A team of four architecture professors and eight students have put together a trio of conceptual designs that will in turn be used by local architects to eventually design and build what will be a crown jewel building in a region where 92 percent of homes don’t have electricity.

“Our role is really to provoke discussion,” said Robert Dunay, a Tech architecture professor who is leading the project.

The group travelled to Mzuzu last year to check out the campus and talk to people at the university to figure out the school’s needs. They’ve also worked with folks currently working at the university, including an 11-member delegation who came to Virginia Tech this week to collaborate and discuss the project. They’ve also spoken with the American ambassador to Malawi.

Funding for the project, which is difficult to predict now, Dunay said, but will likely cost about $5 million to build, will come from the Malawi government. Much of the country’s funding comes from United States foreign aid. In fiscal year 2016, the U.S. government gave the country $188 million in assistance.

Martin Angst, one of the Virginia Tech students working on the project, said it was apparent that people there wanted the building to be a central piece of the university — not only as the home to its books, which serve as a repository of knowledge, but also as a gathering point and welcoming space.

He said the group also wanted to work collaboratively among themselves and with the people from the university. People like Amos Kalua, a graduate student in the architecture college who worked as a faculty member at Mzuzu University and hopes to return to teach architecture there in the future.

Kalua said he’s been trying to help his Tech partners understand more about the school as they’ve come up with their designs.

“I want to give them an idea of spirit of place,” he said.

The campus is surrounded by forest, and students and teachers often call themselves “green intellectuals,” he said. So, the Tech designers have tried to put in more windows to soak in the natural beauty of the campus and give the building a modern, sleek look, Angst said.

Hall says he hopes the relationship will continue after the library is built. There are designs to the building that should make technology available in Blacksburg also accessible to the Mzuzu students.

Hall said he believes that initiatives at the universities will be able to work in tandem to create a strong partnership for years to come.

“It’s an ecosystem we’re trying to create right now,” Hall said. “The library is a way of anchoring that and pulling us together.”

Regardless of what does or doesn’t happen in the future, the project has still been a positive opportunity for students, said Jack Davis, the former dean of the architecture college who now works as a professor. Davis is one of the professors helping to lead the project.

“The educational accomplishments here are pretty significant,” he said.

And for the students on a personal level, it’s been a fantastic opportunity, said James Wood, who recently graduated from Tech but has stayed on to help out with the project.

“It’s really a thrill to work at something like this,” Wood said. “The scale, the scope of this project… has opened up the world to me. It’s fulfilling.”

Simeon Gwayi, center, and members of an 11-member delegation look at a relief model of a proposed Mzuzu University library building in Virginia Tech’s Cowgill Hall. Gwayi is director of studies at the African school. 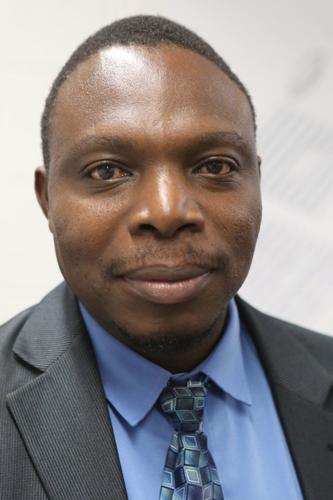