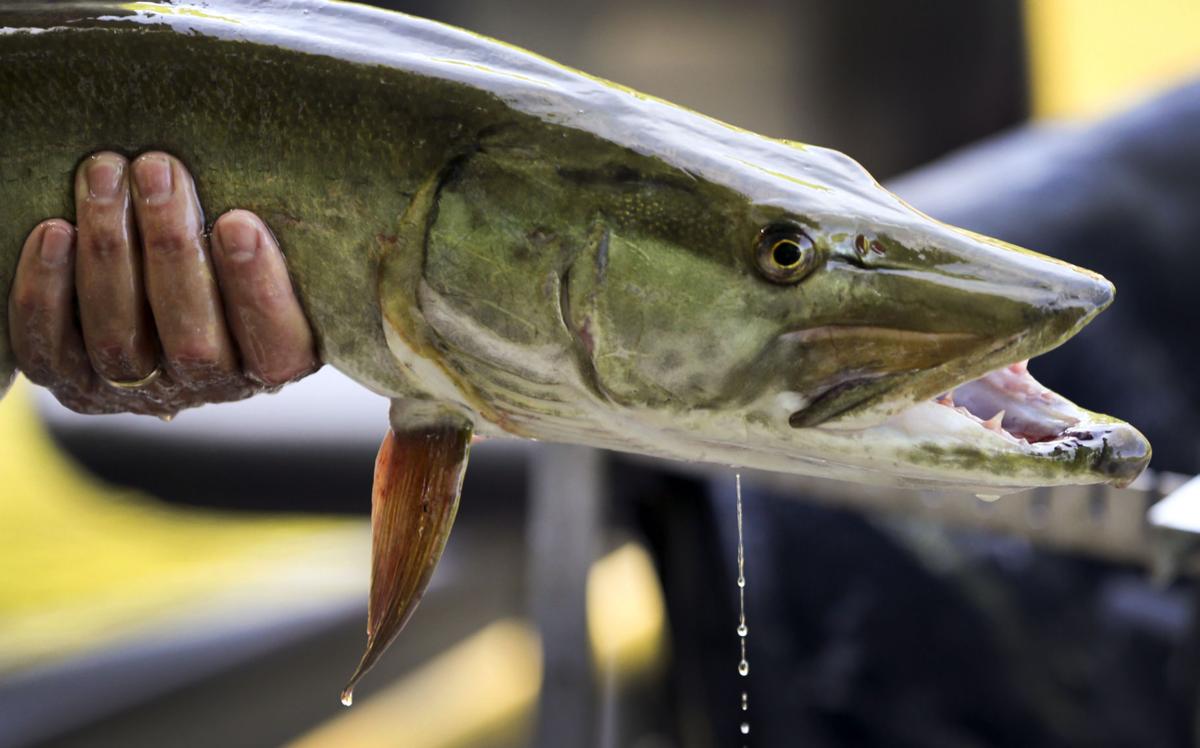 Muskellunge No. 35478 was caught, studied and released in the New River, which is developing into one of the finest muskie spots in the country. 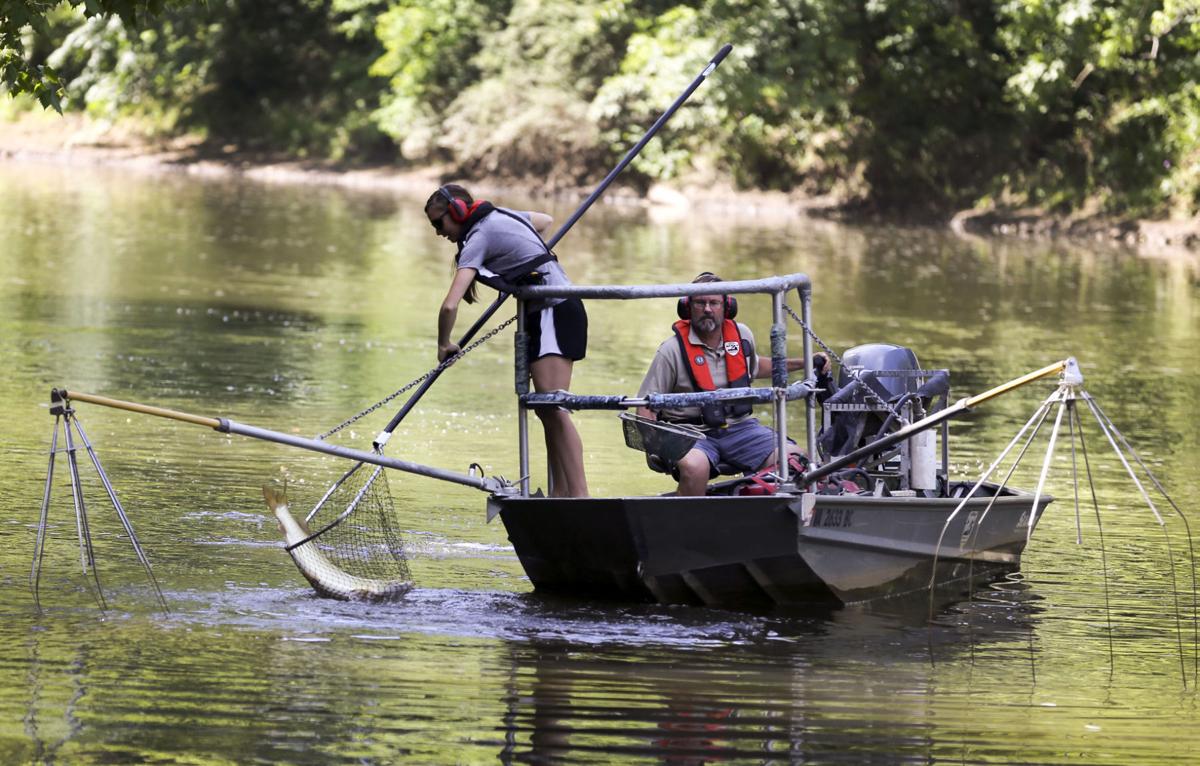 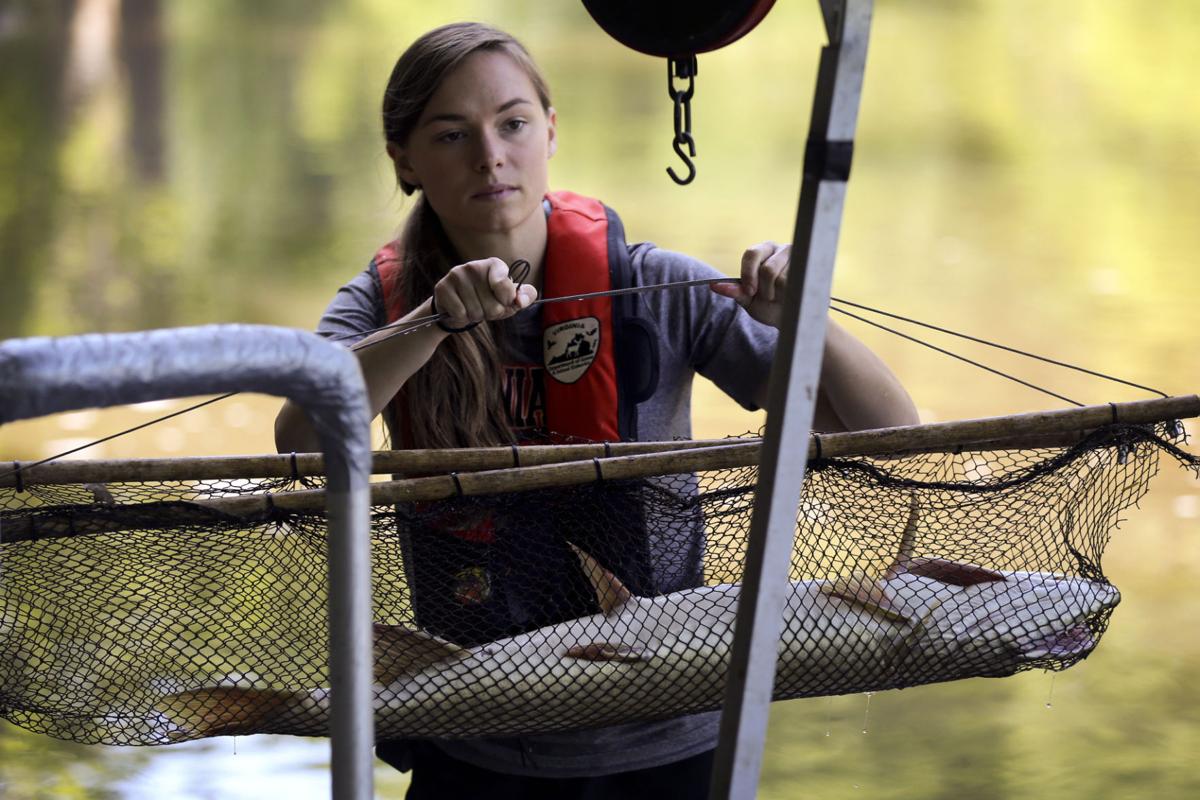 Sasha Doss, a Virginia Tech fisheries graduate student, weighs a muskie. Fish No. 35478 is 42 inches long and weighs about 13 pounds and had been captured twice before. 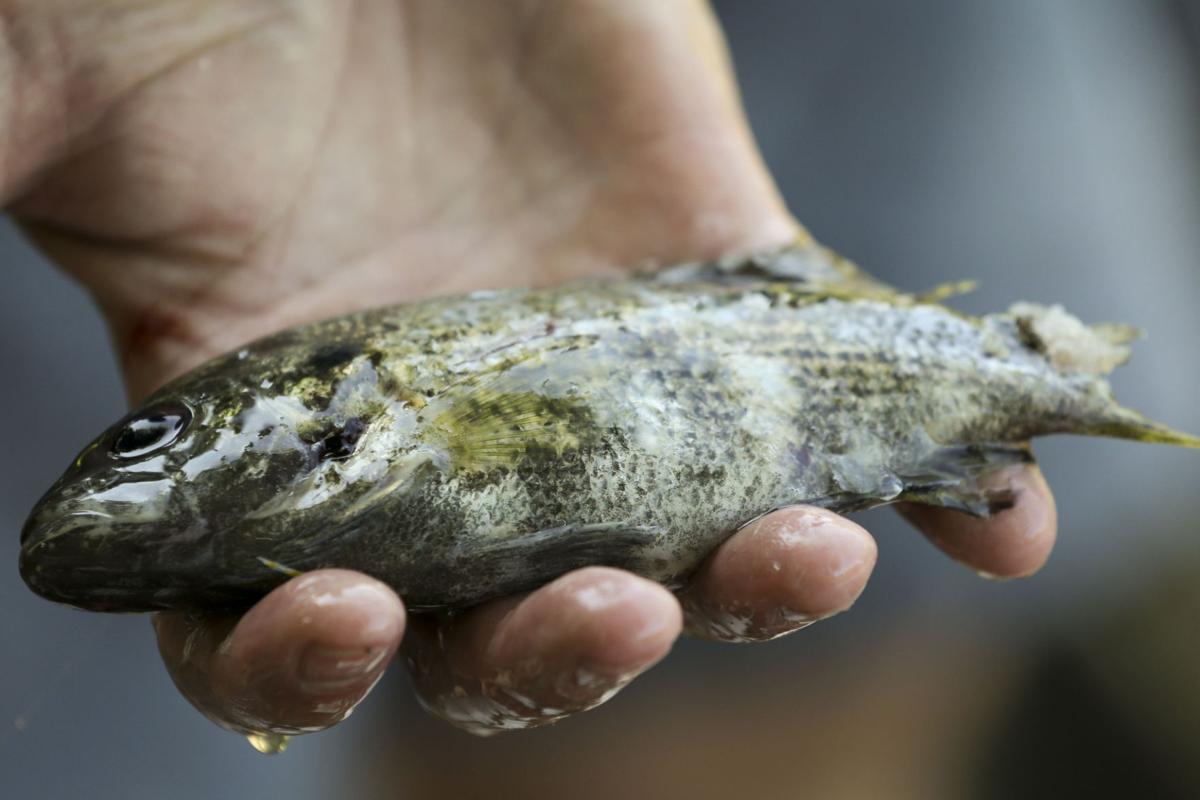 A partially consumed rock bass was removed from the stomach of a 42-inch muskellunge near Radford. 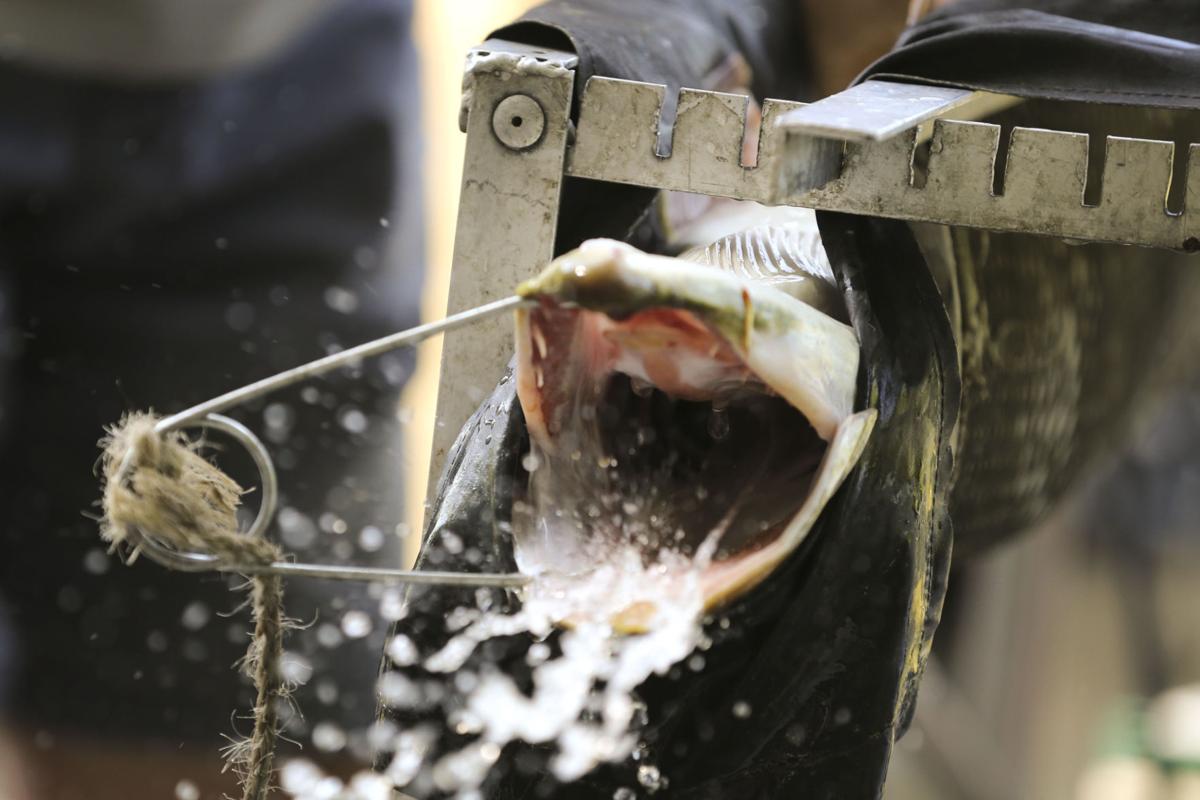 A 42-inch muskellunge is flushed with water and its stomach pumped while in a cradle. The procedure is done to examine the contents of the fish’s stomach. 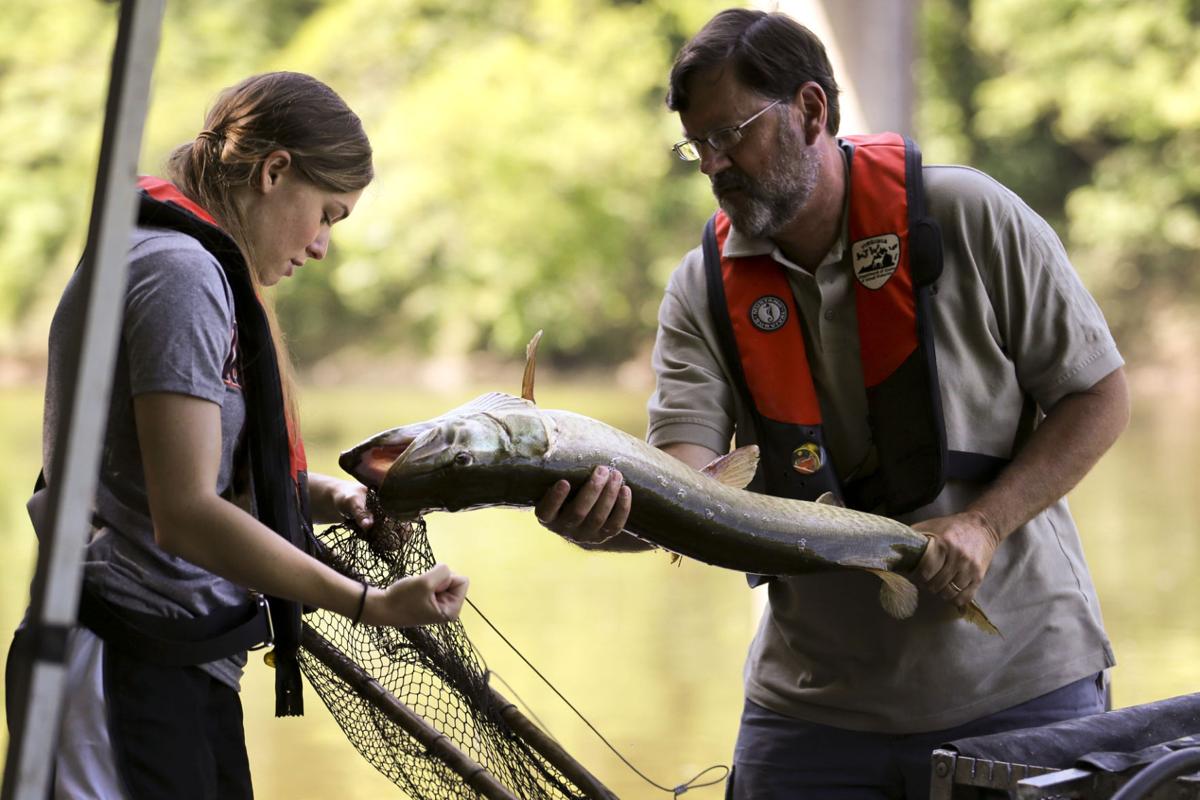 Sasha Doss, a Virginia Tech fisheries graduate student and Joe Williams of the Virginia Department of Game and Inland Fisheries remove a muskellunge from a net after catching it late last month. 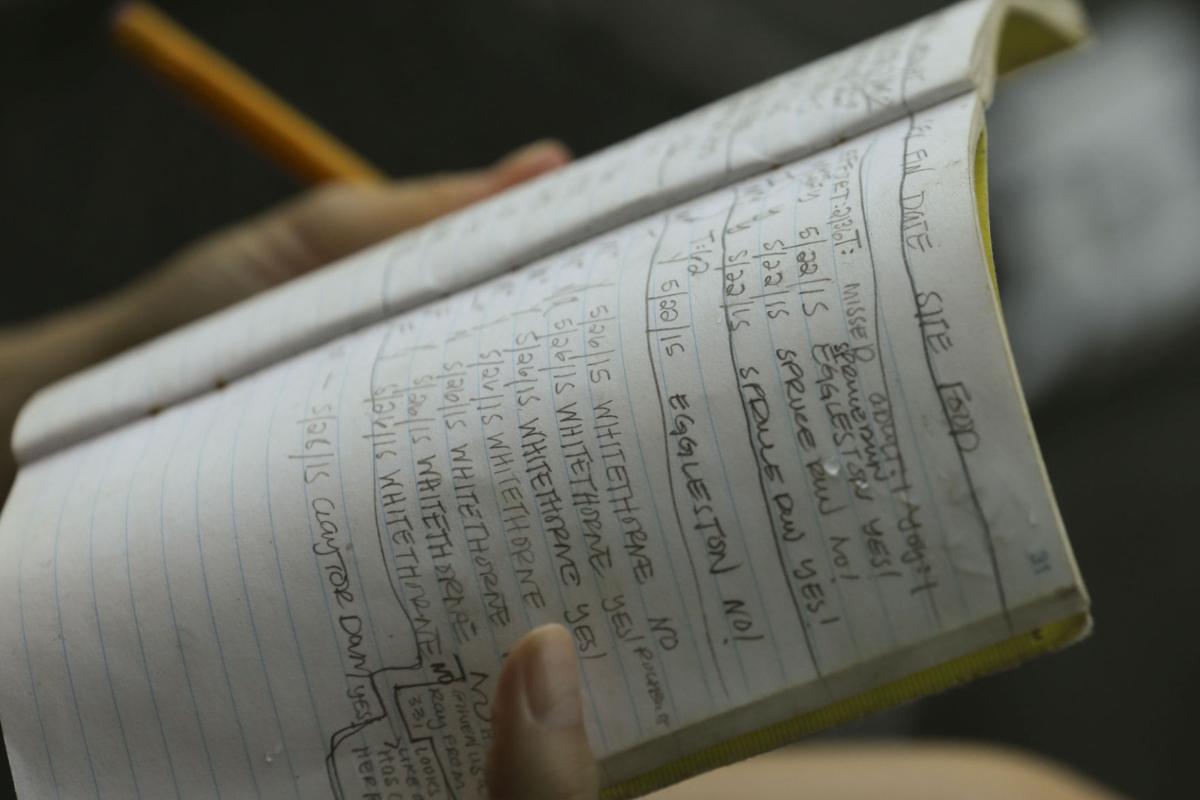 RADFORD — In the waters of the New River below Claytor Dam, Sasha Doss and Joe Williams are searching for a river monster.

Extending from their bass boat is a spindle of electrodes dipping into the murky water in an attempt to send an electric current through a muskellunge to stun the fish and bring it on board.

Doss, a master’s student studying fisheries and wildlife at Virginia Tech, stands poised with a long net at the front of the boat. Williams, a biologist with the Virginia Department of Game and Inland Fisheries, slowly pilots the boat along the shoreline

They want to catch muskies — as they’re commonly called — to study their diets and population patterns. On a sunny morning late last week the pair was lucky enough to shock a fish and net it into their boat.

Muskie No. 35478 had twice been caught as a part of the study, as was revealed by a scan of the microchip previously placed in the fish.

Doss measured and weighed the muskie and Williams recorded the numbers in a notebook. The fish wasn’t cooperative, flopping and flailing in its attempt to escape.

What’s coming is a jet of water in the fish’s stomach. Then, Doss and Williams will get the fish to regurgitate the contents of its stomach into another net to be put in a sample bag and analyzed at a lab on Virginia Tech’s campus.

The researchers want to determine what makes up the diet of one of the dominant fish species in the New River food chain in order to see its effects on the New River underwater ecosystem, they said.

The study is being conducted by Virginia Tech and funded by VDGIF.

The muskies they’ve sampled during the cooler months of the year often have bellies full of a wide variety of fish, and a few have even eaten birds. Fish No. 35478 has a small rock bass in its stomach.

The fish have no predator in the New River other than humans. And even though conventional wisdom might make folks assume that the fish that has little competition would drive other species out, researchers have found no measurable negative impact that muskie have had on other species of fish in the river, Williams said.

Muskies can grow to be large — the record fish in Virginia pulled out of the New River weighed more than 45 pounds and was 4-and-a-half feet long — and they continue to grow larger and grow in numbers in the New River. The size is necessary for a fish that recreational anglers seek out for the thrills and challenge of catching.

Muskies were first put into the New River in 1972 in an effort to expand angling opportunities in the river because muskies have the potential to be a trophy fish, according to Williams. Recently, the fish has become incredibly popular for anglers seeking a challenge — especially in colder weather when it’s less popular to fish for other species.

But over the years, muskies have gotten a bad reputation with anglers who prefer fishing for bass.

Fishermen and guides have complained that muskie drive down the smallmouth bass population — a potential drawback for local guides and anglers because the New River often is a leader for the most trophy smallmouth caught in Virginia annually.

In angler survey data collected by VDGIF, many people who fish on the river report that they dislike muskies, believing they feed on smallmouth.

However, the dietary study — as well as one conducted in 2003 — revealed that smallmouth bass make up only a small part of the muskie’s diet.

Only large adult muskies have smallmouth in their diet. And of those muskies that are 32 inches or longer bass make up 9 percent of their diets, the study found. That number is insignificant compared with the amount of other fish — especially suckers — that are found in muskies’ diets, Williams said.

“It does not look like the muskie are negatively impacting any of the other species in the river,” Williams said.

Britt Stoudenmire, a guide for New River Outdoor Co. in Pembroke, said during his 12-year career on the New River he’s only been taking people on muskie trips for the past four because of the fish’s growing popularity. But much of the time he goes out the river, the fish will present a challenge.

“Every muskie you catch, there’s a story involved,” Stoudenmire said with a laugh.

He said that the fish is big and violent, always hard to land in the boat.

Muskies also present challenges for smallmouth fishermen when they’ve got a fish on the line. As anglers reel those fish in, muskies will see the fish thrashing and coming to the surface and decide to attack. Last week during a fishing trip Stoudenmire said he lost two smallmouth bass to a couple of cunning muskies who followed his boat.

Stories like Stoudenmire’s of muskies stealing smallmouth are common and lead many anglers to believe that smallmouth bass are a major piece of the predatory fish’s diet.

But Doss said that it’s a unique situation. Muskies see smallmouth flopping in the water and battling toward the surface and they look like a wounded fish that will be easy to pick off.

“Put a t-bone steak in front of a lion and he’s going to eat it,” Doss said. “It doesn’t mean that a lion is mostly eating steak in the wild.”

But anglers’ concern for a lack of smallmouth isn’t unfounded.

In the late 1990s and early 2000s, VDGIF discovered that the spawns of smallmouth bass were not very successful. As the agency monitored the population researchers noticed they were catching fewer smallmouth bass during that time.

However, recent studies conducted by VDGIF suggest that the spawns in the last five years for smallmouth bass have been more successful. But, that’s a trend other species of fish have experienced as well.

In fact, VDGIF had been stocking muskies in several spots from Claytor Dam up to the West Virginia border in the New River every other year since 1972. For the past four years, muskies have been naturally reproducing in that section and fish haven’t been introduced, Williams said.

Currently, VDGIF has no plans to stock the New with more muskie. The fish is under control because of a large rise in anglers seeking it out, Williams said.

So the fishermen looking for thrills can continue to seek out the toothy fish with “a face only a mother could love,” for a long time, Doss said.

All it will take is patience and a lot of casts for folks to land a muskie.

“Every deep pool in the river from here [Claytor Dam] to West Virginia is likely to have a muskie in it,” Williams said.

Muskie will eat just about anything that moves in the water. In the last three years biologist Joe Williams, with the Virginia Department of Game and Inland Fisheries, said he's helped pump the stomachs of fish about 300 times. Each year, a bird has been found inside a muskie stomach at least once.

But despite the belief that muskie prey on smallmouth bass, the study Williams has participated in conducted by Virginia Tech has shown that bass only make up a small piece of muskie diets.

Percentage of fish biomass found in the stomachs of muskie that were more than 32 inches long (smaller muskie caught in the study didn't eat any bass):

A judge has dismissed civil allegations of wrongdoing brought by a former Virginia Tech student against two police officers.

Virginia Tech Day of Remembrance to include virtual run

To mitigate the spread of COVID-19, Virginia Tech will not hold public gatherings in April to commemorate the 2007 campus shooting.

There are various plans, ideas and local initiatives floating around Virginia to help local governments repair or replace aging schools, but no consensus on how to pay for such an effort.

Muskellunge No. 35478 was caught, studied and released in the New River, which is developing into one of the finest muskie spots in the country.

Sasha Doss, a Virginia Tech fisheries graduate student, weighs a muskie. Fish No. 35478 is 42 inches long and weighs about 13 pounds and had been captured twice before.

A partially consumed rock bass was removed from the stomach of a 42-inch muskellunge near Radford.

A 42-inch muskellunge is flushed with water and its stomach pumped while in a cradle. The procedure is done to examine the contents of the fish’s stomach.

Sasha Doss, a Virginia Tech fisheries graduate student and Joe Williams of the Virginia Department of Game and Inland Fisheries remove a muskellunge from a net after catching it late last month.