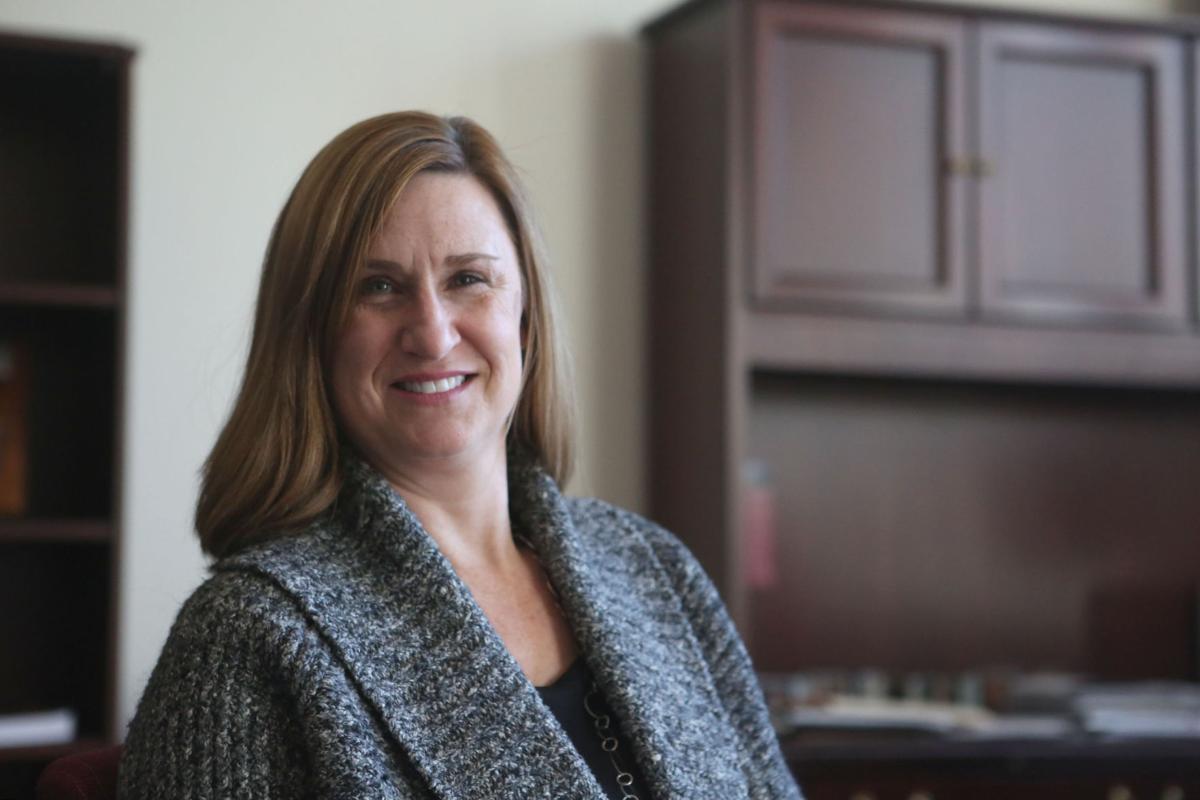 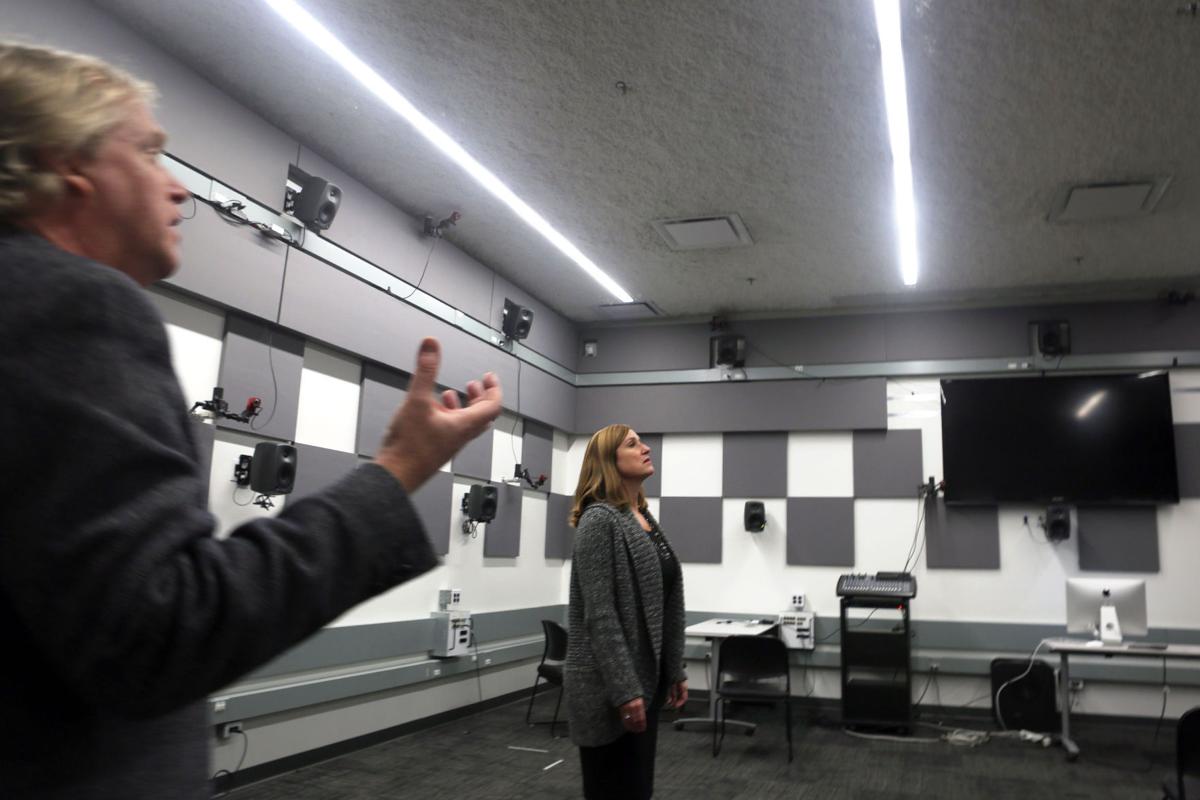 Virginia Tech College of Engineering Dean Julia Ross listens as Benjamin Knapp, director of the Institute for Creativity, Arts and Technology and a professor of computer science, shows her a studio in the Moss Arts Center that is engineered for sound. 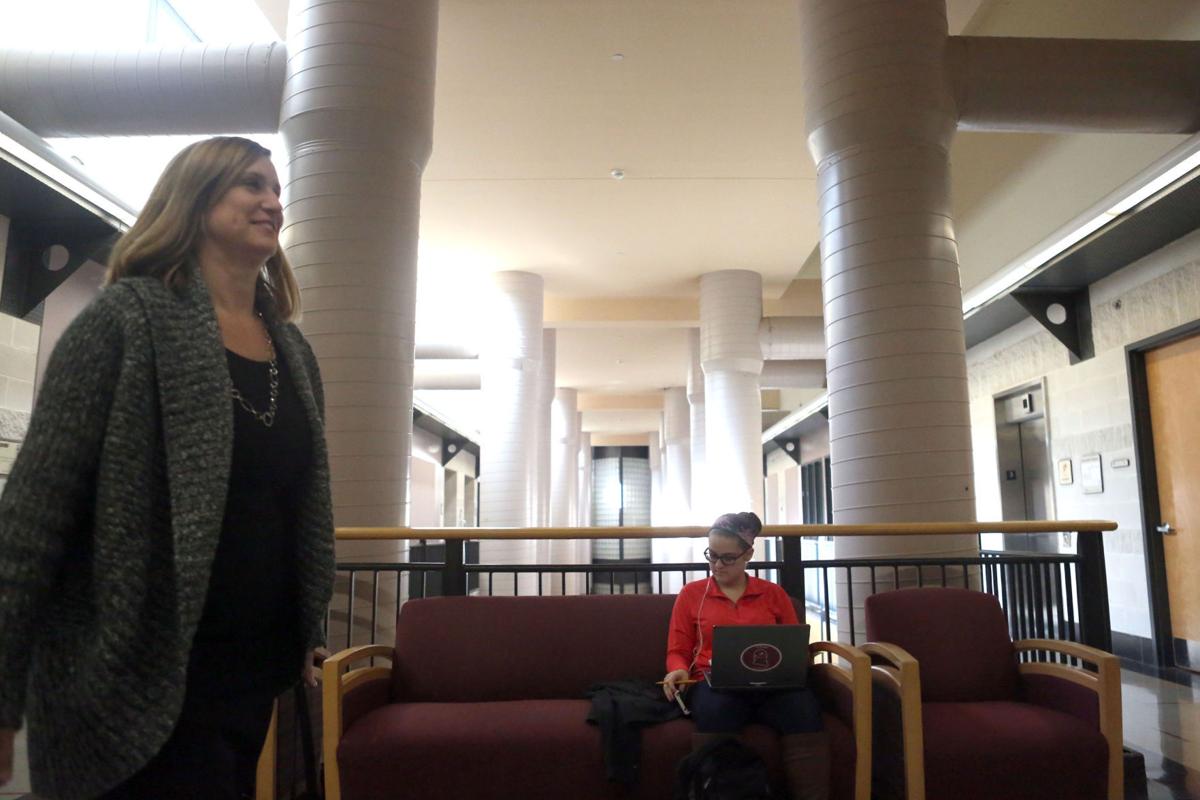 Julia Ross walks through Torgersen Hall on her way to an appointment Monday. 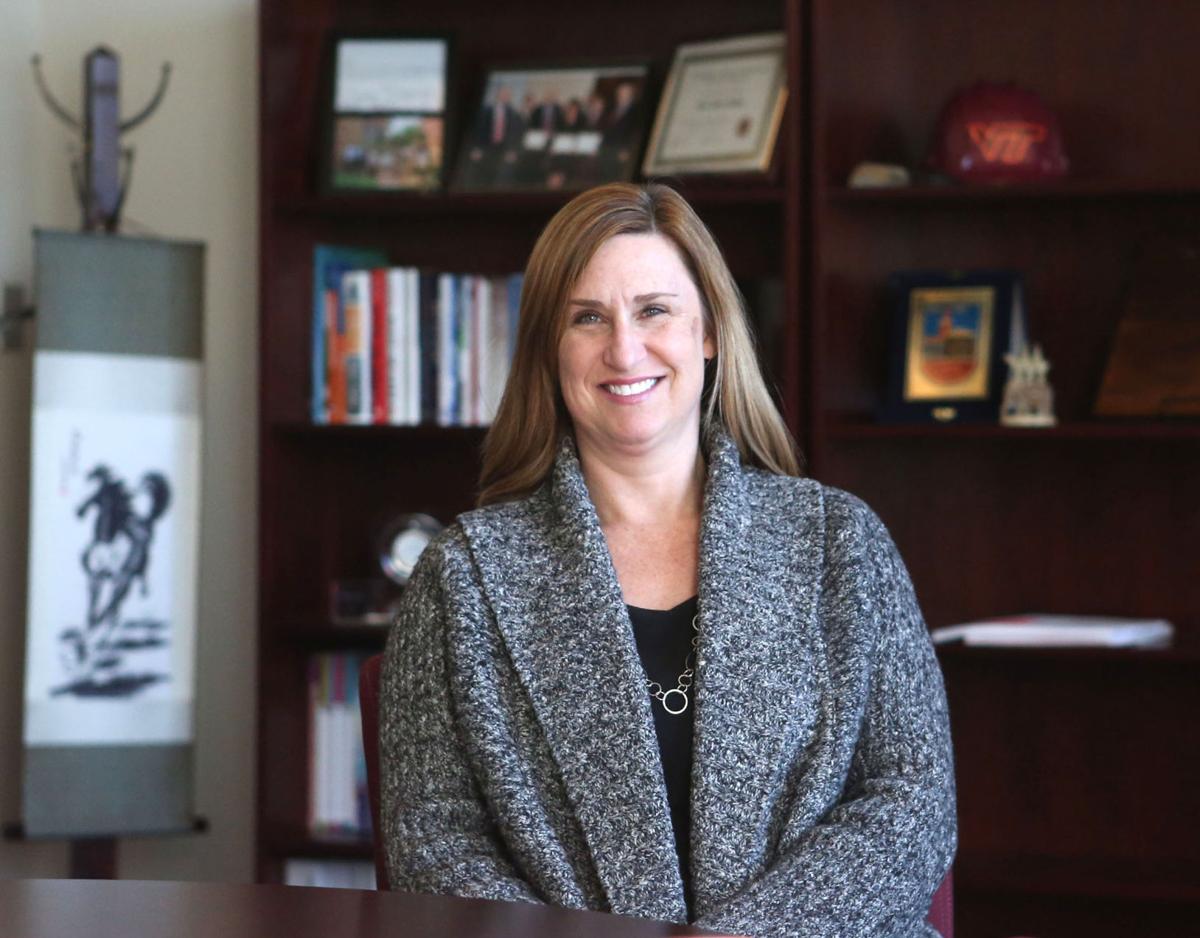 Julia Ross started as Virginia Tech’s new dean of engineering in July. She is the first woman to hold that position.

And now, she finds herself settling into the familiar role of the first woman to serve as dean of Tech’s College of Engineering.

“It used to make me a little bit uncomfortable, but I’ve sort of gotten used to it,” Ross said. “You feel a bit of extra responsibility to not screw it up.”

Ross, who started at Tech in July, comes in at a time of heightened attention on gender and racial disparities throughout the technology field. From robot clubs in elementary schools, to major corporations like Microsoft, women, blacks and other underrepresented minorities are outnumbered — and often losing ground.

That means underrepresented groups are missing out on the diverse perspectives that are required to solve modern technology problems, Ross said.

The first incoming class of engineering freshmen she will lead, for instance, is 2.7 percent black. That’s down from 3.1 percent last year, according to data from Tech’s Office of Institutional Research and Effectiveness.

The group is 22.3 percent female, down from 25.3 percent in fall 2016 despite concerted efforts to attract and retain more women.

Tech has been talking about the problem for nearly a decade. It joined the National Center for Women and Information Technology’s Pacesetters program in 2009 and pledged to show others how to close the gap, particularly in the computer science department where 45.5 percent of students are still white men.

But the numbers haven’t shifted dramatically since then.

“I don’t fault Virginia Tech for this, because I think most places aren’t there,” Ross said. “It’s not part of the everyday fabric and everyday things people are thinking about. But I think if we’re going to make the big shifts ... we’re going to have to think about it and talk about it differently.”

Ross said she plans to institute changes that pervade the College of Engineering, some subtle and others more overt. It can’t be the job of one person or institute, but rather something intertwined with everything the college does.

Since she’s only been in the job for two months, Ross said, she’s still learning about the college’s recruiting and admissions policies. She likes initiatives like the Clark Scholars, a new scholarship program that will aim in part to boost opportunities for underrepresented minorities.

Ross stopped short of saying her own gender will help, but she says her experiences coming up as a woman in the engineering profession have informed the way she addresses diversity gaps.

Ross grew up near Purdue University with a mother who studied mathematics in college. She said it never felt unnatural to be a girl who was good with numbers, and engineering seemed like a natural career path.

During her undergraduate years in Purdue’s engineering department, Ross said, she experienced a lack of support that’s common in competitive engineering schools.

“Nobody was actively saying you don’t belong here,” Ross said. “But if I had just not showed up for class one day and quietly changed my major, I’m not sure anybody would have noticed and nobody would have cared.”

At Tech, Ross said she wants to rid the college of any notions that certain courses are designed to push out students who can’t make the cut. She said she doesn’t want to see expectations drop, but rather courses and a culture designed to help every student who’s smart enough to get into the college to stay in the college.

“When you have that kind of weed-out, exclusive kind of attitude, you sometimes weed out and exclude people who are very capable,” Ross said. “And that’s a shame.”

She said she remembers that when she was an undergraduate, her classmates patted themselves on the back for being part of the group that was strong enough to make it through the program.

“That was almost a point of pride that a lot of people didn’t make it through,” Ross said. “I think we have to change that conversation. And that’s not quick and that’s not easy.”

Ross said she’s also seen how important a diverse teaching staff can be. During her time at UMBC, she said, she saw the chemical engineering department grow from the time she was the only female faculty member until it was an even split between male and female.

She said she remembers teaching a fluid mechanics class to a group of third-year students at UMBC after the numbers improved there. One of her female students asked if there were any men in chemical engineering, since to that point she hadn’t had a single male professor.

“It just struck me as the funniest question I had ever heard,” Ross said. “That was a very different experience those students were having than I had.”

At Tech, Ross said faculty diversity is something she simply cannot ignore.

Ross said the college is going to have to face the problem head on, taking a look in the mirror and figuring out what’s working and what’s not.

“It’s hard and it’s frustrating. There’s no magic. There’s no secret sauce. It’s hard and you have to pay attention to it,” she said. “I am eternally optimistic that we can do better. But realistic enough to know it’s going to take hard work and sustained effort.”

Virginia Tech College of Engineering Dean Julia Ross listens as Benjamin Knapp, director of the Institute for Creativity, Arts and Technology and a professor of computer science, shows her a studio in the Moss Arts Center that is engineered for sound.

Julia Ross walks through Torgersen Hall on her way to an appointment Monday.

Julia Ross started as Virginia Tech’s new dean of engineering in July. She is the first woman to hold that position. 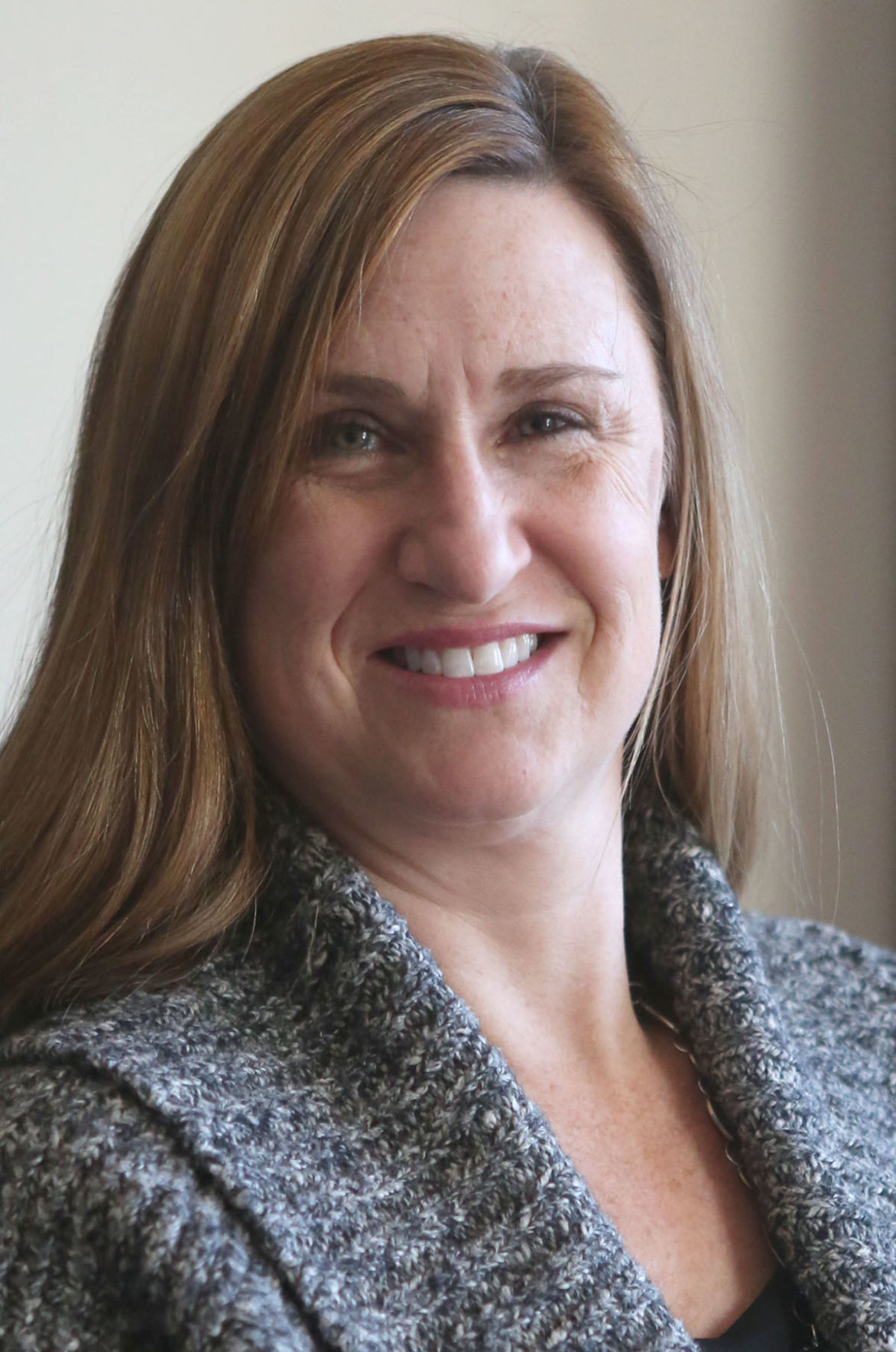