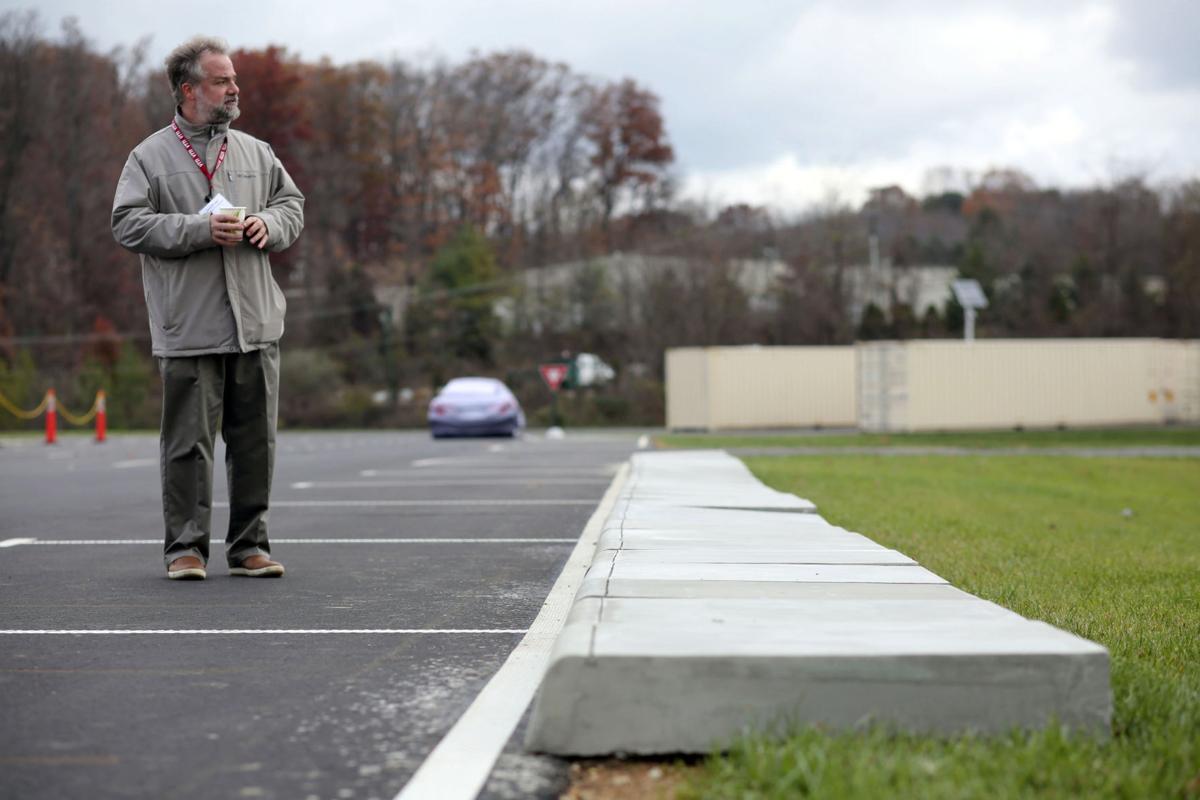 Smart Road technology developer Jared Bryson looks over a portion of a new urban test track earlier this month that includes a sidewalk and parallel parking area for research purposes. The Virginia Tech Transportation Institute is opening an expansion of the facility as it continues to work with private companies on the future of autonomous vehicles. 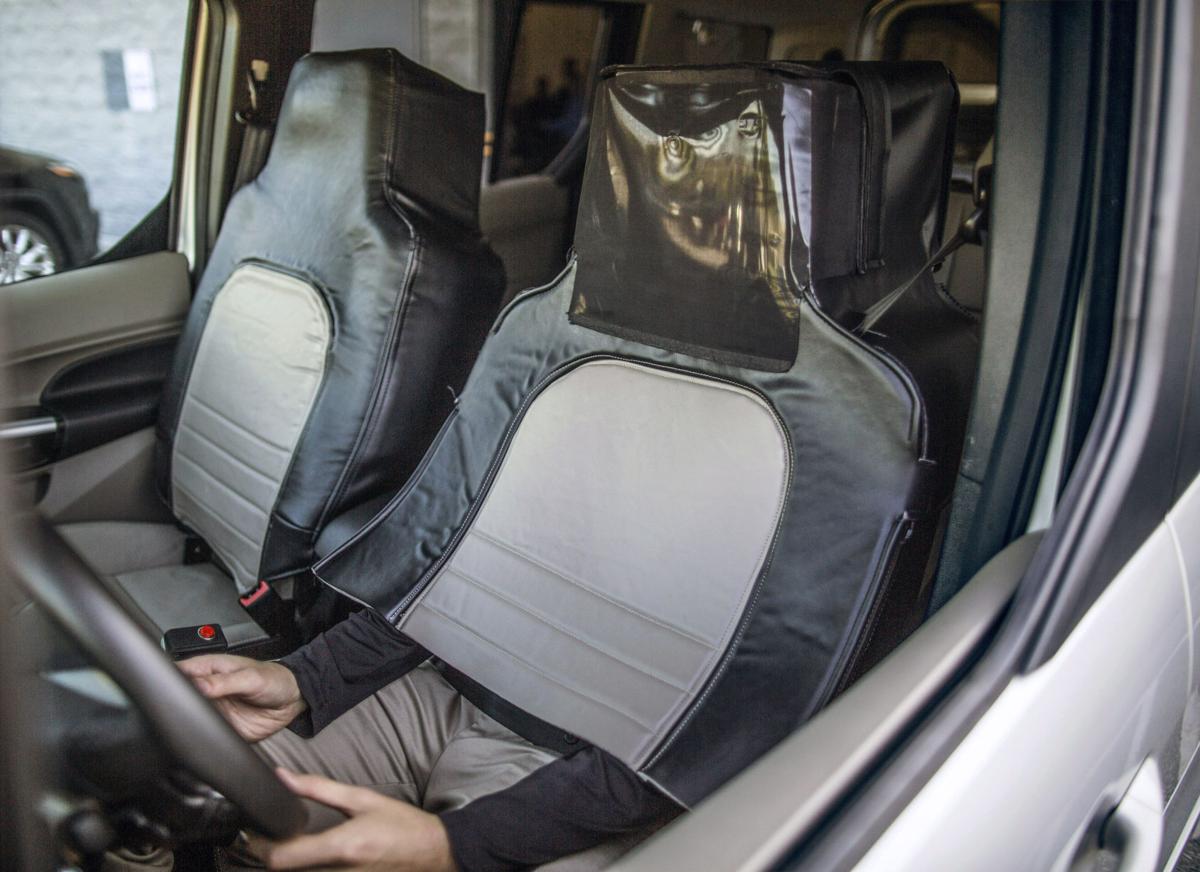 The Virginia Tech Transportation Institute and Ford Motor Company teamed up to build a van that disguised the driver as a seat so it appeared to drive itself.

BLACKSBURG — If cars of the future drive themselves, will they need headlights anymore? How about windows, steering wheels or turn signals? Will seats still need to face forward, or can we redesign interiors to look more like a living room than a stuffy car?

These are the often ideological questions a team of researchers, led by the Virginia Tech Transportation Institute, will spend the next three years answering.

Autonomous vehicles fundamentally change the driving dynamic, so they’re going to require a new set of federal standards for manufacturers. Instead of waiting to see what happens, the U.S. Department of Transportation has assembled a group of experts to begin sorting through the hypotheticals now.

Myra Blanco, the head of VTTI’s Center for Policy and Outreach, was selected to head up the $8.7 million project.

She said her team will partner with General Motors, Nissan and more than 20 other research and industry entities to go through every Federal Motor Vehicle Safety Standard with an eye toward the apparent inevitable autonomous future.

For decades, these safety standards have governed everything from rearview mirror placement to tire pressure gauges. The idea has been to establish rules across the automotive industry, so key safety features are predictable no matter what vehicle people are in.

The problem is that the rules were all designed around one key automotive component that technology is phasing out: the driver.

Consider dashboard warning lights, for instance. The person in the driver’s seat has always been considered the leader of the vehicle. If a back door is left cracked open, the car warns the driver, and it’s that person’s responsibility to fix the issue.

But Blanco asks what happens when there’s no driver’s seat and everyone in a vehicle is just an occupant with equal responsibilities. Who should deal with the vehicle’s notification of the open door?

The group will present its findings to the National Highway Traffic Safety Administration as a series of suggestions. Some will be recommendations for entirely new standards that will arise when robots become our chauffeurs; others will be an adaptation of what already exists.

VTTI’s group won’t have final say on the matter, as federal regulators will be tasked with deciding whether and how the recommendations are implemented.

Blanco’s team isn’t taking anything for granted. Even talking about devices that need to be mounted onto the front of a car, Blanco clarified that she was referring to “what we recognize now as forward.”

“In the future the vehicles may be bidirectional,” she added. “They can potentially move in both directions, in which case front and back are not relevant either.”

Asked if that means headlights would have to be mounted on both the front and rear, Blanco said even that launches a whole new line of questions.

“Does the vehicle really need headlights?” she asked, although she already knew the answer. “The purpose of the headlamps is for the human to be able to see.”

Another one of Blanco’s favorite hypotheticals involves futuristic taxis.

Right now, a cab driver is able to talk to customers to let them know whether or not the vehicle is already reserved and to make sure the correct person gets in the correct vehicle.

But what would happen if a self-driving taxi approaches a pickup spot to find an unaccompanied minor who’s too young to ride alone? Will robots be able to ask where the child’s parents are?

“So all that external communication somehow needs to happen,” Blanco said. “Those are all future topics, but things that are going to be very interesting — and challenging.”

Blanco said the project began last month and is still in the early phases. The group has discovered more questions than answers at this point, but it has until 2020 to sort through it all.

“Things might be changing in the near future,” Blanco said. “We still want the intent of the standard to be the same, the performance requirements to be the same. But how can we translate those to ensure the vehicles in the future can comply and be safe?”

Smart Road technology developer Jared Bryson looks over a portion of a new urban test track earlier this month that includes a sidewalk and parallel parking area for research purposes. The Virginia Tech Transportation Institute is opening an expansion of the facility as it continues to work with private companies on the future of autonomous vehicles.

The Virginia Tech Transportation Institute and Ford Motor Company teamed up to build a van that disguised the driver as a seat so it appeared to drive itself.