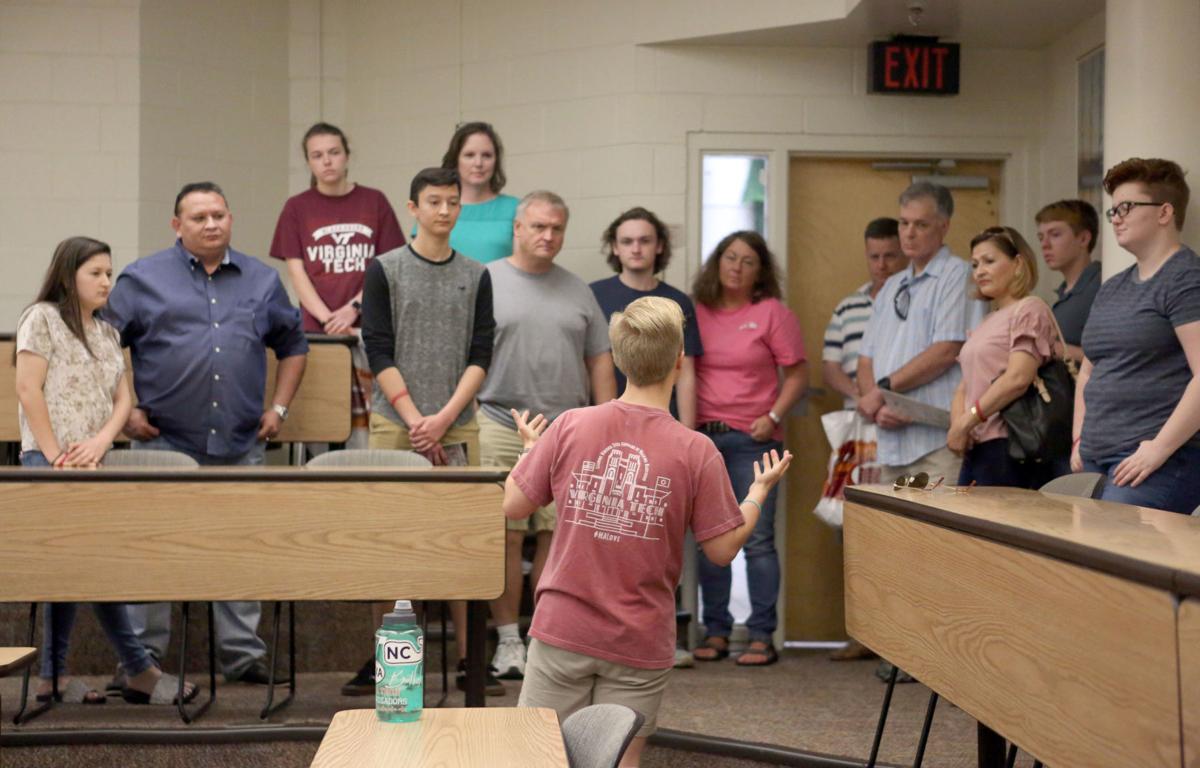 Hokie Ambassador Zachary Kemp talks with prospective students and their families while touring a Pamplin Hall classroom on Thursday. Admissions counselors will take a more careful look at a student’s background in the new admissions process, designed to attract more students from diverse backgrounds, especially first-generation students and those from low-income families. 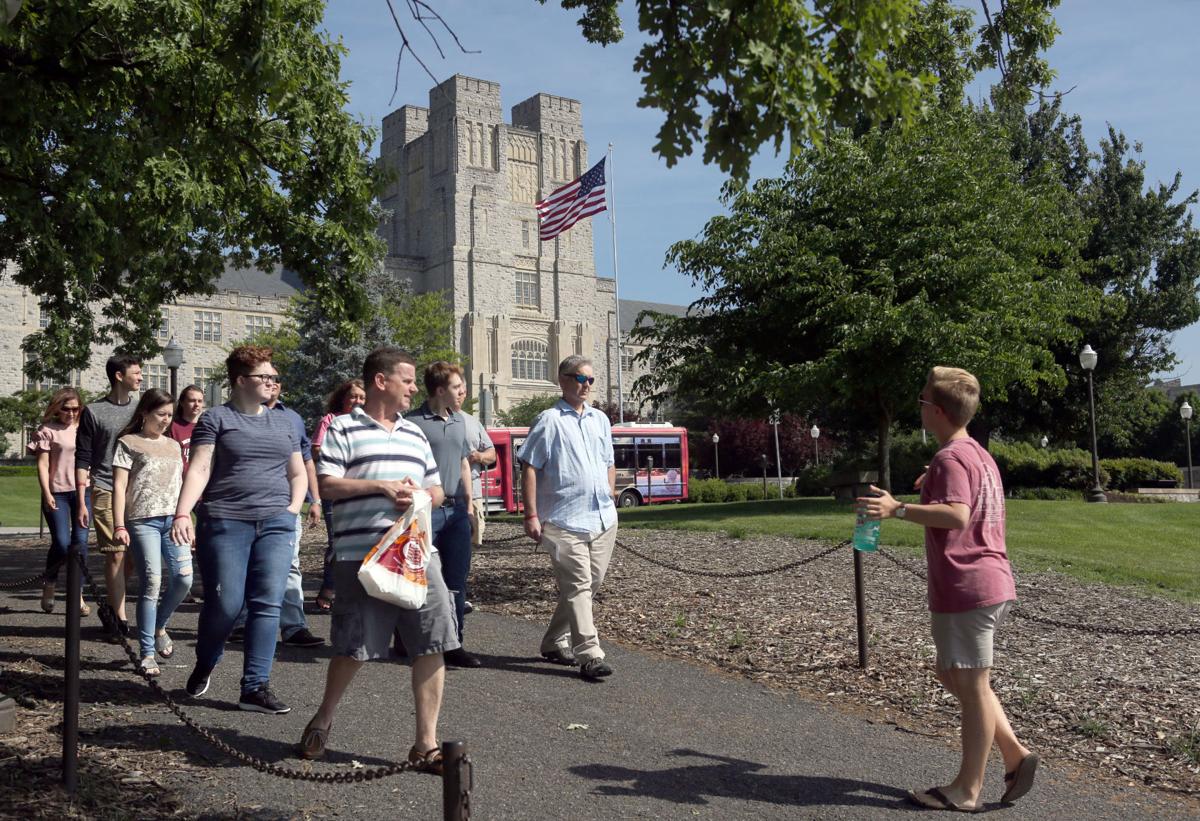 Hokie Ambassador Zachary Kemp (right) leads prospective students and their families on a campus tour on Thursday. Virginia Tech has changed the way students can apply to the school this fall by using a uniform application created by the independent Coalition for Access, Affordability, and Success. 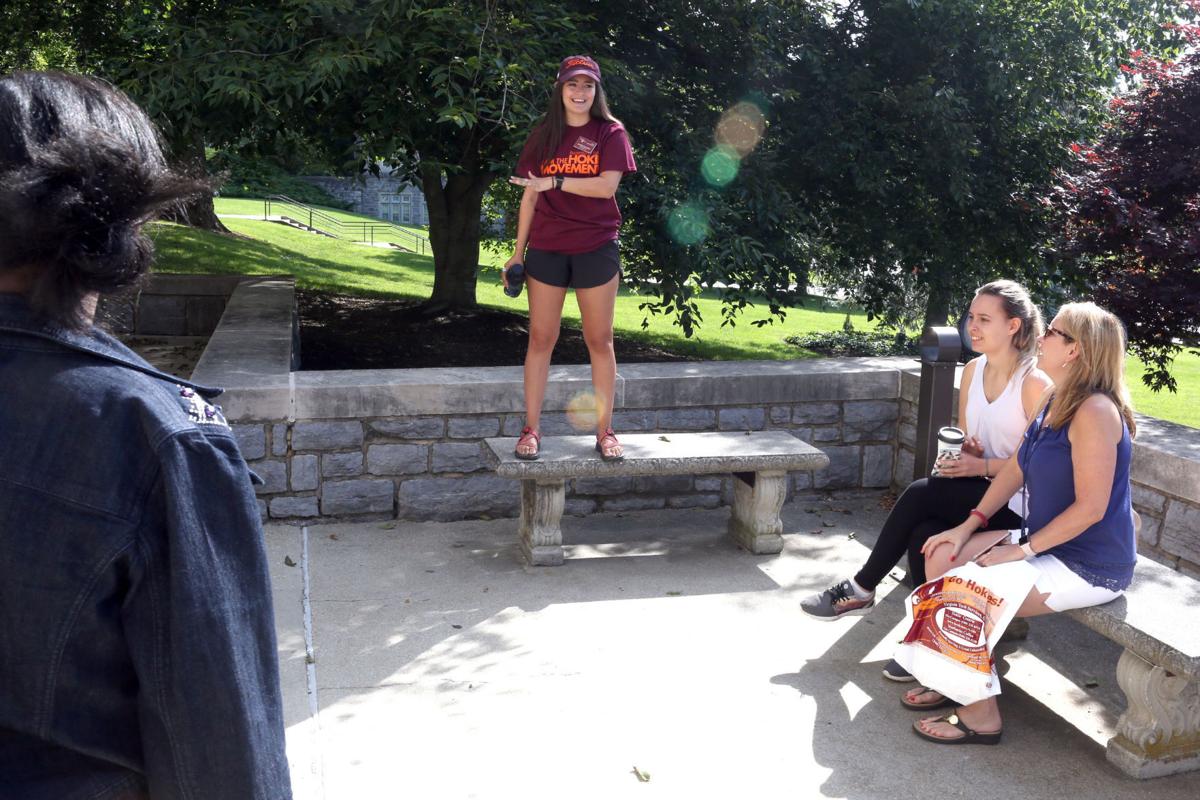 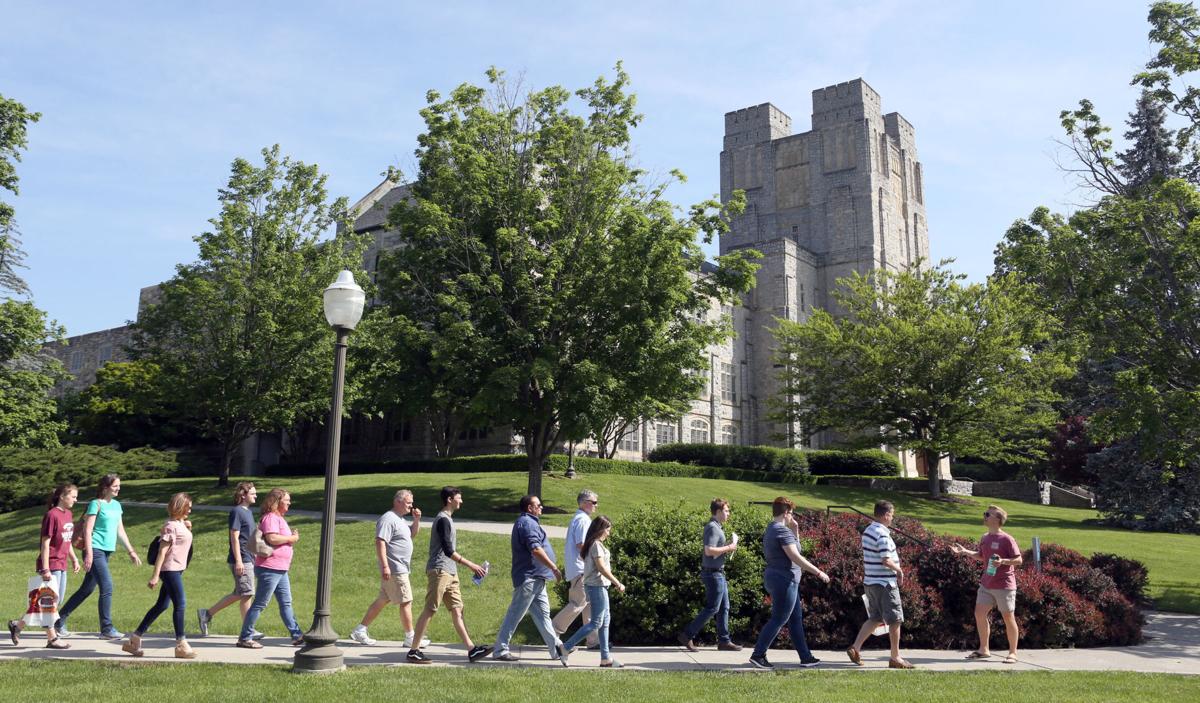 BLACKSBURG — Applying to Virginia Tech will look different for students trying to get into the school this fall.

Admissions counselors will also take a wider view of an applicant’s experiences and give more weight to what’s outlined in their essays.

And even though getting into Tech will remain challenging, as the school will keep up its standards for admittance, taking into account an applicant’s life situation will be more important than ever.

“We’re looking for more ways to say ‘yes,’ instead of saying ‘no,’ ” Espinoza said.

That’s the goal of the nationwide group of colleges who are working on ways to get more students who might otherwise struggle to afford college onto campuses across the country.

Virginia private colleges including Sweet Briar College and the University of Richmond also accept the application.

A new application in a new time frame

The coalition application is designed to help lower-income and first generation students apply to college by improving ease and accessibility to financial aid.

The coalition’s website also provides resources and a space to save documents that can be used on a college application.

Originated by a small group of colleges, the coalition’s application is turning into a nationwide movement that’s now used by more than 140 member schools.

Students will apply through that application and then fill out a unique set of four essay questions for Tech, Espinoza said.

Tech’s portion of the application is still being finalized, but Tech will be looking for students who have a positive self-concept, are working toward self-development academically, and possess a commitment to improving society.

The coalition application, accessible through the organization and through Tech’s website, will be the only way to apply to the school.

The application should attract more students from diverse backgrounds by breaking down barriers that might prevent a student from applying, Espinoza said.

There will also be a new application timeline for students with the introduction of what’s called early action. Under that system, students can apply early to get a non-binding decision that’s due by Dec. 1.

There’s also a separate early decision program with applications due by Nov. 1. That requires students to accept an offer and make a deposit.

A regular decision application is due Jan. 15.

Espinoza said he believes most students will apply before the early action deadline to have a better idea of where they stand as they apply to multiple colleges.

Looking at the whole student, helping with fees

Reviewers will put extra effort into examining the context of a student’s situation — taking special note of the narrative given in their essay.

Tech admissions officers have always looked beyond raw numbers like GPA and SAT scores toward markers such as course rigor and extracurricular activities, Espinoza said. But life experience will take on a new importance.

Did the potential student work a job to provide for themselves and still maintain decent grades in high school? That question could be an indicator of success.

Tech already has a freshman retention rate — a measure of first-year students making it into their second year — of more than 90 percent annually.

Making sure that number stays high is a priority for the school’s administrators, Espinoza said.

A hard-working student that can be paired with a financial aid package that’s available for renewal will be key to keeping up retention, he said.

The coalition’s application process also makes it easier for students to get a fee waiver from Tech.

The application will automatically waive all fees for students who receive a free or reduced school lunch , qualify for fee waivers from standardized tests such as the SAT or ACT, or participate in a TRIO aid program for disadvantaged students.

Military veterans applying to Tech will also have their application fees waived.

The waivers are an important difference from Tech’s previous application system, according to Espinoza. He said that under the previous system, potential students would need to acquire a code from Tech or their high school counselors.

The place to enter that code was located in the middle of the application and difficult to identify.

Espinoza said he assumes some students who were eligible for fee waivers either ended up paying the fees or giving up on the application process for Tech.

Potential students will also be able to self-report their transcripts and standardized test scores in an effort to prevent delays in processing and sending transcripts from high schools to Tech, Espinoza said.

Tech will eventually request transcripts and test scores after a student decides to attend the institution, to verify grades.

Espinoza said this practice is already used at other universities and, because of the grade verification process, it’s rare — and foolish — for potential students to lie about their grades.

Cutting costs for students, especially from low income families , is about opening doors rather than giving handouts, according to Luisa Havens Gerardo, vice provost for enrollment management.

“This is not about giving anybody a break,” Havens Gerardo said.

She hopes to expose the school to students who might not have otherwise applied.

As Tech makes these changes to the application process, the school is also intensifying recruitment at high schools and middle schools in an effort to increase exposure to more students who are under-represented on the Blacksburg campus.

All these changes are in step with Tech President Tim Sands’ previously stated goals to increase the student body’s diversity.

Sands has said he wants 40 percent of the student body to be made up of underrepresented students, under-served first-generation or low-income students by 2022.

In the incoming freshman class, 34 percent of the students fit those categories, an increase of 3 percent from the class that entered a year ago.

Those goals make sense for where the demographics of the country and commonwealth are headed, Havens Gerardo said. Competition for attracting students is fierce and Tech will need to have more minority and first-generation students if it wants to thrive, she said.

Tech’s size and influence will diminish if it doesn’t attract populations that it hasn’t served well in the past, Havens Gerardo said.

“In the next 20 years the institutions that figure out how to serve the people and demographics in our country are the ones that will still be standing,” she said.

A university receptive to ‘the dream student’

A Tech education is — and will likely continue to be — in relatively high demand.

Tech received about 32,000 applications — a record number — for the class arriving in the fall of 2018, despite annual tuition increases for the past 18 years.

Espinoza said he expects even more applications for fall 2019 students because of the changes.

Of those who applied in 2018, a little more than 60 percent were accepted, according to Havens Gerardo.

It’s unknown exactly how many will end up at Tech, but Havens Gerardo said not to expect another record freshman class such as the one that tested the campus’s capacity last fall.

But interest in the school remains a positive attribute for Tech officials trying to shape its future, Sands has said.

“Soaring interest in Virginia Tech for both in-state and out-of-state students reflects the value of the degree and the 21st century student experience that we offer,” Sands said at March’s university Board of Visitors meeting.

The main drawback , Sands said, is that the school has had to wait-list or deny qualified applicants who “could be successful at Virginia Tech.”

Tech officials believe those trends will continue with the new application process. Admissions counselors are already bracing for another record year of applications, Havens Gerardo said.

But regardless of the application or people who want into the school, Tech officials remain confident that the students who decide to attend will continue to be high achievers.

Getting in, though more attainable for some than others, will continue to be a major accomplishment, she said.

The coalition application includes lots of the boiler plate information every college or university requires to be admitted: items like their name or where they live. The application also includes essay prompts like these:

What does Virginia Tech look for in potential students

According to Virginia Tech interim director for admissions Juan Espinoza, the school will ask students questions that will  show skills in the following areas:

Hokie Ambassador Zachary Kemp talks with prospective students and their families while touring a Pamplin Hall classroom on Thursday. Admissions counselors will take a more careful look at a student’s background in the new admissions process, designed to attract more students from diverse backgrounds, especially first-generation students and those from low-income families.

Hokie Ambassador Zachary Kemp (right) leads prospective students and their families on a campus tour on Thursday. Virginia Tech has changed the way students can apply to the school this fall by using a uniform application created by the independent Coalition for Access, Affordability, and Success. 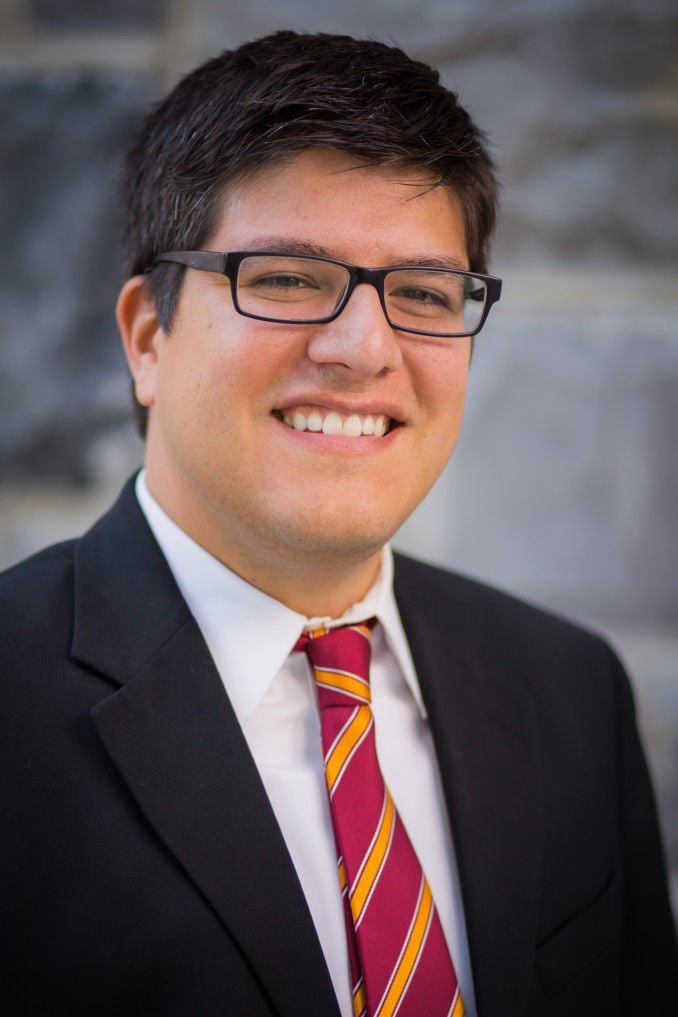