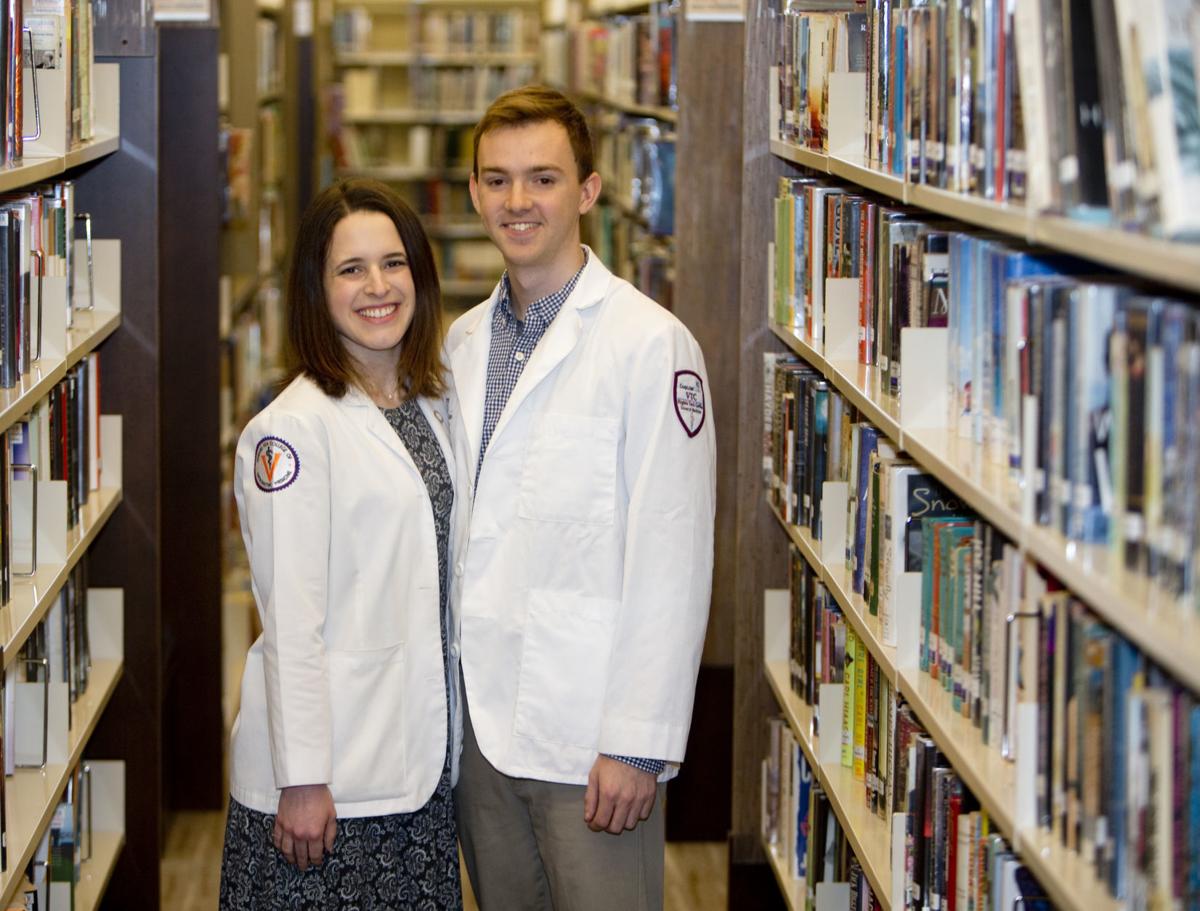 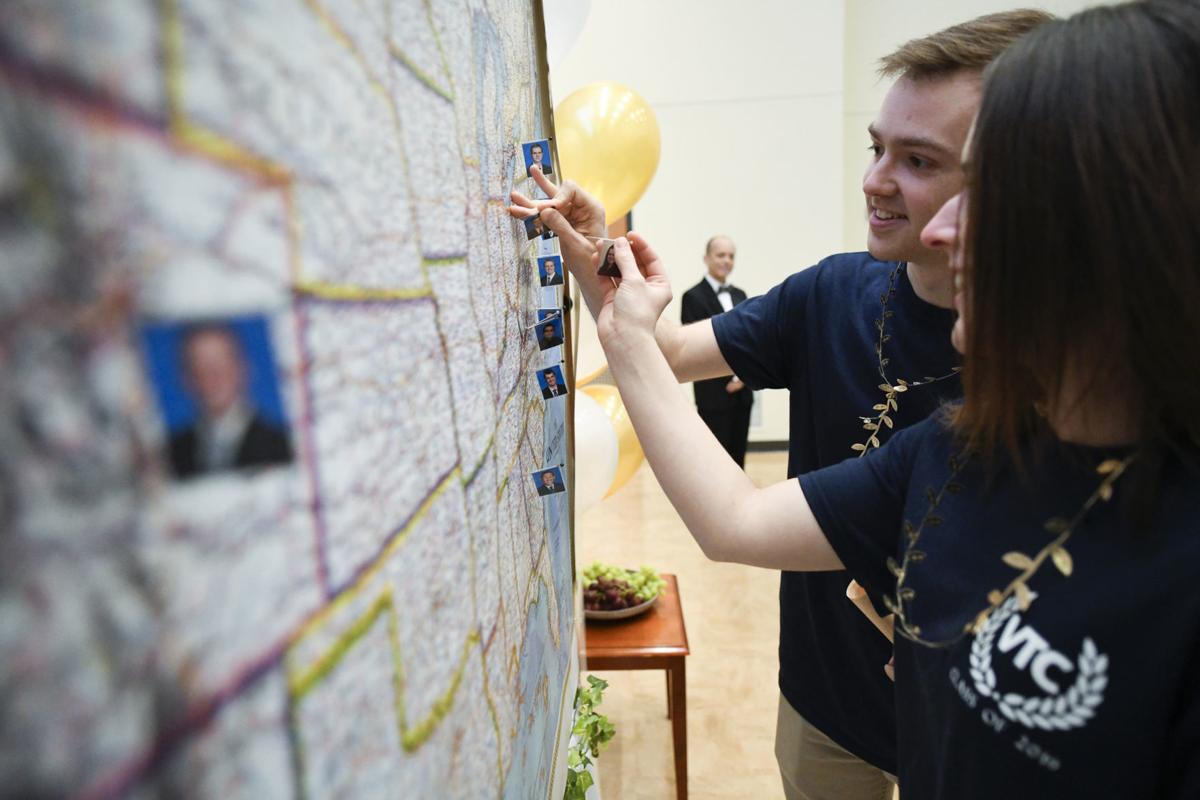 Marcie Costello and Steven Crane matched together, he at Akron General Medical Center for emergency medicine, she at Akron Children’s Hospital for pediatrics.

But as their fourth year drew toward an end and graduation neared, the couple’s future hinged on making their career matches.

Match Day is as important a day as graduation for medical school students. Each year, on a Friday in mid-March, the National Resident Matching Program informs seniors who matched with a residency where they will be heading next. Without this next step in medical education, even with an MD or DO, they cannot become licensed to practice medicine.

This year, 38,376 students applied for 35,185 positions. Among them were about a thousand couples like Crane and Costello who wanted to match together.

Crane, who attends Virginia Tech Carilion School of Medicine in Roanoke, and Costello, a student at Edward Via College of Osteopathic Medicine in Blacksburg, spent much of their senior year executing a strategy that would provide the best chance to be offered residencies in the specialty each wanted, and in a place they both wanted.

“With the match in general, you apply to all these places and they invite you for interviews, if they want,” Crane said. “Then we go to make our rank list. We rank the programs in order of where we would prefer to go, and they essentially do the same thing for everyone they interview. So the computer algorithm does its thing and matches you up with a program.”

It’s a little more exciting and grueling than that, but in the end about 90% of seniors will match with one of their top three choices.

Crane parsed the data to find how many applications and interviews students should do to stand the best chance for a match.

“For most people, that looks like doing 12 to 15 interviews. Any more than that doesn’t help you,” he said.

But for couple matches, the data is less precise.

Crane and Costello asked couples who had matched together in prior years for suggestions. They combed through the numbers, but percentages offered little insight into the specialties and places that prior couples had sought.

“It’s a common strategy with people doing couples matching to do big cities because there are a lot of programs. Say I interviewed at three pediatrics in New York City and he at five emergency rooms, we’d have a better likelihood,” Costello said. “But we didn’t do that. We’re not big-city people.”

Crane grew up in Fairfax and studied biochemistry at Virginia Tech. He worked for a year doing research for the National Institutes of Health before entering VTC.

“It was nice to do for one year because then I knew medicine was the right path for me,” he said.

Costello grew up in Knoxville, Tennessee, and moved to Cincinnati, where she majored in biology and Spanish at Xavier University. She spent a gap year doing clinical research in the emergency department of the University of Cincinnati before enrolling at VCOM.

Their paths crossed during their third year when both were doing clinical rotations at Roanoke Memorial.

They were on separate rotations but bumped into each other and started talking. Their first date was a mystery night at South County Library.

Many of their dates since then have been in hospital cafeterias. And much of the last year has involved executing a strategy for a life together that required them first to spend more time apart.

With their families on this side of the country, they decided they didn’t want to venture too far west. Kansas City was the limit. They crossed out big cities, yet they wanted to be in an academic setting. She preferred Ohio; he, the Southeast. They eliminated places that had a strong program in one of their specialties but a weak one in the other.

Crane applied to 60 emergency medicine programs, Costello to 55 pediatric programs. Then the offers came in. The pediatric programs came first, and Costello accepted everything coming her way until his offers arrived the following week. Then they honed their strategy.

He interviewed at 19, she at 17. Rarely were they in the same place together. They met up once in an airport.

Then came time to rank their choices.

“The advice we had been given is we sort of tried to make our own rank list independently as if we’re going alone, and then compare them and try to come up with a consolidation,” Crane said. “It was tough because even though I was trying to make my own list, in the back of my mind I know which program she likes or doesn’t like.”

Ideally, they wanted to be in the same city, but some distance crept into one of their top 10 choices, with him in Charlottesville and her in Richmond because they liked the programs.

They maxed out the possibilities. “You get to this point where you’re making combinations where you aren’t even close to each other,” she said.

With couples matching, the partners can hedge and say one will accept a match even if the other does not find one.

“So if one of us can’t match, then none of us does,” Crane said a week before Match Day. “On Monday at 11 a.m., we are going to get an email that either says, ‘Congratulations. You matched,’ and it won’t tell us anything about where. Or it is going to say, ‘Sorry you did not match, and you will have to participate in the supplemental offer acceptance program.’ ”

That supplemental program is a last-week scramble, similar to a blind date. Programs with unfilled spots offer them to students who hadn’t interviewed. If it came to this, Costello would probably fare better than Crane, who was seeking a more competitive specialty. If they didn’t match, he might have to consider internal medicine or surgery. Even then, they’d only be given one year and have to apply again.

“I think we did so many interviews that the likelihood of us matching is very high. Just from the numbers and looking at past data,” Crane said. “But at the back of the mind you have to say yeah, a certain number of people don’t match. Last year, there were 1,165 couples and 1,082 both matched; 67 times one matched and the other didn’t. Sixteen times no one matched.”

The data doesn’t say which specialties, how many interviews, how many selections. “We’d have to be very unlucky not to match,” Costello said.

Both of their schools have excellent match rates, they tell each other.

And then came another wait. “We could end up in Toledo and New Orleans. Yes, we did match, but now we’re on opposite sides of the country,” he said.

Virginia Tech Carilion celebrates Match Day with a theme, decorations and costumes. This year, since it fell on March 15, students carried out the “Ides of Match” theme with “I came I saw I matched” t-shirts.

Students and their families were invited to a private ceremony, and at noon each student was handed an envelope containing his or her match.

VCOM does not have a similar ritual, so students have to wait until 1 p.m., when official notices go out.

Administrators at VTC and VCOM knew that Crane and Costello were matching together, so they shared information. VTC invited Costello to its ceremony, where she was handed an envelope.

They’ll be together, at their fourth-ranked choice.

They were ecstatic. During the public ceremony, their names were called together and they placed pins on Akron on a map of the U.S. that VTC displays to show where its students have gone.

All 37 members of the class matched. Among the places they are heading: Baylor, Brown, Duke, Emory, Johns Hopkins, Yale.

Nationally, 94% of the 18,925 seniors at allopathic schools, such at VTC, matched, with 77% landing in one of their top three choices, the National Resident Match Program reported.

For osteopathic schools like VCOM, 6,001 seniors entered the program and 84.6% matched. This is the last year that osteopathic students could have participated in a separate match program. There is now a single accreditation for graduate medical education programs, and starting next year all D.O. seniors will participate in the traditional M.D. match.

Crane will graduate Saturday as a member of the first class of VTC to graduate since the medical school became a college of Virginia Tech.

Afterward, they’ll pack up a U-Haul and move to Akron. Then they will return to Virginia for Costello’s May 24 graduation.

Then all those frequent-flier miles of traveling apart this year will pay off as they’ll use them for a trip to Australia before settling into their new jobs, and most likely, more dates in hospital cafeterias.

Edward Via College of Osteopathic Medicine

Marcie Costello and Steven Crane matched together, he at Akron General Medical Center for emergency medicine, she at Akron Children’s Hospital for pediatrics.