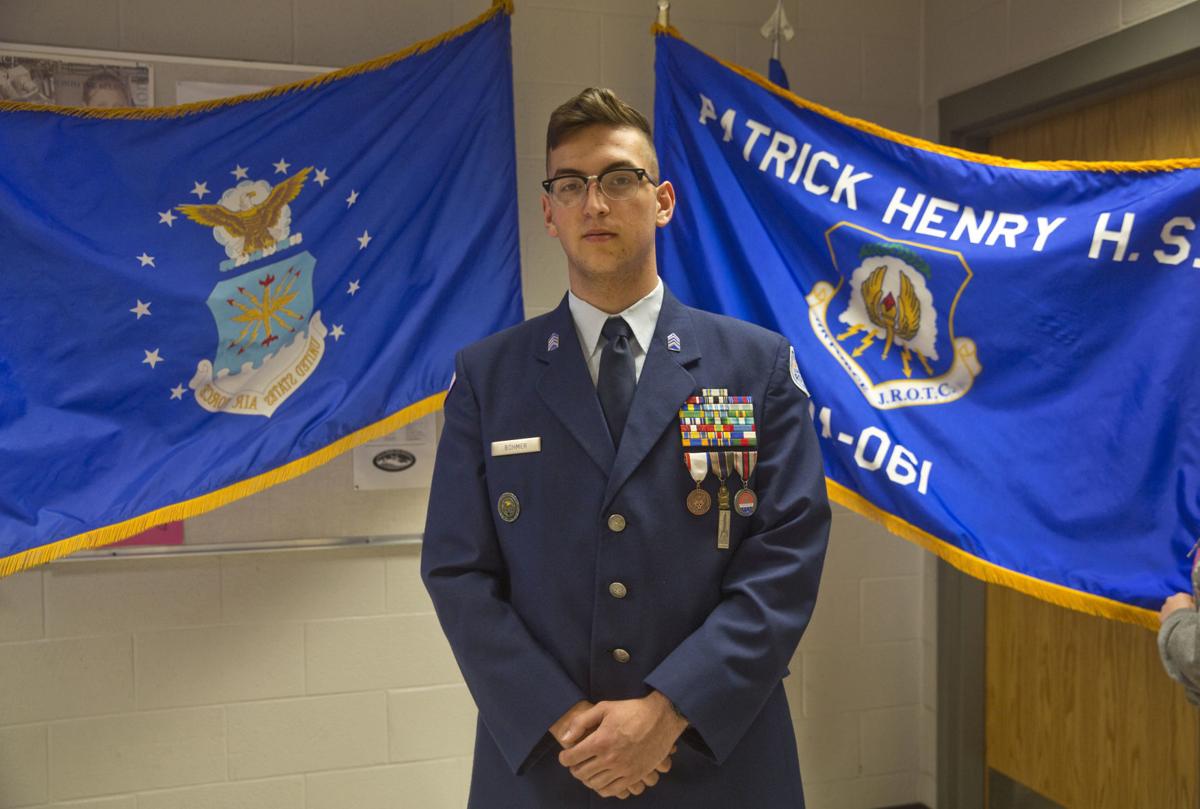 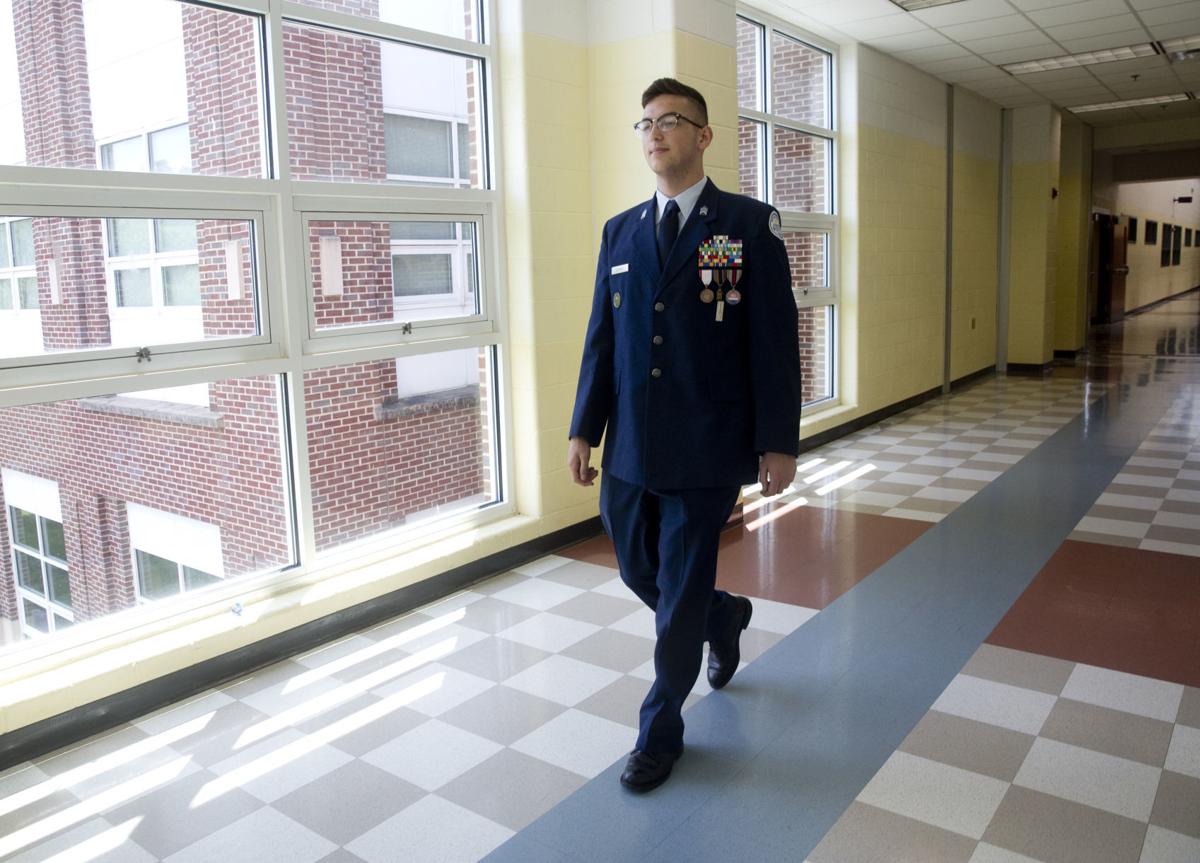 It took Patrick Henry High senior Christopher Bohmer, 19, several attempts to work up the nerve to tell an instructor he was interested in the Air Force JROTC program at school. But the program had a profound impact on his life and now he will be moving on to join the Corps Cadets at Virginia Tech this summer.

The old couch creaked beneath 12-year-old Christopher Bohmer as he tried to calm his growling stomach.

“If I moved, it would just make my stomach hurt even more,” he said.

He focused on the clock in the living room, hoping his hunger would subside.

Bohmer said he was living in a cramped Franklin County house with 10 family members at the time. Now 19, Bohmer recalled the moments of pain, and courage, on his path to academic success at Patrick Henry High School and entry to Virginia Tech.

On Wednesday, he’ll graduate from Patrick Henry with a GPA above 4.0, one of 798 graduates of Roanoke’s two high schools.

He’s also one of the many students in the city schools considered to be homeless under federal guidelines.

“Seventeen in 10 years,” Bohmer said. The figure represents the number of times he moved during one stretch of childhood. As a fifth-grader, Bohmer said, he attended four different elementary schools in two months.

He bounced from home to home across Southwest Virginia. Most often, those moves included his mother and little brother, although he sometimes lived with his two sisters who are half-siblings, Bohmer said.

“My mom made the best effort to ensure we had a place to lay our heads,” Bohmer said.

Sometimes, Bohmer said, that place was the house of a friend or family member, or the inside of a car. Not long after moving to an old farmhouse in Franklin County, Bohmer said, he realized his situation was only worsening, and he needed more structure.

“There were times when hoping wouldn’t get me far. I got knocked down constantly,” Bohmer said. “You have to put willpower behind it.”

Bohmer moved in with his father in Roanoke and enrolled at Patrick Henry High.

Because he was homeschooled through an online program from seventh- through ninth-grade, Bohmer said, some of his classes were not accredited. He needed to repeat his freshman year.

“Public school — the first year was really rough for me. But it helped in the long term. I had to keep the same mentality throughout: I need to keep the willpower. I need to stay strong,” he said.

Bohmer said he often becomes stressed among crowds, so he’d eat lunch in the library. One day, he saw a man there who stood out to him. He realized later that the man was Sgt. Terry Mills, co-leader of the Patrick Henry High Air Force JROTC program.

Bohmer said his brother, a year younger than him, was enrolled in JROTC in Franklin County at the time. “I thought, maybe [joining] this will give some form of connection with him,” Bohmer said.

The next day at lunch, Bohmer spotted Mills in the library again. “I went up to go talk to him. Right as I got to him, I ducked behind a bookshelf,” Bohmer said, through a laugh. “I did it again the next day.”

“I panicked, word vomited in a mellow voice; whispered practically that I was interested in joining ROTC. As soon as I said that, his face lit up,” Bohmer said.

Soon, Bohmer was spending time with fellow JROTC members, studying aeronautics, fitness and leadership. The program, along with Mills and instructor Lt. Col. Steven Boyd, had a profound effect on his life, helping him to break from his shell.

Boyd noticed how quiet Bohmer was during his freshman year, and assigned him the role of reciting the daily honors pledge to begin class.

Boyd, who has instructed the program for 16 years, said the mission is to develop citizens of character, and Bohmer represents a successful mission.

Bohmer worked hard, listened and became a leader himself through the program. He eventually served as the group commander.

Bohmer also worked his way up to become a shift manager at a Domino’s pizza as an 18 year old.

“The movie Aladdin makes a reference to a diamond in the rough,” Boyd said. “Students like him are why we do what we do.”

When Bohmer was 16, he left his dad’s house and moved in with his sister and her father. But he left again later, and now lives with a friend. Because of his housing situation, Bohmer is considered homeless by Roanoke City Public Schools.

The school system identified 731 students as homeless this year, as of May 31, schools spokesman Justin McLeod said.

In the face of a series of transitions, Bohmer continued to excel in his classes due in large part to an ability to “retain information like a sponge.”

This fall, Bohmer will begin classes at Virginia Tech and join the university’s Corps of Cadets. He plans to study psychology and neuroscience, and one day “help other people piece together their stories.”

It took Patrick Henry High senior Christopher Bohmer, 19, several attempts to work up the nerve to tell an instructor he was interested in the Air Force JROTC program at school. But the program had a profound impact on his life and now he will be moving on to join the Corps Cadets at Virginia Tech this summer.