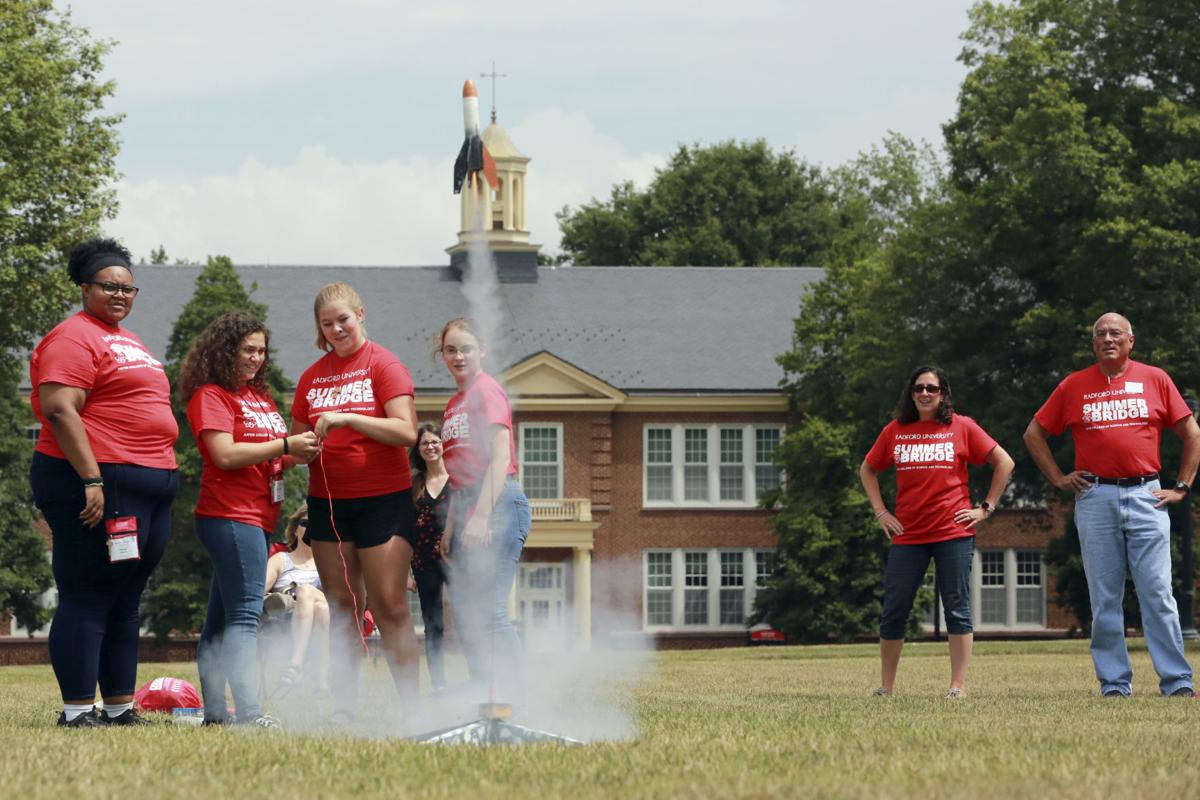 Summer Bridge campers launch a model rocket on the Radford University campus. The annual summer program encourages, empowers and inspires young women from across the United States to pursue degrees and careers in STEM (science, technology, engineering and mathematics) fields. 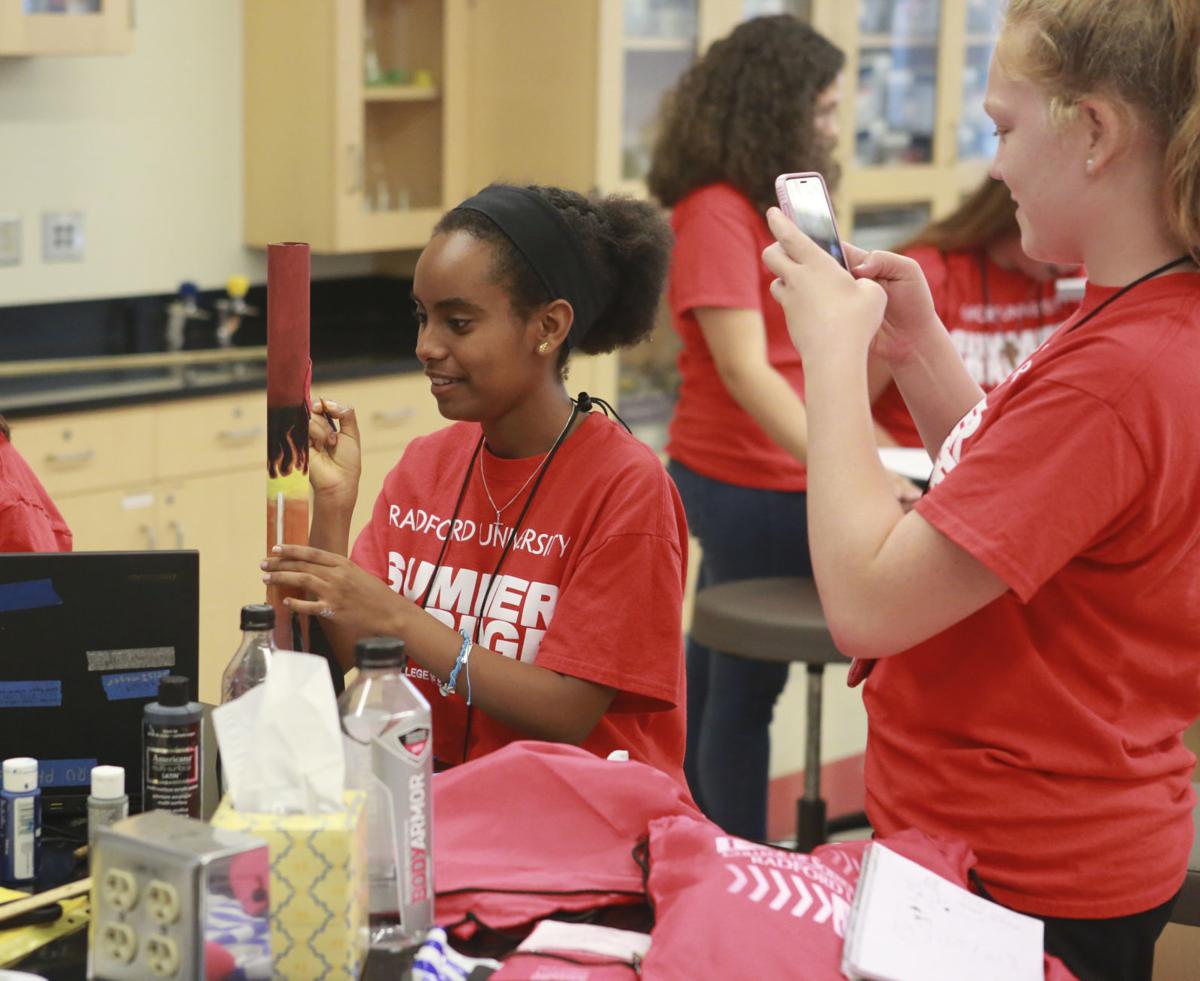 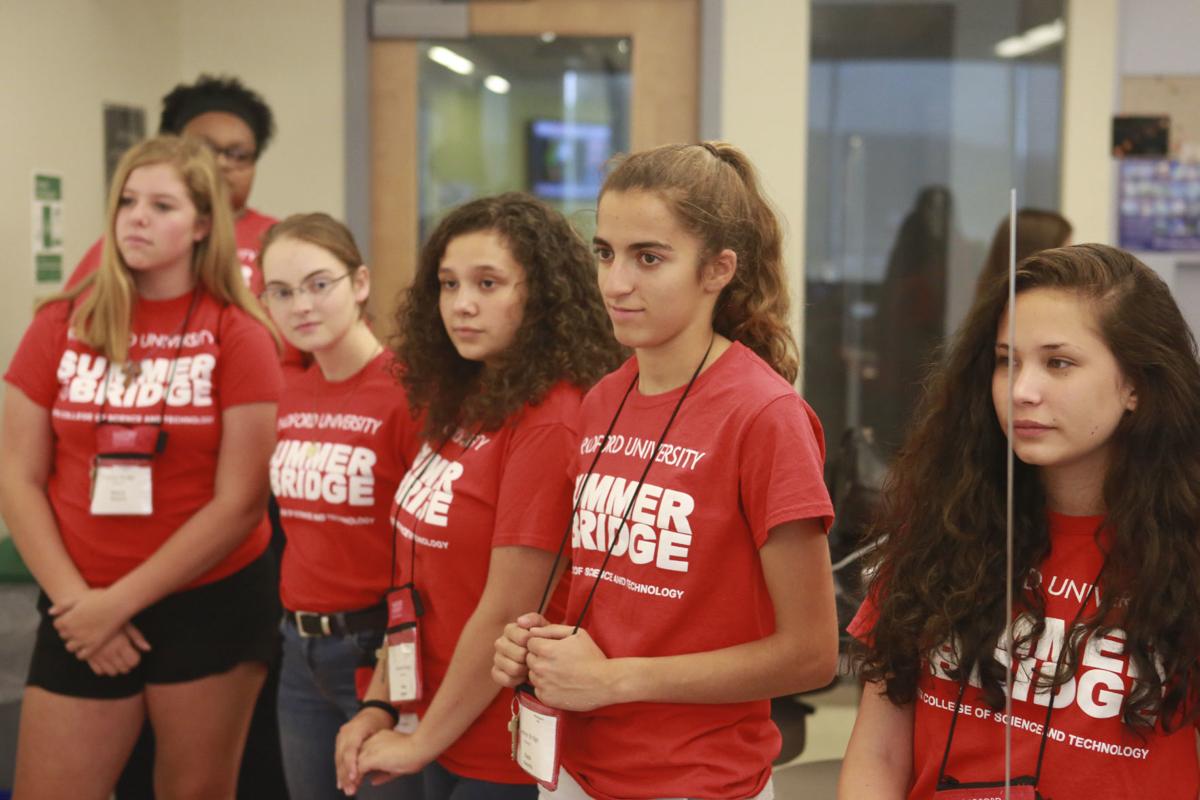 About 40 campers from around Virginia and beyond attended Radford University’s Summer Bridge program for female high school students. 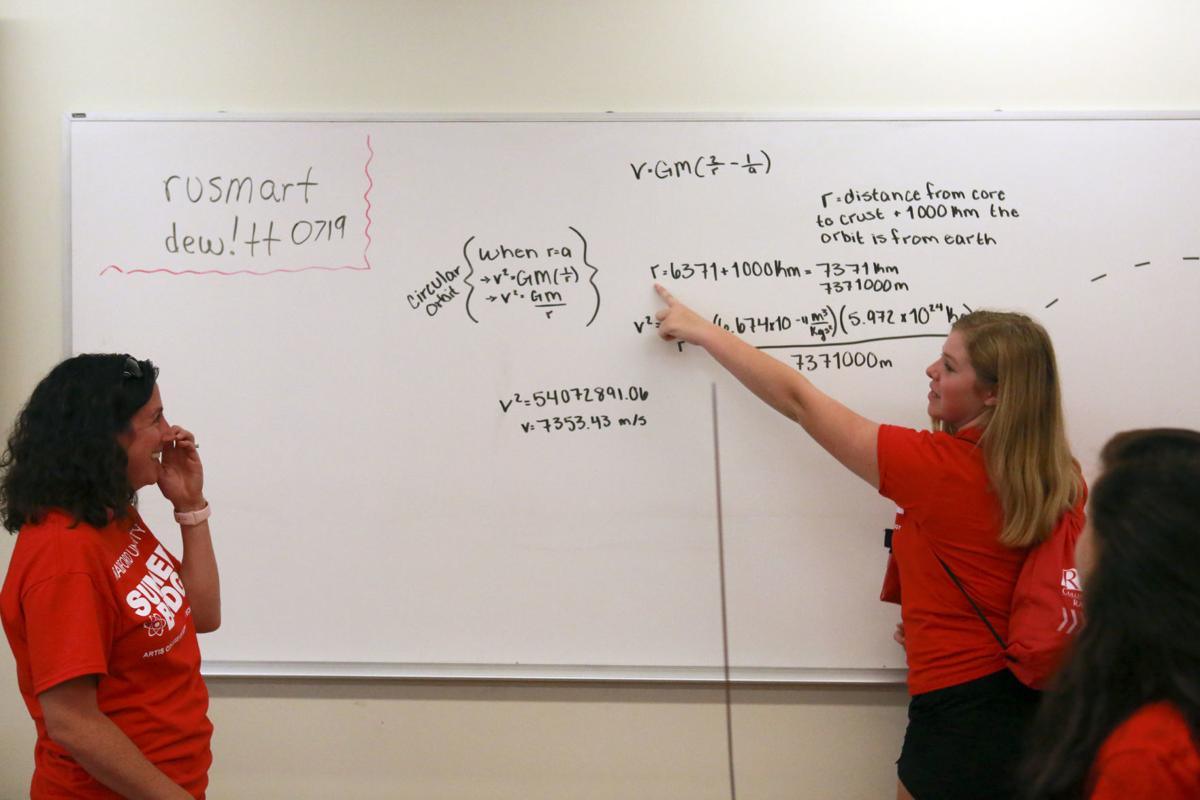 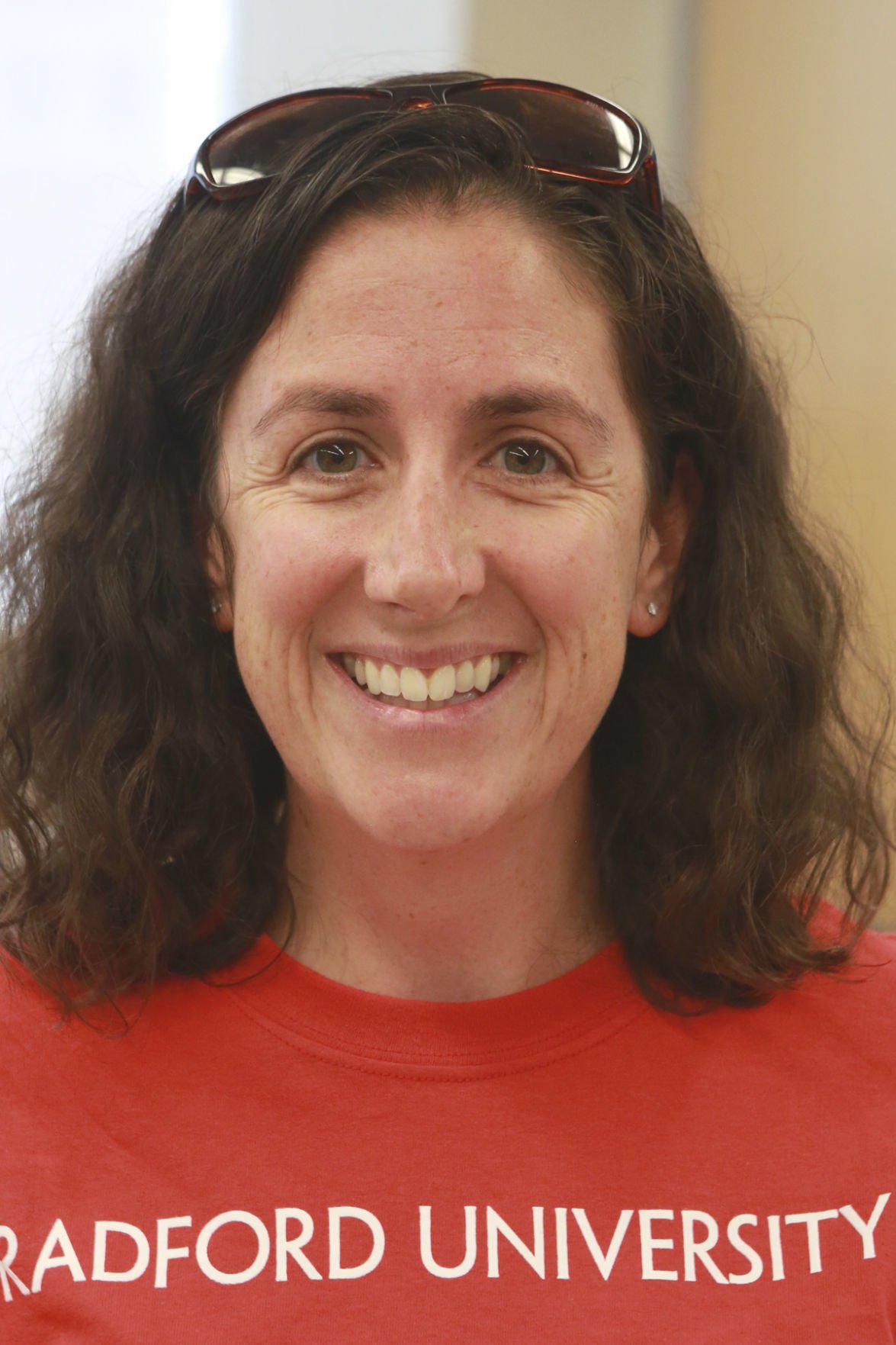 The camp included a variety of subjects for students to choose from such as physics and math, geology and forensic science.

Some students who weren’t too sure what they wanted to study for the week made the decision simpler by simply choosing which of their favorite subjects most closely aligned with each discipline.

Rising senior Maliyah Philpott of Bassett said that she chose “Bits and Bots,” which focused on building and launching rockets.

“I like math, especially when I understand what I’m doing,” Philpott said Thursday afternoon. “I really enjoyed working with the rockets as well, but I really loved the math portion.”

Of the approximately 40 students at the camp, 12 were involved in the building, programming and launching of the miniature rockets.

University math professor Brenda Hastings along with physics professor Rhett Herman led the group on its journey through the cosmos this week, with most students having little to no knowledge of rocket science before showing up to camp.

“We fit in at least two or three weeks’ worth of learning in the past five days. They all had a good understanding of algebra already, so it’s something we can definitely build from,” Hastings said.

Hastings said that oftentimes students don’t get to apply the math they learn to projects like building rockets and she appreciates the value of getting girls involved in STEM before college.

“It really is just a great way to show these girls that they can do this kind of stuff and that it really is a lot of fun. I love doing this camp and I think the kids really get a lot out of it,” she said.

The students also did other exercises like using math equations to fly a theoretical ship to Mars and back. Philpott said Thursday afternoon that the ship making it home by Friday was still an uncertainty.

“Our ship may end up floating in space forever,” she joked.

Besides learning more about possible career paths, attendees were excited to get a taste of the college life and meet new friends. Most of the students were from Virginia but some, like Bella Johnson of Atlanta, traveled a bit farther to attend the camp.

Johnson, 16, said she is interested in pursuing a career in a STEM field and had her heart set on attending Georgia Tech before coming to Radford.

“I really love the campus and the instructors here. Radford University is definitely at the top of my list after coming here this week. I could definitely see myself here in a few years,” she said.

City Mayor David Horton, who works at the university and is the camp director, said its importance cannot be overstated.

“Women are often underrepresented in STEM fields and that is something we are working towards changing. We need the best young minds working to solve problems going forward,” he said.

He said the camp is application- based and interested students must submit an essay, among other things, to be considered. He said the school would like to add more campers in the future, but more donations are needed as the camp is paid for through sponsors and scholarships for attendees.

Thursday afternoon was the culmination of the week’s work and the girls set out to the quad to launch their rockets. The students designed them, programmed the chips, built the launch pad and looked to collect data while in the area to determine just how far and fast the rockets went, according to Herman.

“They have put in a lot of work. It’s great to see what they’ve done in a week,” he said.

“Big Bertha,” the biggest rocket launched, didn’t meet the group’s expectation with its launch. The consensus was that the engine was too small compared to the weight of the rocket. “Little Bertha,” on the other hand, flew hundreds of feet in the air and ended up in between a nearby building where construction workers were happy to return the rocket in one piece to an excited group of students.

Johnson said that she was pleased with the week and didn’t know what she enjoyed more: rocket science or making new friends. Either way, she said she’d had an amazing week.

“I would love to come back. It was so much fun. And really, who doesn’t like building rockets?”

Summer Bridge campers launch a model rocket on the Radford University campus. The annual summer program encourages, empowers and inspires young women from across the United States to pursue degrees and careers in STEM (science, technology, engineering and mathematics) fields.

About 40 campers from around Virginia and beyond attended Radford University’s Summer Bridge program for female high school students.