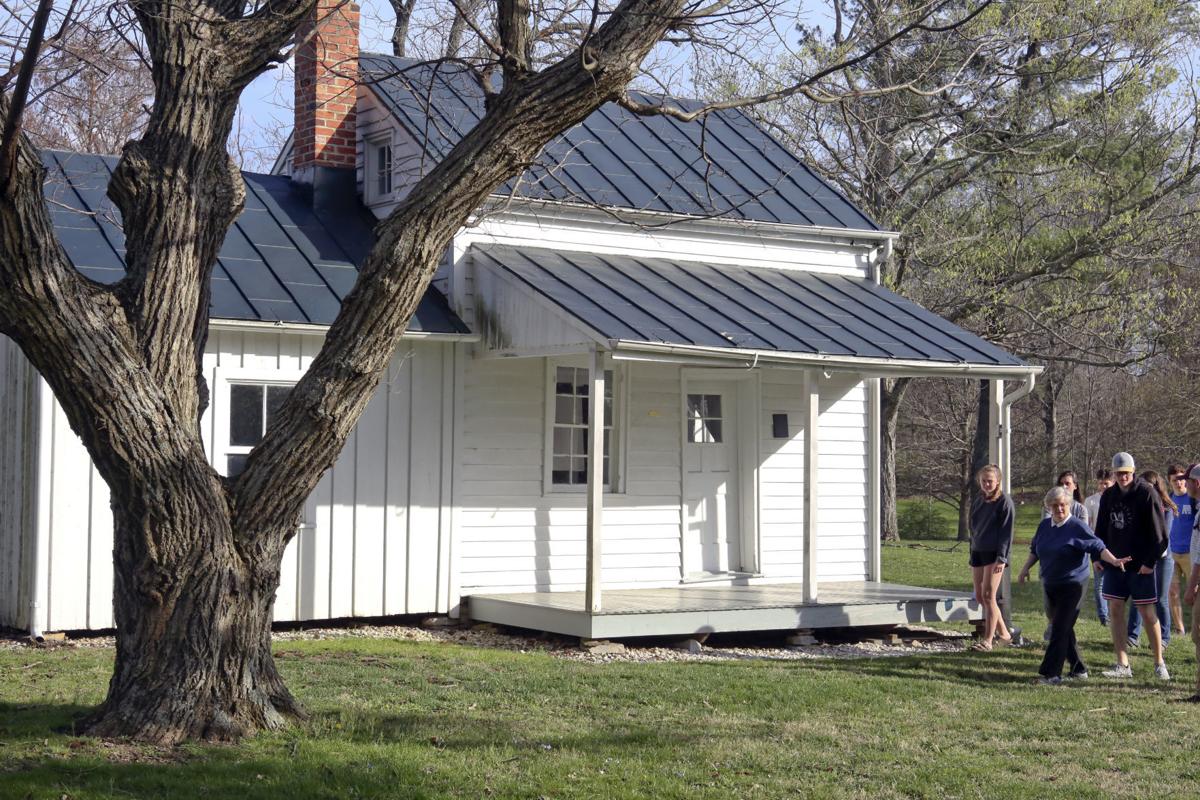 Virginia Tech Appalachian Studies professor Anita Puckett leads a student tour of the structure which was officially named Fraction Family House by the university’s Board of Visitors this month. 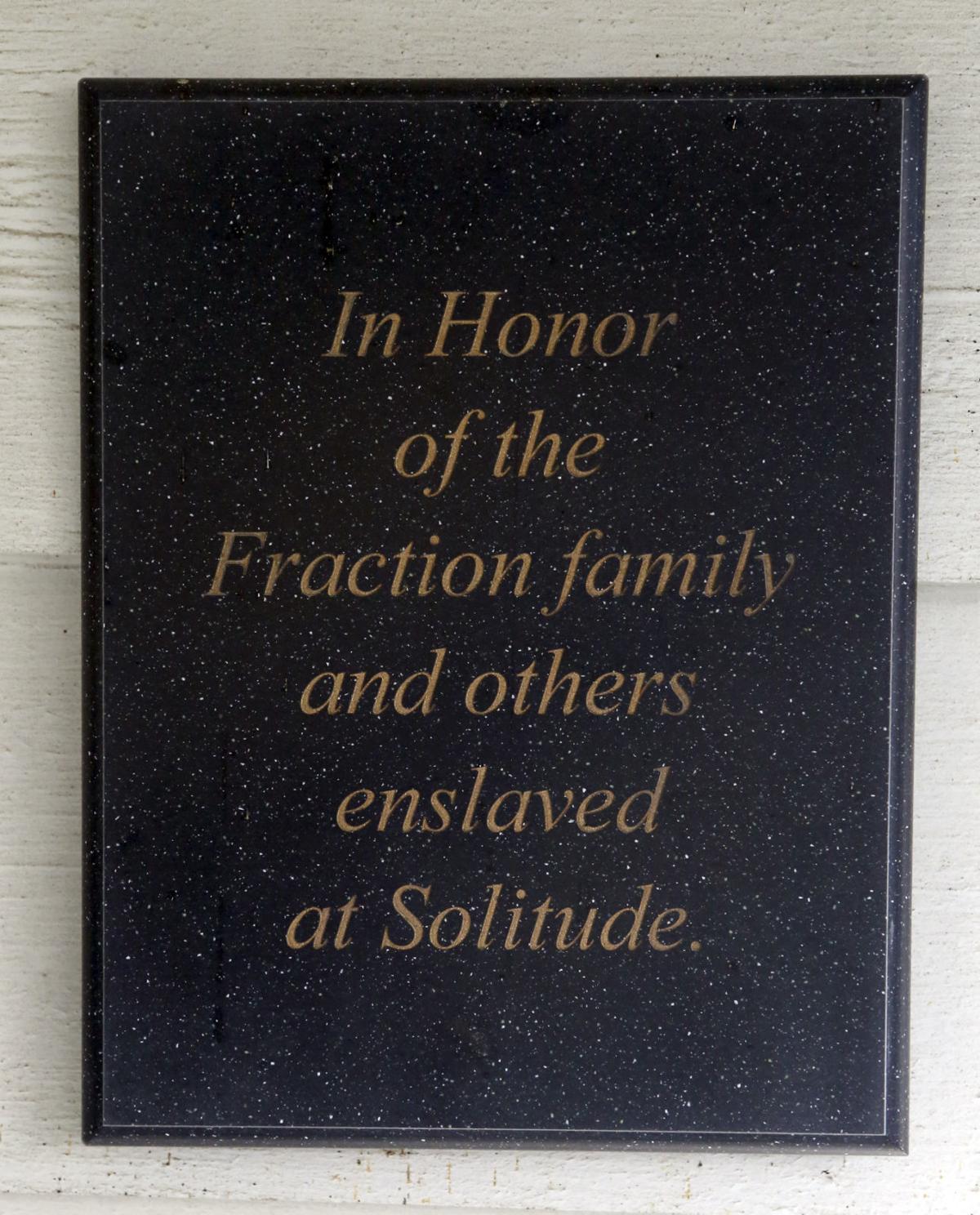 A temporary plaque is currently attached to the Fraction Family House. 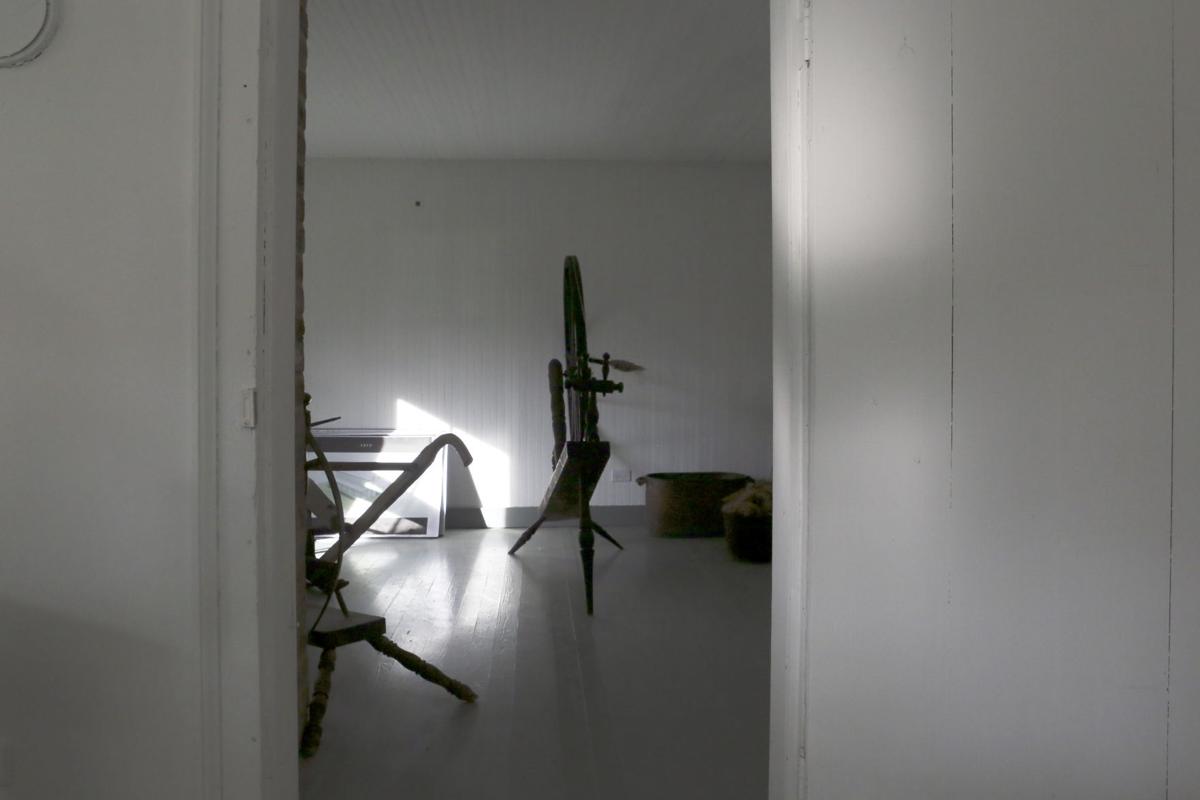 A look at the inside of the Fraction Family House.

BLACKSBURG — The second oldest structure on Virginia Tech’s campus is now named for an enslaved family who worked the land around it.

The Fraction Family House was officially named by Virginia Tech’s Board of Visitors by unanimous vote in early April.

Historians believe the Fractions had the most family members who lived at the Smithfield, Solitude and Whitethorne plantations on land that is now part of the Tech campus, as well as the Hethwood area of Blacksburg.

The family’s history and the building were in danger of being forgotten. But both are now memorialized at Virginia Tech in the form of the three-room, white home near the Duck Pond in the shadow of the Solitude Mansion.

The building is a reminder of what the Fractions and other blacks at that time did to help build the university, said Kerri Moseley-Hobbs, a descendant of Thomas Fraction, who was enslaved at Solitude and later enlisted in the Union Army during the Civil War. Naming it for her ancestors to commemorate all the African Americans who worked the land is the right thing to do, she said.

“It’s smack in the middle of Virginia Tech,” Moseley-Hobbs said. “We were here and we are here.”

According to the university, Solitude is the oldest structure on the campus, built more than 200 years ago, while the outbuilding now named for the Fractions was erected several decades later.

It’s only the second building named for African Americans on campus, according to Virginia Tech history professor Peter Wallenstein, who has written books and taught classes on university history. The other is Peddrew-Yates Hall, named for the university’s first black student and graduate, which was dedicated in 2002.

The university Board of Visitors named the Fraction Family House “in acknowledgement of the contributions of the Fraction Family in the creation and emergence of Virginia Tech as a major land-grant university, and in accordance with the university’s efforts to transform an historic location into a site for the interpretation of the African American experience on campus and the region,” according to the approved resolution.

To commemorate the building with the name of African American forebears on campus is a monumental step, historians said.

“Building names are the names a community chooses to recognize and celebrate,” said Daniel Thorp, a Virginia Tech history professor who has written about African American history in Montgomery County. The Fractions and other enslaved people “are the people who built this community, so it’s great to see official recognition.”

Who were the Fractions?

A memorandum written by Virginia Tech Appalachian studies professor Anita Puckett recommended a building plaque that says: “In honor of the Fraction family and other enslaved persons who lived and worked on this site and contributed to creation of the original educational institution.”

The Fractions were a large family enslaved by the Prestons — the plantation-owning family . The Fractions most likely did agricultural work , Thorp said.

It’s unlikely the Fractions actually lived at the cabin now bearing their name, he said. But the identities of those who lived there are unknown — so university officials thought it made sense to name the building after the largest family.

Little is documented about the enslaved families like the Fractions at the Solitude Plantation, but they probably lived in a number of slave cabins along Stroubles Creek , Thorp said.

Historians estimate the Prestons owned almost 100 people who worked on Smithfield. James Preston later subdivided his plantations and the slaves among three of his children.

Robert Preston, James’ son, owned a number of the enslaved Fractions on Solitude Plantation, which was situated around the present-day Duck Pond . He sold about 250 acres, his mansion next to the Duck Pond and several farm buildings to the newly formed Virginia Agricultural and Mechanical College in 1872 for $21,250 as the first land for its campus.

Other families enslaved on the plantations include the McNorton and Saunders families, and probably several others whose names are unknown. The use of the term “family” in the Fraction House name is meant to be inclusive of all the families who were enslaved on the Prestons’ plantations.

Moseley-Hobbs has extensively researched her ancestors. In 2017 she self-published the dramatized historical fiction novel “More than a Fraction” about Thomas and Othello Fraction, two enslaved brothers who joined the Union Army during the Civil War.

After the war, the brothers returned home to Blacksburg where they attempted to reconnect with their families at Solitude.

Robert Preston, though, did not welcome them home. After the war, he reportedly exchanged gunfire at Solitude with Thomas Fraction near the Duck Pond and later prevented him from attending a worship service at a Blacksburg church.

The Fractions eventually moved away from the Blacksburg area to Salem to get away from Robert Preston. After Thomas Fraction died, much of the family moved to Baltimore, where Moseley-Hobbs lives now.

To have the family name is an honor for the descendants of the Fraction family, Moseley-Hobbs said.

The small cabin now named for the Fractions was built in approximately 1843 and was almost lost to time, as were other slave dwellings that were at Virginia Tech. Its preservation has coincided with the preservation of the nearby Solitude.

The cabin’s inhabitants likely worked as servants or drivers in the main house and lived in the smaller cabin.

The building has stayed upright over the course of the university’s nearly 150-year history — but just barely.

By 1999, what’s now the Fraction Family House was in shambles. That’s when Virginia tech student Michael Pulice stepped in to assess the building’s condition. His 100-page master’s thesis is a comprehensive analysis of the building and provided the the 1843 date. Pulice is now an architectural historian for the Virginia Department of Historic Resources’ Western Region Preservation Office in Salem.

University leaders, largely behind the efforts of retired Virginia Tech humanities professor Elizabeth Fine, were already working to rehabilitate the building and even erect an elaborate structure over it to stabilize it and protect it from the elements.

Today, the building looks practically new. Crews braced the slumping walls and rebuilt the addition to the house, which had been torn down years ago.

Buildings like it were likely common in antebellum Southwest Virginia, Pulice said. But the one on Virginia Tech’s campus is a rare example of one that’s still standing today, he said.

The Solitude Advisory Committee — a group of academics and others focused on preserving the area — had always wanted to give the Fraction Family House a name, according to Puckett.

Since 1989 when Solitude, along with the cabin, was placed on the National Historic Registry, university officials have been searching for an appropriate moniker, she said.

But that proved elusive without any names of enslaved people who lived in the area.

More than a year ago, the committee decided on the Fraction name . Last year, they placed a small plaque next to its door to unofficially honor the family and others.

This year, they decided to seek official recognition. Puckett drafted a memorandum that became the resolution passed by the board of visitors.

It’s unclear when the permanent sign or plaque will go up at the Fraction Family House. The sign will resemble others in front of Virginia Tech buildings. The university received a donor’s pledge to pay for the installment.

The resolution calls for the building to be used as an historic interpretation site. Puckett said the Solitude Advisory Committee will work on determining that.

In 2015, the university convened a panel funded by a Virginia Foundation for the Humanities grant of about $2,000 to develop an interpretive plan for the building with the goal of engaging a broad audience. A specific plan for how history will be interpreted there hasn’t been laid out yet, Puckett said, but the university will likely have input in the wake of officially naming the building.

Puckett said she plans to have a celebration around the Fraction Family House in June as part of the Mountains of Music Homecoming Festival, a Crooked Road event that features music and activities around Southwest Virginia.

Moseley-Hobbs said she hopes to have input on what goes on at the house for years to come, and those at the university have indicated she will. Simply putting the name on the building is a big deal, but there’s more to be done at the site.

“The first step is acknowledgement,” Moseley-Hobbs said. “We’re going to get beyond them as slaves.

“Let’s get to know them as human beings.”

Senior royals walk in the Duke of Edinburgh's funeral procession

Proponents hope three new memorials will help tell a new history of Charlottesville — one that better reflects the decades of slavery, violence and segregation.

Roanoke College on Monday announced the creation of an academic center dedicated to studying race and the legacies of slavery.

The Fraction Family House was officially named by Virginia Tech’s Board of Visitors by unanimous vote in early April.

Virginia Tech Appalachian Studies professor Anita Puckett leads a student tour of the structure which was officially named Fraction Family House by the university’s Board of Visitors this month.

A temporary plaque is currently attached to the Fraction Family House.

A look at the inside of the Fraction Family House.