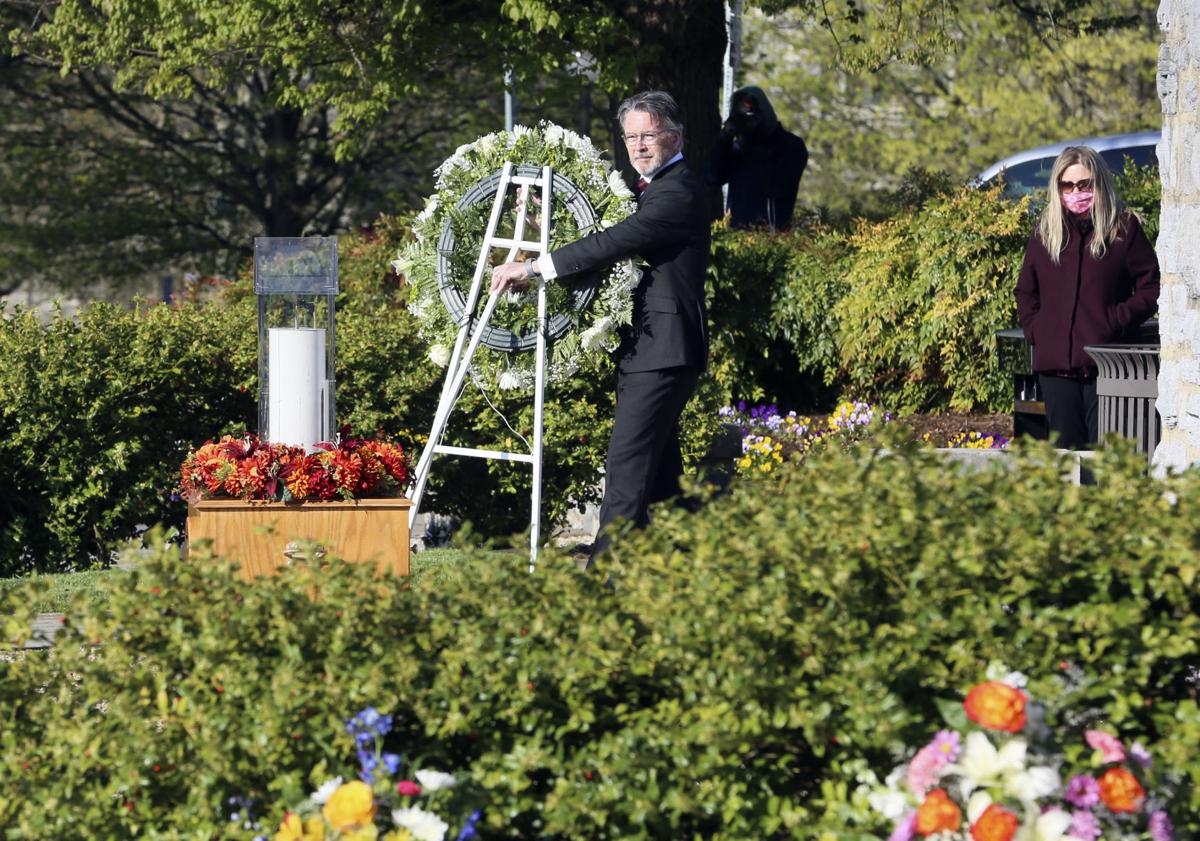 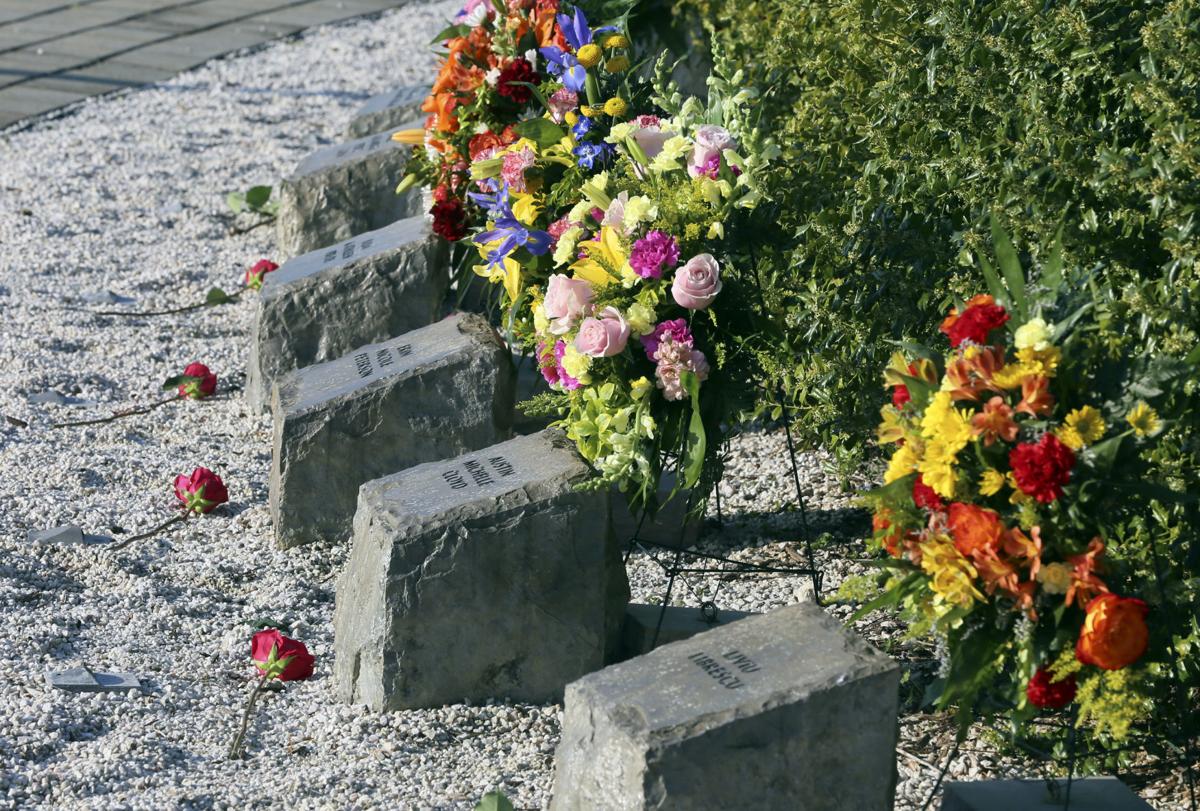 Each of the memorial stones are adorned with a bouquet flowers in addition to a single rose. 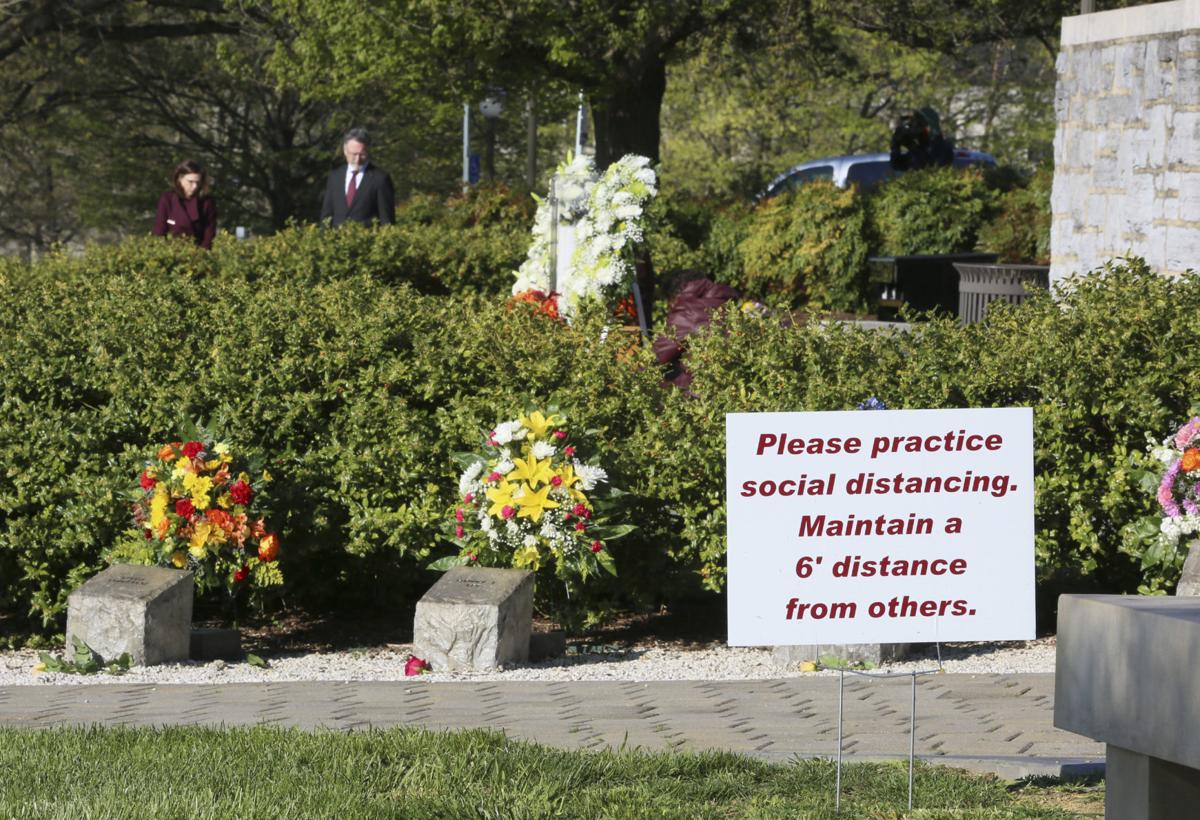 Tech President Tim Sands and his wife, Laura, paused at each memorial stone while observing the Day of Remembrance. 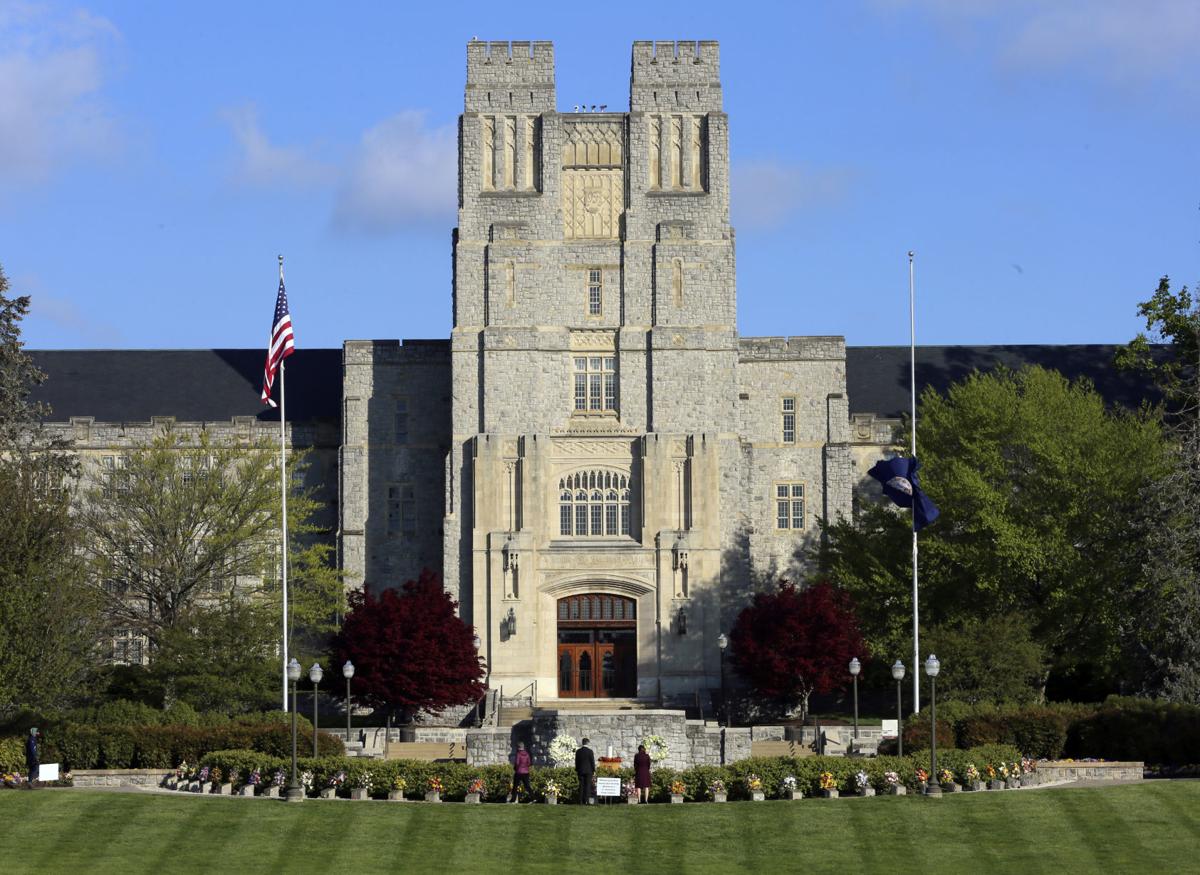 President Tim Sands (center) and his wife, Laura (right), along with another person, observe the Day of Remembrance on Thursday. Thirteen years ago, the university vowed to always remember the 32 lives lost to a gunman on campus. 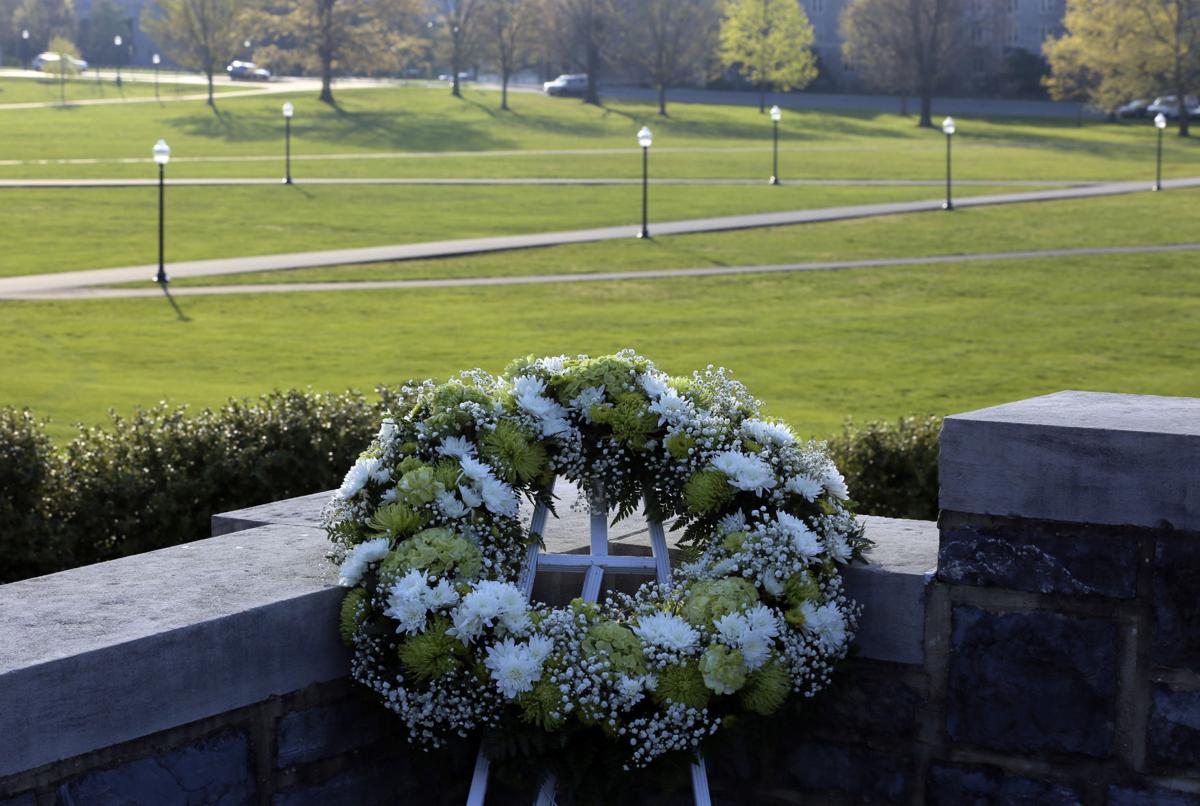 The Day of Remembrance was held on the Drillfield Thursday devoid of the university population. 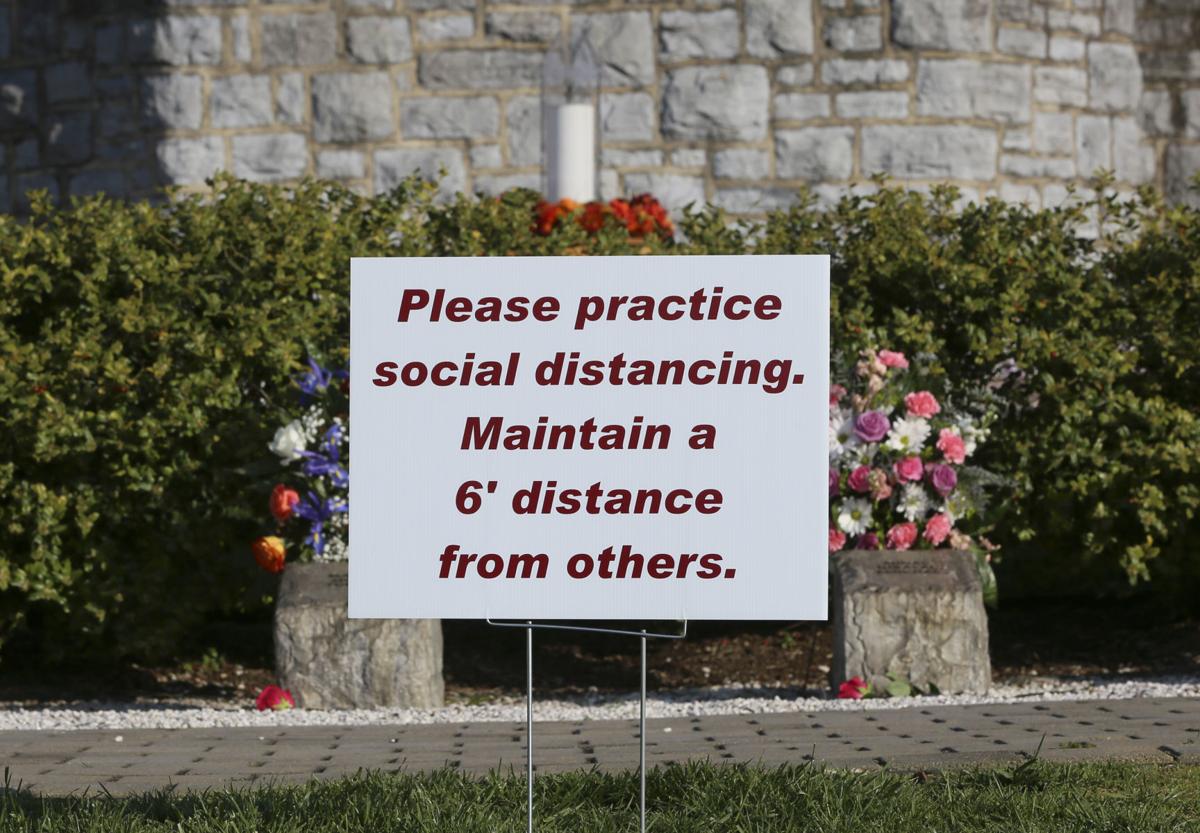 The university will display the memorial candle at the April 16 Memorial for 24 hours.

Each of the memorial stones are adorned with a bouquet flowers in addition to a single rose.

Tech President Tim Sands and his wife, Laura, paused at each memorial stone while observing the Day of Remembrance.

President Tim Sands (center) and his wife, Laura (right), along with another person, observe the Day of Remembrance on Thursday. Thirteen years ago, the university vowed to always remember the 32 lives lost to a gunman on campus.

The Day of Remembrance was held on the Drillfield Thursday devoid of the university population.

The university will display the memorial candle at the April 16 Memorial for 24 hours.

BLACKSBURG — President Tim Sands and First Lady Laura Sands on Thursday morning walked out of Burruss Hall and into the wind.

On opposite sides of the memorial, they placed wreaths with white flowers. As a candle flickered on the edge of extinction, the couple paused at each stone. Each was adorned with a bouquet and a single rose.

Normally, the Drillfield would be alive, with students on their way to class, with onlookers in silent prayer.

But things are not normal.

And Thursday, for many community members, marked an annual reminder that things have not been normal since April 16, 2007, when a gunman killed 32 students and faculty on campus.

Unlike previous anniversaries, Virginia Tech’s 13th Day of Remembrance didn’t include large-scale gatherings amid the coronavirus pandemic. The wreath-laying, usually taking place just before 9:43 a.m., happened at an undisclosed time to prevent crowds from coming to witness. Midnight candle lighting and extinguishing ceremonies were replaced by a solitary candle displayed at the memorial. The 3.2-Mile Run in Remembrance, which usually attracts upwards of 15,000 people to Blacksburg, has gone virtual.

“Every time I hear this term now, ‘new normal,’ we’re going to have a ‘new normal’ when the pandemic’s over, the first time I really ever heard that phrase was right after the shooting at Virginia Tech,” said Mike Ellerbrock, a professor of agricultural and applied economics . “The further we get away from it, it was in ‘07, the more I get afraid that students, our current students, don’t fully realize what happened. Of course, that’s understandable. But what happened was so huge, that those of us who were here will never be over it.”

After the Sandses laid wreaths, the Burruss Hall carillon sounded 32 times across the nearly deserted campus.

“Thirteen years ago, the university vowed to always remember the 32 lives lost on that day, and our commitment to that promise is unwavering,” said Mark Owczarski, a Tech spokesman who helped lead the university’s communications efforts during the tragedy and its aftermath.

The university encourages those who wish from Thursday through Saturday to take part in the Run of Remembrance. Through downloading the app Stridekick, people can join the virtual group, which will log together steps with a goal of reaching 32,000 total miles.

“The virtual walk/run will be held over a three-day period to encourage proper social distancing and adherence to state and local guidelines,” the university’s recreational sports department, which oversees the run, said in a statement this month. “This event is not supporting physical gatherings and is intended to support social connectedness through physical distancing.”

For Ellerbrock, seeing his colleagues and students adapt to the new normal of the pandemic has brought back memories. Two of his students were among the first people killed.

“It’s more poignant, it’s more reminiscent of how the community rallied, just rallied,” Ellerbrock said about this year’s anniversary. He recalls in the aftermath of the shooting how the faculty held numerous meetings about what to say and do when students returned to campus after a week’s break.

“The majority expectation was that few students would come back, it was just such a horrific thing,” Ellerbrock recalled. But in his memory, 90% of students returned.

“It brought tears to my eyes to see those classrooms filled right back up again because students love Virginia Tech. Students love being a Hokie,” Ellerbrock said. “And the very same thing is happening right now. I have received so many unsolicited emails from students at home who really miss being here at Virginia Tech. There’s really something beautiful about being a Hokie.”

Tommy McDearis, senior pastor at Blacksburg Baptist Church, was one of two police chaplains at the time of the shooting. He helped police chiefs in making death notifications to family members of the victims.

“There’s one thing happening now across the country that happened here in Blacksburg during that time. There was an amazing pulling together of people,” McDearis said. “If you lived here during that time, you’re never going to forget how that felt.”

McDearis noted that for the victims’ families, the remembrance will forever be raw. He emphasized that he wasn’t comparing the current coronavirus pandemic with the shooting tragedy, but the shared humanity that has emerged after crises.

“There’s not a connection as to what occurred,” McDearis said. “There is a connection in the way it makes people feel. They were both a very present threat and in many ways even though the worst of life came out, the best in people seemed to come out.”

McDearis said he has a ritual he follows on April 16. He likes, sometime during the day, to walk toward the memorial, and then up to Norris Hall, where 30 of the 32 victims were killed. He looks at the names inscribed on the memorial stones and prays for the families, and for all who were affected by the tragedy.

McDearis said Wednesday that he hadn’t made up his mind. As a pastor, he wants to set an example of social distancing. People aren’t really supposed to be wandering around on campus.

On further reflection, he said, maybe he would do so, anyway. He wasn’t sure.

The 32 faculty and students who were shot to death at Virginia Tech on April 16, 2007

I always visit the memorial on April 16, but today I'll remember them from afar.

I am a 1981 graduate of Virginia Tech. I now live hundreds of miles away, but by coincidence I was in Blacksburg when the shootings occurred. It was a horrifying day, watching news reports on WDBJ all day long. I will never forget April 16.