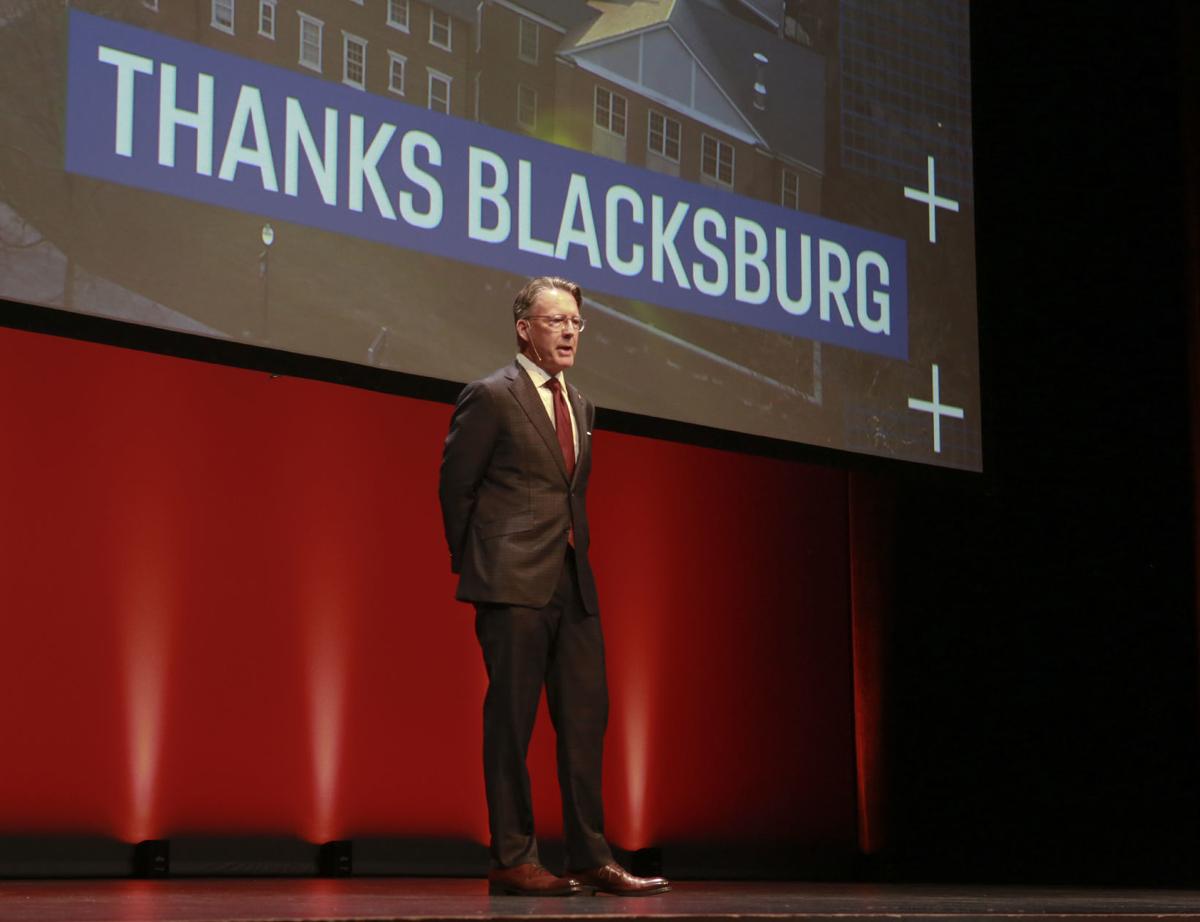 Virginia Tech President Tim Sands gave a positive assessment of the state of the university at his annual speech to begin the academic year and he laid out his goals for the next four years. 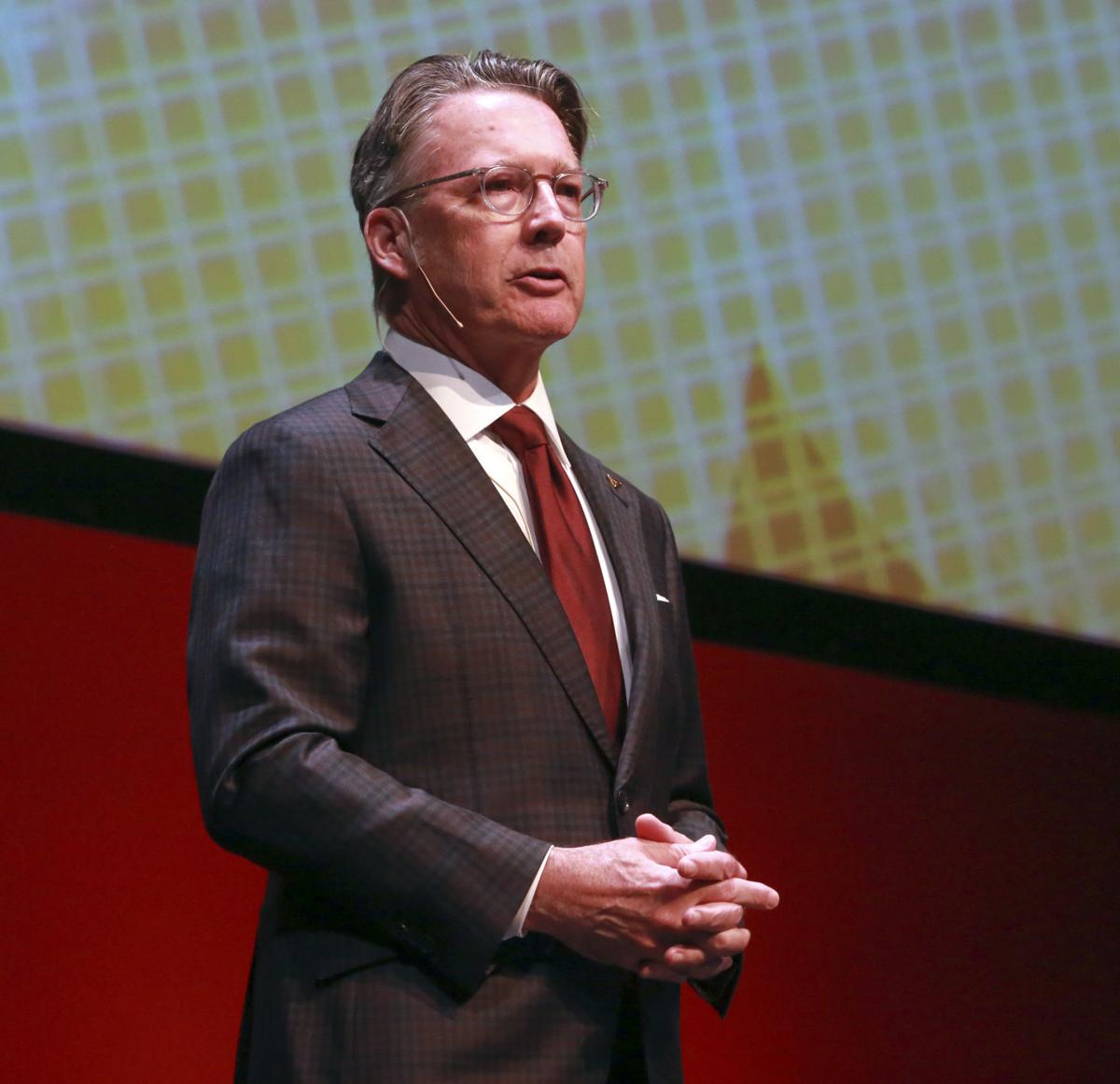 BLACKSBURG — Outside the Moss Arts Center on Friday afternoon, the largest freshman class in Virginia Tech history ended its second week of school, while inside, President Tim Sands gave a rosy assessment of the state of the university and laid out an ambitious plan for its future.

The speech is a yearly ritual that marks the beginning of the academic season. This was Sands’ fourth such address.

Sands reported that new donations and pledges grew to $182 million this past year, which he said was double the amount of new support five years ago when he took the helm. He also touted the largest donation in university history, $50 million for the Fralin Biomedical Research Institute in Roanoke.

Even an accidental over-enrollment of about 1,000 students is good news in the long term, according to Sands.

“The surge will have an impact on all of us this year. However, if we manage it properly, and I believe we are — we’ll have 1,000 more Hokies in our community,” Sands said. “And that’s a good thing because Hokies change the world.”

It’s also expensive. The university expects to spend $8.7 million to house students in a pair of Blacksburg hotels.

Sands acknowledged the stress the surprise numbers will place on the town and its leaders, some of whom were in the audience. He thanked them for their support.

In an interview afterwards, Blacksburg Mayor Leslie Hager-Smith praised the university for discussions with town officials on coping with the surge.

“I think a happiest of all scenarios is that it never happened,” she said. “But the conversation that took place in the lead-up to finding residences for these students involved town staff daily.”

Hager-Smith said she was invited to higher level discussions where “we talked about a panoply of things that are going to be important.

“We quickly shifted to: ‘This is going to happen, now what?’” she said. “It was good problem solving.”

Sands assured the audience that the university has learned from its miscalculation and will do better.

“We will take all the factors that led to the surge into consideration as we prepare to admit next year’s entering class to make sure that we don’t significantly overshoot, or undershoot, our target,” he said.

But growth will continue.

“Our goal is to grow Virginia Tech to the right size, and our milestone continues to be about 30,000 undergraduate students by 2023,” Sands said.

Last year, there were 27,140 undergraduate students. Final numbers for this year will be available on Sept. 23, Sands said.

Town Manager Marc Verniel said growth has been the president’s consistent message, and “2023 is right around the corner. So what happens next, and what can the town and the university support in Blacksburg? Those are the conversations we’ll be having next.”

It’s not just student enrollment growth, either, Hager-Smith said. A handful of companies started by Virginia Tech alumni are expected to add about 1,000 jobs in town, and those employees will bring families.

“Blacksburg has a tradition of welcoming the stranger,” the mayor said. “And I don’t want to see that change.”

Sands laid out ambitious plans in his speech. Among them was increasing the number of alumni donors to 46,000. Currently, 26,000 give, he said.

Increasing the diversity of the student body is a priority, as it has been perennially since the early 2000s under the late President Charles Steger.

Today about 14 percent of the student body comes from minority populations, the highest number in many years, Sands said. But it’s not enough.

“We are striving to reach 25% underrepresented minority students in our 2022 entering undergraduate class,” he said. “This falls short of being representative of the demographics of Virginia, but it is a first step.”

To watch a recording of the speech, visit https://vt.edu/state-of-university.html.

Virginia Tech President Tim Sands gave a positive assessment of the state of the university at his annual speech to begin the academic year and he laid out his goals for the next four years.