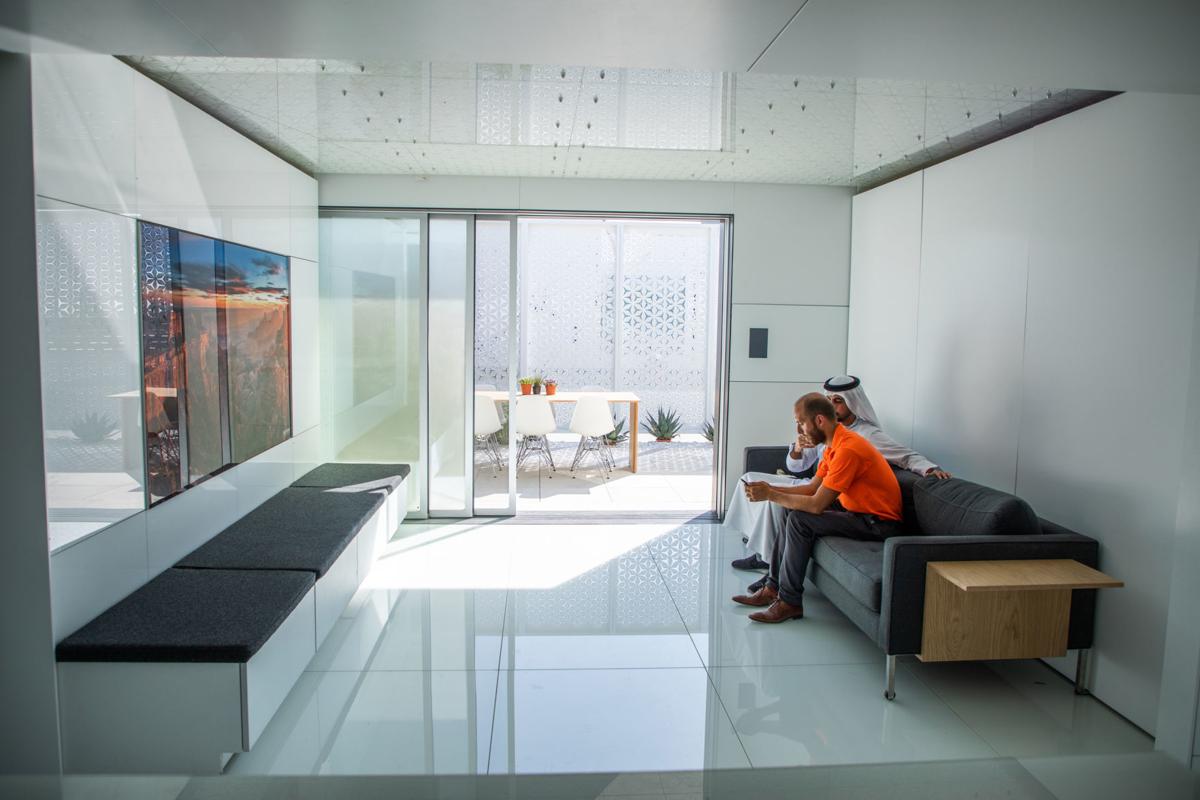 FutureHAUS team member Bobby Vance talks to a visitor in the living room of Virginia Tech’s futuristic home prototype during the Solar Decathlon competition in Dubai. The house took only about a week to assemble from its component “cartridge” parts. 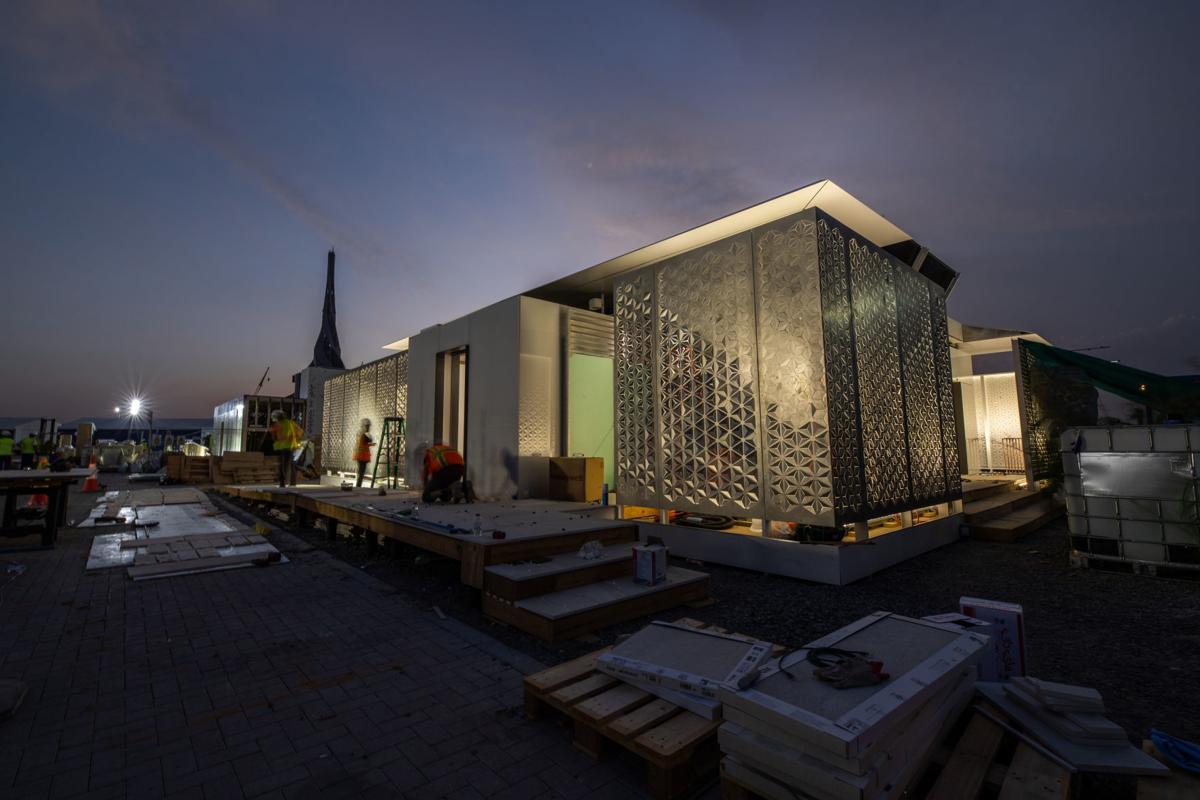 Virginia Tech’s FutureHAUS was rebuilt after a fire destroyed the prototype of the futuristic house that generates more power than it uses. The new iteration of the house was awarded first place in the Solar Decathlon competition in Dubai. 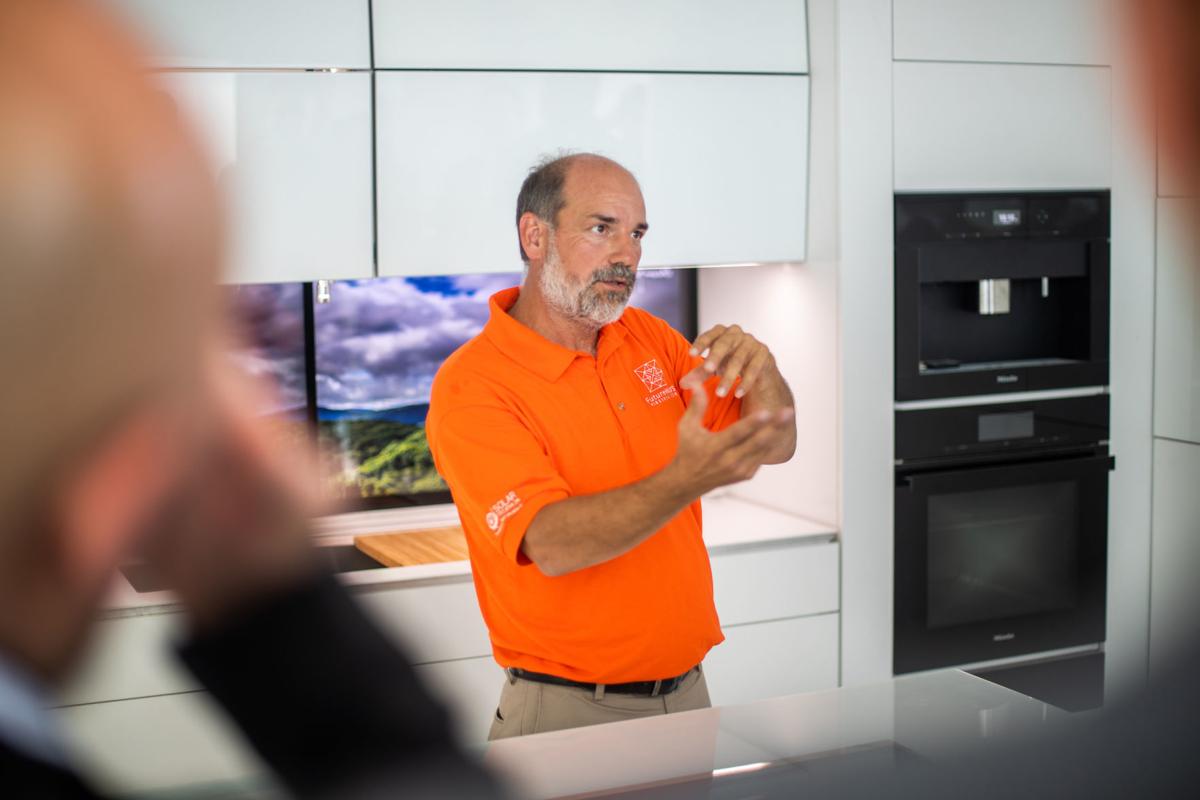 Virginia Tech architecture professor Joe Wheeler talks to a crowd inside the kitchen of FutureHAUS Dubai.

The 900-square-foot house not only boasts futuristic features like a mailbox on the roof for drone deliveries, but it was also designed to withstand desert heat while producing more electricity than it uses.

This is the second FutureHAUS prototype that Virginia Tech has built, after the first was destroyed in a warehouse fire in early 2017.

Architecture professor Joe Wheeler, who leads the effort, said he wasn’t seriously considering entering the Solar Decathlon Middle East before the fire. But then the competition turned into a rallying cry to help the group pick up the pieces and rebuild.

“We knew we had all the technology, we had all the research there. It just wasn’t in physical form,” Wheeler said. “We needed some way to kind of move us forward. This was an amazing way.”

The Solar Decathlon Middle East, an event created by the Dubai Electricity and Water Authority and the U.S. Department of Energy, required the FutureHAUS team to simulate a real family living in the home over the past 10 days. They did laundry, cleaned dishes, charged an electric vehicle and kept the home at a cool 73 degrees while solar panels on the roof generated power to keep everything humming along.

The house was designed to have a minuscule environmental footprint, with walls to shade the building from the Dubai sun and a system that recycles clean water for reuse in the home.

The team of about 75 Virginia Tech students that built the house designed an app that showed real-time energy data, so they could experiment with things like closing certain doors to achieve optimum efficiency.

“So much research went into selecting the right appliances, the right systems, the right HVAC for the house,” student team leader Laurie Booth said. “It took a lot of understanding of how a house actually works. That’s how we were so successful.”

On Wednesday, the Solar Decathlon judges awarded Virginia Tech first place among the 22 teams in the competition.

FutureHAUS Dubai was designed and fabricated in Blacksburg using cartridges, similar to the university’s past prototypes. The idea is to build all the technology, electrical and plumbing components into the walls in a factory so homes can be quickly assembled at job sites.

For this competition, cartridges were shipped to Dubai. The structure of the home was assembled in one day, it was generating electricity on the second day and was completely finished — inside and out — within a week.

Wednesday’s victory comes after the first FutureHAUS won a similar competition in 2010. That house toured the world for various demonstrations before returning home to Blacksburg where Wheeler hoped it would be on permanent display someday.

But the fire at the Environmental Systems Laboratory at Virginia Tech’s Prices Fork Research Station destroyed the prototype, along with years of work, in February 2017.

The second iteration carried over a lot of the same features, reimagined with a fresh design.

The bathroom sink was 3D-printed as one piece with all the plumbing baked in. All countertops are motorized in order to rise or fall for better accessibility.

Almost every surface features a display, from the kitchen table to the backsplash. A television is mounted on a cutout in the wall that swivels around, so a family can watch movies in the living room or flip it around for a video conference call in the office.

Walls move to make rooms larger or smaller, depending on how they are being used, and a bed folds up against a wall to save space. Batteries store energy to power the whole operation.

Now that the trophies have been awarded, Virginia Tech’s team will begin disassembling the house. It will be shipped back to Blacksburg and — Wheeler hopes — put on display somewhere on campus for tours.

“We are floating on cloud nine right now,” Booth said via telephone from Dubai on Wednesday. “We’ve talked about this day for two years now. We’ve always said what if — what if we won?

“Now to actually have that trophy in our hands, it realizes all the hard work that’s been put into this project.”

Communities in Louisiana come together after disaster

BLACKSBURG — A massive crane lowered sections of paneling from the sky as individually designed cartridges snapped into place. Working through…

BLACKSBURG — FutureHAUS represented years’ worth of work from dozens of students.

BLACKSBURG – Virginia Tech researchers are getting ready to show off their vision for a smart house of the future, complete with movable walls…

FutureHAUS team member Bobby Vance talks to a visitor in the living room of Virginia Tech’s futuristic home prototype during the Solar Decathlon competition in Dubai. The house took only about a week to assemble from its component “cartridge” parts.

Virginia Tech’s FutureHAUS was rebuilt after a fire destroyed the prototype of the futuristic house that generates more power than it uses. The new iteration of the house was awarded first place in the Solar Decathlon competition in Dubai.

Virginia Tech architecture professor Joe Wheeler talks to a crowd inside the kitchen of FutureHAUS Dubai.