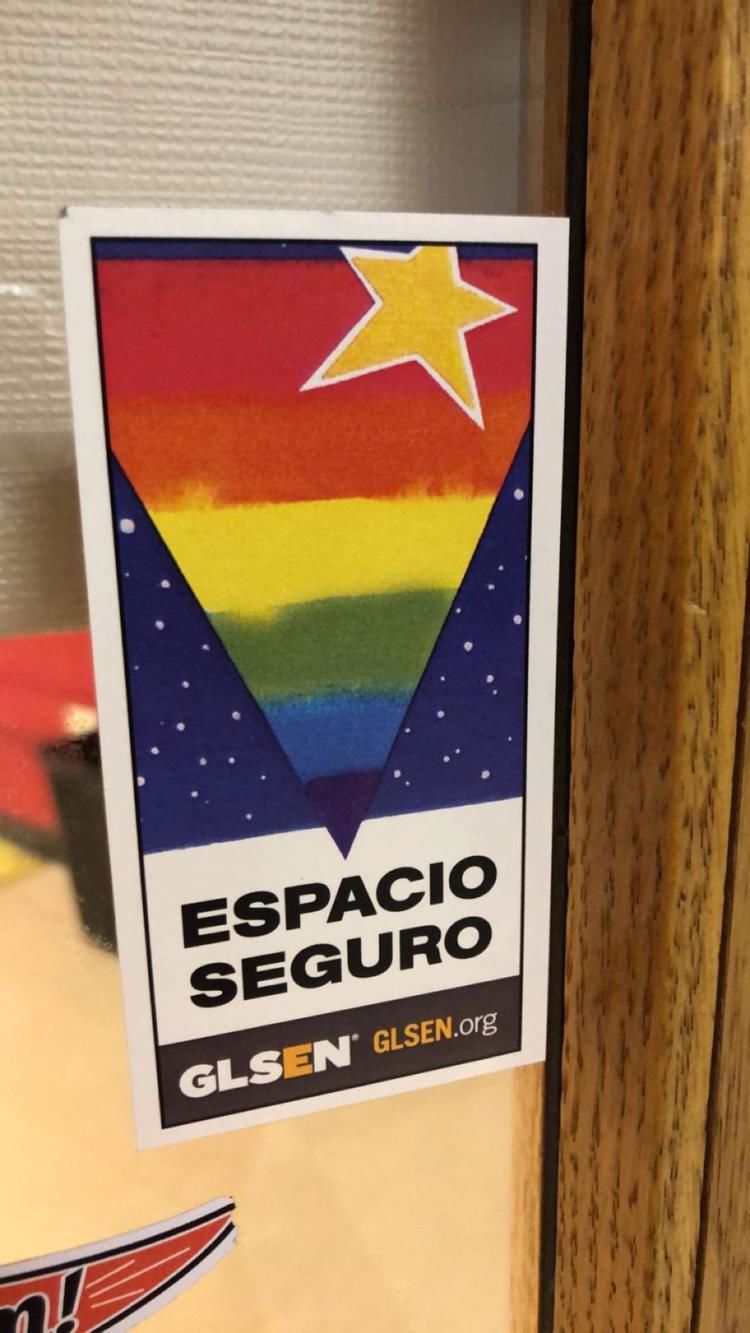 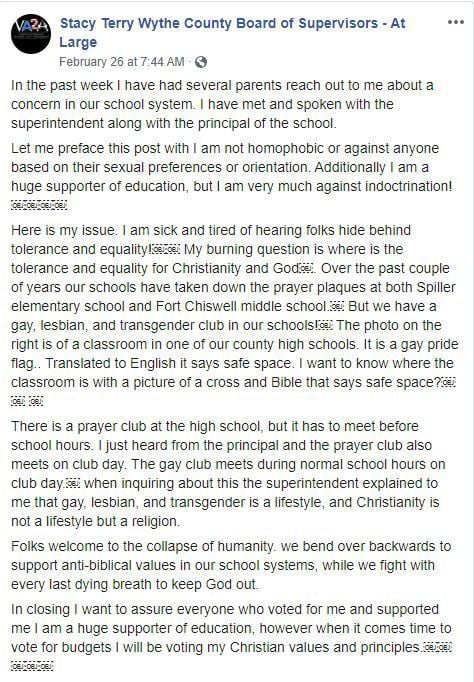 WYTHEVILLE — A Wythe County supervisor came under fire late last month after he made a controversial statement on his Facebook page comparing Christian and LGBTQ tolerance in the county’s school system.

In the post to his at-large supervisor Facebook page, Stacy Terry said Wythe County schools were less tolerant of Christianity than they are of the LGBTQ community.

The plaques, which were imprinted with a prayer, were removed in 2017 and in 2019, respectively after the school system received complaints from the Freedom from Religion Foundation that their presence inside a public school was unconstitutional.

“But we have a gay, lesbian, and transgender club in our schools,” Terry wrote in his post.

He then referenced an accompanying photo of a classroom door at Rural Retreat High School adorned with a sticker with gay pride-esque colors that reads “ESPACIO SEGURO,” which translates to “safe space.”

“I want to know where the classroom is with a picture of a cross and Bible that says safe space,” he wrote.

Terry also expressed resentment that “the gay club” at the school was permitted to meet during normal school hours at Rural Retreat High School while the school’s prayer club had to meet before school hours.

“Folks, welcome to the collapse of humanity. We bend over backwards to support anti-biblical values in our school systems, while we fight with every last dying breath to keep God out.”

Terry later edited his post to say that the principal of that school, fellow supervisor Rolland Cook, told him that both types of clubs meet during normal school hours on club days.

Cook, who represents the West Wytheville District on the board of supervisors, clarified later that all school clubs meet for 20 minutes during school hours on club day, which occurs every nine weeks. No club, he said, meets during normal school hours outside of club day.

He also said that the classroom with the “safe space” sticker is not club-specific and is open to any student who feels they need to use it.

Terry ended his post by saying, “In closing I want to assure everyone who voted for me and supported me I am a huge supporter of education, however when it comes time to vote for budgets I will be voting my Christian values and principles.”

Terry’s post prompted quick backlash, with more than a thousand comments and 266 shares.

“I am saddened by the critical tone and lack of understanding in this post by a local government representative and Christian,” one user wrote in the comments section. “Perhaps one day you will feel differently.”

“I thought my vote for you was legitimate based on your opinions about the Expo Center in Wytheville, but thank you for proving I made a mistake,” another user wrote.

Terry’s statement prompted the creation of an online petition to remove him from the board of supervisors. By Feb. 27, the petition had gathered more than 450 signatures, but it is unclear how many of those signatures were actually from Wythe County residents.

A few showed support for Terry’s stance on the matter.

“Thank you for standing your ground,” one person wrote.

Another said, “Thank [you] Mr. Terry. This is the way I feel also and I support Staci [sic] all the way. I am glad someone has the guts to speak out. We have your back!”

When asked for clarification on his statement about voting his values and principles when it came time to vote for budgets, Terry said “I will vote like I do with any vote I cast. I will vote my Christian values.”

When asked if that would affect school funding, Terry said it would not.

“I honestly think it (the post) was taken completely out of context. I don’t hate anybody and I don’t dislike anybody. I have friends and family who live those lifestyles and I love them just the same.”

Terry also said that he had nothing against the Gay-Straight Alliance club.

“I think it is wonderful that the teacher has this club and support group,” he said. “I have no desire to see it stopped … I don’t want her to stop doing what she’s doing. All kids need to go to school, be educated and be in a safe learning environment.”

Terry said he put his voice to the matter after he heard from parents of some students who said they felt they were in the minority and were being left out.

“I promised to represent all people,” he said. “All we were looking for was some type of quality representation.”

Virginia Tech earned a failing grade as the result of a study of how transparent its governing board is to the public.

Colleges in Virginia should do more COVID-19 testing to stop transmission, experts say

Colleges in Virginia should consider ramping up their COVID-19 testing from the fall semester, some public health experts say, if campuses even reopen at all in the coming months.

Virginia Tech to hold 6% of spring classes fully in-person, much like the fall

While thousands of Virginia Tech students will return to the Blacksburg campus this weekend for the spring semester, only 6% of classes will be fully in-person – the same rate as the fall.

University presidents in the region denounced a violent siege at the Capitol Wednesday while avoiding explicit mention of President Donald Trump's instigation of the melee by his unremitting spread of conspiracy theories.

“I can’t in good conscience leave now,” Virginia Tech's Karen DePauw thought on the drive back to campus, she recalled in a recent interview.