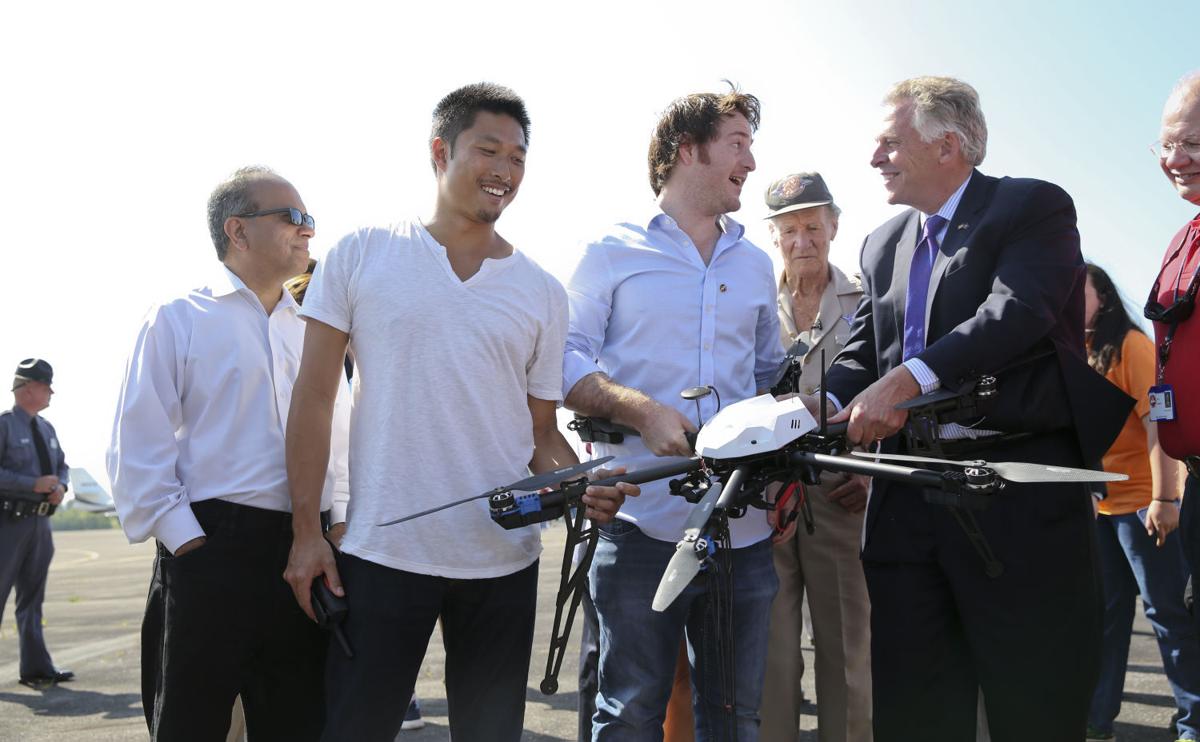 Gov. Terry McAuliffe holds a drone at the 2015 event in Wise County where a Nevada-based company uses drones to deliver payloads of medicines to Wise County Fairgrounds, the first time a drone had ever delivered a package. Wise County is pitching itself as a center for drone research. 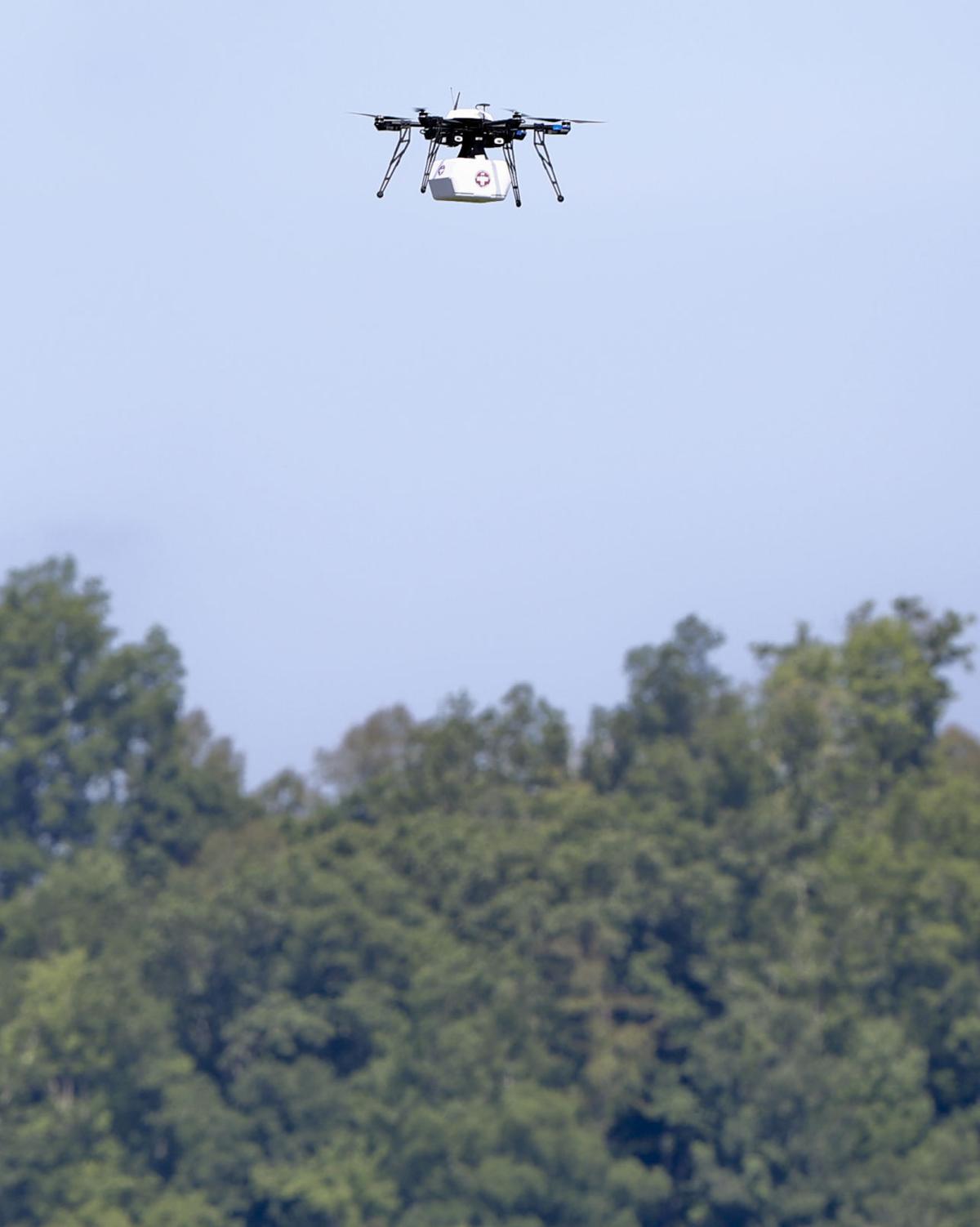 A drone takes off from the Lonesome Pine Regional Airport field to travel with a payload of four medications to the Wise County Fairgrounds during the annual Remote Area Medical three day clinic in Wise. 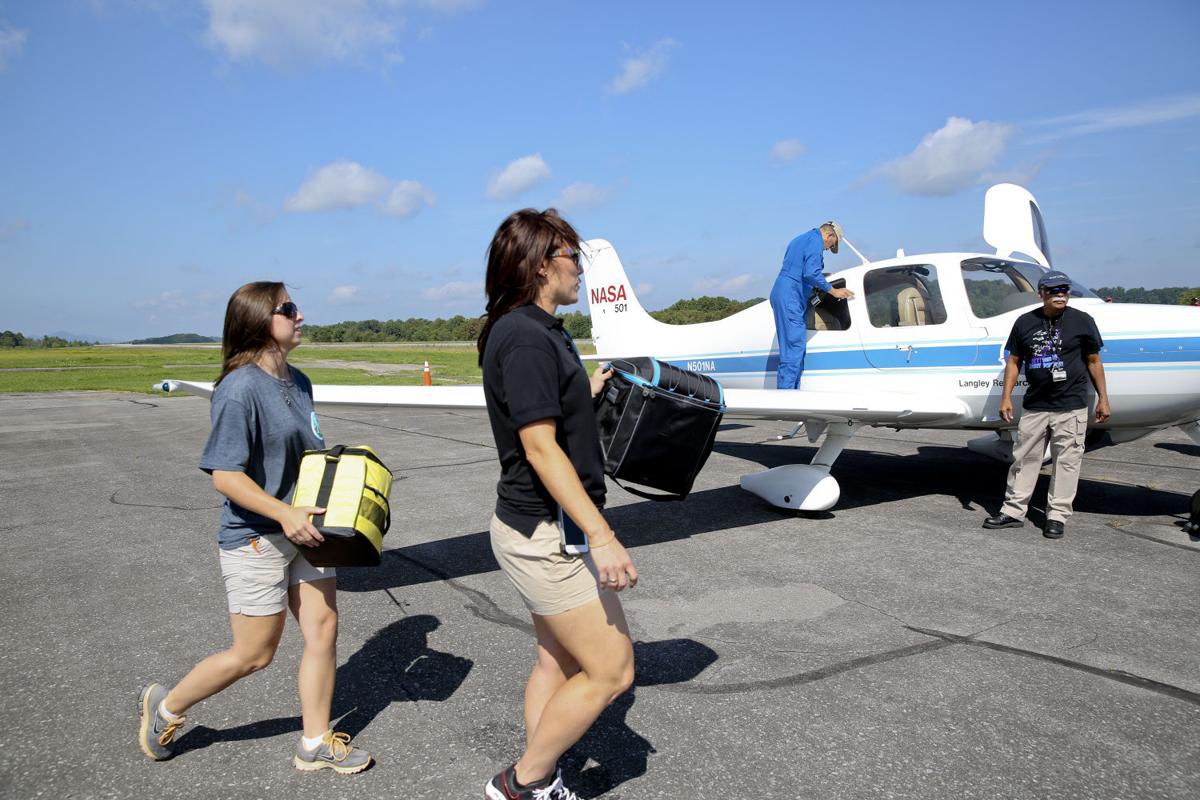 Medications arrive via a remotely piloted fixed-wing SR-22 operated by NASA's Langley Research Center, from the Tazewell County Airport to the Lonesome Pine Regional Airport. They were then carried in a series of payloads to the Rural Assistance Medical Clinic at the Wise County Fairgrounds via a small hexacopter operated by Flirtey,Inc., an Australian start-up who partnered with organizations, including The Mid-Atlantic Partnership at Virginia Tech.

WISE — Onlookers at the Wise County Fairgrounds whipped out their smartphones Friday morning right after an odd object that appeared out of the blue sky floated down to a small crowd of photographers, pharmacists and technology entrepreneurs.

It was a drone — otherwise known by industry types as an unmanned aircraft system.

The drone, a hexacopter roughly the size of a portable fire pit, carried no more than five pounds of medicine in what became the first drone package delivery in the United States.

The medicine delivery benefited two dozen patients who came to the fairgrounds as part of an annual and free multi-service clinic for people who live in remote areas where pharmacies and doctor’s offices are not within short driving distances.

The exercise marked another positive development this year for the drone industry, which isn’t always praised due to the role it could play in warfare and national security.

In May, the FAA relaxed the laws governing exercises conducted by the six test sites. As long as the test sites don’t fly the drones any higher than 200 feet — and not within the vicinity of a heavily populated area or an airport — they are free to move forward with test runs without waiting on the FAA green light.

“This is a tremendous accomplishment,” Jon Greene, associate director for the aviation partnership, said Friday morning before the test run. “This team we put together, they’re very excited about using this technology.”

The test run started at the Lonesome Pine Airport in Wise, where a NASA drone dropped off the medicine.

The NASA drone, a Cirrus SR22, is a small four-seat aircraft. The SR22 flew itself, but a pilot was in the aircraft for emergency reasons.

Once dropped off, the packages were then attached to a smaller hexacopter drone developed by Flirtey. With a little less than two miles separating the airport and fairgrounds, the company’s drone made a total of three trips to deliver a total of about 20 pounds of medicine to the clinic.

A round trip of this distance would typically take 10 minutes for Flirtey’s drone, but Greene said the organizers took some extra time with each trip to show the drones off to media and Gov. Terry McAuliffe, one of the public figures that attended the test run.

Now headquartered in Reno, Flirtey was founded in Australia more than a year ago. The startup is trying to get into the commercial drone delivery business, something that has moved forward in Australia and New Zealand, but still is not legal in the U.S.

Greene said he’s not sure when commercial deliveries via drones will gain traction in the U.S., but added that the Virginia Tech site will continue flying similar runs to continue the research.

“It’s going to be a gradual rollout,” where “we’re going to do more things like this,” he said. “In the meantime, we’re going to continue to work in humanitarian opportunities.”

Greene said the humanitarian work could involve activities such as delivering goods to disaster areas.

Remote Area Medical, the clinic at the fairgrounds that will be open until Sunday, is among other annual free clinics in remote areas nationwide.

The clinic drew about 2,500 people from the region seeking care, but those who worked the event said the fairgrounds on Friday probably saw more patients than that.

Shamly Abdelfattah, an associate professor of pharmacy at the Appalachian College of Pharmacy in Oakwood, said drones provide an interesting option for delivering medication to residents who live in the rural pocket of Southwest Virginia.

Abdelfattah said it’s not uncommon for region residents to drive one or two hours to find a pharmacy or doctor. Coupled with winding, mountainous roads that aren’t always simple to navigate after snowfall or other inclement weather, people there sometimes have to forgo care, he said.

“People here are underserved,” he said. “If we can provide them [medicine] in a timely manner, it will definitely save lives.”

Paula Hill-Meade, a nurse practitioner and clinical director for the mobile Health Wagon, the nonprofit that coordinated the clinic, said: “Sometimes we’re two hours from a pharmacy or hospital. You would not believe the number of times I’d be out, and I’ll be seeing patients, and while I’m seeing patients, I will realize I need a different size suture set. Or I wish I had this medicine. It can be life saving for us.”

R.L. Beard, who lives about 35 miles away from the fairgrounds in Clinchco, was one of the people who received medicine delivered by the drones. He was there to receive a prescription of Nexium, which he uses to treat acid reflux.

“If I run out of that for two or three days, I’m in trouble,” Beard said.

Accessing medicine or care in the past hasn’t always been easy for Beard, who said that the nearest pharmacy to his home is 12 miles away.

“There’s no straight roads up here. It takes a while,” he said, adding people can also get snowed in. “We’ve had a couple of [snows] where we were in for eight days, and didn’t have no way out or nothing until they got the roads clear.

“Something like that, during the eight days, I may need the medication. Would be nice to have a drone come by.”

A Franklin County woman filed a lawsuit against Famous Anthony’s, alleging that she contracted hepatitis A from eating at one of the chain’s r…

A Stafford County couple in their 40s contracted the virus and died within about two weeks of each other, leaving behind five children and one grandson.

Gov. Terry McAuliffe holds a drone at the 2015 event in Wise County where a Nevada-based company uses drones to deliver payloads of medicines to Wise County Fairgrounds, the first time a drone had ever delivered a package. Wise County is pitching itself as a center for drone research.

A drone takes off from the Lonesome Pine Regional Airport field to travel with a payload of four medications to the Wise County Fairgrounds during the annual Remote Area Medical three day clinic in Wise.

Medications arrive via a remotely piloted fixed-wing SR-22 operated by NASA's Langley Research Center, from the Tazewell County Airport to the Lonesome Pine Regional Airport. They were then carried in a series of payloads to the Rural Assistance Medical Clinic at the Wise County Fairgrounds via a small hexacopter operated by Flirtey,Inc., an Australian start-up who partnered with organizations, including The Mid-Atlantic Partnership at Virginia Tech.