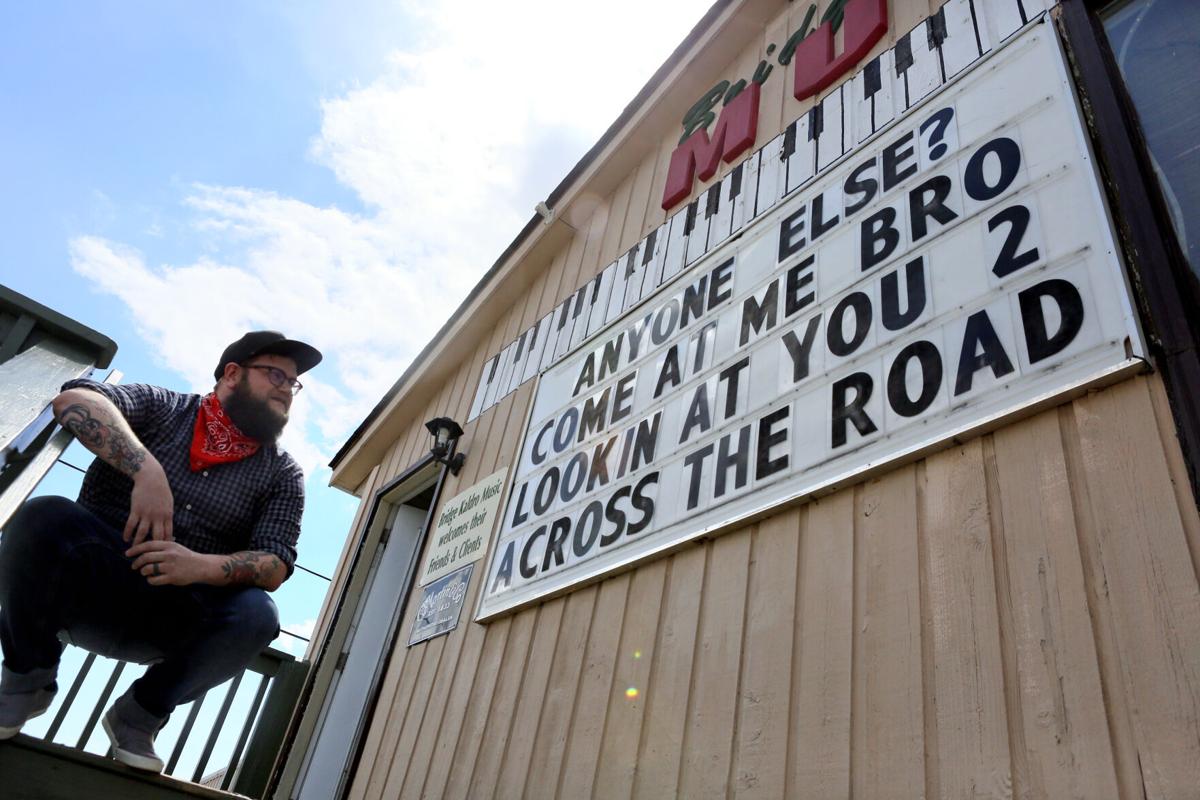 Jim Bohon, a music instructor with Bridge Kaldro Music, is having fun poking fun at the store’s Christiansburg retail neighborhood. 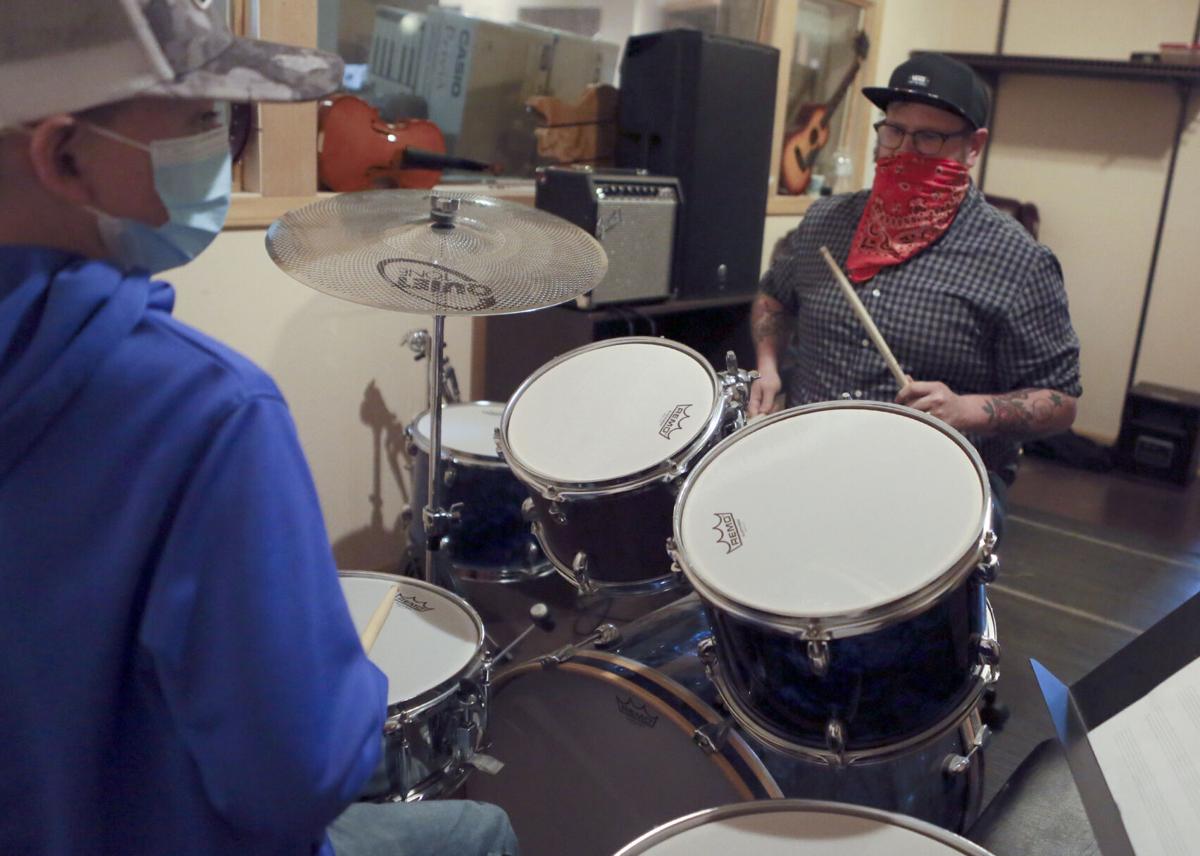 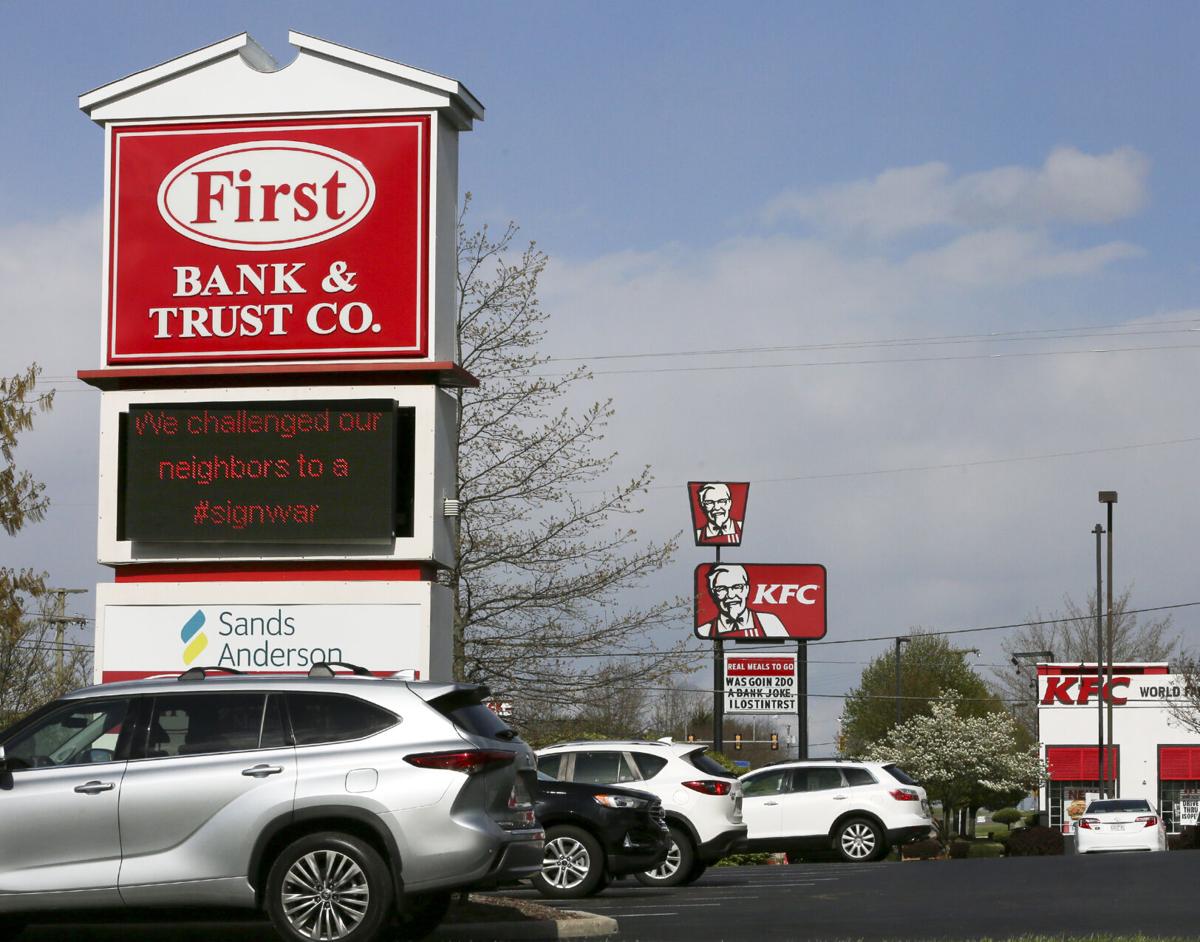 Christiansburg retail neighbors First Bank & Trust Co. and Kentucky Fried Chicken poke fun at each other as part of the good-natured sign war. 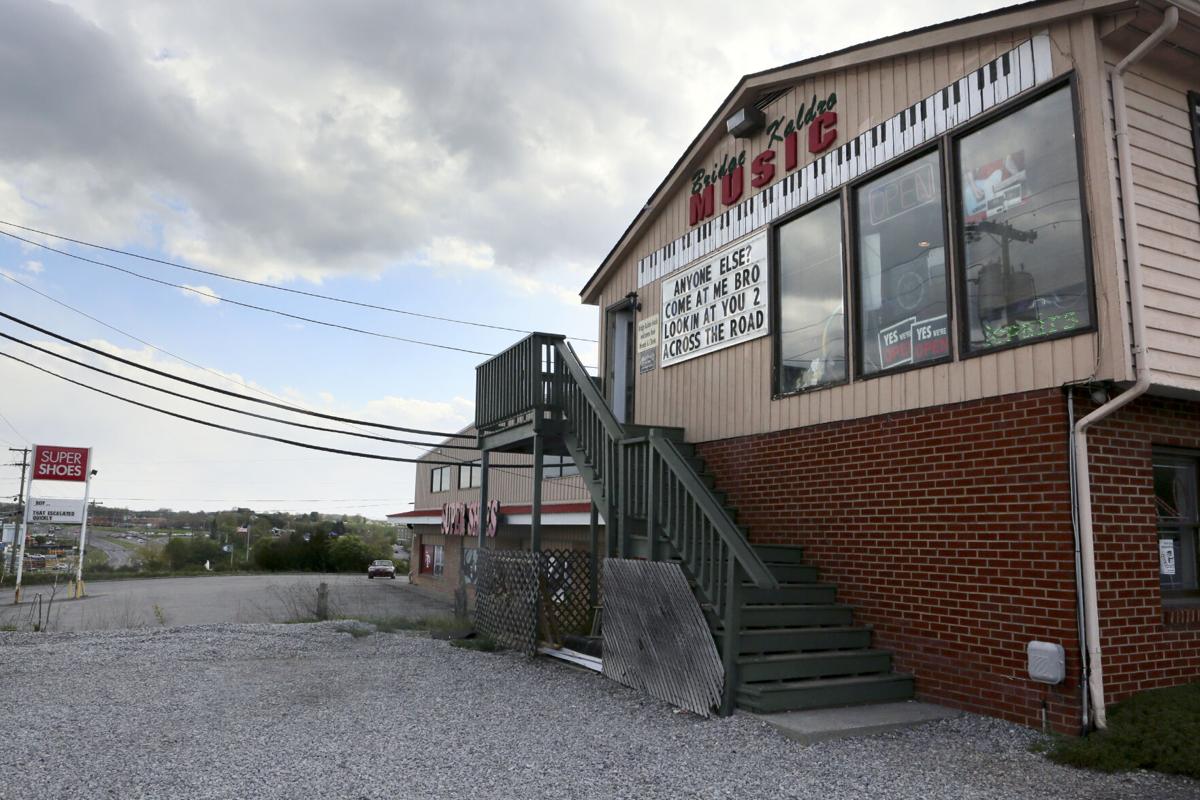 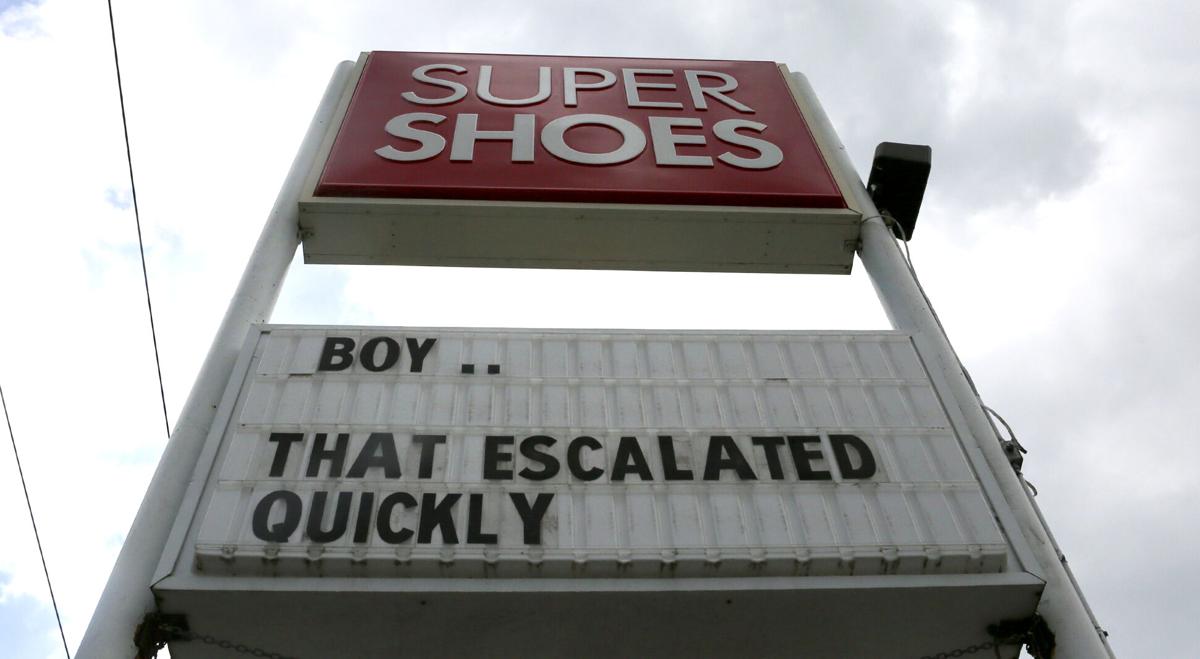 Super Shoes and Bridge Kaldro Music got into a sign war that quickly spread. 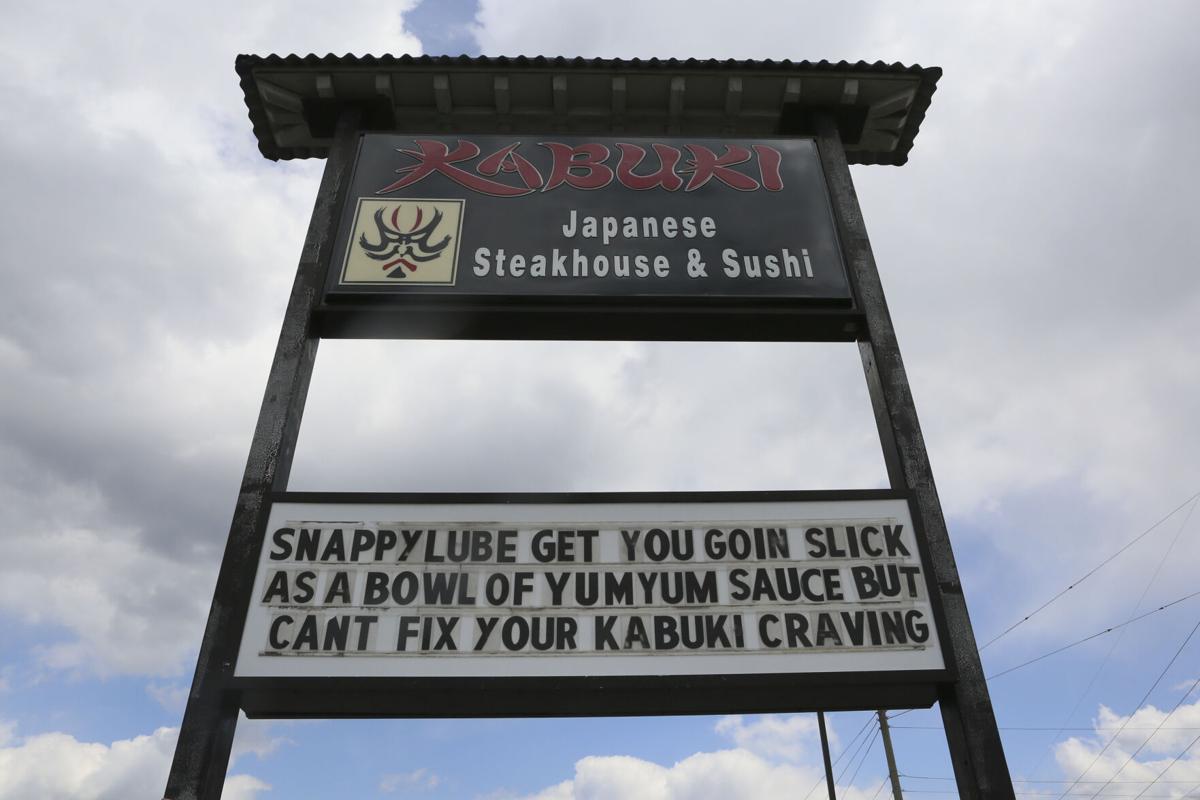 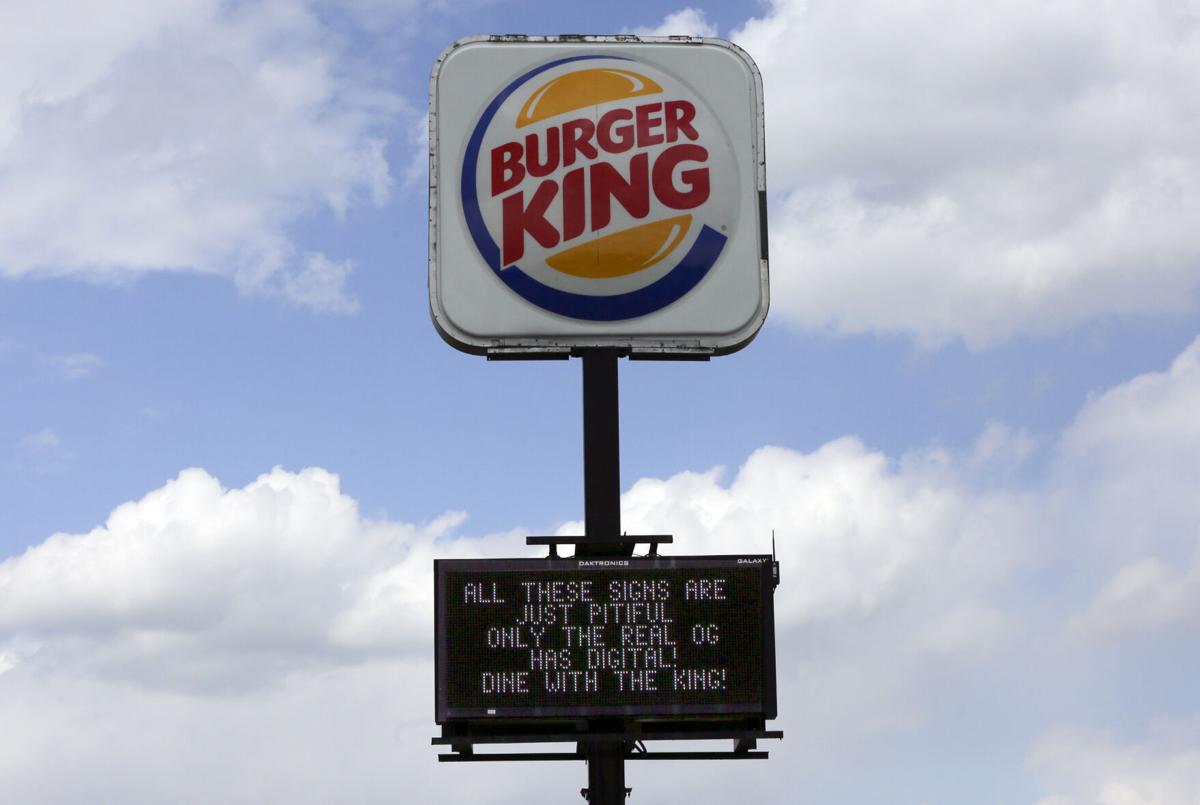 Burger King takes a sign war shot with their digital display in the Christiansburg retail neighborhood.

CHRISTIANSBURG — The last time war came to this small Southwest Virginia hamlet was April 5, 1865, when 4,000 Union troops under Gen. George B. Stoneman swept through the region intent on destroying the town’s railroad depot.

Now a new battle is raging here and even spilling into neighboring communities. This one is being fought with words. On signs. And means to spread goodwill.

“I was going 2do a bank joke,” KFC lobbed at its Peppers Ferry Road Neighbor, First Bank & Trust Co. But “I lost interest.”

It was Bridge Kaldro Music that that touched off this battle royale, challenging businesses to poke silly fun at one another. It has quickly spread across town and gone viral online.

Like a young British officer named George Washington, who fired on French troops and started the French and Indian War, music teacher Jim Bohon shot the first volley in Christiansburg.

Bohon has worked at Bridge Kaldro for about four years and has been in charge of the business marquee for a while now, he said. They’ve tried a lot of strategies, including posting music-themed haiku. But nothing has grabbed as much attention as this.

Bohon looked next door for his first target.

Bohon said the two businesses have a good relationship and help each other out with parking and other issues as needed. But the sign war wasn’t preplanned.

Bohon just went for it and waited to see what would happen. Nothing did, at first.

“Three or four days went by, and they hadn’t responded,” he said. “And I was wondering if maybe their corporate wouldn’t allow them to do it.”

But he needn’t have worried; boots were made for marching. Super Shoes gathered its ammo and shot back.

“Hey Bridge Kaldro! Our shoe strings are stronger than your guitar strings.”

Then Kabuki Restaurant threw down its gauntlet.

“You got to B-sharp to make good Shoe-shi and we won’t string you along.”

“What a ‘Croc’ IDK what stinks worse your shoes or Kabuki’s sign.”

The charged rhetoric raced down Franklin Street deep into the downtown where Christiansburg Pharmacy met the challenge.

“Music, shoes and food are fine. But your health is on our mind!”

The pharmacy rents out its marquee for personal greetings, from birthday recognitions to anniversary celebrations, so operations manager Michael Quinones is a part-time warrior.

“I only have like, one day a week that I can put something up on there,” he said. “So we’ll have one of something of this Sunday for the sign wars.”

“It’s been nice to see a lot of people enjoy it,” he said. “Just with COVID going on, it’s kind of given them something else to focus on.”

The phenomenon has been shared across social media and on April 16 spawned its own Facebook page: Christiansburg, VA Sign War. There delighted residents share snapshots of the faux fracas, tracking it as it marches through the area.

Six days after the page went live, the group had gained 10,000 members, some from as far away as Australia, administrator Anthony Woodyard said.

“I think right now people are looking for some fun and lightheartedness in the world,” the grief counselor said. “Just helping to give our businesses and the community a platform for some exposure in a time when they really can use it … has been really rewarding.”

In recent days, even mild-mannered dentists have joined the ranks. Real Life Dental deployed special forces (a sidewalk sandwich board) in the growing conflict: “Hey Bridge Kaldro no hard FILLINGS but we will be the CROWNED winner of this SIGN WAR.”

The skirmishes have even spread to Shawsville, where the Meadowbrook Public Library chimed in: “We tried to find time to join the Cburg sign war but we are fully booked.”

Not everyone is fighting. Blessed are the peacemakers at First Church of God, who remind us that “Pianos need tuned/Mikado costs $$/shoes wear out/Jesus is forever, honey.”

This fall will bring changes to all schools in Radford. Each school will have new leadership starting in July due to retirements and administr…

Two Tazewell County men were accused of coming to the Christiansburg Walmart to steal robot vacuums.

Jim Bohon, a music instructor with Bridge Kaldro Music, is having fun poking fun at the store’s Christiansburg retail neighborhood.

Christiansburg retail neighbors First Bank & Trust Co. and Kentucky Fried Chicken poke fun at each other as part of the good-natured sign war.

Super Shoes and Bridge Kaldro Music got into a sign war that quickly spread.

Burger King takes a sign war shot with their digital display in the Christiansburg retail neighborhood.