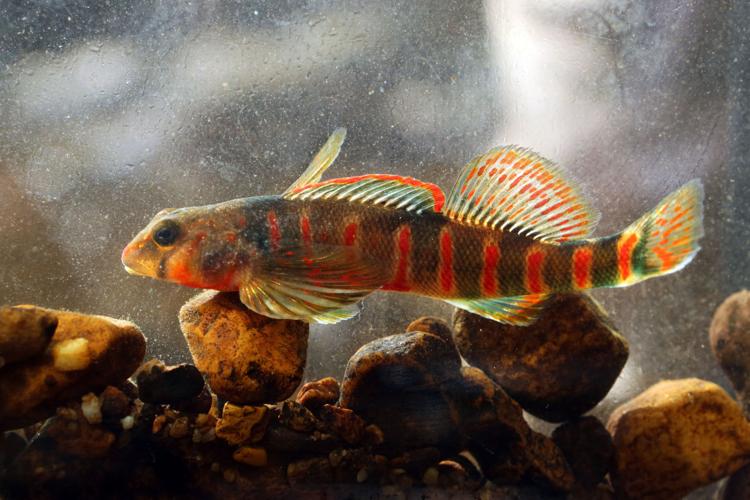 In a new legal challenge, a coalition of environmental groups says that the candy darter, pictured, and the Roanoke logperch could be pushed closer to extinction if Mountain Valley Pipeline is allowed to continue construction through Southwest Virginia.

The Roanoke logperch is a small fish that has been listed on the federal endangered species list.

Concerns about the fate of two endangered fish — the Roanoke logperch and the candy darter — have prompted a federal appeals court to throw out another permit for the embattled Mountain Valley Pipeline.

In a written opinion Thursday, the 4th U.S. Circuit Court of Appeals found “serious errors” with a government agency’s conclusion that building a massive natural gas pipeline across rugged mountainsides would not jeopardize the endangered species in its path.

The three-judge panel’s rejection of a biological opinion from the U.S. Fish and Wildlife Service marked the latest obstacle to Mountain Valley’s plans to complete the long-delayed project by this summer.

Last week, the same three judges shot down a permit that would have allowed the pipeline to pass through the Jefferson National Forest.

In both cases, the judges faulted the U.S. Forest Service and the wildlife agency for failing to adequately assess the environmental impact of a 303-mile long pipeline that bisects the New River and Roanoke valleys.

The Roanoke logperch and the candy darter are protected by the Endangered Species Act, which requires the government to give top priority to preventing their extinction when considering projects that pass through their habitats, as the pipeline does.

That means agencies may not take steps that would further jeopardize a species already determined to be in trouble, Judge James Wynn wrote in the unanimous decision.

“Put differently, if a species is already speeding toward the extinction cliff, an agency may not press on the gas,” Wynn wrote.

“We recognize that this decision will further delay the completion of an already mostly finished pipeline, but the Endangered Species Act’s directive to federal agencies could not be clearer: halt and reverse the trend toward species extinction, whatever the cost,” the 40-page opinion concluded.

Mountain Valley said it is reviewing the court’s decision and evaluating its next steps.

“We remain committed to completing the MVP project and believe the concerns associated with MVP’s Biological Opinion can be addressed by the agency,” the joint venture of five energy companies building the pipeline said in a statement.

However, opponents hope the two most recent decisions — on top of previous setbacks for the deeply controversial pipeline — may finally push investors to abandon the $6.2 billion project.

“The previous administration’s rushed, shoddy permitting put the entire project in question,” Kelly Sheehan, director of energy campaigns for the Sierra Club, said in a written statement. The Sierra Club is one of about a dozen national, regional and local environmental groups that have challenged Mountain Valley’s permits at every turn.

Sheehan said a reconsideration by the Biden administration will show “the science is clear: MVP is not compatible with a healthy planet and livable communities. MVP must not move forward.”

When muddy runoff from construction sites flows into streams and rivers, it can be especially harmful to the Roanoke logperch and the candy darter. The bottom-dwelling fish use their snouts to flip pebbles over in search of insects to feed on.

Silt from construction can coat the river bottoms, interfere with the fish’s ability to see and cause long-term problems with egg and larval development.

In its biological opinion, the Fish and Wildlife Service found that Mountain Valley would “adversely affect” five endangered or threatened species, but was unlikely to jeopardize any of them.

The Virginia spiraea shrub, the Indiana bat and the northern long-eared bat were also included in the opinion. But the Fourth Circuit found enough problems with the agency’s analysis of the habitats of the two fish to justify rejecting the permit.

Among other things, Wynn questioned the government’s assumption that studies covering a broad area should apply to the smaller, “action area” where the pipeline is proposed.

“That is pure speculation; it is like saying the economic conditions in Kansas are the same as those within the United States as a whole because the former is located within the later.”

The service also gave short shrift to the effects of climate change in its evaluation of how the endangered species would be affected, the Fourth Circuit ruled.

A spokesperson for the Fish and Wildlife Service could not be reached Thursday.

The service’s initial biological opinion was issued in 2017, the year before pipeline construction began. The following year, a professor in Virginia Tech’s Department of Fish and Wildlife Conservation, Paul Angermeier, contacted the service about his concerns that negative impacts on the Roanoke logperch had been overlooked.

New concerns also began to surface about the candy darter, a small, rainbow-colored fish that was added to the list of endangered species in 2018.

After a stay of the permit was issued, the Fish and Wildlife Service conducted more research before releasing a second biological opinion in September 2020. It was a challenge of that opinion that led to Thursday’s ruling by the Fourth Circuit.

Last week, the appellate court sent back to the drawing board a permit from the U.S. Forest Service that would have allowed the pipeline to pass through 3.5 miles of the Jefferson National Forest in Giles and Montgomery counties.

The Appalachian Trail runs through the section of public woodlands, which also includes a small piece of Monroe County, West Virginia. Mountain Valley plans to bury the pipeline about 80 feet beneath the trail.

In rejecting that permit, the Fourth Circuit ruled that the Forest Service failed to adequately take into account the amount of sediment that would be dislodged by installing a 42-inch diameter pipe along steep slopes.

Judge Stephanie Thacker wrote that the Forest Service improperly relied on a water quality analysis from Mountain Valley, while failing to consider data from U.S. Geological Survey monitoring stations that showed an increase in sedimentation in the Roanoke River, about 15 miles away.

Joining Thacker and Wynn in both decisions was Chief Judge Roger Gregory.

Previously, the Fourth Circuit has set aside initial approvals from the Forest Service and the U.S. Fish and Wildlife Service. It has also twice found problems with permits from the U.S. Army Corps of Engineers that gave the pipeline permission to cross nearly 1,000 streams and wetlands.

Although the court has also ruled in Mountain Valley’s favor in some cases, its overall record has evoked a saying among pipeline opponents: “May the Fourth be with you.”

The company said it remains committed to finish the 303-mile natural gas pipeline.

For the second time, a federal appeals court has revoked a permit issued by the U.S. Forest Service.

In a new legal challenge, a coalition of environmental groups says that the candy darter, pictured, and the Roanoke logperch could be pushed closer to extinction if Mountain Valley Pipeline is allowed to continue construction through Southwest Virginia.

The Roanoke logperch is a small fish that has been listed on the federal endangered species list.