The Leatherwood Solar facility on Mountain Valley Road in Axton is capable of producing energy to power 3,600 homes, according to Appalachian Power. 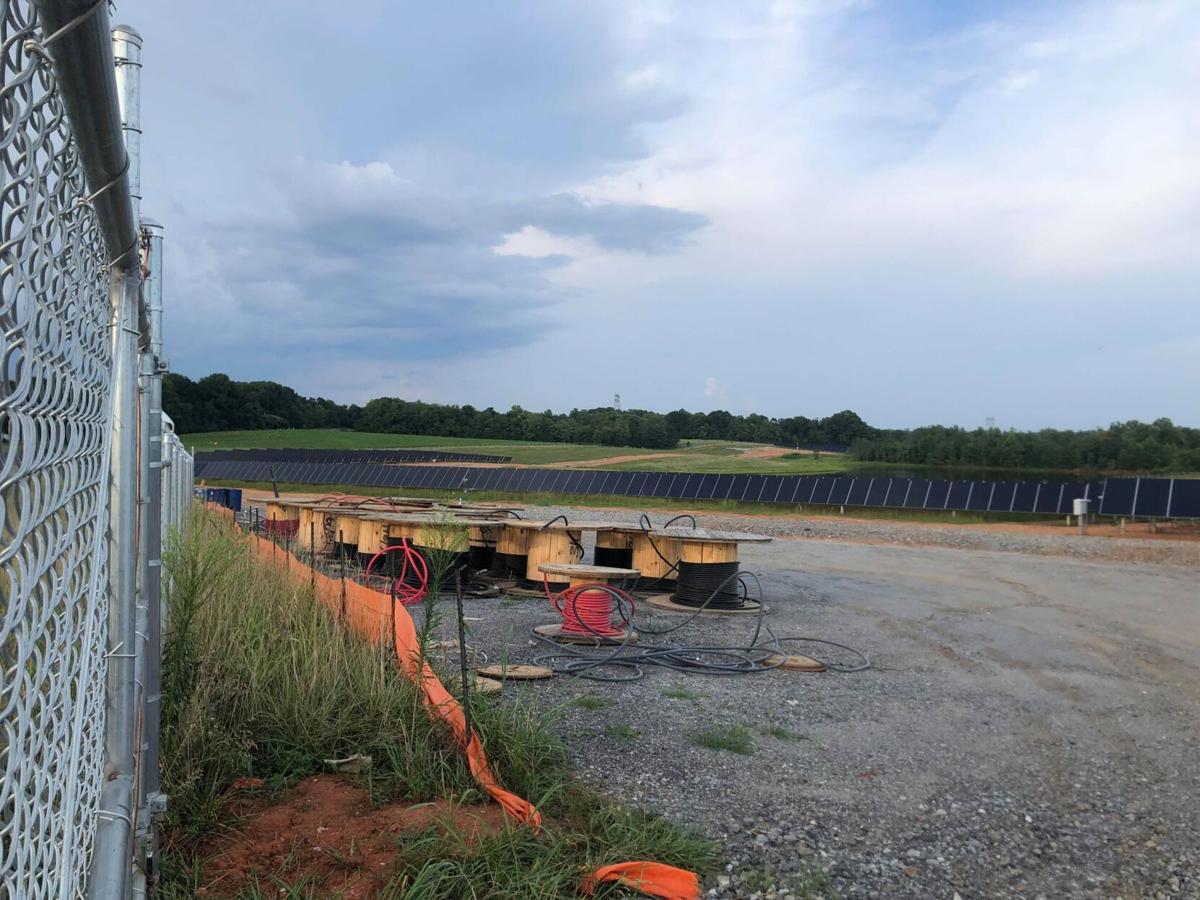 The Leatherwood Solar facility on Mountain Valley Road in Axton began supplying Appalachian Power with carbon-free energy in August, according to the utility company.

The sun is finally shining on the energy portfolio of Appalachian Power Co., which for years has relied predominantly on coal and natural gas.

In announcing its first utility-scale solar project to go online, Appalachian said Thursday that in August it began purchasing 20 megawatts of electricity — enough to power about 3,600 homes — from a solar farm in Henry County.

Two other power-purchase agreements with facilities nearing completion in Campbell and Wythe counties will add another 35 megawatts of solar to the generating capacity of Appalachian, which has about 524,000 customers in Western Virginia.

“Solar is a big part of our overall clean energy strategy,” Chris Beam, Appalachian’s president and chief operating officer, said in an announcement.

However, Appalachian currently gets about 80% of its electricity from coal- and natural gas-fired power plants, which it is being forced to replace with renewable energy by a state-mandated effort to ease climate change.

“It’s certainly better late than never,” Will Cleveland, a senior attorney with the Southern Environmental Law Center, said of the transition.

“We commend Appalachian for moving forward with its plans to add clean energy to its portfolio.”

Until recently, the utility’s only solar energy in Virginia came from panels on the rooftops and property of about 2,000 customers who chose to install them at their own expense. While cutting into individual electricity bills substantially, the panels’ total output was too small to register as a percentage of Appalachian’s power portfolio.

Once all three solar farms are up and running, possibly by the end of the year, solar will represent about 4.5% of the energy generated by Appalachian to serve its Virginia customers.

About 11% of that electricity comes from hydroelectric facilities — dams and pump-storage operations such as the one at Smith Mountain Lake — and another 7% from wind turbines in West Virginia, Illinois and Indiana.

The company’s first power-purchase agreement for solar became effective in August, when it connected with Leatherwood Solar, a project in Henry County developed by Energix Renewables.

Next will likely be the Depot Solar Center in Campbell County, a 100-some acre tract of solar panels that was first announced by Appalachian in 2017 but is only now nearing completion.

A third solar farm, in Wythe County, will generate 20 megawatts. It is also being developed by Energix, the company that more recently proposed a project at Smith Mountain Lake that was later withdrawn.

Appalachian has about 1 million customers in Virginia, West Virginia and Tennessee, and draws its power from sources in five states that are within the territory of its parent company, American Electric Power.

In the coming years, the utility will have to dramatically increase its reliance on solar, wind and hydroelectric sources.

The Virginia Clean Economy Act, a sweeping law passed last year by the General Assembly, requires Appalachian to get 100% of its electricity load for Virginia customers from renewable energy by 2050.

In a plan filed last year with the State Corporation Commission, the utility said it will acquire 210 megawatts of solar power and 200 megawatts of wind power over the next five years.

The plan, which will be updated later this year, also calls for ways to store renewable energy in battery systems and includes more energy efficiency measures.

Appalachian and Dominion Energy are also required under the new law to set a schedule for the closing of coal and natural gas plants in Virginia.

Although it no longer has any in-state coal plants, Appalachian currently draws the bulk of its power from facilities that burn the fuel in West Virginia. It plans to close its only Virginia natural gas facility, the 63-year-old Clinch River Plant in Russell County, which was converted from coal to gas several years ago.

Critics of the Clean Economy Act have warned that it will lead to increased rates for utility customers.

Bills are expected to go up by 3.5% over the next five years to cover the costs, Appalachian said in SCC filings, and will increase even more over time as the company switches to more renewable energy.

Already over the past year and a half, Appalachian has asked the SCC to allow it to raise rates for a variety of other reasons, such as the increasing costs of fuel and transmission expenses.

If all of the requests are approved, monthly bills for the average residential customer would grow by about $25.

The increase, proposed to cover the rising costs of coal and natural gas, would add another $3 to the monthly bill of the average residential customer.

Watch Now: A quick look at the Leatherwood Solar Facility in Henry County

The Virginia Clean Economy Act requires Appalachian and Dominion Energy to be totally carbon-free by 2025.

After long relying predominantly on coal and more recently natural gas, Appalachian is being pushed to pursue renewable energy by the Virginia Clean Economy Act, a sweeping law that requires it to produce all carbon-free electricity to its state customers by 2050.

The Leatherwood Solar facility on Mountain Valley Road in Axton is capable of producing energy to power 3,600 homes, according to Appalachian Power.

The Leatherwood Solar facility on Mountain Valley Road in Axton began supplying Appalachian Power with carbon-free energy in August, according to the utility company.