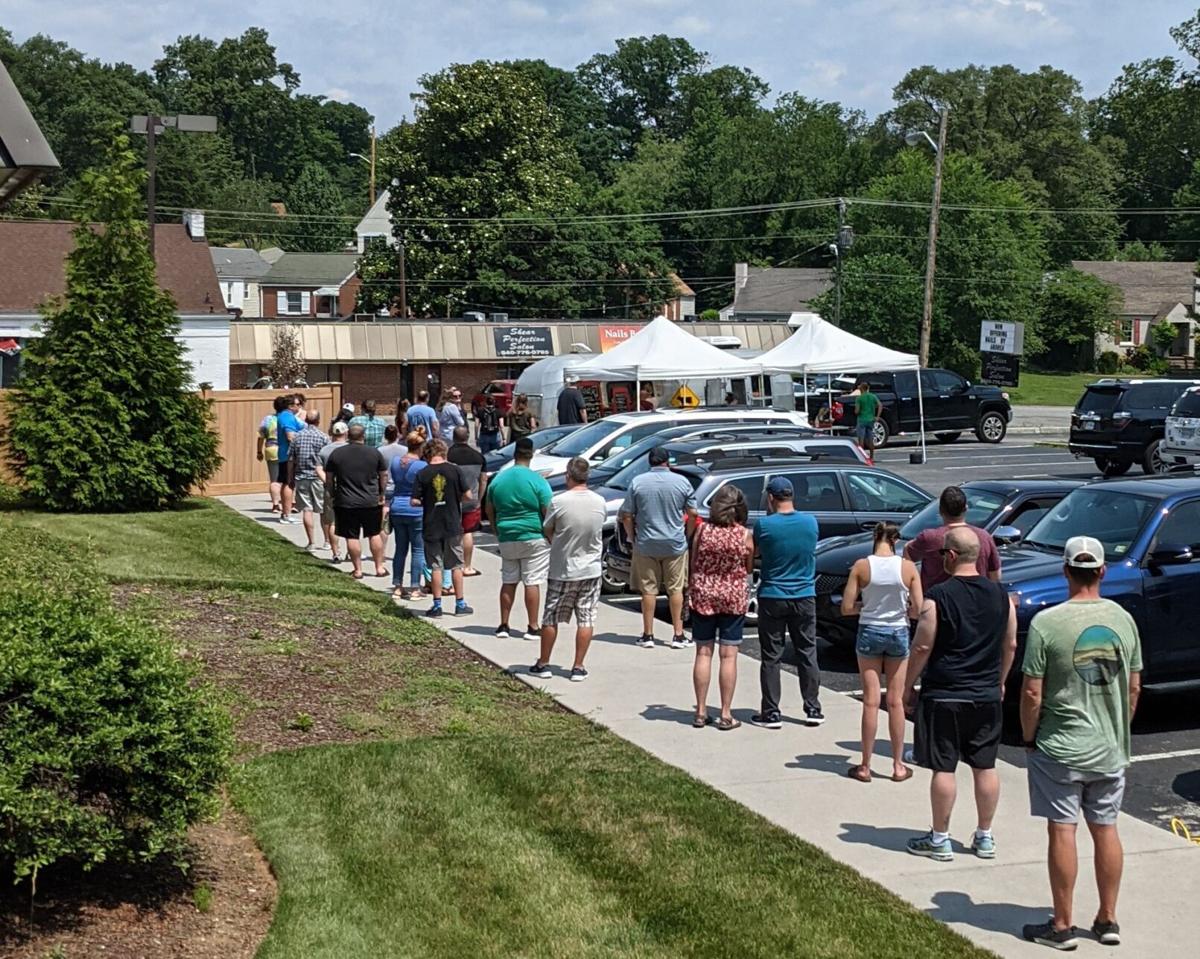 Customers lined up before noon Saturday for pork, beef, chicken and pastrami sausage from Mama Jean’s Barbecue and Soulful Sides, a food truck-operation in a rented parking lot along Brambleton Avenue in southwest Roanoke, near the iconic Coffee Pot restaurant. 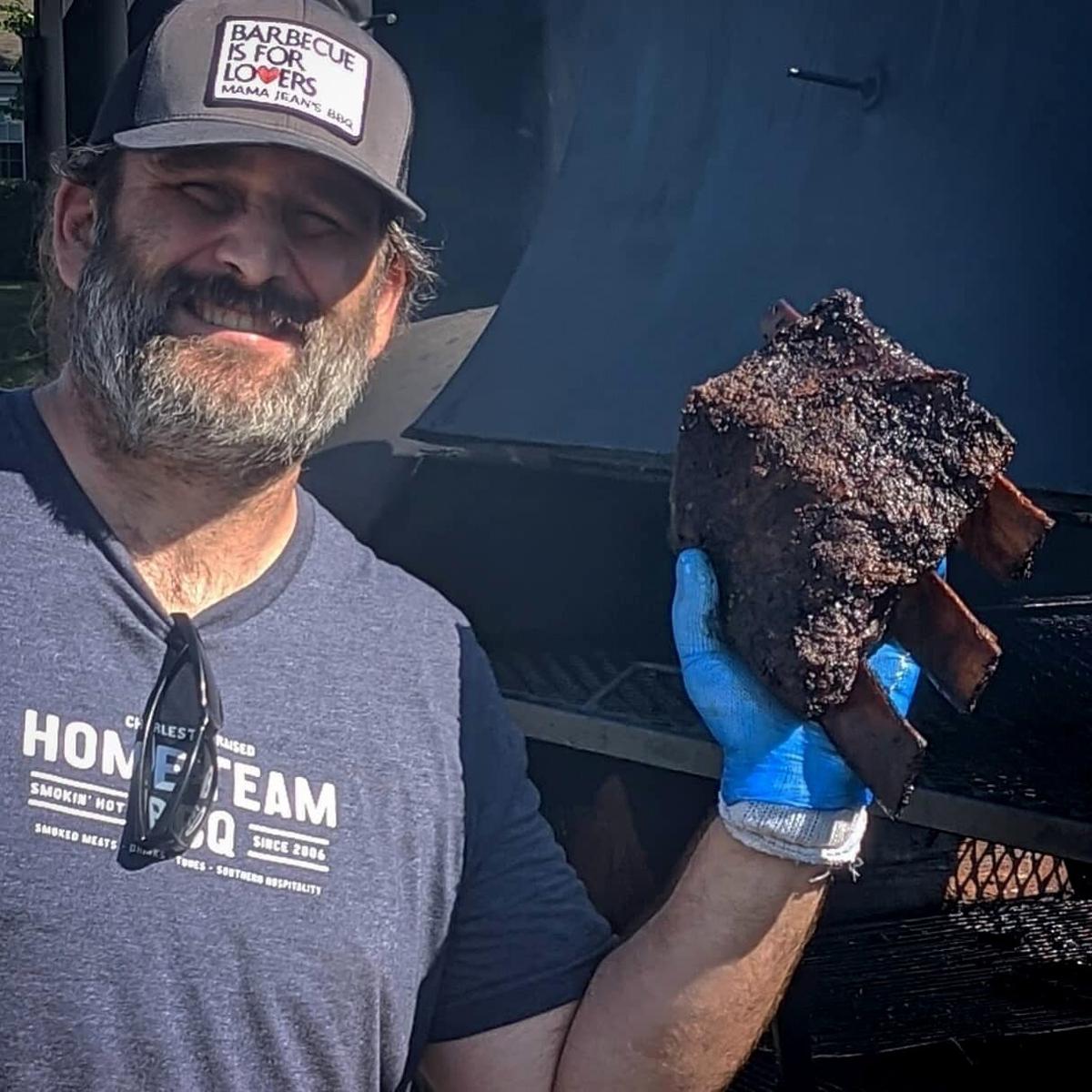 Madison Ruckel, 41, holds a rack of craft-smoked beef ribs from Mama Jean’s Barbecue and Soulful Sides, a food truck he owns and operates in a bank parking lot in Roanoke’s southwest quadrant. The Florida native’s been serving smoked meats and sides locally for three years, after learning the ins and outs of barbecue pit-mastering in Charleston, South Carolina. 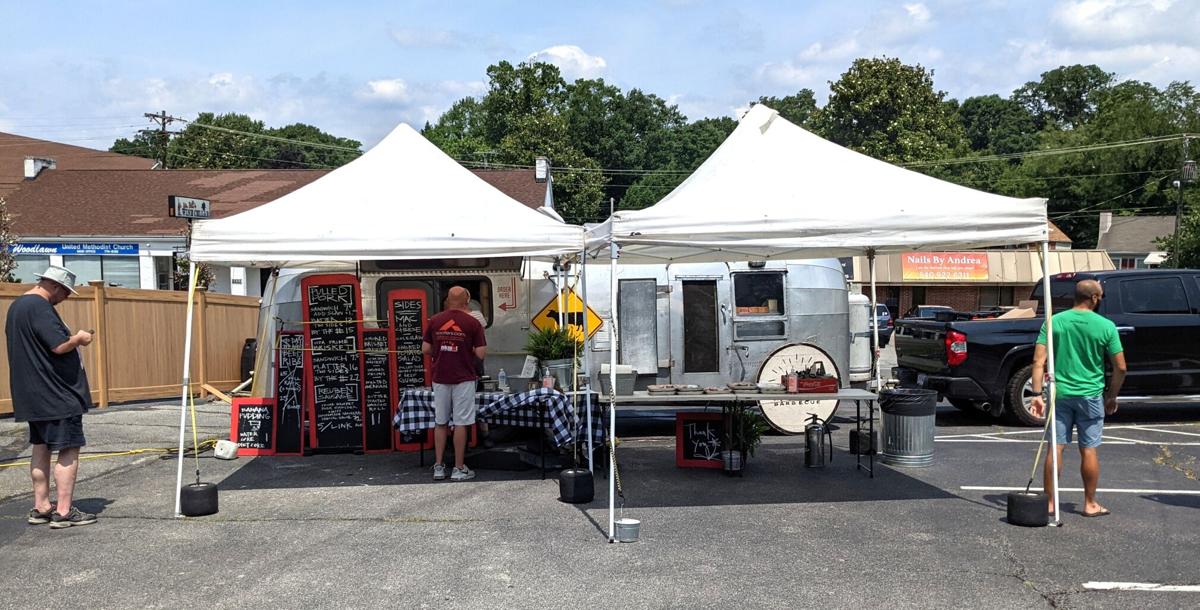 Owner Madison Ruckels trained for barbecue in restaurants in South Carolina. Then he bought a 1956 Airstream trailer once owned by a Hollywood film studio and opened up Mama Jean’s Barbecue and Soulful Sides. For the past two and half years, he’s been selling his food from a parking lot off Brambleton Avenue that’s adjacent to HomeTrust Bank. 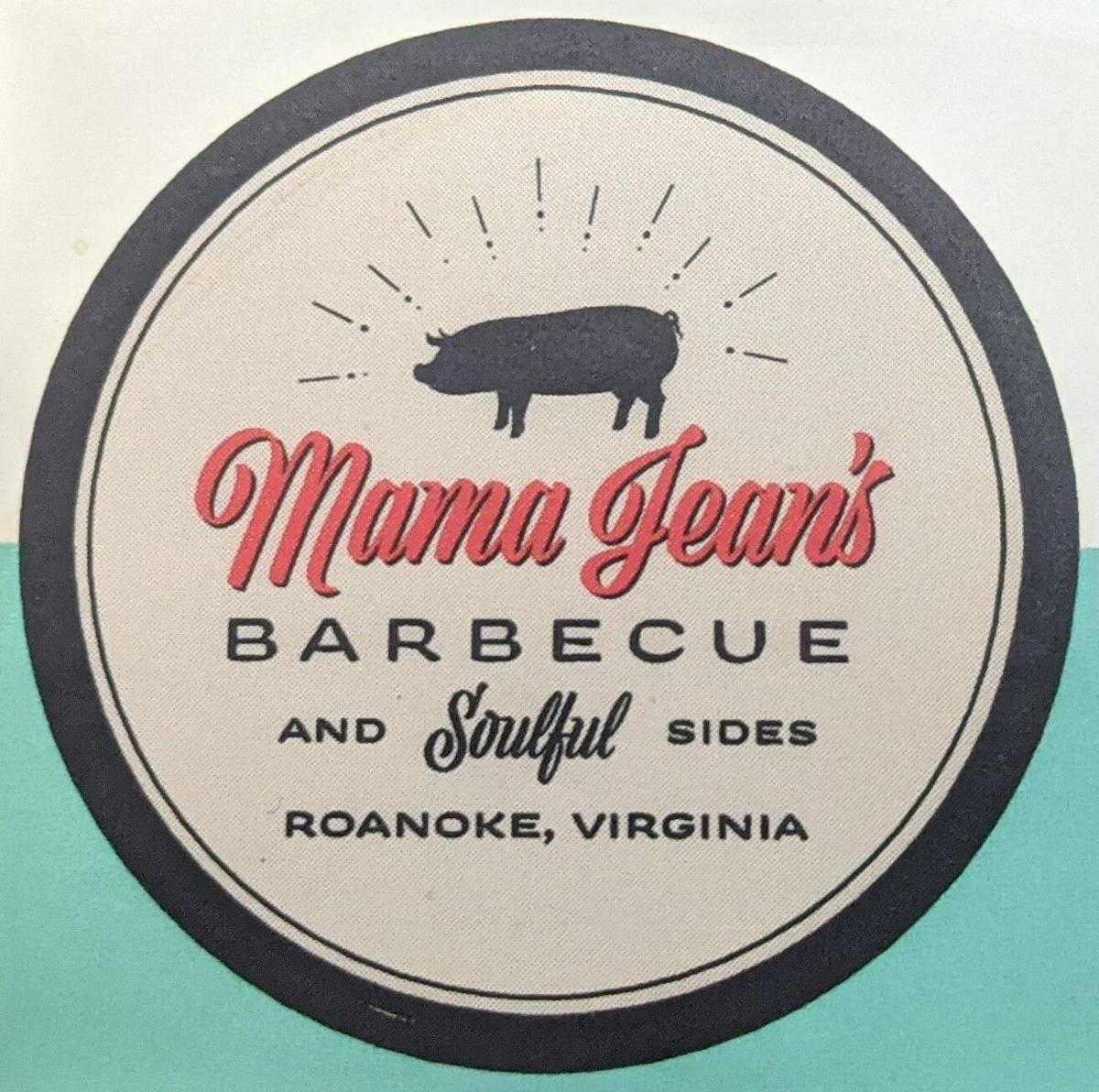 The line of people standing just off Brambleton Avenue formed quietly Saturday morning. By noon, it stretched almost all the way to Sweetbrier Avenue Southwest. That’s the road running behind both the parking lot at HomeTrust Bank, and its iconic neighbor, The Coffee Pot restaurant and nightspot.

Nobody in the queue had deposits or withdrawals on their minds, however. The collective goal was beef brisket, pulled pork, ribs, smoked burgers and homemade sausage — from Mama Jean’s Barbecue and Soulful Sides.

The customers waited patiently, their mouths watering, as a breeze treated them to errant puffs of smoldering oak and hickory emitted by a black-drum smoker on wheels. It stood next an old Airstream trailer purchased on eBay.

Owner Madison Ruckel, 41, who grew up in a small beach town along Florida’s Gulf Coast, told me he goes through a dump-truck load of seasoned wood each month, cut, split and delivered by a Floyd County farmer.

Mama Jean’s is one of the more recent additions to the food-truck scene here in the Noke, and it may be one of the few mobile operations that’s attracting crowds.

A colleague told me her boyfriend stood outside the bank for an hour one day get a Mama Jean’s meal. And judging by Saturday, he’s hardly the only one willing to wait.

“That’s normal for us, not for everyone else, I suppose,” Ruckels told me

What’s the story behind Mama Jean’s? And how did it end up commandeering more than half the parking lot of a bank? Those questions and more have been on my mind for a while. Saturday seemed like a good time to begin answering them.

First, I learned, HomeTrust Bank doesn’t own a large chunk of its own parking lot. Rather, the landlord for that ground is an accounting practice that resides in a small house next to the lot. Mike Morris and his son, Matt Morris, have a tax preparation business there.

The Morrises bought the adjacent acre, including a large part of bank’s parking lot, from the developer who originally built the bank building, which dates to before 1994. Several different institutions including Bank of America have operated branches there over the years. HomeTrust was already established when the Morrises picked up the plot.

The previous owner had been renting it to HomeTrust for $200 per month, Matt Morris said. After he and his dad bought it, “we went to the bank, told them the rent was going up, and the bank had no interest in it,” he added.

Soon, produce man Coy Cooper rented the location. Another barbecue food truck, Balm’s, which for a while was set up across Brambleton, quit showing up in the area. Ruckel said he learned of the potential there from a friend whose sister’s ex-husband had some kind of connection to the property.

Anyway, that’s what led him to the Morrises about two and a half years ago. After he inked a lease on the property, Mama Jean’s set up. Last summer, Cooper moved his produce stand less than half-a-mile west on Brambleton to an unimproved lot. (He sells delicious, fairly priced tomatoes, by the way.)

Now it’s just Mama Jean’s and half-a-dozen picnic tables in the grass — plus an odd-looking wall that separates the bank’s property from the barbecue joint’s. The 23-foot Airstream, the smoker, a couple of utility tables and some sun tents come and go from the site with Ruckel.

Only the wall and the picnic tables remain when Mama Jean’s isn’t there selling craft smoked meat.

Ruckel said he has three employees and grossed $350,000 last year. “This year we’re going to do half a million,” he said.

So who is Mama Jean?

“That was my mother,” Jean Parker Ruckel, he said a bit wistfully. “She passed away in 2010 from brain cancer. She was my inspiration. She taught me how to be a human and treat people right.”

The Floridian took a circuitous path to the Roanoke Valley. After high school, he ended up in Charleston, South Carolina, where he studied the culinary arts at Johnson & Wales University. After college, he started working for a company called Home Team BBQ.

It was founded in a shuttered gas station in 2006 by chef Aaron Siegel, aka “Fiery Ron.” Home Team BBQ now has five locations in South Carolina and one in tony Aspen, Colorado. StarChefs.com considers Siegel a “rising star” in the barbecue industry.

Ruckel told me he worked his way up to partner at Home Team BBQ. During those years, Charleston developed into a barbecue hotspot, attracting some big names in the industry. When Home Team BBQ “got really corporate,” Ruckels began casting about for a place he could call his own.

“I could have opened up in Charleston,” Ruckel noted. “But I would have been up against some of the best barbecue guys in the country.”

As he and his wife, Kelli, considered locations they initially looked at Boone, North Carolina. But its elevation — more than 3,000 feet above sea level — made Boone less than ideal, he said.

Above 2,000 feet, the higher you get “food cooks differently,” Ruckel said. They ended up choosing the Roanoke Valley (elevation 800 feet) partly because it’s lower, and partly because Kelli grew up in Salem. With two children in tow (a boy and a girl who are now 9 and 6, respectively) the couple moved into a basement apartment in her parents’ house.

They paid $42,000 for the 1956 Airstream trailer. It had already been converted into a food truck by its previous owner in Kansas City, who had bought it from a Hollywood film studio. Only the Lord knows which stars used that as a on-location changing room or respite, eh?

According to its website, Mama Jean’s sells a pulled-pork sandwich for $6.50. Smoked pulled-pork goes for $12 a pound (a platter including two sides cost $10.). Smoked beef brisket goes for $18.50 per pound.

He’s usually at the Brambleton location Wednesdays, Thursdays, Saturdays and Sundays, and outside Olde Salem Brewing Co. on Fridays. They’re open until whenever Mam Jean’s sells out.

“Everything we sell, we make from scratch, fresh that day,” he said. “Our thing is, make enough, sell out and then go home and be with our kids.”

Prices have been edging up lately, Ruckel noted. In case you haven’t noticed, the cost of meat is sky-high these days. Three months ago, Ruckel was paying 99 cents a pound for pork butts; nowadays it costs $2.29.

He doesn’t plan to be in the food-truck business forever, calling his current setup “a stepping stone.” Right now he has his eyes on a couple of potential future restaurant locations.

One of these days, Ruckel added, he’ll have a brick-and-mortar barbecue joint, with a dining room, outdoor seating and perhaps a venue for live music. And after that, who knows? Maybe this is the beginning of a food-service empire.

“It’ll take me about five to 10 years, then we’ll be set,” Ruckel said confidently. “Roanoke is ready.”

Runways lit up with LED at Roanoke-Blacksburg Regional Airport

There’s a new sight visible from the Mill Mountain Star overlook. No, not the moon growing bigger and brighter toward fullness next week. It’s…

Customers lined up before noon Saturday for pork, beef, chicken and pastrami sausage from Mama Jean’s Barbecue and Soulful Sides, a food truck-operation in a rented parking lot along Brambleton Avenue in southwest Roanoke, near the iconic Coffee Pot restaurant.

Madison Ruckel, 41, holds a rack of craft-smoked beef ribs from Mama Jean’s Barbecue and Soulful Sides, a food truck he owns and operates in a bank parking lot in Roanoke’s southwest quadrant. The Florida native’s been serving smoked meats and sides locally for three years, after learning the ins and outs of barbecue pit-mastering in Charleston, South Carolina.

Owner Madison Ruckels trained for barbecue in restaurants in South Carolina. Then he bought a 1956 Airstream trailer once owned by a Hollywood film studio and opened up Mama Jean’s Barbecue and Soulful Sides. For the past two and half years, he’s been selling his food from a parking lot off Brambleton Avenue that’s adjacent to HomeTrust Bank.