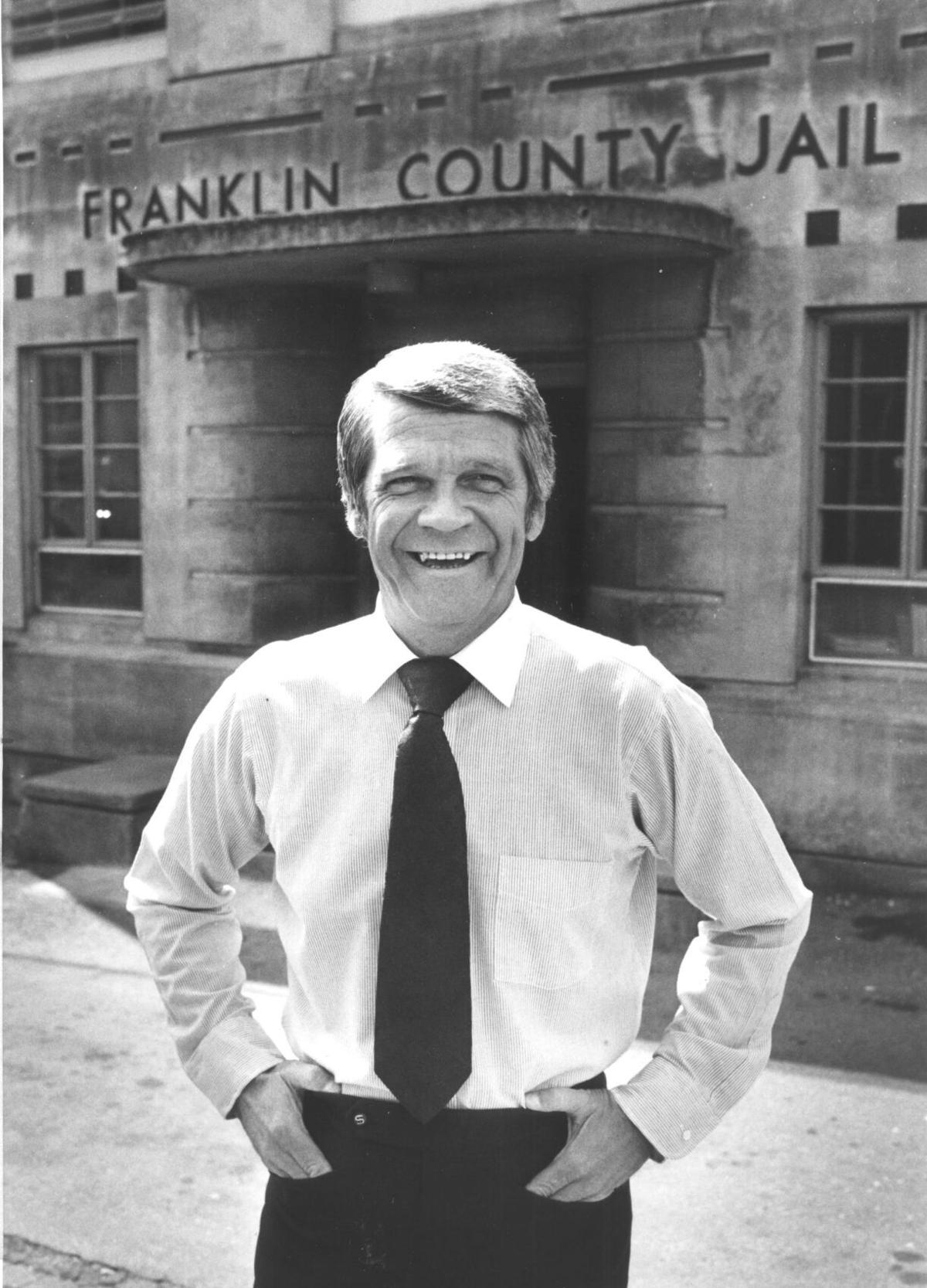 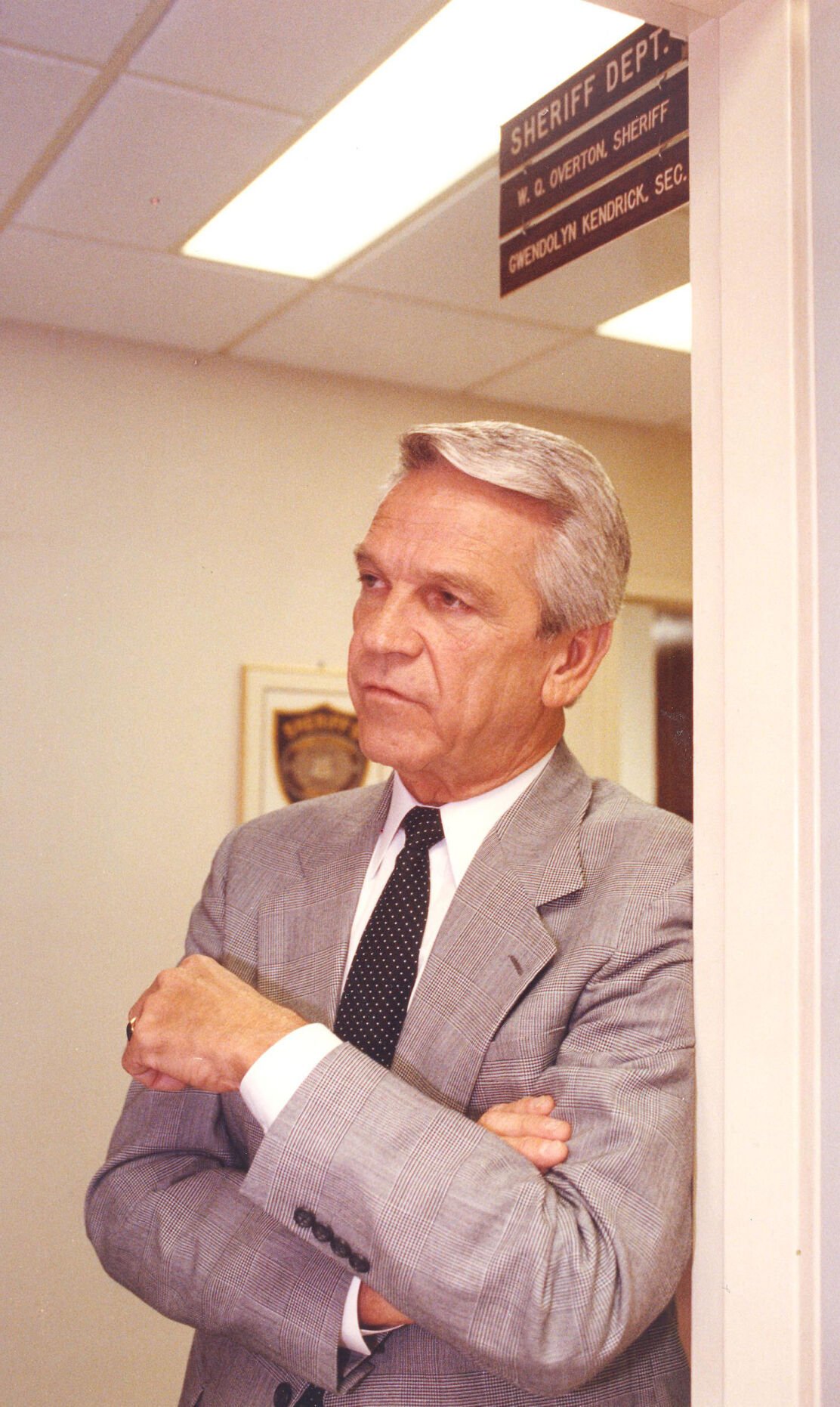 Sheriff Quint Overton stands in the doorway of the newly refurbished dispatching station at the Franklin County Sheriff's Department in 1992.

“He told me one time that that was the last thing that we could do for a taxpayer,” said Ronnie Thompson, chairman of the county Board of Supervisors.

Monday, when Franklin Heights Church in Rocky Mount holds Overton’s funeral, the county will come out to honor him.

William Quinton Overton Sr.,  the longest-serving sheriff in Franklin County and one of the most popular politicians the region has ever seen, died Tuesday at age 83. In 1987, running for his fourth term as sheriff, he received 81% of the vote in the three-way race. In 2003, fending off a challenger for what would be his final term in office, he thundered to victory with 82% of the vote.

“He was a true leader and a great public servant,” said his son and successor, Franklin County Sheriff Billy Overton.

“Sheriff Quint Overton is going to leave a legacy that is going to be hard to duplicate or beat,” said Thompson. Like many Franklin County officials past and present, Thompson was once Overton’s employee in the sheriff’s office.

Had diabetes and other health problems not taken their toll, “I think he could have been sheriff as long as he wanted,” Thompson said.

“He was a true politician," said Billie Wayne Stockton, a member of the Rocky Mount Town Council who spent 26 years working for Overton, serving as his chief deputy. "And he was not just a politician on Election Day, but all the time."

Stockton said Overton had a concern for everyone — his employees, members of the public, even the people he dealt with on the wrong side of the law — that was genuine in a way that some politicians are not.

When there was a funeral, Overton assigned three or four deputies to guide the procession. Many times, he attended in plain clothes. When residents complained about trash, he would send jail inmates to clean it up.

Tim Tatum, vice chairman of the county board of supervisors, who worked as a deputy and school resource officer for Overton for two decades, recalled that not only did Overton attend the funerals and assign escorts — he’d also assign a deputy to watch the grieving family’s house while they were out.

In the days before voicemail, Overton's desk was littered with pink phone messages from people with problems. Some could be solved by the sheriff's office; others could not. Overton returned every call.

"It may be penny ante to me, but it's serious to them," he said in a 1992 interview with The Roanoke Times. "People don't have anywhere else to turn. I talk to all of them. It's nerve-wracking, but that's what they pay me for."

Overton presided over a different era in Franklin County law enforcement. He had a ground floor office right next to a side entrance. Anyone could walk in and he’d give them a chance to speak their mind.

“You could go to his office anytime and there'd be people standing outside,” just ordinary folk, “standing outside waiting to talk to him,” said Linda Stanley, managing director of the Franklin County Historical Society.

Overton earned admiration from many quarters, and just about anyone who knew him has multiple stories to tell that reinforce his larger-than-life reputation.

Stanley recalled a redistricting controversy in which “people were getting rowdy” at a board of supervisors meeting. “They just kept getting rowdier and rowdier. Suddenly the door opens and here comes Sheriff Overton. He didn’t say a word. He stood in front of the stage, like Mr. Clean, with his legs spread apart. He just put his hands behind his back and just looked out over the crowd.” Overton never wore a uniform, often dressing in a checkered shirt and sport coat, nor did he ever display a weapon. The crowd fell silent nonetheless.

Overton’s care for his constituents went beyond savvy politics. The day after the 9/11 terrorist attacks, the sheriff’s office took a report from a family from India that lived in the county. An anonymous caller had demanded to know what country they came from.

Overton sent a deputy to keep a lookout for the night. Worried about the threat of racially motivated violence in the wake of the attacks, he spoke out to head it off.

"I know people are so upset," Overton said in a Roanoke Times interview. "As the time goes on, they become more angry. They want some retaliation now. You got to make sure that we hit the right target. They shouldn't take it out on people who are already here."

A Farmville native, Overton had a 48-year career in law enforcement, starting out in 1958 as a state trooper stationed in Franklin County. He served with the Virginia Department of Alcoholic Beverage Control for a year and half leading up to his first successful campaign for sheriff in 1975.

Overton grew frustrated with taking great physical risks as a law enforcement officer for cases that the courts treated as being of little consequence, deciding he could do more for law and order in the county if he ran for office, Stanley said.

“He always told me, ‘You do your job. You enforce the law. You leave the politics to me,’” Tatum said.

The law definitely mattered to Overton. In a particularly famous Franklin County clash, Franklin County Speedway owner and dyed-in-the-wool huckster Donald “Whitey” Taylor booked a performance from country outlaw Willie Nelson in 1980 for a festival billed as a blowout event that would attract 100,000 — but Nelson was a no-show after Overton vowed to arrest him if he drank alcohol on stage.

Yet Overton could apply the law in creative, compassionate ways. Stanley recalled an incident in which a county resident attempted suicide, and later received a hospital visit from Overton, who “arrested” him. “He went and talked to him and told him he shouldn’t be killing people, especially himself.” The man considered the visit a life-saving intervention, Stanley said.

County Circuit Judge William Alexander declared Overton’s retirement in 2007 at age 69 “the end of an institution,” adding “nobody could ask anybody to give any more than he has.”

Overton was preceded in death by his wife of 59 years, Ann Overton. He is survived by his two sons, Bill and David, and many grandchildren and great-grandchildren.

Overton’s funeral is Monday at 2 p.m. at Franklin Heights Church with interment to follow at Franklin Memorial Park. The family will receive friends Sunday from 3 p.m. to 6 p.m. at the church. Conner-Bowman Funeral Home is in charge of the arrangements.

Staff writers Laurence Hammack with The Roanoke Times and Steven Marsh with Franklin News-Post contributed to this report.

Sheriff Quint Overton stands in the doorway of the newly refurbished dispatching station at the Franklin County Sheriff's Department in 1992. 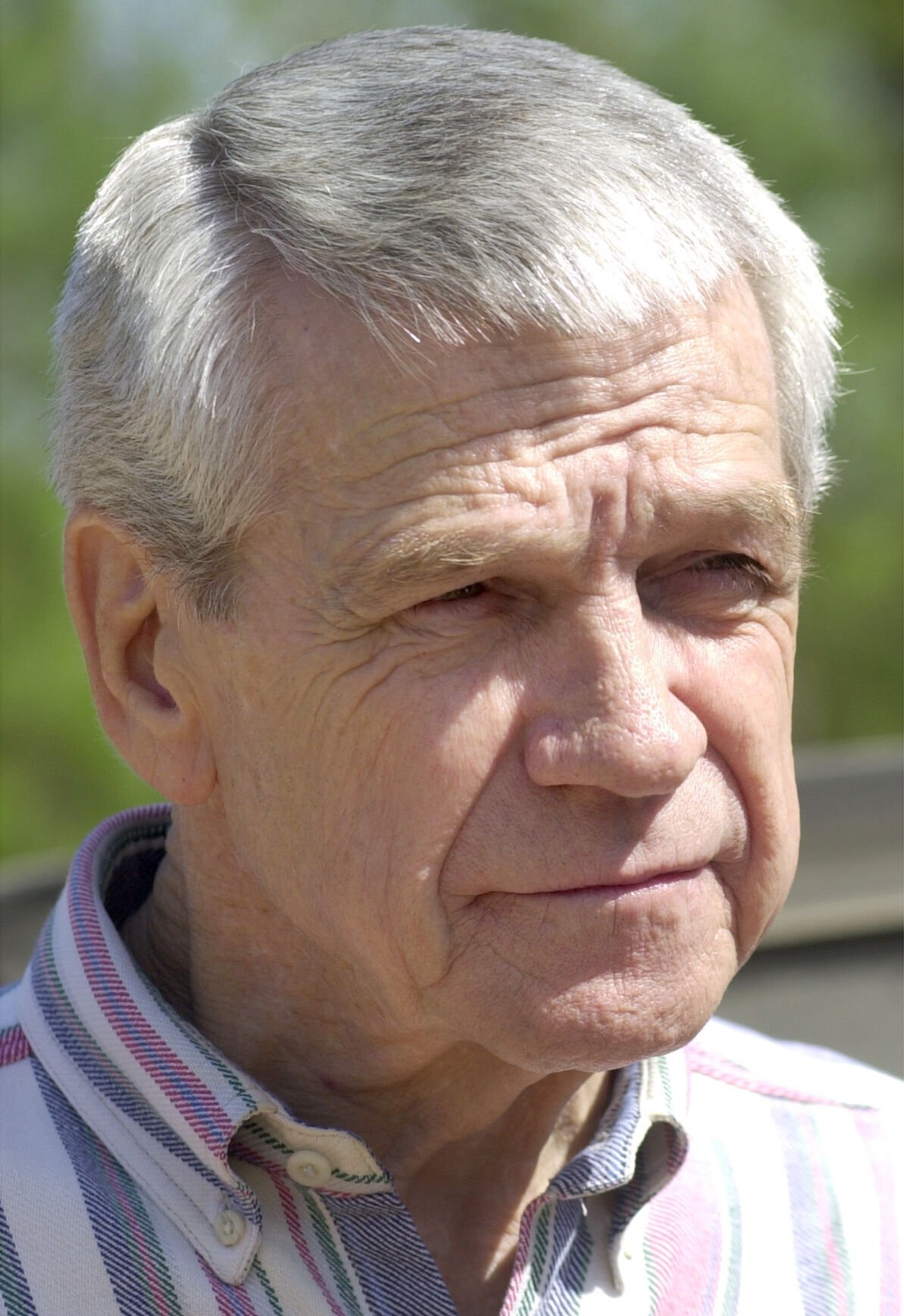