Adrian Cronauer, a disc jockey, actor and Pentagon adviser whose story as a radio host during the Vietnam War inspired the 1987 film “Good Morning, Vietnam,” helping make its star Robin Williams a household name, died Wednesday in Troutville. He was 79.

His death was confirmed by Jeff Hunt, a longtime Roanoke radio announcer who hired Cronauer at Roanoke FM station WPVR. He said Cronauer had been in a nursing home.

“Goooooooood morning Vietnam,” was the signature sign-on Cronauer used hosting “Dawn Buster” from 1965-6 in Saigon. Williams’ portrayal of the fictional Cronauer cemented the line in American culture, associating it with the host’s radio high jinks and irreverent view toward military hierarchy and censorship, and earning Williams an Academy Award nomination in 1987.

The line’s origins, as Cronauer recalled it, were more humble.

“That was something he did to buy him some time when he was running late in the morning,” said Pat Garrett, who worked with Cronauer at WVWR (now WVTF) in Roanoke. As the last record was playing, Cronauer would take up time setting up the next one by lengthening the “Good” until it became almost manic.

“If I were half as funny as Robin Williams, I’d be out in Hollywood going na-noo, na-noo and making a million dollars,” Cronauer told Urgent Communications magazine in 2005. “Once people get to know me, they realize very quickly that I’m not Robin Williams, and it doesn’t seem to bother them after that.”

It wasn’t until 1979, when Cronauer moved to New York, that he thought his time as a radio disc jockey in Vietnam could be the stuff of Hollywood. There, he subleased an apartment from Ben Moses, who he had hired for an on-air position at Armed Forces Radio in Vietnam. As Cronauer and Moses recounted their time during the war, Cronauer thought they had enough material for a sitcom. At the time, two of the most popular television shows were “MASH” and “WKRP in Cincinnati.”

After being passed among agents and producers, the story was rewritten as a TV movie and eventually made its way to Robin Williams’ agent. The final project bore little resemblance to Cronauer’s real Vietnam experiences.

“He was quite a character, and he was a local major personality after this thing with Good Morning, Vietnam,” said Larry Bly, a longtime Roanoke disc jockey, who met Cronauer in the early 1970s. “But he had been an important part of community as well.”

Cronauer acted in productions at Showtimers Community Theatre. While acting in Gore Vidal’s “The Best Man,” he met Jeane Steppe, a probation officer for juvenile and domestic relations district court who was volunteering in the wardrobe.

“I saw this cute blonde and said, ‘What’s your name, honey?’ “ Cronauer recalled in a 2010 interview with The Roanoke Times. “She flashed a badge at me and I almost never talked to her again.” The two married in 1980.

When Cronauer returned to Roanoke for the 50th anniversary of Showtimers, he was mobbed.

“There were lots and lots of people gathered around him, he was all the rage at the moment,” Bly said. They had all heard of “Good Morning, Vietnam.”

“I said, Adrian, I just have one question for you: did you get rich on this movie? And he said in his typical droll manner, ‘Well, no Larry I can’t say that I got rich. But I made enough money.’

Enough, in fact, to return to school. He studied media law at the University of Pennsylvania law school and found a second career as an attorney and a Pentagon advisor.

“I said to Adrian, I says, ‘You know the only difference between you and me is I was doing the same thing in Korea,’ ” Bly recalled. “It wasn’t as funny to say Good Morning, Korea.”

Adrian Joseph Cronauer was born Sept. 8, 1938, in Pittsburgh, where he began his career as an amateur radio host, at age 12.

He attended the University of Pittsburgh and American University before enlisting in the Air Force as a radio-television production specialist.

When he first joined the military, Cronauer broadcast to Iraklion Air Station in Crete, opening his program with the line, “Good Morning, Iraklion,” according to The Encyclopedia of the Vietnam War: A Political, Social, and Military History. When Cronauer moved to Saigon as a U.S. Air Force sergeant, he switched the opening to “Good Morning, Vietnam.”

After the military, Cronauer worked at a television station in Ohio before moving to Roanoke in 1967. He worked for WRFT-TV (Channel 27), a defunct ABC affiliate, in Salem, while also filling in on the radio.

“He had a radio voice — no question about that,” said Jon Boettcher, who was vice president of programming at WBRA-TV from 1967 to 2000. “When he was on the radio, if you were part of a group, he sounded like he was talking just to you.”

In 2001, he was asked to join the Bush administration, since they considered him a high-profile veteran, Cronauer recalled in a 2005 interview. He was thinking over the offer when 9/11 happened and he decided to go into government. He served as a confidential adviser to the Deputy Assistant Secretary of Defense from 2001 through 2009. While there, he represented the POW/MIA office at meetings with the Office of the Secretary of Defense.

He was also involved in many veterans organizations. Cronauer sat on the National D-Day Memorial board of directors and served two terms as a trustee of the Virginia War Memorial.

His former Roanoke radio co-workers were surprised to learn in later years that Cronauer claimed to be a card-carrying Republican.

“We were all a bunch of partyers in those days. Adrian was too responsible to party with us, but at the same time he never gave us hell for it,” Hunt said.

“I think I can speak for others that it was a surprise when he became so conservative and outspoken.”

Cronauer returned to the Roanoke Valley in 2009, when he and Jeane moved to Troutville. She preceded him in death, in 2016.

Toward the end of his life, Cronauer appeared to be at ease with how he would mostly be remembered for “Good Morning, Vietnam.”

Cronauer in the country

But after Vietnam, he settled in Roanoke, where he worked in radio and TV from 1967 to 1979. He moved away but came back to Botetourt County in 2009.

Read more about Cronauer's journey back to the Roanoke Valley in this 2010 Roanoke Times article: bit.ly/2muJucW.

Take a look back at 2018 and the most-read stories by Roanoke Times staff. 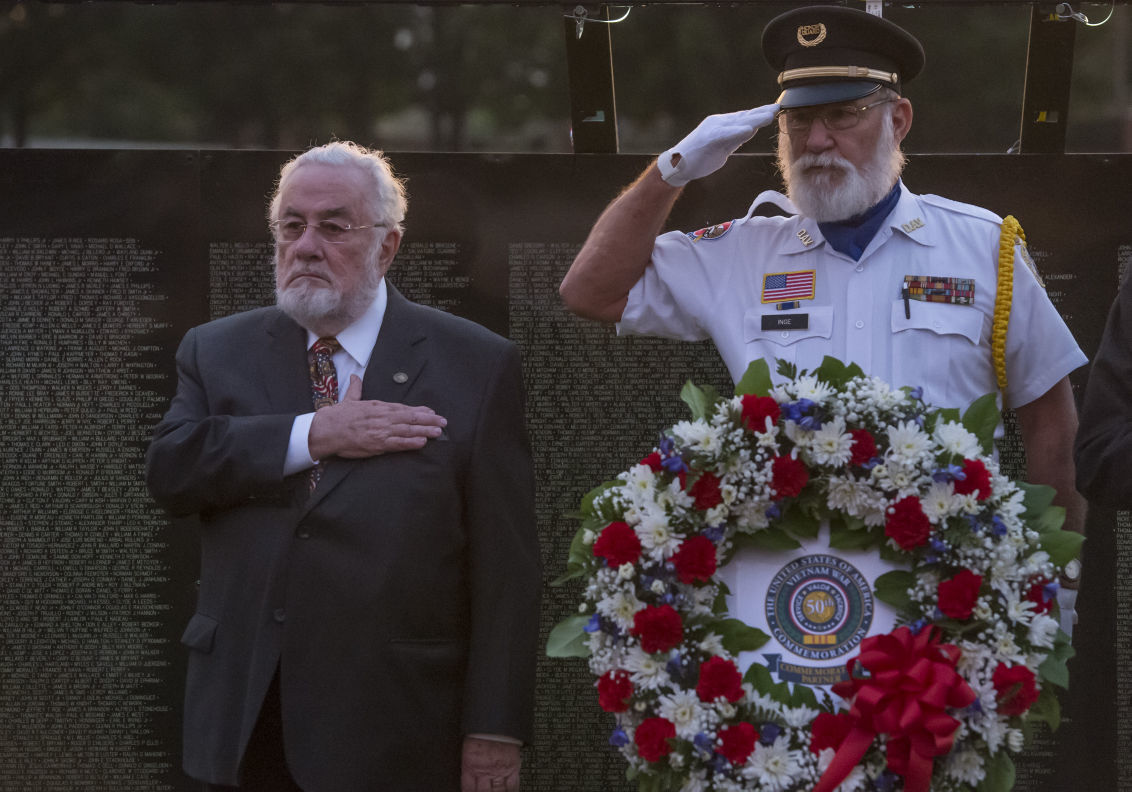 Keynote speaker Adrian Cronauer (left) and Vietnam Vet John Inge honor the memorial while taps is being played at The Wall That Heals, a 250-foot-long replica of the wall in Washington, D.C., at the Salem Veterans Affairs Medical Center for five days to honor those who made the ultimate sacrifice. About 100 names on the wall are from the Roanoke and New River Valleys. 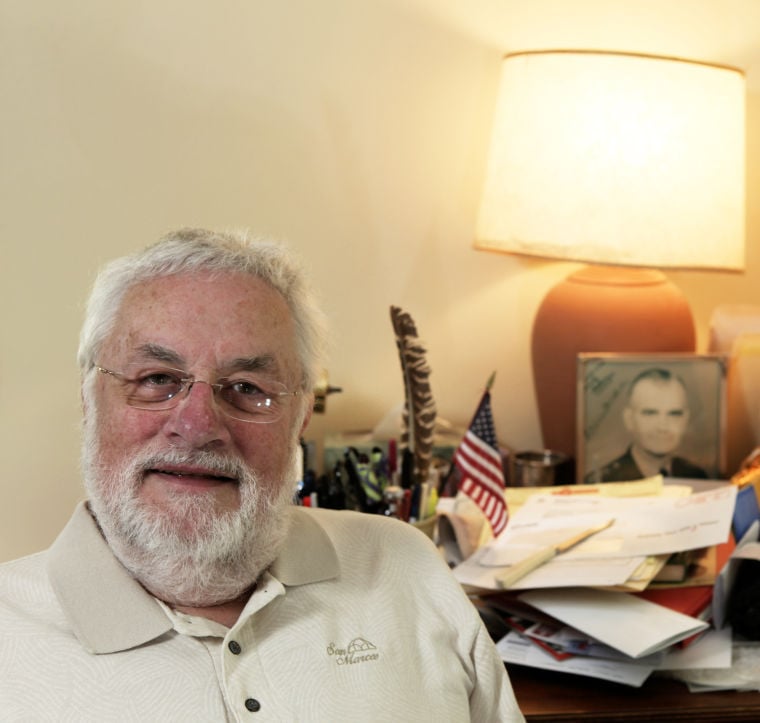 Adrian Cronauer moved to Troutville in 2009. He passed away July 18.