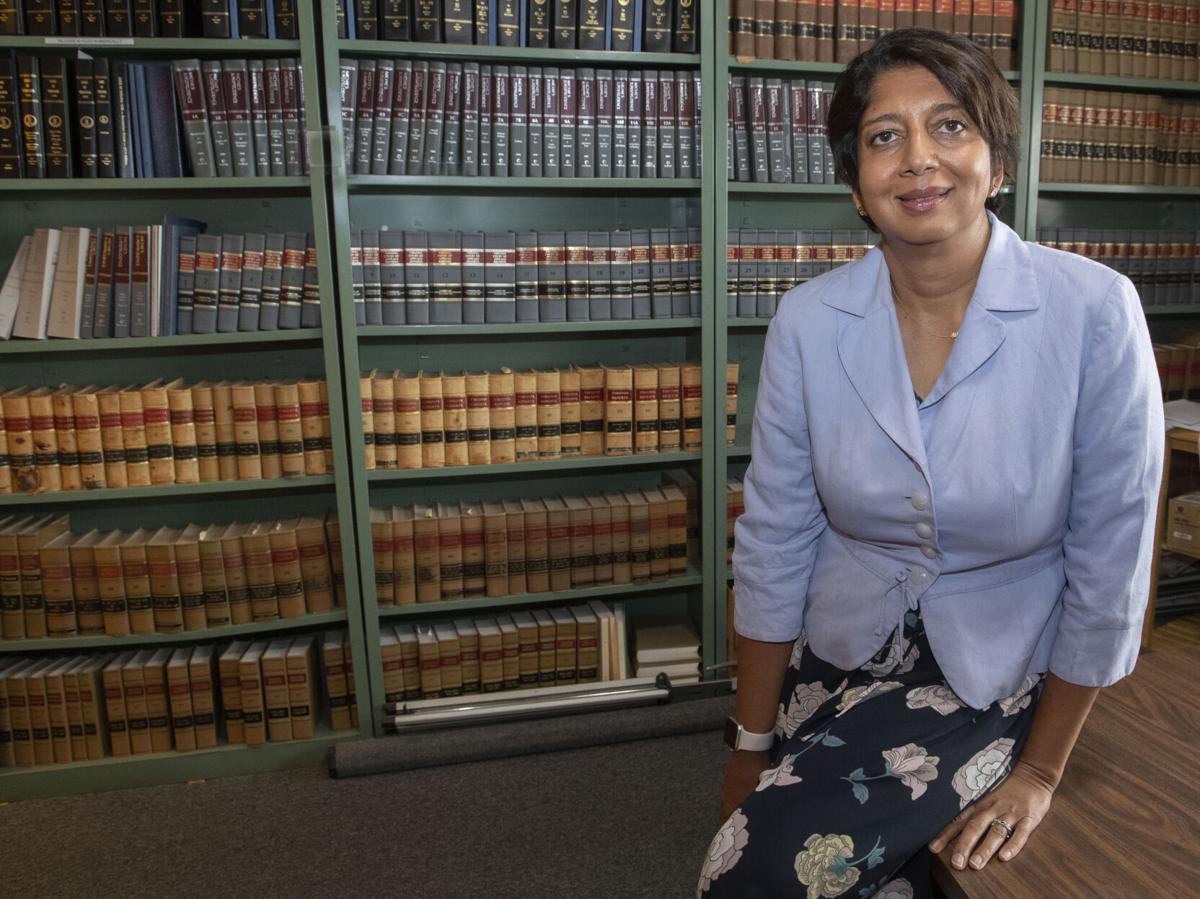 Legal aid attorney Mona Raza at her office in Downtown Roanoke: “A lot of landlords who have seen the benefits of the program are continuing to apply for their tenants. But there are people who are not. They would rather try to replace the tenant.” 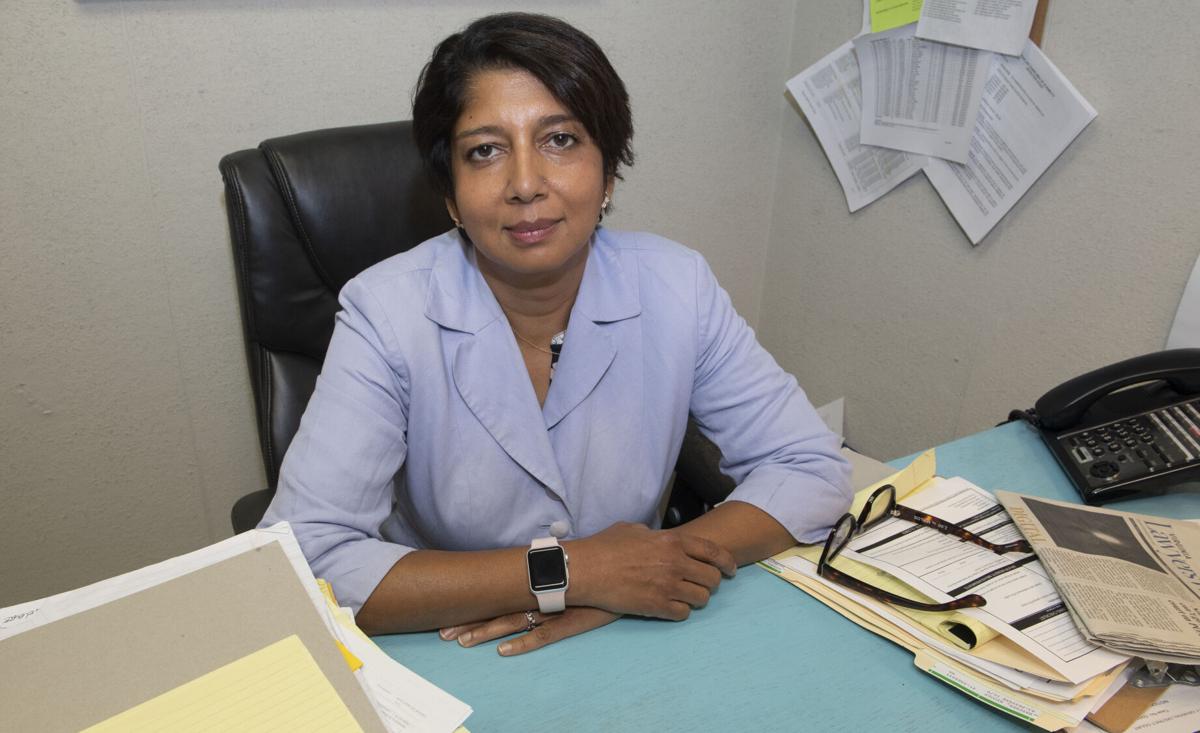 Attorney Mona Raza has helped secure aid for people who would be evicted now that a pandemic-related moratorium has expired. 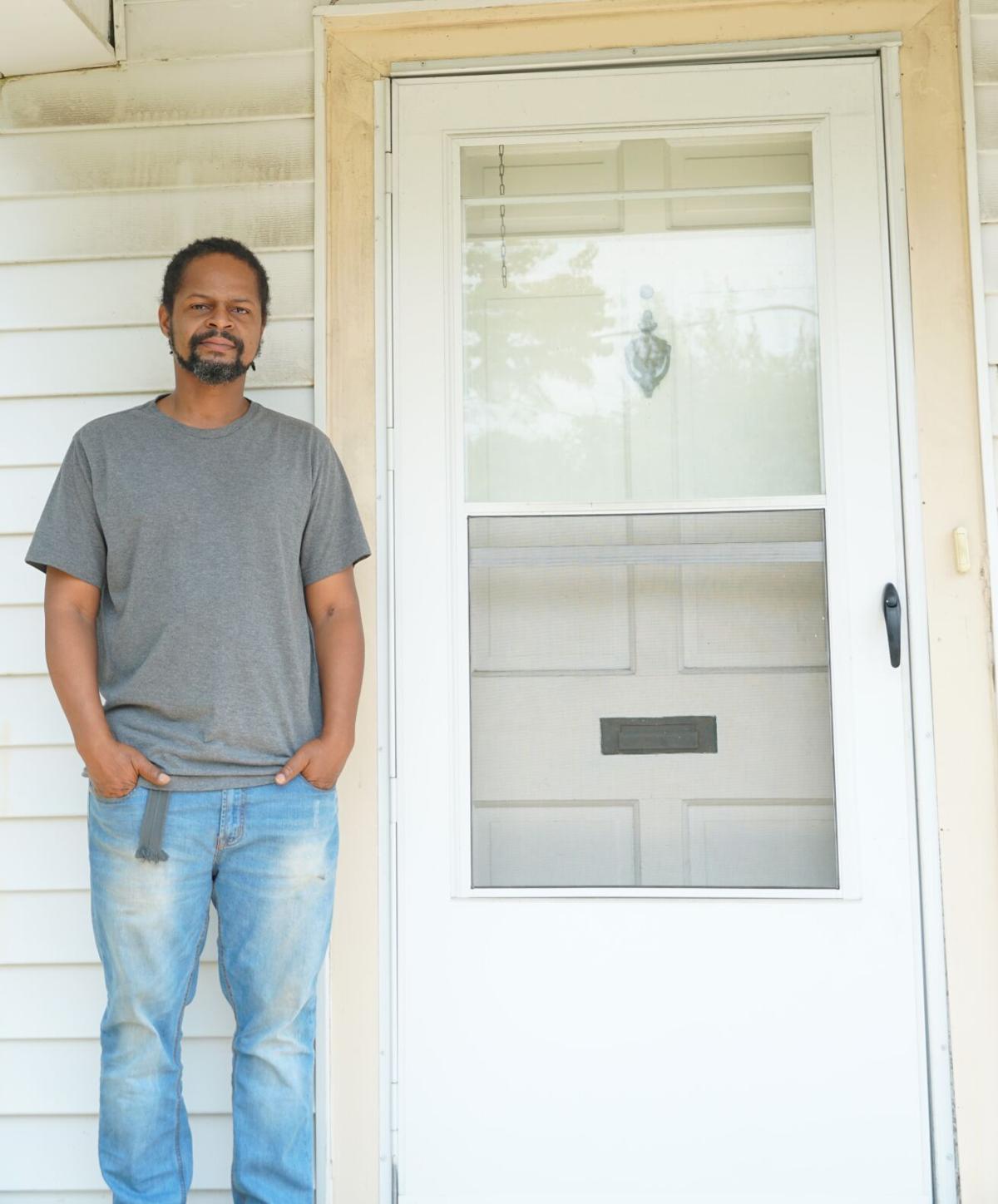 Eric Cook stands outside his front door in the Melrose-Rugby neighborhood. He said he expects rent relief will help prevent him from being evicted, after he fell behind on rent during the coronavirus pandemic. 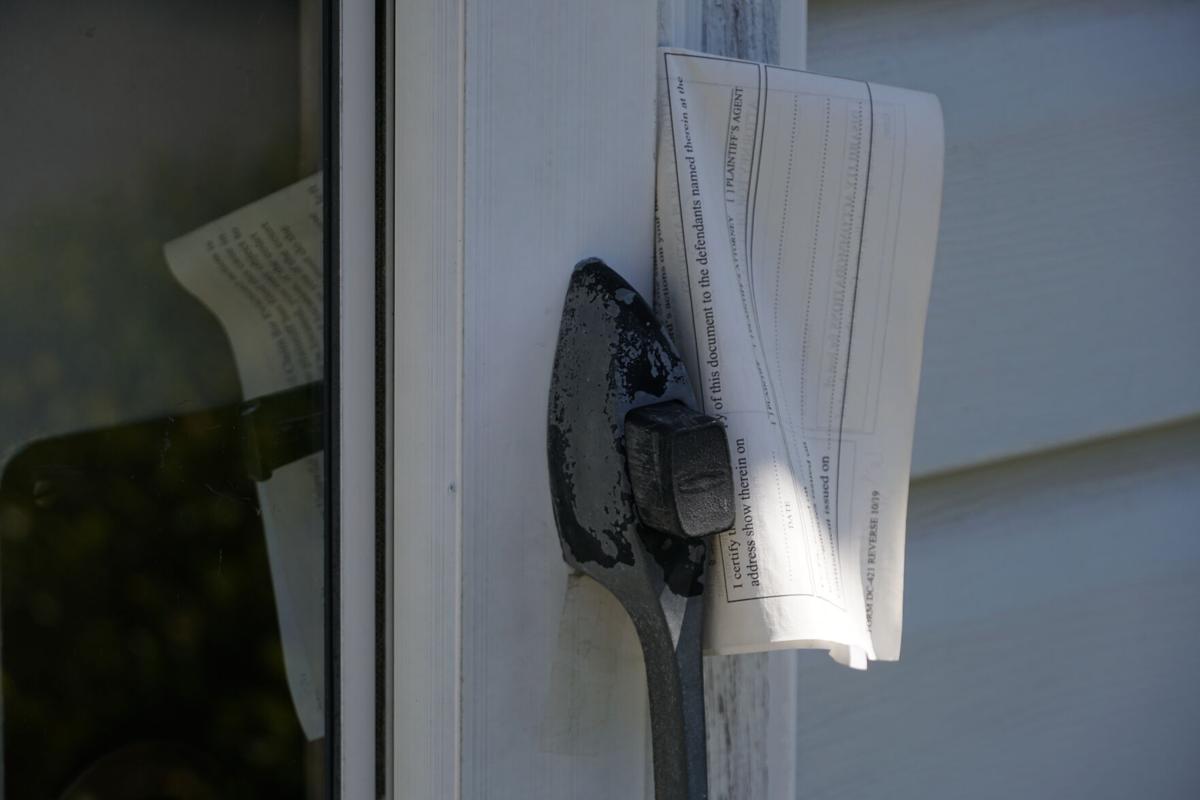 Relief for overdue rent will hopefully soon arrive for northwest Roanoke resident Eric Cook, keeping him in his home of five years, he said — but even after other tenants in Virginia and across the nation pay back their landlords, an end to coronavirus-era renter protections leaves open the door for a worrisome wave of evictions, according to officials.

Rent payments started to fall behind for Cook, 42, when he said he reduced his work hours as a delivery driver, out of concern that running in and out of restaurants every day would expose him to COVID-19, endangering his parents, who are at-risk in their older age, and rely on his care.

“Work was available for me, but being that I picked up food from various locations, sometimes I’d go into the restaurant and I noticed even with COVID going around … everyone still not wearing masks,” Cook said. “So at some point, I thought, ‘I’m gonna mess around and get sick,’ not because I’m not wearing a mask, but because other people are just being themselves.”

A 14-day “notice to quit” — the first formal communication in a Virginia eviction proceeding — arrived at Cook’s house a few weeks early, prior to the end of a nationwide pause on evictions for people unable to pay rent due to coronavirus hardships. A letter attached to the notice made him aware of rent relief options.

“It was pretty simple,” he said, on applying for the Virginia Rent Relief Program. “I just filled that out. And management, they’re just now completing the document to send over, so they’re supposed to withdraw the eviction.”

The three-bedroom house he has rented in the Melrose-Rugby neighborhood since 2016 recently came under new management with a Lexington-based company. Communication between tenant and faraway landlord was nonexistent, Cook said — until that 14-day notice arrived in mid-July, with $2,500 worth of back-rent due.

“I think I’m taken care of now, but I’m still preparing to go to court, just in case,” he said from his front porch Thursday. “My property management didn’t want to contact me back … You have to stay on them.”

The nationwide eviction moratorium, enacted by the Centers for Disease Control early into the COVID-19 pandemic, expired at the end of July. In Southwest Virginia’s largest city as of mid-July, there were 179 active eviction cases, including Cook’s, according to a Roanoke General District Court tally.

“It’s like shuffling people out to get new people in,” Cook said. “Kind of feels like you’re just a disposable cog in a big wheel of bureaucracy.”

How to get help

Officials involved with housing via the Blue Ridge Continuum of Care are concerned that — even with millions of dollars available in rent relief — a late-summer wave of evictions in August and during months to come could cause a flood of homelessness.

Roanoke is encouraging its residents in need to go online to Endhomelessnessblueridge.org, and use the ‘get help’ tab to determine what aid they are eligible for, said Human Service Director Matt Crookshank.

“The eviction moratorium has been, I think, good and bad,” Crookshank said. “It’s been good at keeping people safe in their house, because having a huge homeless population during a pandemic would have just made it doubly as awful. But we do realize the impact it had on landlords’ inability to collect income.”

Furthermore, there are people who were protected from evictions for longer than a year, piling up untold sums of rental debt, he said. Now that the moratorium is ended, eviction cases are expected to increase, and it stands to reason that homelessness could rise as a result.

“It’s kind of hard to gauge how bad things are going to be,” Crookshank said. “We’re preparing as much as we can to be able to handle a high volume of people looking for assistance.”

As of mid-July, Virginia had doled out some $312 million for rent and mortgage relief statewide to Virginians whose ability to pay for housing was impacted by the coronavirus, said a spokesperson with the state Department of Housing and Community Development. The average payout was $6,356, distributed as more than 55,000 payments.

“There’s tons of assistance. Even more important than anything else, though, we still have a shortage of housing in our area,” Crookshank said. Especially for people earning below 30% of the area median income, “there’s just not enough housing for people that fall in that low income area, even without a pandemic and eviction moratorium.”

Though Virginia does not have its own state eviction moratorium, one temporary law requires judges to put a 60-day pause on eviction proceedings if the tenant can prove their failure to pay was caused by coronavirus impacts, the state housing agency spokesperson said. That emergency stipulation is effective still through September, and as the Virginia General Assembly prepares to convene for a special session starting Monday, lawmakers are discussing further renter protections.

“A lot of landlords who have seen the benefits of the program are continuing to apply for their tenants,” Raza said. “But there are people who are not. They would rather try to replace the tenant.”

An increasing number of people are seeking Legal Aid’s counsel for evictions, and for help navigating rent relief, Raza said.

“They are probably going to be homeless, if they are actually evicted,” Raza said. “They’re having trouble finding a place to live.”

Raza, like Crookshank, also referenced the overall lack of affordable housing in the Roanoke Valley, especially for low-income people and families. Fortunately, many landlords are likely to drop an eviction if they are repaid through some form of rent relief, she said.

“Once a landlord or property management company has seen success where they’ve gotten back-rent paid, they’ve become more willing to work with tenants, and be patient before trying to get possession through eviction,” Raza said. “It’s a win-win for everybody … because landlords will get paid and then the tenants don’t have that debt to carry around with them, and don’t have to worry about being evicted.”

Even still, if a landlord wants their tenant gone, well — it’s the landlord’s property.

“The moratorium only protected people that were being evicted because of nonpayment of rent,” Raza said. “There were other evictions going on for other reasons, including expiration of leases.”

She highlighted one anonymous case involving a Roanoke man and his wife, who is sick with cancer. Even though their landlord received full payment for overdue rent through the relief program, the couple’s lease is expired and they are still being evicted, with nowhere else to go.

“We’re expecting to see more evictions being filed … There will be some uptick,” Raza said. “But with the Rent Relief Program — and the moratorium really helped to get this program up and running — hopefully both landlords and tenants will see that there is some help out there, and it will prevent some evictions that would have otherwise come forward.”

Uncertainty abounds for tenants unsure how much longer after June 30 they will be protected from eviction, and for landlords wondering how to proceed in running their business.

A Virginia House of Delegates committee is set to weigh Tuesday whether tenant protections established because of the COVID-19 pandemic should be permanent.

Virginia tenants who are struggling to pay rent in the wake of COVID-19 just got an additional time-out, as well as the prospect of future relief.

The mood in Roanoke General District civil court on May 19 had an air of apprehension.

Legal aid attorney Mona Raza at her office in Downtown Roanoke: “A lot of landlords who have seen the benefits of the program are continuing to apply for their tenants. But there are people who are not. They would rather try to replace the tenant.”

Attorney Mona Raza has helped secure aid for people who would be evicted now that a pandemic-related moratorium has expired.

Eric Cook stands outside his front door in the Melrose-Rugby neighborhood. He said he expects rent relief will help prevent him from being evicted, after he fell behind on rent during the coronavirus pandemic.