Colin Powell, military leader and first Black US secretary of state, dies at 84

As overdose deaths reach record levels in Virginia, meth is seen as a growing threat
16 comments
Share this
{{featured_button_text}}
1 of 3 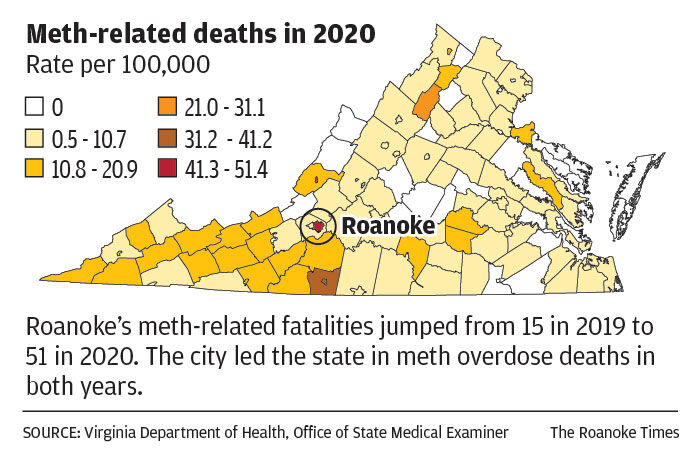 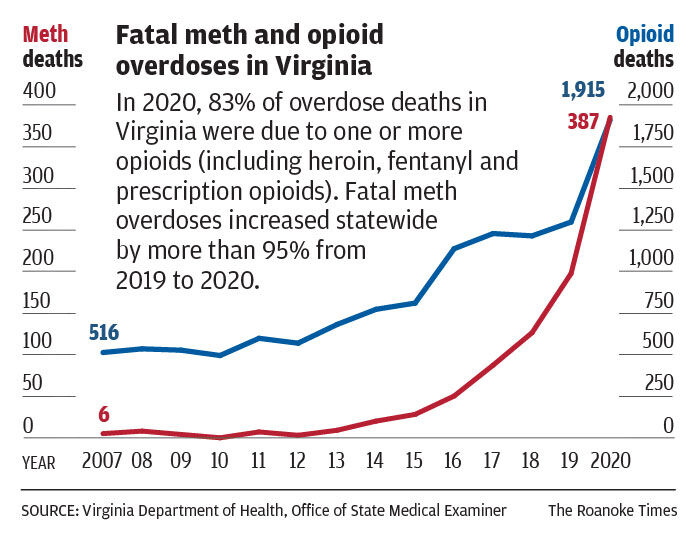 The numbers tracking a record-shattering year for drug overdoses in Virginia — propelled by the opioid crisis, including the rising presence of deadly fentanyl — also reveal another alarming trend: a surge in deaths linked to methamphetamine.

The data, compiled by the Office of the Chief Medical Examiner, included a near doubling of the presence of meth in fatal cases. Meth-related deaths rose to 387 last year, up from 198 in 2019, across the state.

Those numbers are dwarfed by opioid-related deaths, which climbed to 1,915, up from 1,298 in 2019. But the rise in meth marked the highest percentage jump in the detection of any drug in fatal overdose cases. And it continued a trend that authorities first began seeing about six years ago, after years of the highly addictive stimulant being a relative rarity in death investigations.

And the numbers continue to increase. Based on preliminary data from the first quarter of 2021, state health officials predict 488 meth-related deaths in Virginia this year.

“It’s very much so on the rise,” said Christine Baldwin of the Hope Initiative, an addiction recovery program serving the Roanoke Valley.

Methamphetamine addiction is now one of the most frequently cited substance abuse battles that clients of the Hope Initiative are fighting, Baldwin said. In surveys of new clients, meth ranks second as a person’s primary substance struggle. And it comes in first as a secondary substance problem.

The historic jump in overdose deaths last year came as no shock to addiction treatment specialists. They had been sounding the alarm for months as the unprecedented disruptions of the pandemic spurred economic stress, social isolation and a fracturing of crucial services and support networks.

Virginia’s data shows that fatalities hit a peak during the second quarter of 2020, when COVID shutdowns were just taking effect. Deaths already had been on the rise in the months leading up to that, though, with a year-over-year increase in each quarter of 2020.

The state’s fatal drug overdose numbers have risen in seven of the eight past years. They saw a dip in 2018, but even then, meth-related death reports continued to grow, as did those attributed to cocaine, another stimulant drug.

In Virginia, Roanoke was the starkest illustration of the rising meth epidemic. The city saw its meth-related fatalities jump from 15 in 2019 to 51 in 2020. It led the state in meth overdose deaths in both years. Preliminary numbers for the first quarter of 2021 show another nine meth-related deaths in the city.

Western Virginia as a whole has been hard-hit by the resurgence in meth. The two state police districts covering the region accounted for 58% of the meth seizures submitted to state labs for testing in 2019, according to a Department of Forensic Sciences report.

Total meth seizures and arrests statewide have seen a steady and steep increase over the past decade.

“It’s definitely something we’re aware of,” said Sgt. Lovell with the special investigations unit of the Roanoke Police Department. “We try to attack it from all angles.”

That includes working to expand treatment and prevention programs, said Lovell, whose first name the department asked not be used due to the nature of his work.

Roanoke police were partners, along with the Bradley Free Clinic, in creating the Hope Initiative. The program, the first of its kind in the state, pairs people who are seeking help with peer support counselors and other resources.

The guiding principle behind it is the realization that communities can’t arrest their way out of a problem with such deep-rooted causes. Addiction is now recognized as a complex disease.

That requires a complex and layered response to help people get treatment. “This is not just a police department issue. It’s an everybody issue,” Lovell said.

The upturn in meth use, which is unfolding nationwide, comes amid an opioid crisis that is still gripping communities.

Methamphetamine once dominated headlines and in 2006 led to federal legislation restricting access to cold medication containing pseudoephedrine, a key ingredient in meth.

That made inroads in beating back the number of dangerous meth labs seen, and by 2010 attention was starting to shift to a rapid rise in heroin-caused overdose deaths.

But the meth supply chain continued to evolve, and now a flood of cheap, potent product is pouring in from across the country’s southern border. Today, there is high availability of the drug across the nation, according to Drug Enforcement Administration reports, and it’s breaking through into new regions that weren’t historically major markets for it, like New England.

The drivers of the rising use are still being debated by advocates. Could it be the surge in supply? Cost? Shifts in the market as authorities work to crack down on opioid distribution?

The new wave of meth can catch people by surprise given the intense national focus on opioids. But the two hazards aren’t mutually exclusive.

The use of multiple drugs, called polysubstance abuse, is a complicating and pervasive part of addiction. Fentanyl, an opioid painkiller that is 100 times more potent than morphine, was a contributor in nearly 65% of fatal overdoses where meth was also a factor last year, according to Virginia’s statistics.

Heroin was present in 19% of meth-connected deaths. There might be overlap in those figures in cases where three or more substances were detected.

The mixing of substances has been a long-running and dangerous problem, first responders said. Some people might not even realize what they’re taking. Authorities have reported finding marijuana laced with fentanyl or heroin cut with meth.

The potential complexity of each overdose call can make the work of emergency medical responders difficult. People on scene might not know exactly what substances are causing the crisis.

And Narcan, so effective in opioid overdoses if administered in time, has no effect on methamphetamine and other psychostimulants.

“It can be hard, for us at our level without lab work done, to know what we’re dealing with,” Cady said.

Medics do what’s possible to provide care until a patient can be taken to a hospital, and Roanoke Fire-EMS has been adopting new techniques to keep airways clear and place breathing tubes. The protocols can be employed for overdoses or other conditions where a swift restoration of oxygen and blood flow is needed.

Roanoke Fire-EMS is also among 130 organizations that came together to form the Roanoke Valley Collective Response to the Opioid and Addiction Crisis, a coalition that also includes the police department and Hope Initiative.

In early proposals, the coalition’s name only referred to the opioid crisis. But advocates spoke up and stressed that it was important to shed light on the broader reach of the addiction epidemic beyond opioids alone.

Baldwin said raising that awareness and spurring more conversations about addiction in the community is key.

“We need to talk about it,” said Baldwin, who’s with the Hope Initiative. “Addiction still carries such a stigma. There is so much guilt and shame and lack of understanding and education. It can be really uncomfortable for a lot of people to talk about.

“But the more we can have those open conversations and advocate for people who are seeking treatment and advocate for an expansion of services in the community, that is how we’re really going to make an impact.”

In September, the Roanoke Valley Collective Response rolled out an action blueprint that outlines dozens of steps it plans to take over the next three years.

Some of its focuses to date have included strengthening re-entry support for people leaving jail custody, exploring how to make recovery housing more available and making it easier for families of people battling addiction to connect with support.

The coalition is also piloting a program with Salem Fire-EMS to help people in crisis get resources quickly. Overdose patients in Salem are now asked if their names can be shared with the Hope Initiative so that agency can reach out to them.

The aim is to bridge the gap between when a person wants to get help and when they’re actually able to find services.

Some 280 people have been involved in the collective response to date, and the group hopes to continue growing that coalition. Governments, health care providers, recovery support groups, families and individuals all have important roles to play, Baldwin said.

“It’s going to take all of us pulling together,” she said. “I think everyone has a part in fighting for people who are having a hard time fighting for themselves right now.”