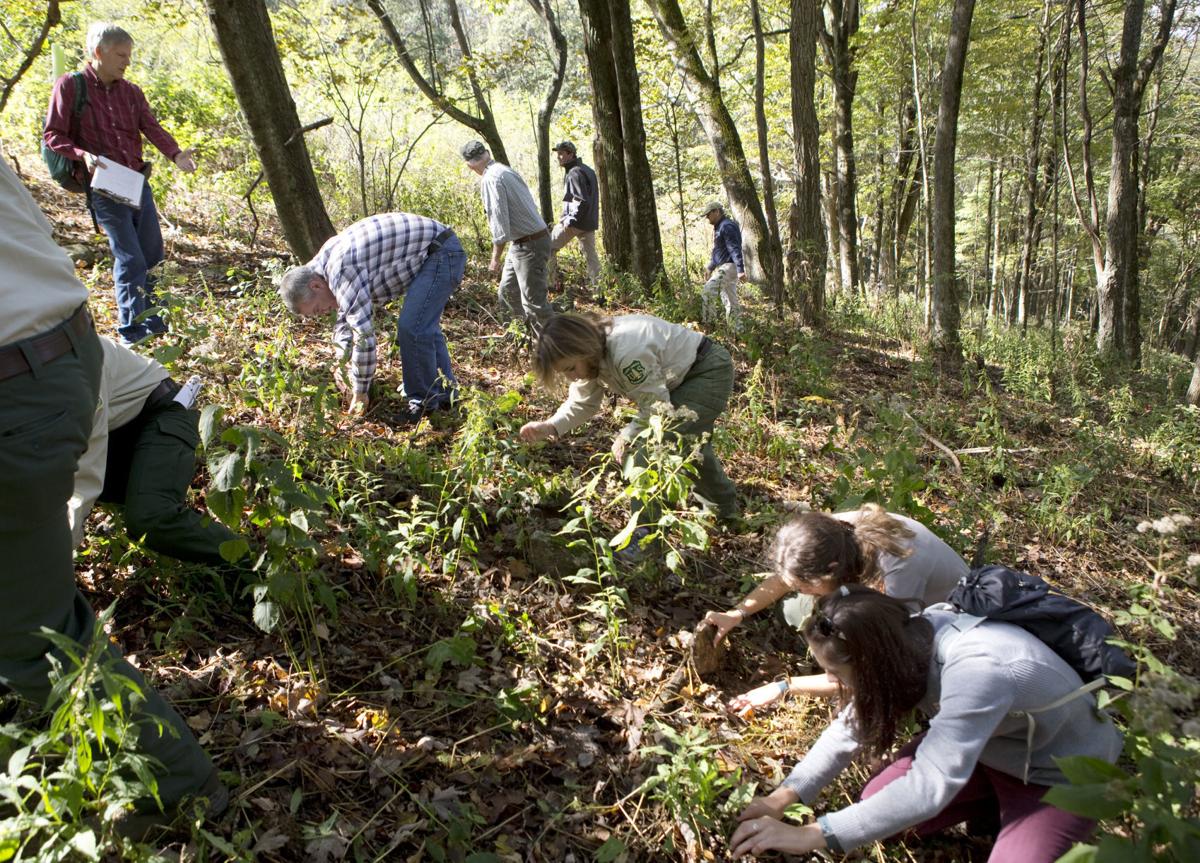 Norm Reichenbach (far left), an ecologist at Liberty University, keeps count of how many Peaks of Otter salamanders are found as employees with the U.S. Forest Service and U.S. Fish and Wildlife Service search. 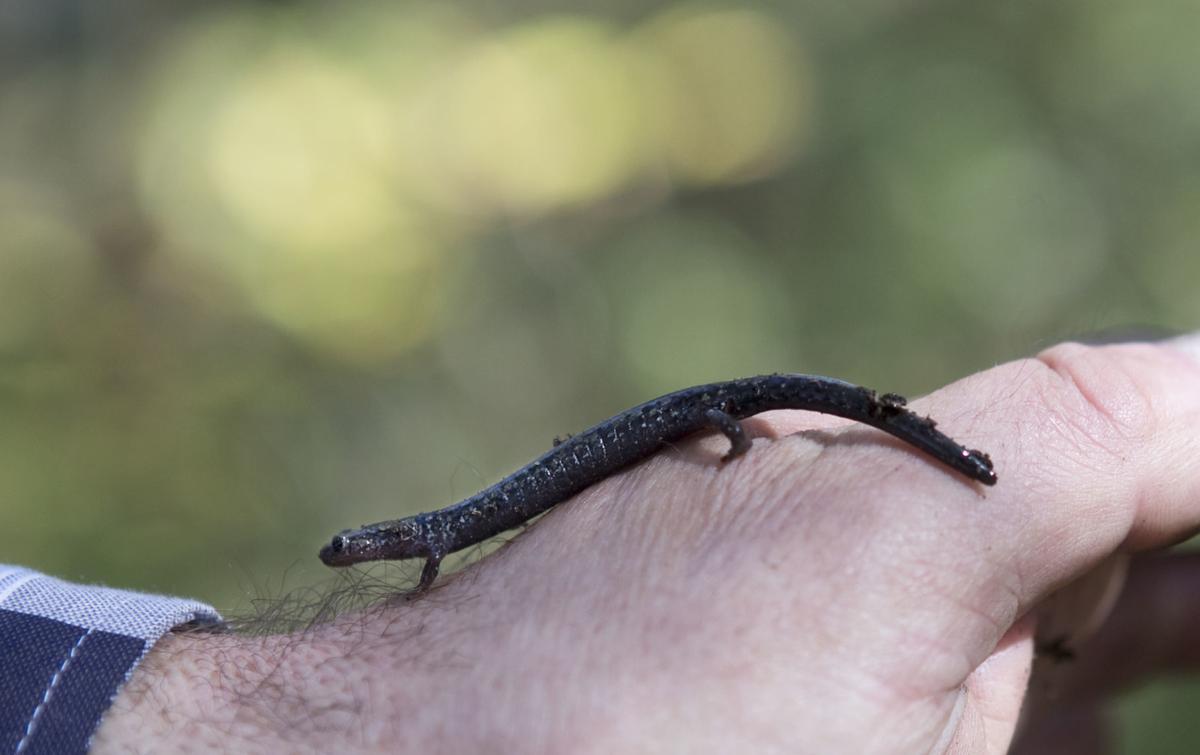 The Peaks of Otter salamander lives in a 45-square-mile area in Bedford, Botetourt and Rockbridge counties and was considered for an endangered species listing by the U.S. Fish and Wildlife Service. Researchers concluded the species is safe, for now.

Along a stand of trees on the side of Apple Orchard Mountain, no stone has been left unturned in the search for the Peaks of Otter salamander.

Whenever someone upended a rock or a downed log during a site visit last week, revealing one of the dark brown salamanders slithering in the moist dirt below, Norm Reichenbach would cry out: “Peaks!”

Reichenbach, a Liberty University biology professor, has made the declaration often enough over the years that the U.S. Fish and Wildlife Service recently decided not to list the amphibian as an endangered or threatened species.

It’s not that the Peaks of Otter salamander is widespread. It is found only in a 45-square mile area of Bedford, Botetourt and Rockbridge counties — one of the most restricted ranges of any salamander in the country, according to the Center for Biological Diversity, which asked that it be given federal protection.

But Reichenbach is convinced, based on nearly 30 years of research, of the salamander’s stability in an area that has been carefully conserved by its two key landlords: The U.S. Forest Service and the National Park Service.

“Collaboratively, collectively, we were able to do right by this species,” said Wendi Weber, a regional director for the Fish and Wildlife Service.

Lacking lungs, the Peaks of Otter salamander breathes through its skin. They inhabit forests at high elevations in the Blue Ridge Mountains. After a rainfall, they emerge at night from under rocks, logs and leaf litter to feed on insects and earthworms.

“When it’s hot and dry, the salamanders just hunker down,” Reichenbach said.

One of the biggest threats to the Peaks of Otter salamander is rising temperatures, whether caused by climate change or logging, which increases the temperature and decreases moisture on the forest floor.

So far, its survival is tied in large part to where it lives, mostly in the Jefferson National Forest and off the Blue Ridge Parkway. The Forest Service and the National Park Service have developed a conservation area of about 20,000 acres.

No logging is permitted on 6,000 acres of parkway land, and the Forest Service either bans or restricts timbering on another 7,700 acres.

A thick canopy of trees prevents the sun from drying out the salamanders’ feeding grounds and keeps their skin moist enough for them to breathe, according to Reichenbach and a bevy of officials from the fish and wildlife, forest and park services who accompanied him into the woods last week.

While the Peaks of Otter salamander still faces risks, officials at the Center for Biological Diversity had no quarrel for the most part with the decision, published last week in the Federal Register, not to list it as an endangered or threatened species.

“I think there’s always cause for concern, but it doesn’t seem as dire as some of the other species we look at,” said Noah Greenwald, endangered species program director at the center.

About 1 million of the planet’s 8 million species are at risk of going extinct in the near future, the United Nations said in a report released in May.

The global assessment, based on a review of about 15,000 scientific and government sources, placed much of the blame on human activities such as climate change, overfishing, pollution and invasive species.

“While the planetary garden still exists, it is in deep disrepair, frayed and fragmented almost beyond recognition,” Thomas Lovejoy of George Mason University told USA Today when the report was released in Paris.

In the Roanoke and New River valleys, the largest single, short-term threat is construction of the Mountain Valley Pipeline, according to Rupert Cutler, a local environmental advocate who served as the U.S. Department of Agriculture’s assistant secretary for natural resources.

Wild Virginia and six other environmental groups filed a legal challenge in August, claiming that permits issued by the Fish and Wildlife Service two years ago failed to adequately protect at least four species of endangered fish and bats.

Clearing trees for the pipeline right-of-way — which runs 125 feet wide and 303 miles long through the two Virginias — has damaged the habitat of the Indiana and northern long-eared bats, a petition filed with the 4th U.S. Circuit Court of Appeals claims.

And erosion from digging trenches for the buried pipeline has washed harmful sediment into the river and stream homes of the Roanoke logperch and the candy darter, the petition claims.

The Fish and Wildlife Service and the Federal Energy Regulatory Commission, the lead agency overseeing work on the $5 billion project, have agreed to reexamine a biological opinion and incidental take statement that govern its impact on endangered species.

While that process is pending, Mountain Valley has said it is suspending new construction work in much of Virginia.

In the longer term, the greatest danger to endangered species here and elsewhere is climate change, which leads to warming rivers, droughts, wildfires and other such problems, Cutler said.

Earlier this year, the Trump administration moved to weaken the Endangered Species Act, which has been credited with saving the bald eagle, California condor and scores of other animals and plants from extinction since it was passed in 1973.

Among other things, the changes allow government officials to publicly consider the cost of saving a threatened species, and could allow them to disregard the possible impact of climate change. The Center for Biological Diversity and other groups have filed a lawsuit challenging the rollbacks.

The changes did not play a role in consideration of the Peaks of Otter salamander, said Anthony Tur, a regional at-risk species coordinator for the Fish and Wildlife Service.

But critics say the new rules could pose serious threats in the future. Greenwald said 18 species have been given federal protection under the Trump administration, the lowest number for any president at this point in their term.

At the Sunset Field overlook of the Blue Ridge Parkway, a crowd gathered Wednesday eager to hunt for salamanders.

Usually, such efforts are undertaken by Reichenbach and his students. Teams from Washington and Lee University and Virginia Tech are also involved in the research.

On this day, Reichenbach and Liberty University student Hannah Suber were joined by about 30 government officials, congressional staff members and others who turned out for a news conference to announce the salamander’s ability to stay off the endangered species list.

As they headed to a site marked off by red flags, Reichenbach warned that the recent dry, hot weather might have driven the salamanders deeper into the ground — reducing the number of “Peaks” shouts that might be heard.

After about an hour of searching, 11 salamanders had been found, measured and recorded before being returned to the forest floor. That amounted to about a third of what would be expected under ideal conditions.

Firm numbers are difficult to confirm, but Reichenbach estimated the population at in the thousands.

More than 190 other species in the eastern United States have been determined to be safe due to research and conservation efforts since 2011, according to Meagan Racey, a spokeswoman for the Fish and Wildlife Service.

“The more we learn, the better we can manage the land,” said Beth LeMaster, deputy supervisor for the Jefferson National Forest, who joined a row of searchers who got down on their knees to comb the mountain side.

Part of the research involves counting the number of eastern redback salamanders, a competitor to its Peaks of Otter counterpart that could take over it the habitat is not preserved.

Greenwald, of the Center for Biological Diversity, said more efforts are needed like the one that saved a salamander in the Blue Ridge.

“It definitely points to what we need to do to stem the tide of extinction,” he said.

Some information in this story came from the Associated Press.

Photos: The hunt for The Peaks of Otter salamander in the Blue Ridge Parkway

The Peaks of Otter can only be found in a 45-square mile area of Bedford, Botetourt, and Rockbridge counties, but is threatened by rising temp…

Norm Reichenbach (far left), an ecologist at Liberty University, keeps count of how many Peaks of Otter salamanders are found as employees with the U.S. Forest Service and U.S. Fish and Wildlife Service search.

The Peaks of Otter salamander lives in a 45-square-mile area in Bedford, Botetourt and Rockbridge counties and was considered for an endangered species listing by the U.S. Fish and Wildlife Service. Researchers concluded the species is safe, for now.