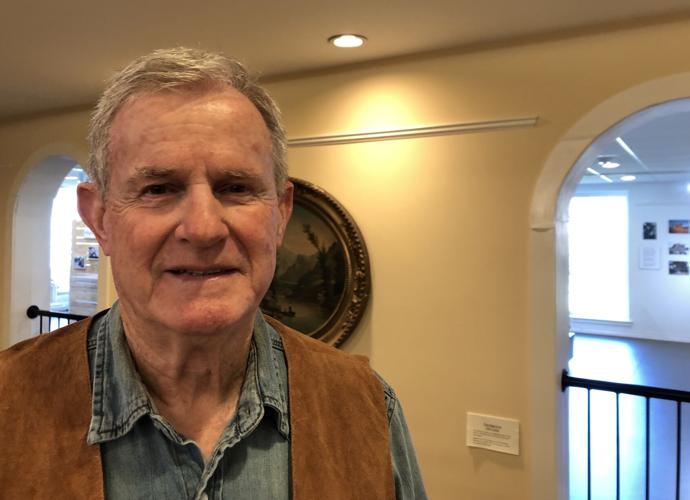 Ted Carroll set out to write a memoir but ended up creating a four-volume history of the community where he grew up. 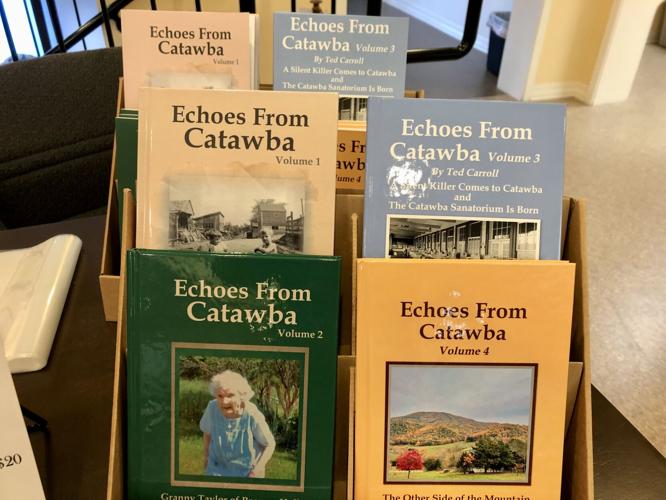 The four volumes of “Echoes From Catawba” explore the people and landmarks of the Roanoke County community.

Monday, Nov. 21, 2022, 8:52 a.m.:  The name of Ted Carroll's history series is "Echoes From Catawba." This was incorrect in an earlier version of this article. The story has been updated.

Ted Carroll said that when he was growing up in Catawba, people outside the rural Roanoke County community seemed curious, wondering who were those people “over the mountain” and what were their lives like.

Decades later, having left the area, retired from two careers and moved back, Carroll still wanted to answer the questions. A few years ago, he set out to write a memoir but soon broadened his topic – and ended up crafting a four-volume history that explores the people and local institutions that surrounded his boyhood.

“I could never get my upbringing out of my heart and soul. It followed me,” Carroll said Saturday at the Salem Museum, where he held a book-signing and meet-the-author event.

Now 82, Carroll thinks his “Echoes From Catawba” series is the only local history written about the community.

Each book has a different focus – the Catawba hospital, which was built before the Civil War as a resort; “Granny” Taylor, a Catawba woman – and Carroll’s aunt – who happily kept to old ways of living, refusing modern conveniences through a life that ended in a few years ago at the age of 108; and a look into some of the specifics of Catawba lore, ranging from the demise last year of the Homeplace Restaurant back to the community’s naming, in the 1700s, after a Native American tribe whose lands extended south through the Carolinas.

There also is a volume that covers a wide range of Carroll’s relatives, who are numerous – his family tree connects to both of Catawba’s largest families, the Garmans and the Martins, he said. Carroll is the grandson of William and Luemma Garman, who came to Catawba in 1889; his mother was their 17th, and last, child.

Among the Catawba tales that Carroll covers are the history of the Catawba Mercantile, also known as Keffer’s Store and run for decades by Minor Keffer, whose laugh could be heard “half a mile away, and on a clear day a mile at least.” Keffer eventually helped organize the effort to bring electricity to the area. His daughter Betty Munsey – who is also a retired Cooperative Extension agent – is a contributor to the books.

There are stories from the Craig Springs resort, nearby in Craig County, where people asked to stay in cabins, rather than the grand-looking, three-story Merrimack Hotel, because of its reputation for wild parties. And there are personal accounts galore from scores of Catawba residents, describing everything from crosscut sawing to berry-picking to Christmas celebrations to courtships that in one case involved a young woman getting a tractor and pulling her boyfriend’s stuck car out of the mud.

The stories in his books “sound like fiction,” Carroll said. “… People say, ‘You’re making this up.’ But no, it’s all documented non-fiction.”

One of the people who stopped by Carroll’s table Saturday was Kenneth Conner, who said his family had called Catawba home for generations and that his father’s family had lived on land that was flooded by the creation of the Carvins Cove reservoir. Conner bought the entire “Echoes” series and said he planned to give them to his grandchildren so they would know more about the region.

“And I’ll read them before I give them to them,” Conner said, grinning.

Eventually, his father took a series of jobs at the sanitorium, rising to become its director of operations, he said.

The sanitorium later became a state-run mental healthcare facility, a role that it continues today.

Carroll left Catawba for Virginia Tech, where he earned bachelor’s and master’s degrees. He worked 25 years as an extension agent around Orange County and eventually also was elected as the mayor of the town of Orange.

Asked what he recalled most about his time in local government, Carroll recalled debates about possible uranium mining – Carroll said he was part of a state delegation that traveled to Texas to see working uranium mines and returned convinced that Virginia was not a suitable location for the operations.

Another part of the mayor’s job that he remembered was a late-night phone call that a cattle herd had wandered into town. Carroll said he and another man got up to round them up.

Stories like that, or about how after Carroll retired from Cooperative Extension, he became a Baptist minister in North Carolina for 14 years, may get a fuller telling if he returns to writing an autobiography, he said.

For now, he is focused on selling the self-published “Echoes” series, which Carroll said he began in 2018 and finished last year after producing one volume per year. Each book involved 75 or so interviews, said Carroll and his wife, Tina, who joined him for interviews and handled formatting and other facets of turning words into printed product.

On Saturday, Tina Carroll said that so far the books have been well-received by both longtime residents and newcomers. The Carrolls described having a couple who bought the books, then realized they were reading about the property they’d just moved to.

Carroll said he figured his books would have something for anyone who ever lived in or near Catawba, but also reflected experiences common in agricultural communities throughout Appalachia.

More than that, the books were a story Carroll said he was driven to tell.

“I had to come back to my roots,” Carroll said.

“Echoes From Catawba” is for sale at the Salem Museum. Carroll’s next book event is scheduled for Dec. 3 at Virginia Tech’s Catawba Sustainability Center, which is the former Catawba schoolhouse.

The Christiansburg Town Council earlier this month approved a plan to end its funding for three school resource officer roles, a decision that will become effective at the start of the fiscal year that begins July 1.

CASEY: Are you getting regular mail deliveries in Roanoke region — or not?

An increasing number of people around Roanoke have noticed they no longer receive mail six days per week. What’s up with that? The postal service is short-handed.

A year-round DST bill failed in the Senate Tuesday.

The former Roanoke County supervisor didn’t disappoint during his initial outing on the election-overseeing panel. With drama and detail, Bedrosian outlined a scheme through which (he said) people could get away with voter impersonation fraud.

Ted Carroll set out to write a memoir but ended up creating a four-volume history of the community where he grew up.

The four volumes of “Echoes From Catawba” explore the people and landmarks of the Roanoke County community.