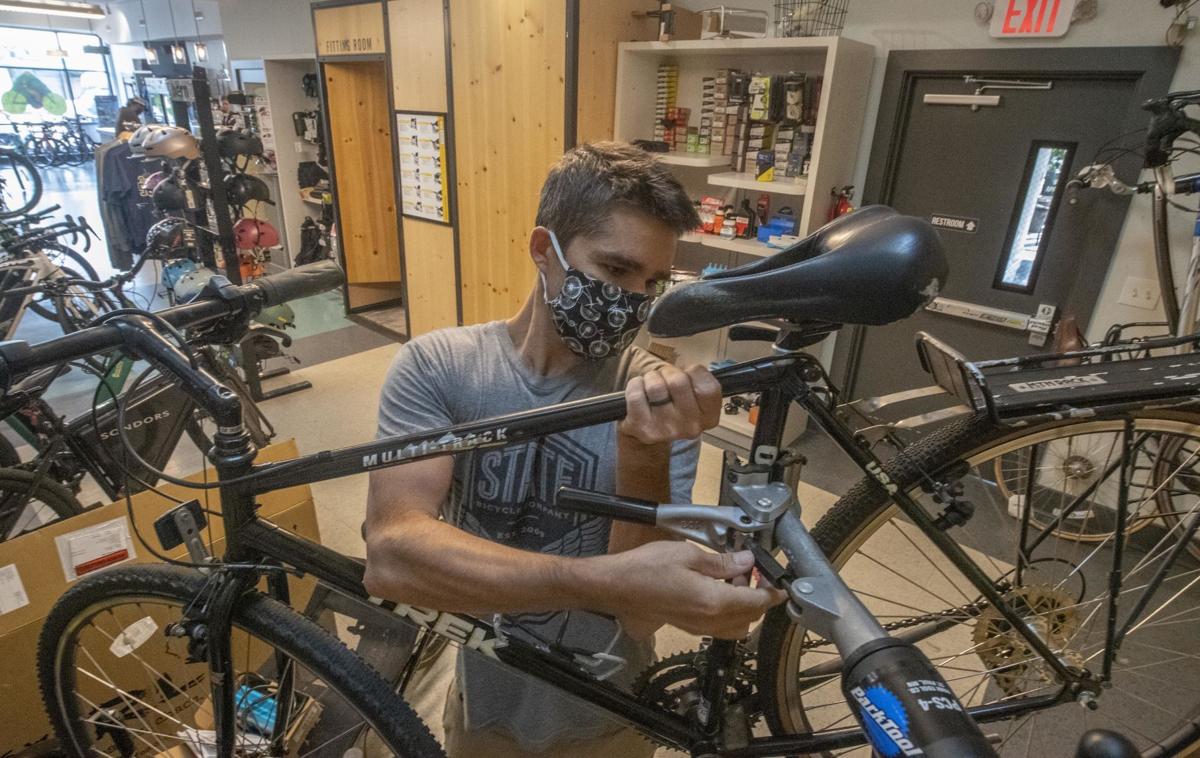 Stephen Ambruzs, the owner of Downshift Bikes and Brews in Roanoke, said the bicycle business has exploded during the pandemic. “We’ve seen a lot more people come in and buy bikes,” Ambruzs said. 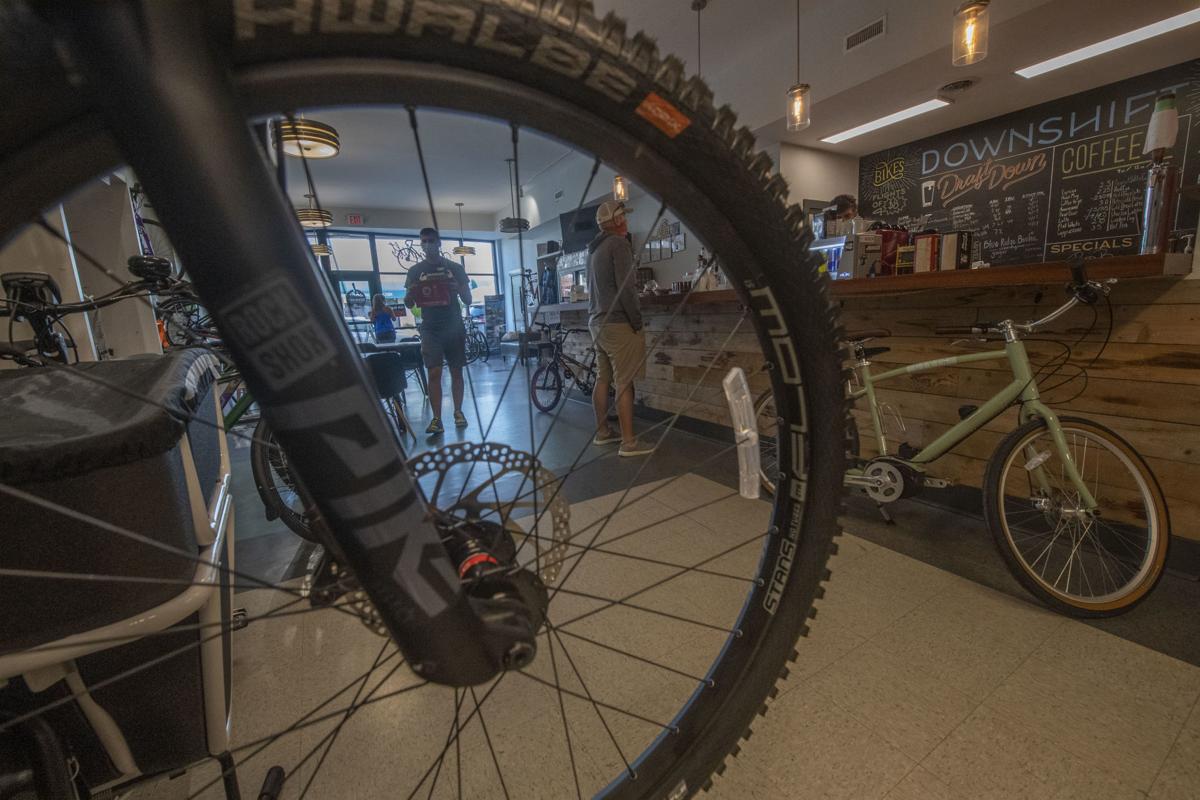 While the cafe at Downshift Bikes and Brews in Roanoke has struggled during the pandemic, experiencing a roughly 50% decrease in revenue, the cycle side has seen tremendous growth. 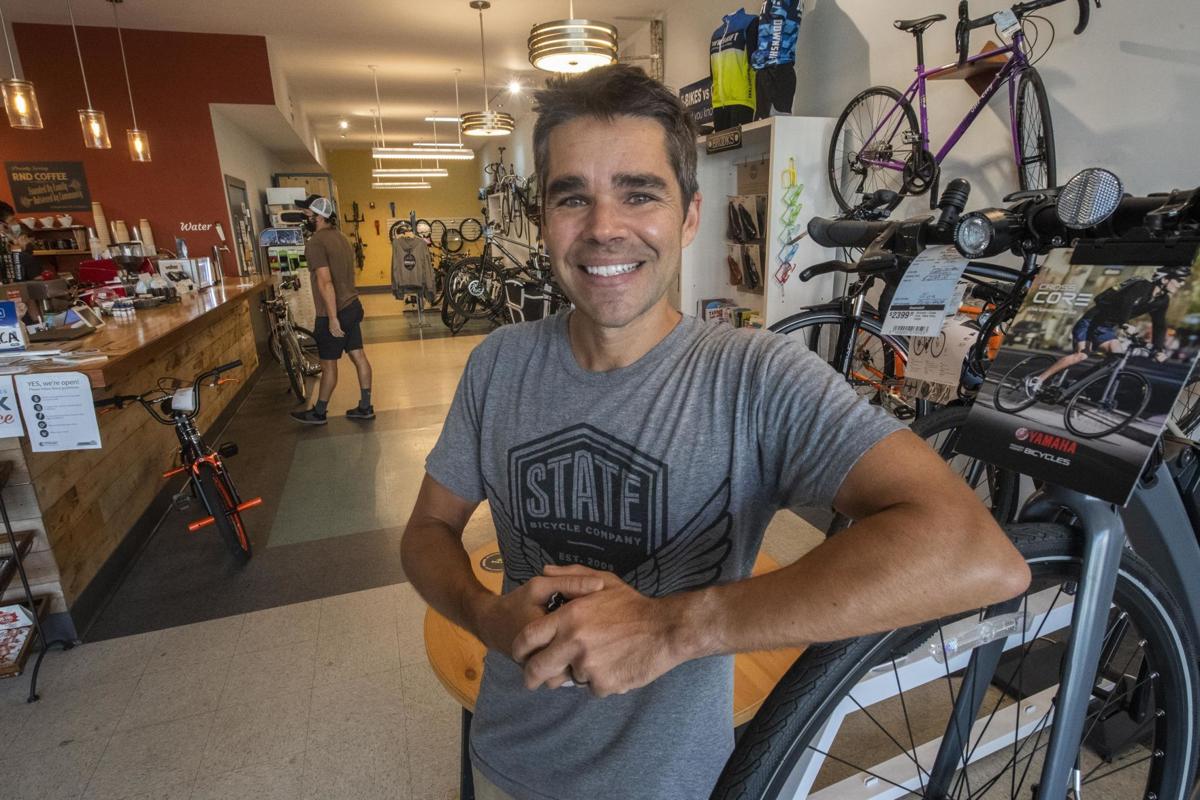 Ambruzs said he’s had to turn away customers because the shop had no bikes to sell them. In response, Downshift began purchasing used bikes to restore and sell, Ambruzs said. They’ve also done custom projects for clients, building to their specifications.

When the COVID-19 pandemic closed Kellie Foy’s gym, she pulled the mountain bike gathering dust out of her garage.

“I decided I was going to get back on the bike as a way to get outside and to get some cardio and to just sort of try to replace what I was missing at the gym,” she said.

Foy, who lives in Roanoke County, took the bike to East Coasters for a tune-up in the spring and about a month ago also purchased a gravel bike from the shop. She recently took it out for a 17-mile ride on the Virginia Creeper Trail in Damascus.

Her family has spent much of the last several months stuck inside, practicing social distancing. The mother of three said she needed exercise and fresh air to keep from going stir crazy. Biking was the solution.

“Essentially, I do it for my sanity,” Foy said.

Over the last few months, local bicycle shops have been inundated with customers — some new to the sport, others picking it up after a long hiatus. The pandemic has led to a national bicycle boom, along with shortages, as people eager to exercise outside or simply get out of the house have turned to cycling.

Stephen Ambruzs is the owner of Downshift Bikes and Brews, which is part bike shop and part cafe. While the cafe has struggled, experiencing a roughly 50% decrease in revenue during the pandemic, the cycle side has exploded, with an uptick in service and sales.

“We’ve seen a lot more people come in and buy bikes and also bring in their bikes from their basement that they haven’t used in forever to get a tuneup,” he said.

Ambruzs described the increased interest in biking as a pleasant surprise. The flurry of closures and cancellations in March worried him. Ambruzs said his first thought was that no one would be out shopping or dining and people would be conservative with their spending.

Ambruzs said he first noticed the increase in bike-related traffic at Downshift in April. Normally there’s a two- to four-day turnaround for service. The wait time first climbed to five to seven days and eventually to seven to 10 days.

Shortages are another indicator of the strong demand for bicycles. Ambruzs said he’s had to turn away many customers because the shop had no bikes to sell them.

“It seems that most if not every bike under $1,000 is gone from the face of the Earth right now,” he said.

Things slowed down a bit in the dead of summer because of the heat, which Ambruzs said is normal, but he anticipated the bike shop would be busy again in the fall when temperatures drop and leaves begin turning.

Downshift’s mission is to get more people out on bikes, Ambruzs said, whether for transportation, exercise or a fun family activity. So he’s thrilled to see people embracing the sport.

Christopher Heslin, owner of UnderDog Bikes in Roanoke, said he’s struggled to keep parts in stock. He can’t get a hold of parts he’d normally have 50 of in the back of the shop. He said he’s been forced to buy online from competitors instead of directly from distributors.

“It’s taking more time to source the parts for a bike sometimes than it does to actually repair it,” he said.

Some of that shortage is driven by people pulling old bikes that need repairs out from storage, Heslin believes. It can be particularly challenging to find the necessary parts to fix old bikes.

Like any other business owner, Heslin said, he initially wondered if UnderDog Bikes would survive the pandemic. But the shop was able to remain open, and it quickly became apparent that customers viewed bike shops as essential businesses.

Many families came in looking for bikes for their children, Heslin said, hopeful they could “pedal off some of that energy.” It made kids’ bikes worth their weight in gold when a shop could get them.

Normally UnderDog would have about 40 bikes on the sale floor, but recently Heslin said the shop had just eight while waiting for new inventory to arrive.

The most popular bike during the frenzied shopping period? Anything under $1,000, Heslin said.

Traditionally, UnderDog offers rentals, since it’s located right off the Roanoke River Greenway. This year, rentals were suspended due to COVID-19. But so many people wanted to purchase bikes, Heslin said, he ended up selling the rental fleet.

While the surge in cycling has been good for business, Heslin said he’s trying not to burn out his staff. Everything is taking a little bit longer with various safety precautions. The shop has kept its doors closed and is meeting customers outside.

In May, Gina Schauland started a Facebook group called We Bike for Fun. Her goal was to create a social media community for cyclists and encourage them to support local businesses through various challenges, like biking to a brewery or restaurant. The group has grown to 700 members.

Schauland, of Roanoke, said many of the members are new or revived cyclists who might post looking for advice or someone to ride with. Many share photos from their rides, which can also give newcomers ideas of routes to try.

Some are entirely new to the sport. Schauland said she recently met up with a woman whose friend was a member of the group in Fallon Park and taught her to ride a bike. Even if you haven’t ridden since childhood, Schauland said, the biking community is welcoming and willing to teach.

“I think because of the pandemic, people are turning to cycling as a fun way to get outside and connect with people,” she said.

Seager Wilson of Roanoke has logged about 1,000 miles since taking up biking in April.

He’s an avid runner but didn’t have much experience with cycling prior to the pandemic. But when his gym closed and Wilson was looking for a supplementary exercise option, he decided to give it a try.

Wilson searched for bikes on Facebook Marketplace. He messaged maybe eight to 10 people who had listed bikes for sale before finding one that was still available.

“People were just selling them as soon as they posted online,” Wilson said.

McLeod, who works for the League of American Bicyclists, said Roanoke has a lot of great places for cyclists to explore while maintaining distance from others. He’s seen people logging new or different routes on Strava, an exercise social media app.

McLeod said he didn’t see the bike boom coming as a reaction to the pandemic and believes the industry didn’t, either.

“But I think it makes a lot of sense given that people want to get outside and do something that’s more of an individual activity or small group activity that doesn’t involve a lot of bodily contact, and bicycling really does do that very well,” he said.

“We’ve definitely seen the crunch of an incredible turnout in not even just Roanoke, but we’ve had people driving in from New Jersey, people calling from as far away as California,” he said.

Though Cardinal’s traffic increased beginning in April, Jones said the shop didn’t really feel the squeeze until a few months ago since it tends to have a lot of back stock. But the most popular colors and sizes, along with entry-level bikes, are now hard to come by. He said the store has hundreds of bikes on back order.

Jones said he has a waiting list of about 50 people. When a bike shows up meeting their description, he gives the customer a call and typically it’s sold straight away. In normal times, he said, Cardinal doesn’t have a waiting list.

Bikes for younger riders — from elementary school-age children all the way up to those getting their first adult bikes — have been particularly popular, Jones said. They’re usually available for only a few hours before they’re snatched up.

Though demand is still incredibly high, Jones said customers now understand they might not walk out with a bike on the first try.

“Most of the customers we’re seeing now have called a dozen bike shops trying to find something. And they know what they’re in for when they get on the phone or when they pull into a parking lot,” he said. “They know there’s a shortage.”

But when the stars do align and Cardinal has the right bike for a customer, Jones said it makes the sale more special because the cyclist is so grateful.

While still on probation for stealing from a former Roanoke company, Melissa Rowe Dillon embezzled from two Roanoke County businesses that jointly paid her to be their office manager.

Roanoke will have an unexpected city council vacancy less than two months before the election for mayor and three other council seats.

The onset of the COVID-19 has accelerated the end of a private-sector economic revitalization project in the small city of Buena Vista.

WOYM: Villamont's roadside spring flows on, but is slaking fewer thirsts these days

Family says Roanoke man is dead after shooting in Vinton

Stephen Ambruzs, the owner of Downshift Bikes and Brews in Roanoke, said the bicycle business has exploded during the pandemic. “We’ve seen a lot more people come in and buy bikes,” Ambruzs said.

While the cafe at Downshift Bikes and Brews in Roanoke has struggled during the pandemic, experiencing a roughly 50% decrease in revenue, the cycle side has seen tremendous growth.

Ambruzs said he’s had to turn away customers because the shop had no bikes to sell them. In response, Downshift began purchasing used bikes to restore and sell, Ambruzs said. They’ve also done custom projects for clients, building to their specifications.