Co-owner Chris Linden in front of the Maroon Door restaurant and brewery set to open Oct. 30 at 11 a.m. 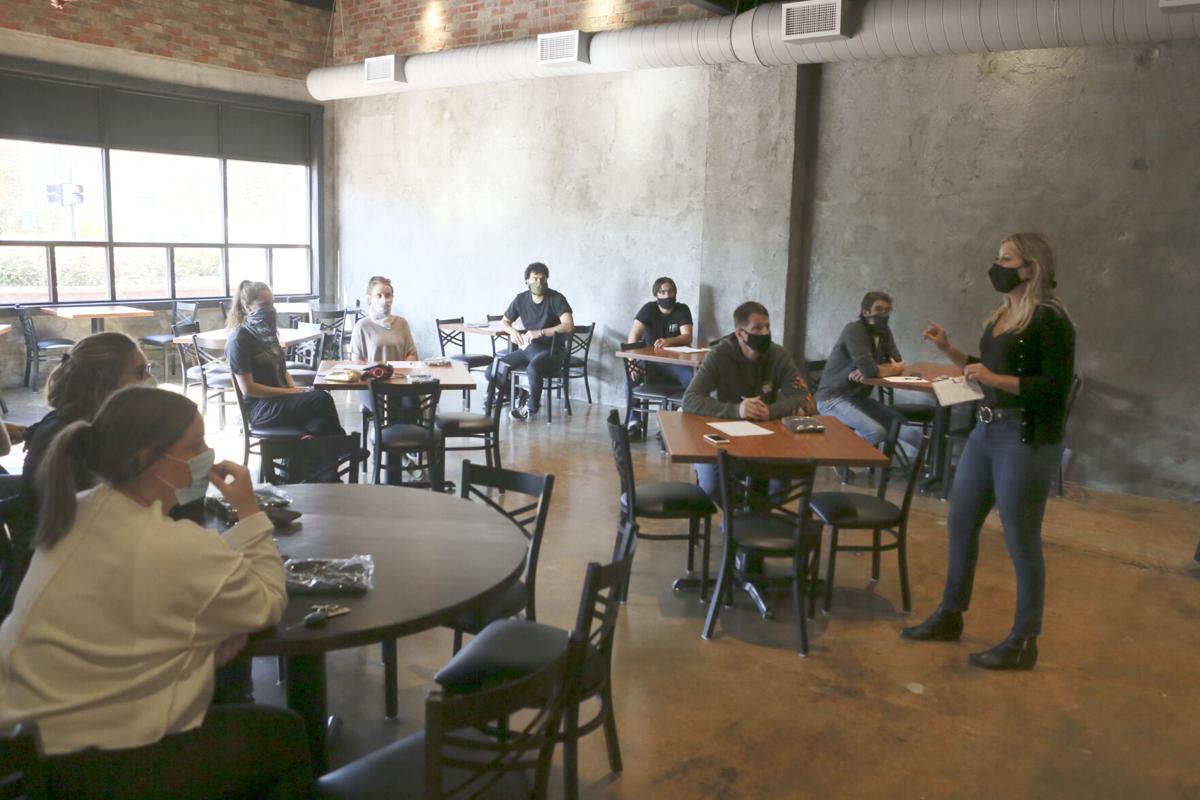 The new restaurant staff gathers for a meeting in the space formerly occupied by Mike’s Grill. The Maroon Door restaurant and brewery is set to open next Friday.

BLACKSBURG — Much of the community was dismayed when Mike’s Grill, a town staple, shuttered in 2016.

But Chris Linden, whose family has owned the property since the 1940s, was determined to not leave a gaping hole in a part of downtown known for its dining lineup.

On Oct. 30, The Maroon Door will host its grand opening, and the owners hope the renovated space brings back the life that turned the longtime restaurant property into such a nostalgic corner.

While the property has long been in Linden’s family, Mike’s Grill itself was separately owned and operated. Linden said he had been working on the new restaurant project for three years.

“It just kind of came together with my business partner,” Linden, the co-owner, said. “It’s something we were both passionate about, and something we felt the downtown community would need.”

Linden describes the new establishment as a gastro pub, which he said will serve typical pub fare “but up a notch a bit.”

The Maroon Door name comes from a literally maroon-colored door that Linden said was discovered during demolition.

The roughly 7,000-square-foot space occupies what was previously Mike’s Grill and the former laundromat portion of the now closed Cook’s Clean Center.

The new restaurant will serve craft beers with Off the Mall Brewing, which drew inspiration for its name from the nearby Alumni Mall.

Linden said the restaurant will launch with four craft beers of its own: an American classic India pale ale, a classic Bavarian Hefeweizen, an American pale ale and a Belgian ale.

One of the four beers will simply be called the Bavarian Hefeweizen while the rest will be named “New To You pale ale,” “the Show Stopper IPA” and the “Birthday Betty,” the last of which principal brewer Thomas Novario said is specifically a Belgian saison style.

Novario said he is looking forward to growing the craft beer menu. He said a dark beer and a hazy IPA will be on tap in the immediate future.

“I’m very happy to be working with these amazing people,” Novario said. “There’s been a lot of work, a lot of thought put into this.”

With its brewing operation, Maroon Door will add to the town’s steadily growing lineup of brewpubs and breweries.

The restaurant is tapping local talent on the kitchen side. The head chef, Brady Stevens, is coming from the Black Hen, another downtown Blacksburg eatery.

One of the meals is called Orville’s TD Burger, which Linden said will share similarities to an item that was served when his grandfather owned and operated a burger joint at the property decades ago.

The TD burger will be served on Texas toast and will consist of field greens, tomato, American cheese, grilled onions and garlic aioli. Linden said TD stands for “Tech delight.”

Linden said the restaurant plans to donate $1 from each sale of the TD burger to a local food bank. He said the business simply wants to give back to the community.

Additionally, the restaurant will employ a full-time pastry chef. Desserts will include smoked blackberry cobbler and a variety of house-made ice creams.

The property has been in Linden’s family since 1948, when his grandfather Orville Hamlin owned and operated an eatery called the Sportscenter. That restaurant remained in that spot until the 1960s, Linden said. Another establishment briefly operated at the property before the opening of Mike’s Grill in the 1970s.

Across four years, the church credit card was used 1,000 times for personal expenses of $83,473. That paid for groceries, a gym membership, utilities, hair appointments and other goods, prosecutors said.

Board Chairman Mike Wray said that he wants people to take COVID-19 seriously.

Even towing operators are telling Roanoke County's elected leaders that the county's current system of calling towing companies from a rotation when police need their services is not working.

The new program, which meets weekly, is coordinated by Cherie Dunford, a Pembroke chaplain who’s been training over the past year to become a facilitator and organizer with Living Free, a national faith-based nonprofit.

How to enroll in Carilion's COVID-19 antibody study

If you want to participate in Carilion Clinic's COVID-19 antibody study, fill out the survey questions online, or contact Carilion's Research and Development team at research@carilionclinic.org.

Sooner or later, the 45th president of the United States will be looking for a spot to establish his historical legacy. Why not the land off the Blue Ridge Parkway we now call Explore Park?

Blacksburg Town Council is considering an ordinance that would prohibit the general public from carrying guns in town buildings and streets when they are used for events, among other places.

On Nov. 1, the seven-day moving average in Virginia for hospital patients with the virus was just above 1,000. By mid-month it has climbed to 1,250, and within 10 days it stood at 1,516. That was Wednesday, Thanksgiving Eve, the day when all across the state and country people ignored public health warnings and traveled to spend the holiday with families.

Prosecutors said a tenant at a Roanoke apartment complex was taking her garbage to a trash disposal room when Cunningham threatened her and forced her to perform a sexual act.

The state’s reported COVID-19 cases more than doubled from Friday to Saturday, the Virginia Department of Health reports.

Co-owner Chris Linden in front of the Maroon Door restaurant and brewery set to open Oct. 30 at 11 a.m.

The new restaurant staff gathers for a meeting in the space formerly occupied by Mike’s Grill. The Maroon Door restaurant and brewery is set to open next Friday.