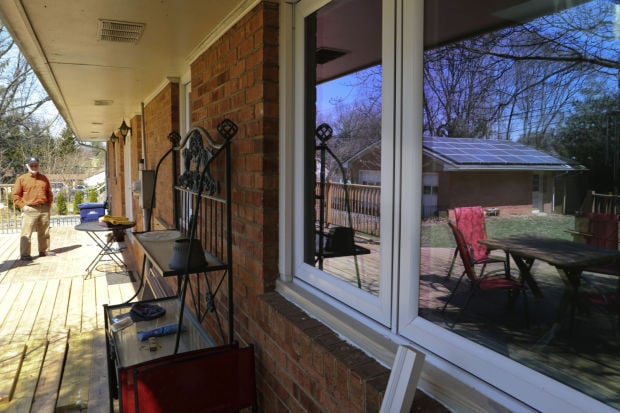 John Randolph stands on the back deck of his Blacksburg home as energy efficient windows reflect the images of his garage roof covered with solar panels. 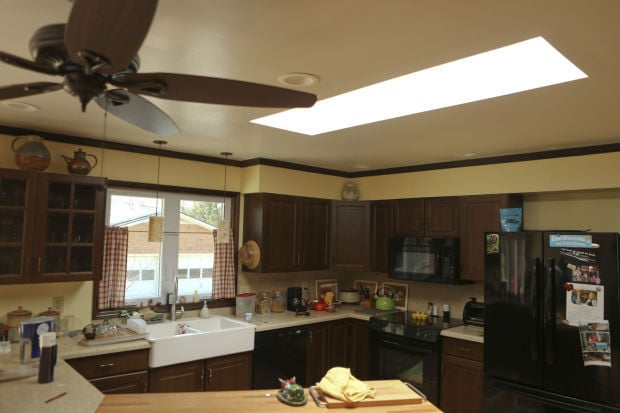 A skylight illuminates the kitchen of John Randolph’s home in Blacksburg recently. His home also has energy-efficient windows and solar energy. The system has generated about $2,000 worth of electricity since it was installed three years ago. 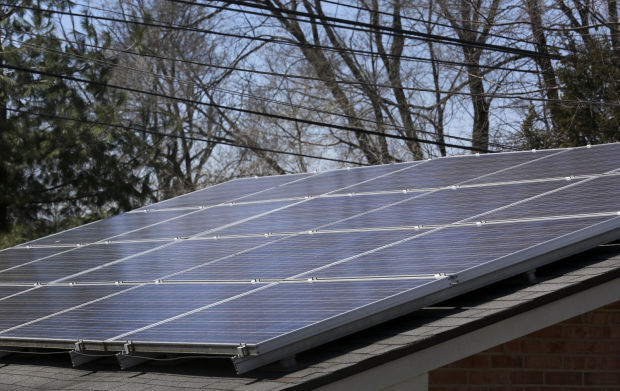 Solar panels are attached to the garage roof in the back yard of John Randolph's Blacksburg property. 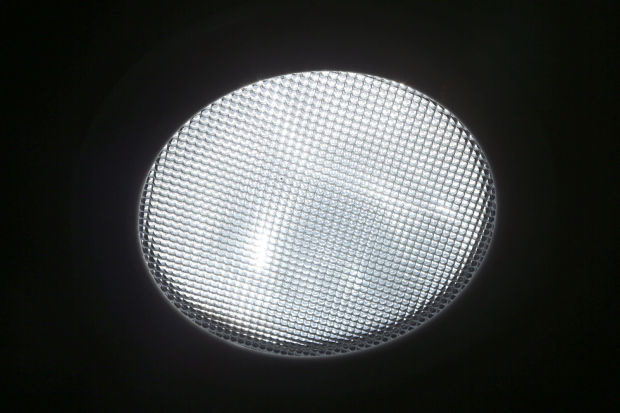 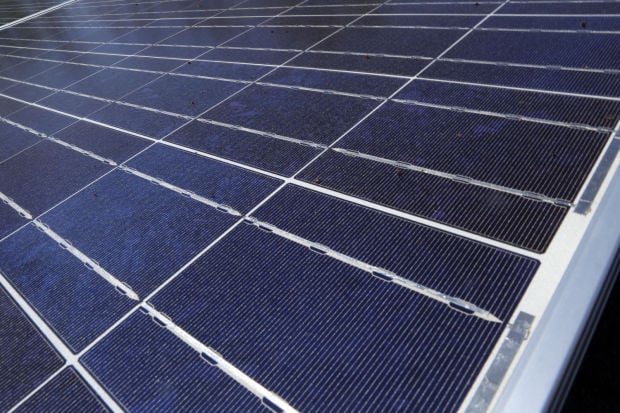 Solar panels are attached to the garage roof of John Randolph’s home in Blacksburg. 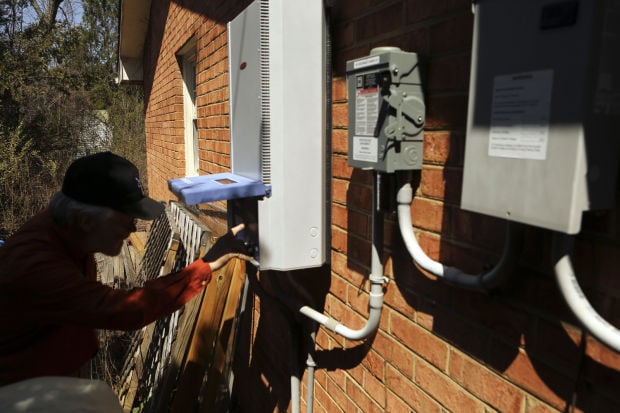 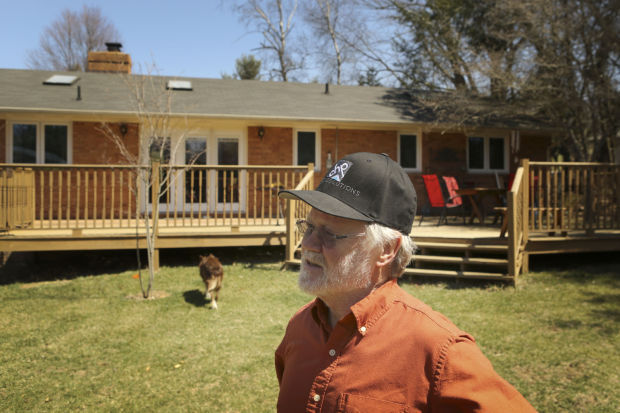 John Randolph (left) stands in the backyard of his Blacksburg home last week. The home is adorned with energy efficient windows, sky lights, and solar energy.

BLACKSBURG — A few days after Jana and Steve Doyle signed a contract and became the first participants in the new Solarize Blacksburg initiative, electricity rates went up by 3.5 percent.

The 12 solar panels soon to be installed on the Doyles’ roof under that contract will help insulate them from similar increases in the long term, and save them an estimated $60 a month on their power bill in the short term, Steve Doyle said.

“We’ve talked about this for years,” Doyle said of installing solar power.

But it was the reduced cost offered through the solarize program that persuaded the family to do it now, he said. “I think it’s a great thing for Blacksburg because energy prices are just getting more expensive.”

The panels won’t just save them money, though. They might even generate a little income.

Solar system owners usually qualify for renewable energy certificates, which traditional utilities in other states are eager to buy for an annual fee to offset their own energy use.

Doyle said his family’s system is likely to qualify for about four certificates, which could each fetch $50 to $200 a year.

CHP, along with the town of Blacksburg, is administering the program. Emeritus Virginia Tech professor John Randolph and Beth Lohman of the Virginia Department of Environmental Quality also helped shape and launch the initiative.

The first solarize project began in Portland, Ore., in 2009, Cavell said. Then it moved to other areas of the country, including Asheville, N.C.

More than 230 people have signed up online since Blacksburg kicked off its program last month, according to town Sustainability Manager Carol Davis. Of those, about 165 sites around town are thought to be appropriate for solar power.

It works like this: If a site looks promising, one of two local solar installers working with the program will do a thorough assessment and provide an estimate for a system to meet the homeowner’s needs. The town and CHP will provide information to the homeowners on the federal tax credit, financing for their systems and other details. Once several installation contracts have been signed, the installers will make a bulk order for equipment and begin constructing decentralized renewable power across town.

The initiative leverages the tax credit and several discounts and efficiencies to reduce the cost of a 3 kilowatt to 5-kilowatt residential solar system by about 15 percent, Cavell said.

One key component of the initiative is the dramatic drop in solar panel prices over the past few years as China has ramped up its production, Cavell said. So payback on solar systems takes less time, increasing savings. A 3-kilowatt system of panels is estimated to cost the average homeowner just over $7,000, under the program. The same system without the discounts would cost about $11,000.

It’s all meant to reduce the need for fossil fuel-based electricity, which is a “key strategy in the town’s climate action plan and in the New River Valley Livability Initiative,” Davis said.

Both Blacksburg and Virginia Tech have committed to dramatic long-term reductions in greenhouse gas emissions, and each is working on action plans to accomplish that. Increasing solar power is one way to help get there.

Randolph, who teaches energy planning at Tech and works as a renewable-energy consultant, was an early adopter of solar power.

The system at his Blacksburg house has generated about $2,000 worth of electricity since it was installed three years ago, according to the tracking system Randolph demonstrated Wednesday.

Randolph’s February-March electric bill totalled $60 for his 1,700-square-foot house. For three months over the past year, the bill showed a negative electricity use, meaning Randolph produced an excess that was served to the grid.

Solarize Blacksburg is expected to help with another town-Tech sustainability project — a national competition for the Georgetown University Energy Prize. The competition is meant to spur innovation in pursuing energy efficiency in towns and small cities across the U.S. by awarding a $5 million prize to the locality that reduces its energy consumption most over two years. The prize will be awarded in 2017, and Blacksburg, with help from Tech’s Institute for Critical Technology and Applied Science, is applying.

The competition could create a “ ‘living laboratory’ made up of the town and university,” according to Dennis Grove, ICTAS program manager for sustainable energy and water.

“Interest has been expressed by researchers from behavioral sciences to data visualization to energy technologies,” Grove wrote.

Such research could help increase the amount of renewable energy sources nationwide to help slow human-caused climate change. Currently, alternative power remains a small part of the energy production across America, and is an even smaller part of Virginia’s energy mix.

In January, solar accounted for less than 1 percent of total U.S. electric generation capacity. Wind made up just over 5 percent, and hydroelectric power accounted for just over 8 percent, according to the U.S. Office of Energy Projects Energy Infrastructure Update report.

In Virginia, the numbers are lower.

One reason for the lag in Virginia is that the state offers few incentives for alternative energy, and its policies are less friendly than those in other states.

“We rank 39th in solar policies and 37th in efficiency policies,” Randolph said.

But projects like Solarize Blacksburg are a bright spot.

“If we can do this here, we can do it anywhere,” Randolph said.

Appalachian is a subsidiary of American Electric Power that serves about a million customers in parts of Virginia, West Virginia and Tennessee.

The net metering program in Virginia is regulated by the State Corporation Commission. It enables regular electric utility customers to install an alternative system of up to 20 kilowatts of generating capacity for residential and 500 kilowatts for nonresidential. Those customers can then interconnect with the utility and receive credit on their power bills for excess electricity, which is fed into the grid and distributed to other customers.

Jones said Appalachian applauds programs like Solarize Blacksburg that seek to make solar power affordable for homeowners. And the company has met with the solarize group to answer questions, he said.

Net metering and alternative energy sources are “just all part of the evolving landscape of energy production and delivery,” Jones said.

Under current regulations, private renewable energy growth is limited in Virginia, however.

Renewable generation is capped under net metering in a certain utility service area at 1 percent of the utility’s adjusted peak load forecast for the previous year.

Some other states have higher caps, Randolph said. But Virginia is today no where near maxing out its relatively low cap.

“Currently, in APCO’s service area, less than 10 percent of its 1 percent renewable net-metered cap is used,” Randolph said. “So the existing net-metered capacity could be increased by 10 times and still be within the cap.”

Number of people who have signed up online for an assessment

Sites that look suitable based on satellite images

Number of other Virginia communities (Richmond, Charlottesville, Floyd and Roanoke) that have expressed interest in starting a solarize initiative

The entire 356 acres of the property including more than 3 miles of lake frontage will be offered in the auction.

John Randolph stands on the back deck of his Blacksburg home as energy efficient windows reflect the images of his garage roof covered with solar panels.

A skylight illuminates the kitchen of John Randolph’s home in Blacksburg recently. His home also has energy-efficient windows and solar energy. The system has generated about $2,000 worth of electricity since it was installed three years ago.

Solar panels are attached to the garage roof in the back yard of John Randolph's Blacksburg property.

Solar panels are attached to the garage roof of John Randolph’s home in Blacksburg.

John Randolph (left) stands in the backyard of his Blacksburg home last week. The home is adorned with energy efficient windows, sky lights, and solar energy.