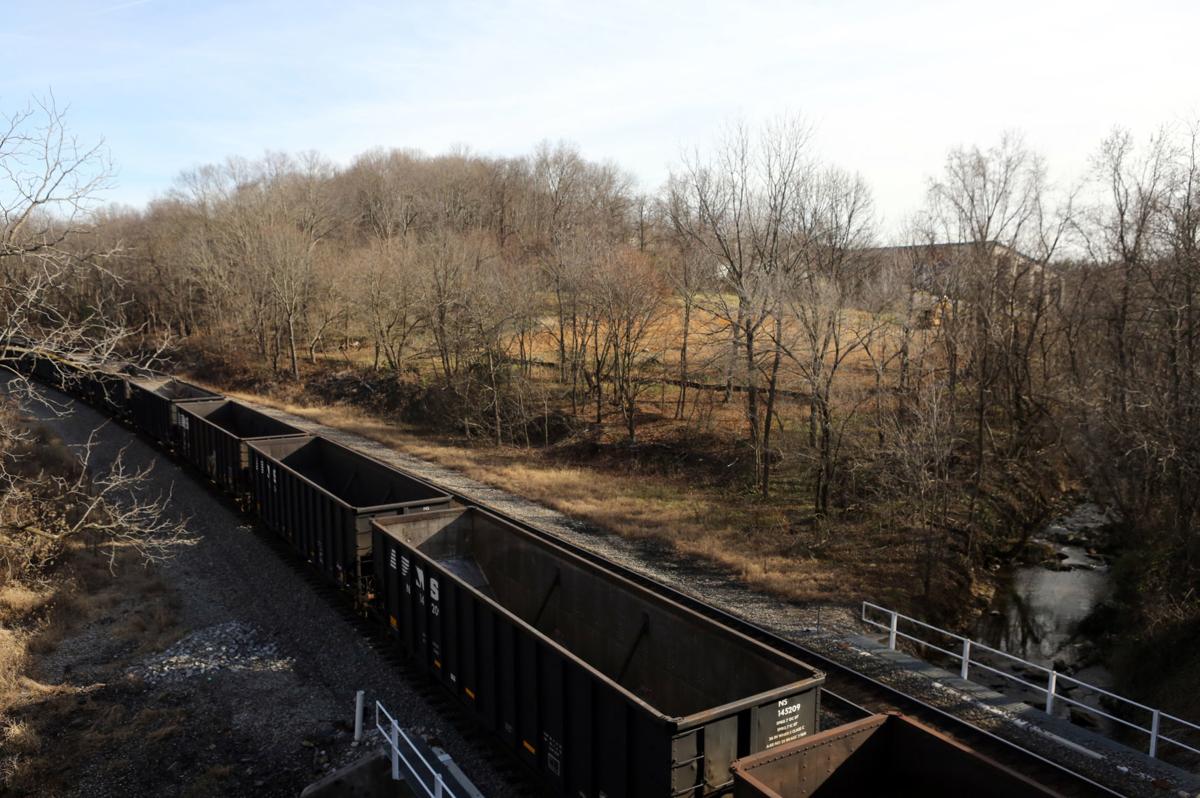 A train passes Thursday at the site of a proposed passenger rail station near the Christiansburg Aquatic Center off North Franklin Street.

A conceptual image of the proposed Christiansburg train station site configuration has been presented by NRV Rail 2020. The Christiansburg Aquatic Center is located top right. 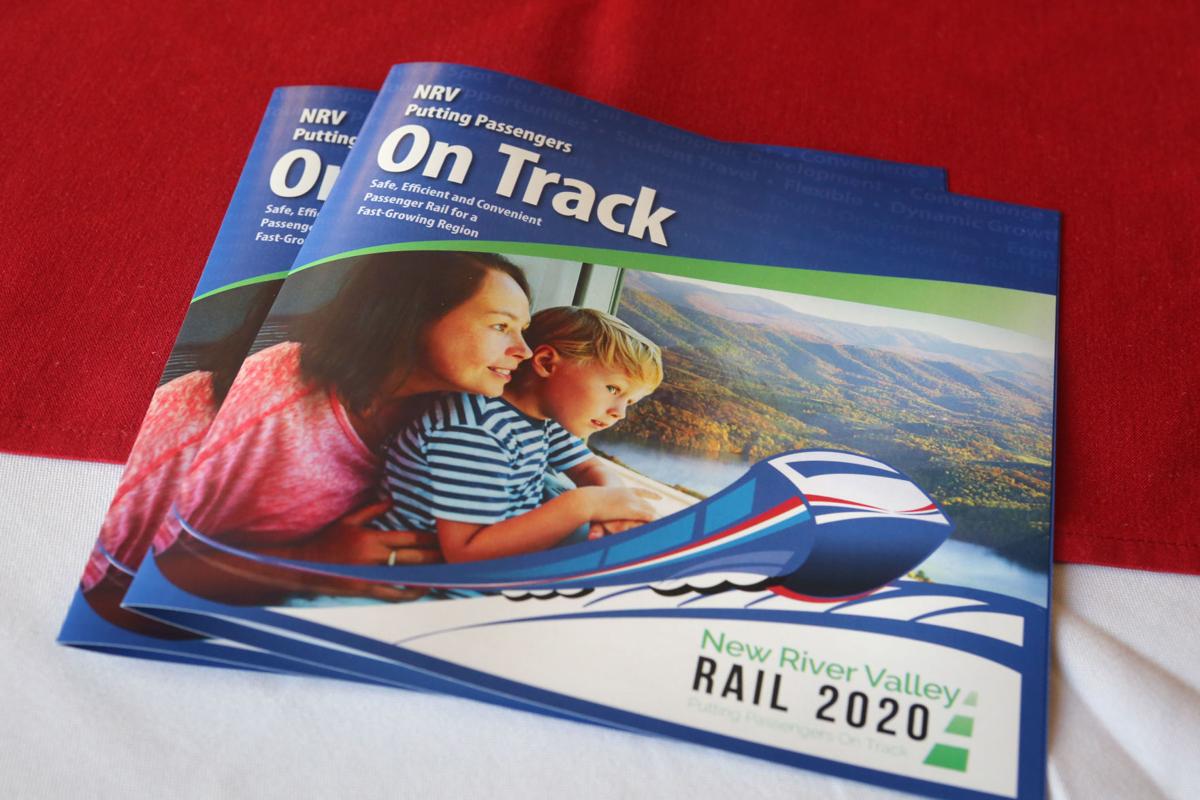 A brochure espousing the benefits of train travel has been distributed by New River Valley Rail 2020.

CHRISTIANSBURG — A $350,000 study that intends to determine what improvements are needed to bring Amtrak service to the New River Valley has been placed on indefinite hold.

Officials with the Virginia Department of Rail and Public Transportation said this past week that Norfolk Southern has halted its involvement in the study due to the company wanting to prioritize other matters related to its rail network.

The railroad recently announced plans to move its headquarters to Atlanta.

Although the NRV study doesn’t solely depend on Norfolk Southern, the railroad’s cooperation is needed because one major element being examined is some tracks near the Christiansburg Aquatic Center that belong to the Norfolk-based company, DRPT officials said.

People involved with the New River Valley Rail 2020 group have for some time now selected the area around the aquatic center as the spot for an Amtrak station.

“The track is owned by Norfolk Southern … and they have told us that they are reluctant to talk to us now about extending passenger rail due to problems in their freight network, especially south of Virginia,” Michael McLaughlin, DRPT’s chief of rail transportation, said. “And they want time to fix those freight problems before they have a discussion with us about adding passenger service.”

McLaughlin said Norfolk Southern is undergoing some management changes and is considering the adoption of the precision railroading system. He didn’t go into more detail.

Norfolk Southern officials didn’t respond to a request for comment.

The study was approved by the General Assembly, which made the money for the study available on July 1.

The stalling of the study doesn’t necessarily derail plans to bring Amtrak to the New River Valley, but the study is a crucial part of that process, said McLaughlin, echoing a similar comment from NRV 2020.

“We would need Norfolk Southern’s support and cooperation to do it,” McLauglin said, but “that doesn’t mean we’re just going to let the study sit.”

McLaughlin said his agency is in regular talks with Norfolk Southern about extending passenger rail.

“We’re going to stay positive, regardless,” Hincker said. “The good news is there’s increasing demand for passenger rail in all parts of this country. The Roanoke service is very, very successful. Even though there’s a delay right now in respects to the operational study, we remain hopeful that it’s going to come to pass.”

McLaughlin said DRPT is looking for a “win, win” as it supports extending passenger rail but also exists to represent freight rail.

“I think it’s fair to say there is some frustration,” he said.

Hincker said any study on the establishment of passenger rail in the New River Valley almost certainly requires the involvement of Norfolk Southern due to the company’s dominance of rail lines in the region.

“Again, I don’t know if they can do it without Norfolk Southern, but certainly someone needs to take a look at the track, and what needs to be done to get to the next step,” he said.

The campaign to extend passenger rail to the New River Valley grew out of several regional objectives, including hopes to augment the recently added Amtrak service in Roanoke.

The campaign touts passenger rail as an alternative to Interstate 81 for New River Valley residents traveling toward Washington, D.C. Among those potential travelers are Virginia Tech and Radford University students, many of whom are not native to Southwest Virginia.

NRV 2020 also views rail as another tool for fueling economic growth in Montgomery County, already one of the most rapidly growing localities in Virginia.

The site near the aquatic center was chosen because current passenger rail demands in the New River Valley primarily come from that exact part of the region, Hincker said.

“The people are coming from the northern and western end of Montgomery County, which is basically Christiansburg and Blacksburg,” he said.

Before settling on the Christiansburg site, the campaign did look at Radford and another area just across the road from the aquatic center, Hincker said.

The Radford site that was considered, Hincker said, was the most ideal due, in part, to its flat and kinder terrain and the fact that a rail station once existed there. The problem is Radford is located on the wrong side of where the New River Valley’s core riders live, he said.

If Radford was located north, and essentially followed the Amtrak route’s direction, placing a station there would make sense, Hincker said.

“But Radford’s south,” he said.

Even if the possibility of passenger rail is still many years away, the town of Christiansburg is securing land near the aquatic center to prepare for a station.

The town has bought 1.2 acres for $160,000 and is in agreement to buy another 9.3 acres for $200,000 from the Christiansburg-based affordable housing group Community Housing Partners.

The ultimate plan is to use the land for station access and parking, but the town in the meantime will use at least some of the space for extra aquatic center parking.

Christiansburg Mayor Mike Barber said he’s not terribly concerned with the town’s recent spending on the land because the lots aren’t expected to go to waste.

“It will get built when it gets built,” Barber said about the station. “We kind of have to play in their court for a little while because they got the only track access around.”

Barber said he still supports the mission suggested by NRV 2020, which is ideally to begin setting up a rail station sometime in the next two years. He said a timeline goal was needed to ensure that the proper effort went into the campaign.

State approves $300,000 for study of Amtrak stop in Bedford

Plans to make Bedford a scheduled stop for Amtrak trains travelling between Lynchburg and Roanoke still are on track following a state board’s decision to pay for a study on a Bedford stop.

A train passes Thursday at the site of a proposed passenger rail station near the Christiansburg Aquatic Center off North Franklin Street.

A conceptual image of the proposed Christiansburg train station site configuration has been presented by NRV Rail 2020. The Christiansburg Aquatic Center is located top right.

A brochure espousing the benefits of train travel has been distributed by New River Valley Rail 2020.