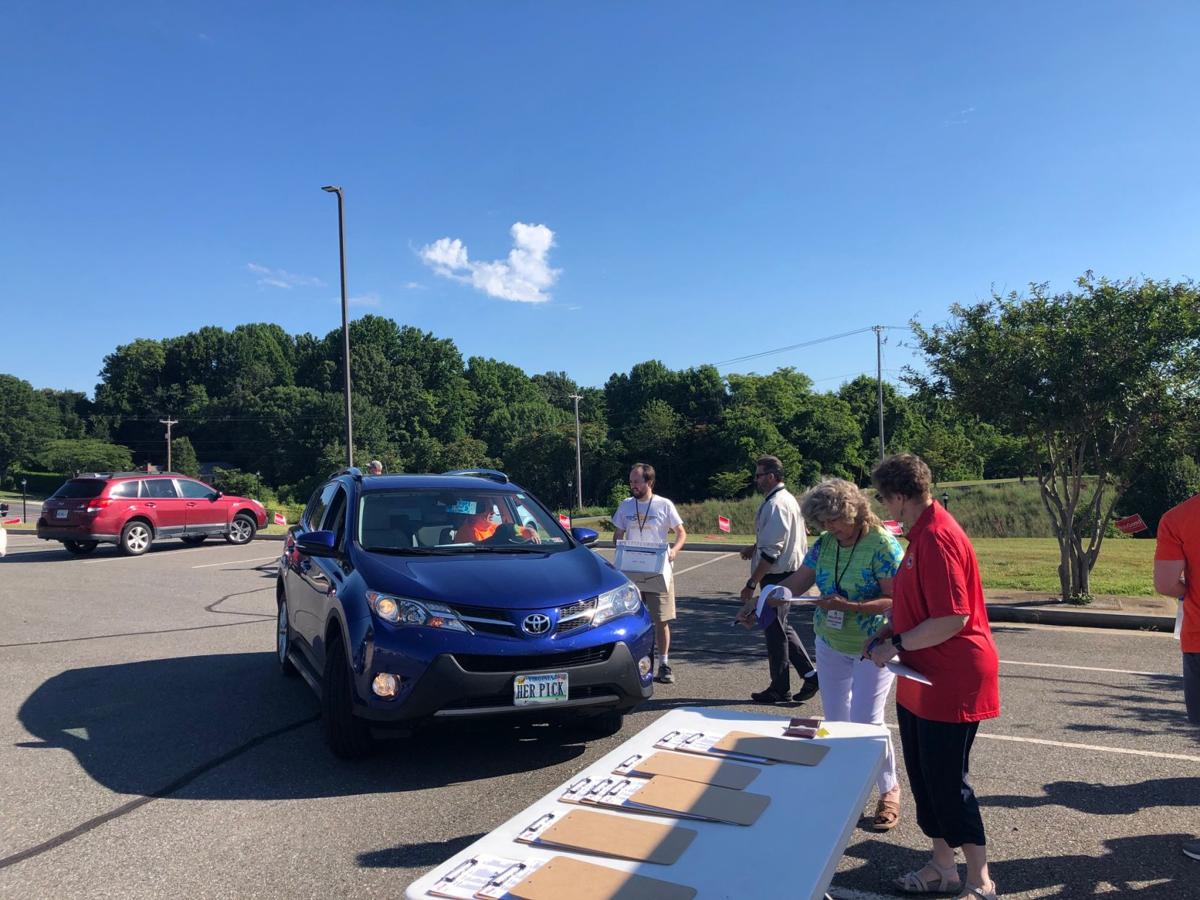 A delegate drives through a line to cast a ballot at the 5th Congressional District Republican convention on Saturday. 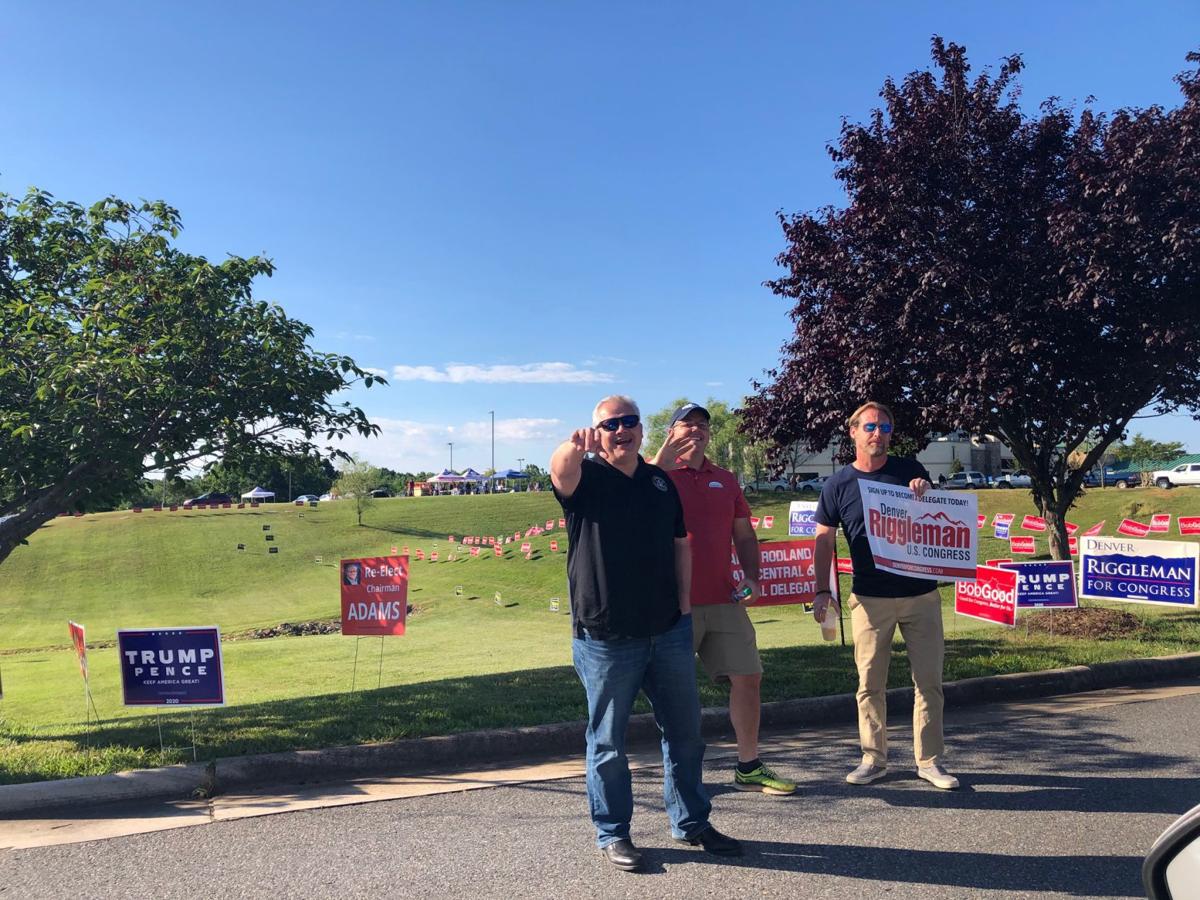 Rep. Denver Riggleman, R-Nelson, greets delegates as they pull into the Tree of Life Ministries in Campbell County for the 5th Congressional District Republican convention on Saturday. 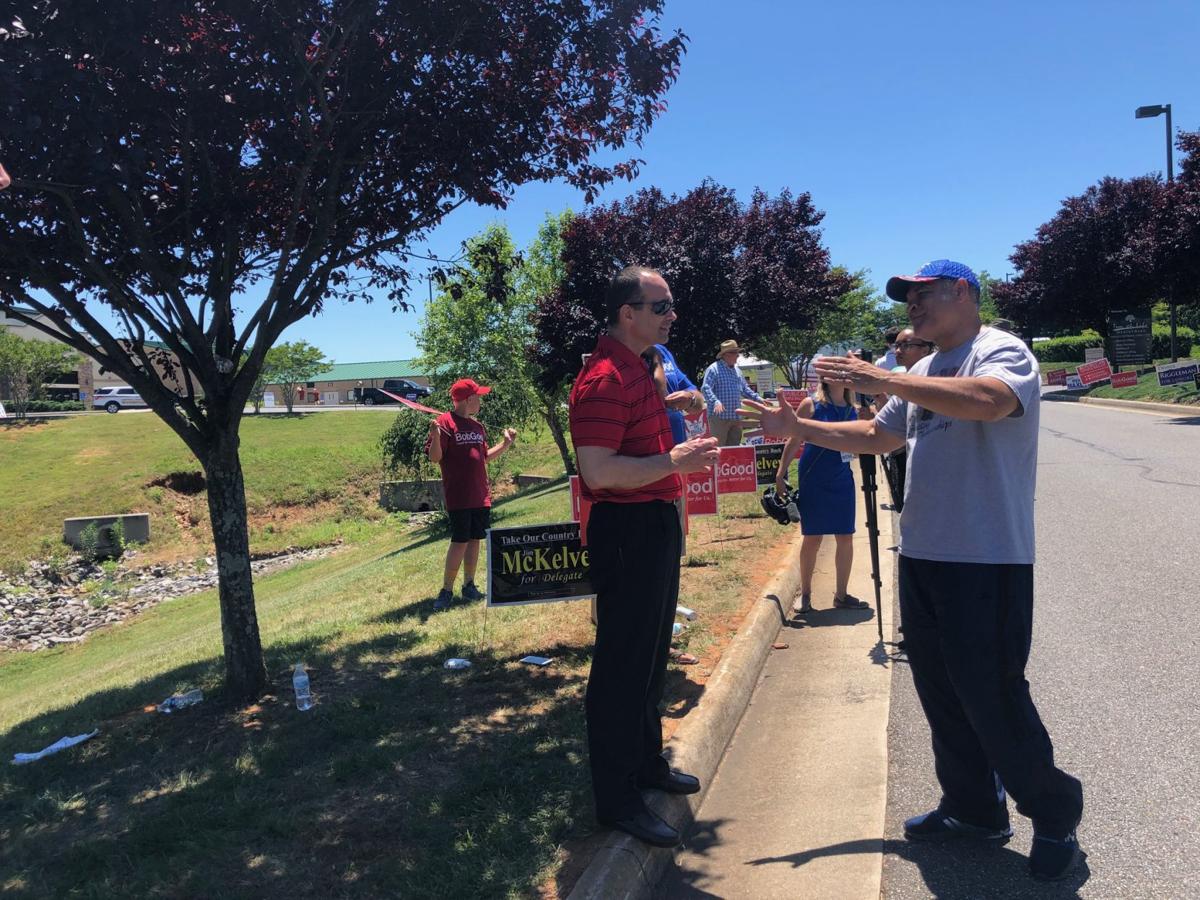 Bob Good talks to a convention volunteer on Saturday. 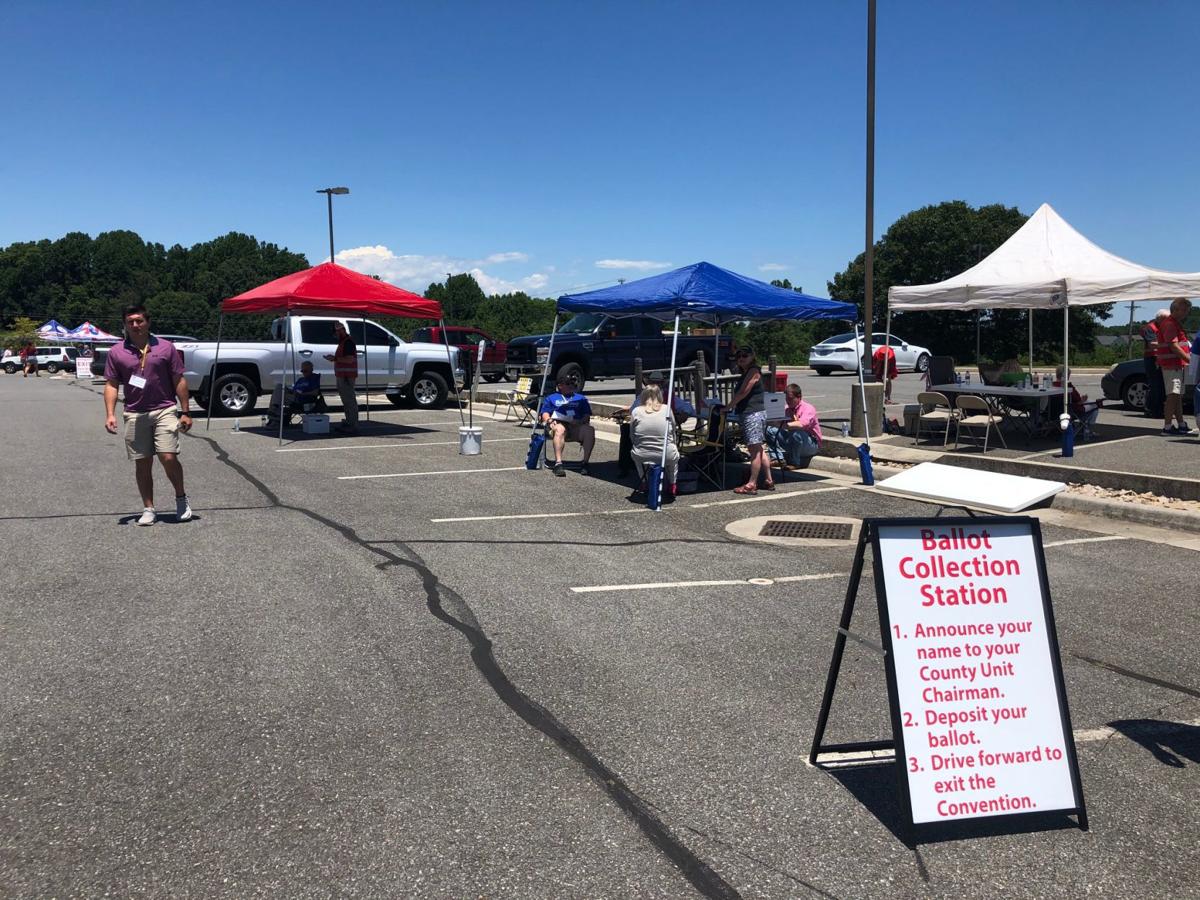 Delegates drove around a church parking lot in Campbell County to vote in a convention on Saturday. Here’s a tent where they dropped off their completed ballots. 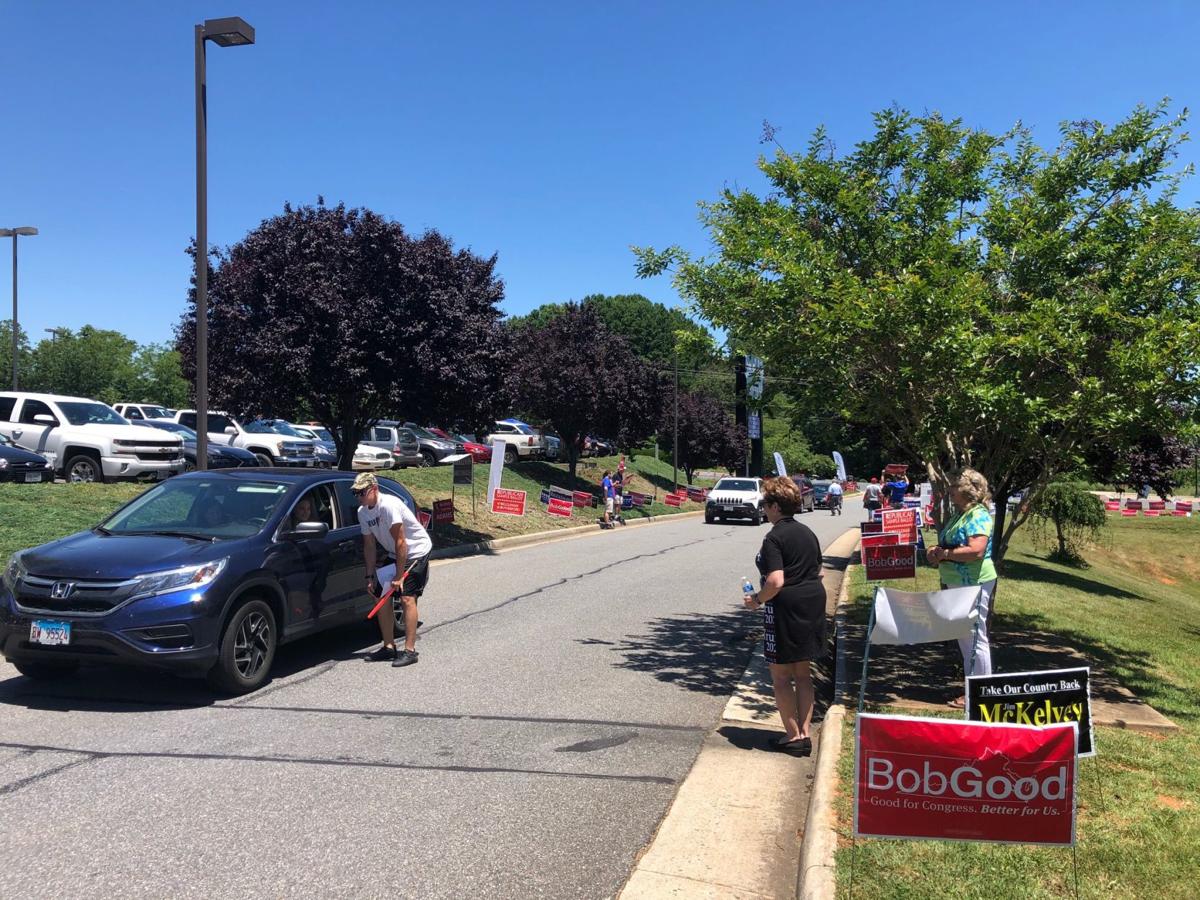 Delegates pull into the Tree of Life Ministries parking lot to vote in the 5th Congressional District convention on Saturday. 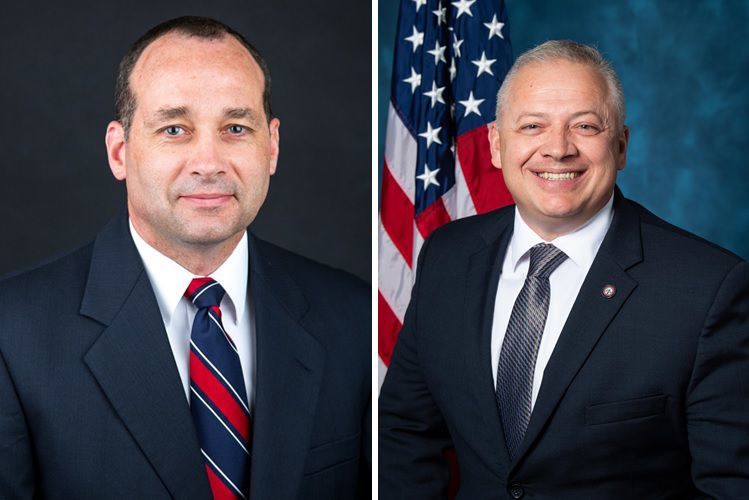 That message motivated his supporters to line up to vote for him at a drive-thru convention on Saturday to win the Republican nomination in the 5th Congressional District. He defeated Riggleman, whom President Donald Trump and Jerry Falwell Jr. had endorsed, with 58% of the vote. After more than 10 hours of voting at Tree of Life Ministries in Campbell County, 2,437 delegates cast ballots.

“We look forward to making the district bright red again,” Good said. “This is a strong, conservative 5th District.”

Good, a former Campbell County supervisor and Liberty University employee, has identified as a “bright red Biblical and constitutional conservative.” He said early Sunday morning after results were announced that he looked forward to going to Congress to “emphasize our Judeo-Christian principles upon which our nation was founded.”

“We have a statesman who’s going to go to D.C., and he’s going to act not on opinion polls, but on Biblical principle,” said Charla Bansley, a Good supporter and Bedford County supervisor.

Good and Riggleman, who runs Silverback Distillery with his wife, faced off at an unusual drive-thru convention that had to be used as an alternative to an indoor event because of the coronavirus pandemic. The convention, from its lead-up through the counting of the ballots, was mired in controversy. Riggleman had supported using a primary, which would have been more favorable to him if more voters across the Republican spectrum participated.

“Republican Party activists did everything they could to structure this process so Congressman Riggleman would lose,” Stephen Farnsworth, a political scientist at the University of Mary Washington, said Sunday.

At various points throughout the day, people waited more than an hour-and-a-half in a line of cars to vote. Some people left without voting. Convention volunteers a few times directed people to a specific line, and then informed the voters after a long wait that they were in the wrong line, causing them to get at the end of the line and wait again to vote.

“When you require people to drive several hours to cast a ballot, it shouldn’t surprise you the most extreme people will do so,” Farnsworth said.

Lawyers for Riggleman tried to have the entire box of Campbell County ballots tossed from consideration, said Melvin Adams, chairman of the 5th Congressional District GOP Committee. He wrote in an email to the committee that there appeared to be an issue with one ballot that seemed to be fraudulently cast and another issue with the list of Campbell County delegates who voted and the number of ballots counted. Adams wrote that a committee tasked with making decisions on these unanticipated problems was given authority to decide what to do, and it decided to have all the ballots counted.

Riggleman tweeted Saturday night that his campaign was “evaluating all our options at this time.” An attempt to reach Riggleman on Sunday went unanswered.

Riggleman’s libertarian swagger wounded him. The way he acted on and sharply defended his positions bothered social conservatives. And while Riggleman’s supporters said they liked that about him, some also said they worried it would come back to bite him.

One of the final episodes of that came during a recent interview with The Roanoke Times. When asked if he would change his positions or how he voted to appease those who were working so hard to defeat him, he said, “Not a damn thing.” Party activists brought up his response a lot in the week leading up to the convention.

Social conservatives struggled to accept Riggleman after he won the nomination two years ago. That year, Rep. Tom Garrett, R-Buckingham, suddenly ceased his re-election bid due to his struggle with alcoholism. About three dozen people who sit on the GOP congressional committee chose the nominee, and Riggleman won by one vote. The person who came in second place, Cynthia Dunbar, is a religious conservative like Good and attended Good’s victory party Saturday night.

Good pointed to that event as an early sign that Riggleman didn’t have strong support from conservatives.

“He’s out of touch with the conservative base of this district,” Good said in an interview last month.

Last summer, Riggleman officiated a same-sex wedding for two young men who volunteered on his campaign. Good considered that, and Riggleman’s defense and dare for someone to challenge him over it, a slap in the face to conservatives.

At the convention, Riggleman and the couple stood on one side of the road greeting arriving delegates. Good stood on the other side of the road. Some Good supporters complained about a Riggleman sign that said to “vote Christian values” because they felt that conflicted with him officiating a gay wedding.

Good will face the winner of the June 23 Democratic primary. The candidates are Roger Dean Huffstetler, a Charlottesville entrepreneur who lost the Democratic nomination for the same seat two years ago; John Lesinski, a former Rappahannock County supervisor; Claire Russo, a Marine veteran from Albemarle County; and Cameron Webb, director of health policy and equity at the University of Virginia.

By Sunday, political analysts at Cook Political Report and “Crystal Ball” at the University of Virginia’s Center of Politics had moved the race from likely Republican to lean Republican. It’ll still be a tough fight for the Democratic nominee in the largely rural district that spans from Fauquier County to the North Carolina border and includes Franklin County and part of Bedford County.

The Democratic candidates have already been casting Good as an “extremist.”

“The time I spent serving in Afghanistan made it clear to me how dangerous it is when we let extremists and zealots take control of the government,” Russo said. “Bob Good wants to go to Congress to champion his extremist agenda, not working families.”

“My campaign is about everyone, which is why I’ll fight for every family in the 5th District to have a place in a more prosperous, inclusive future,” Huffstetler said. “I look forward to debating Bob and having voters compare our message of inclusion and economic empowerment against his message of division and ideological extremism.”

Following his win, Good needs to resolve a problem with his failure to file his candidate qualification paperwork to the Virginia Department of Elections before the June 9 deadline. He filed it on Friday.

There has been concern about whether this could result in his name being left off the November ballot, triggering nightmares of how Del. Nick Freitas, R-Culpeper, made that mistake last year and had to run a write-in campaign. Good’s team has been reassuring people they are confident the Board of Elections will grant him an extension.

The Republican Party of Virginia has requested the deadline be extended, arguing the deadline is usually the day the state-run primary is held.

Gov. Ralph Northam delayed the primary until June 23 because of the pandemic, but other deadlines weren’t postponed along with it.

The Board of Elections meets July 7.

Democratic voters will head to the polls on Tuesday to pick their congressional nominee in what suddenly became an open seat in central Virginia.

Cameron Webb emerged the winner of a four-way competition to determine the Democratic nominee for the open congressional race in central Virginia.

LYNCHBURG — Rep. Denver Riggleman, a first-term Republican from Nelson County, whose libertarian views and decision to officiate a same-sex ma…

Central Virginia Republicans will decide in a week whether to stick with Rep. Denver Riggleman, whose libertarian swagger has agitated some ac…

A small number of Republicans on a congressional district committee tried to censure Rep. Denver Riggleman because he officiated a same-sex ma…

A delegate drives through a line to cast a ballot at the 5th Congressional District Republican convention on Saturday.

Rep. Denver Riggleman, R-Nelson, greets delegates as they pull into the Tree of Life Ministries in Campbell County for the 5th Congressional District Republican convention on Saturday.

Bob Good talks to a convention volunteer on Saturday.

Delegates drove around a church parking lot in Campbell County to vote in a convention on Saturday. Here’s a tent where they dropped off their completed ballots.

Delegates pull into the Tree of Life Ministries parking lot to vote in the 5th Congressional District convention on Saturday.