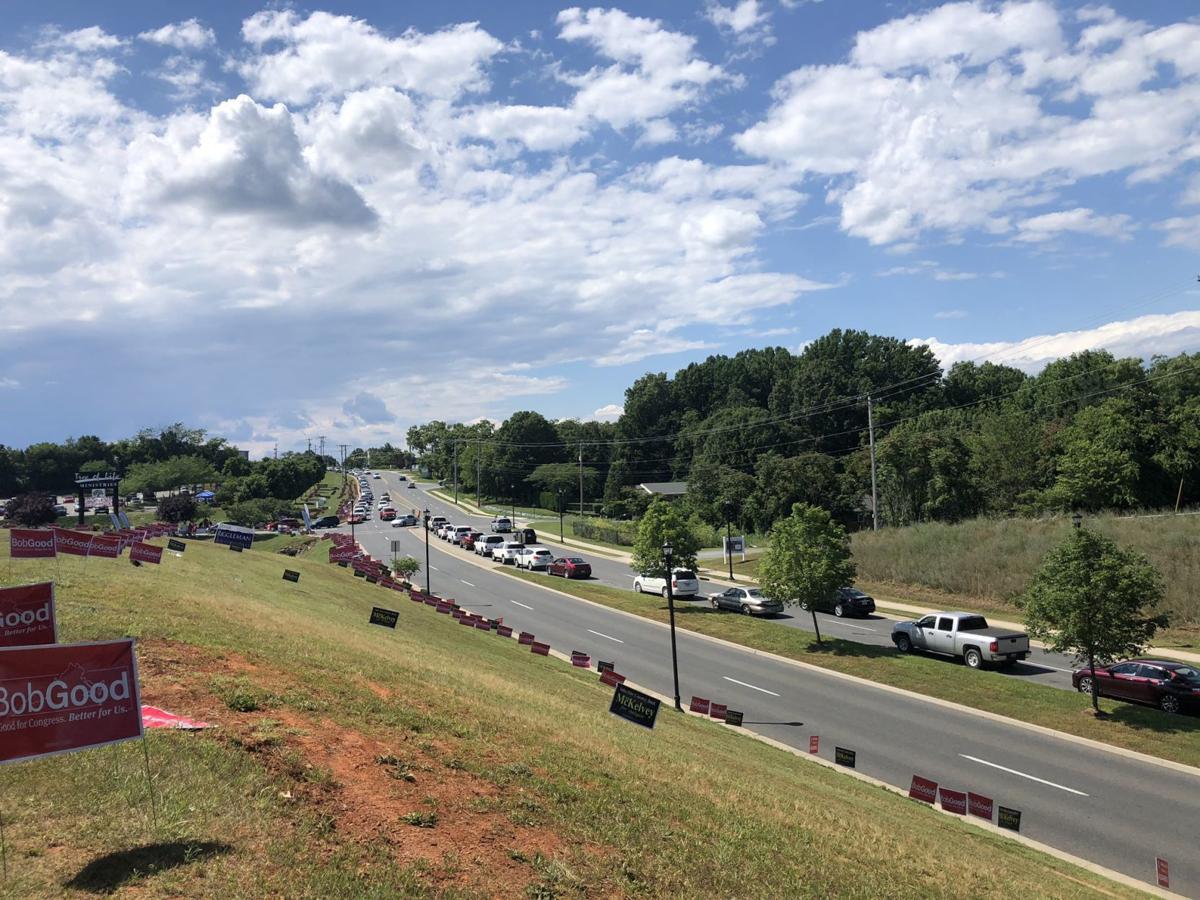 Vehicles waiting to turn into Tree of Life Ministries on Greenview Drive in Campbell County just outside Lynchbug at mid-Saturday afternoon. Republians are using a drive-thru voting method to choose their nominee because of the coronavirus pandemic. 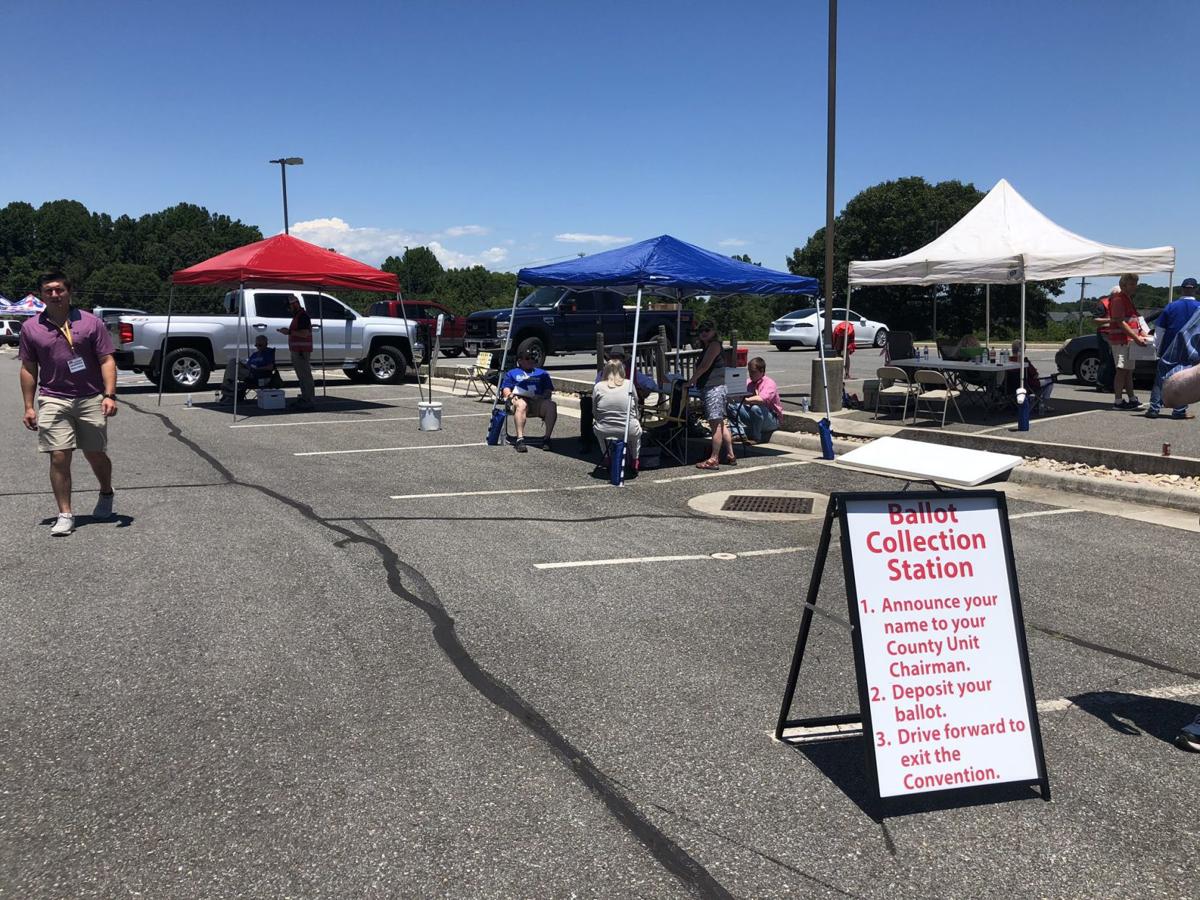 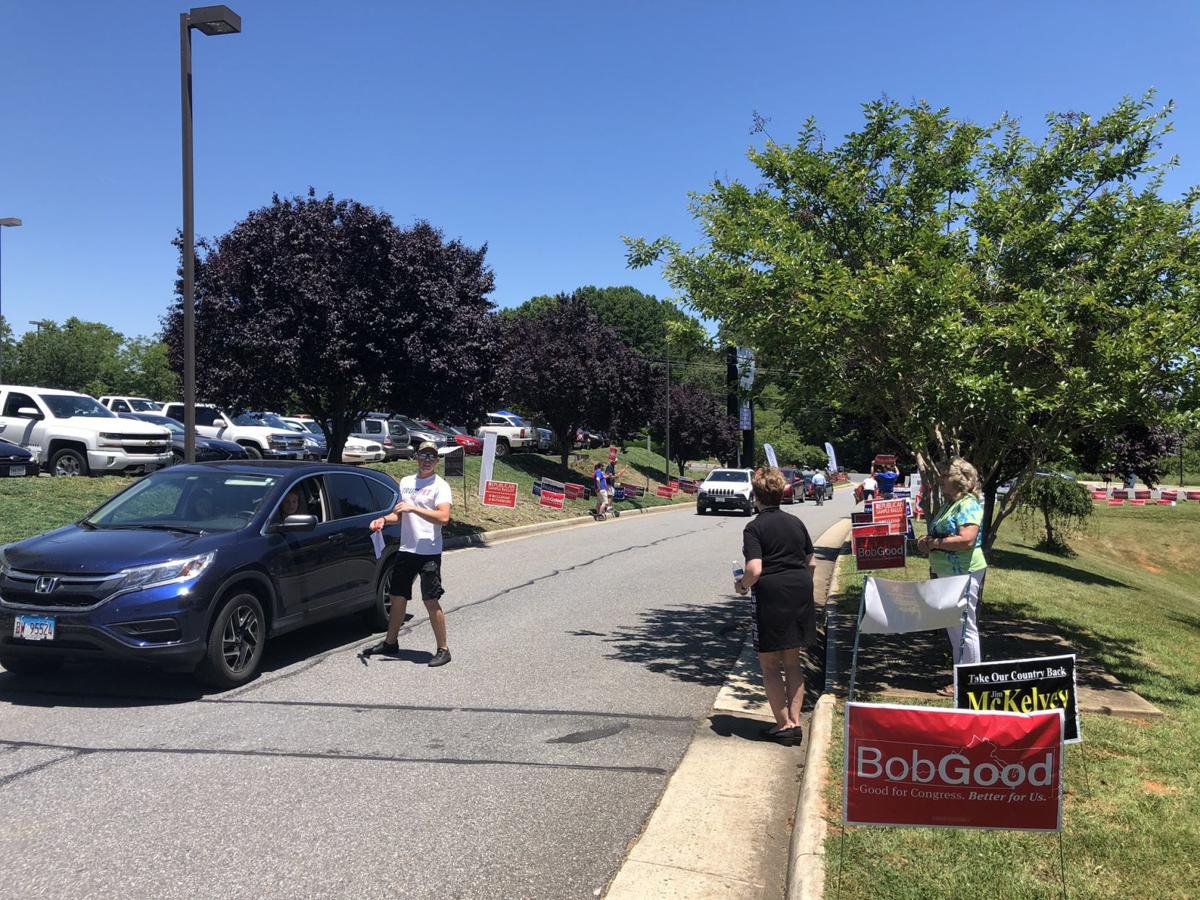 A car drives in to drop off a ballot in the 5th Congressional District Republican convention outside Lynchburg. 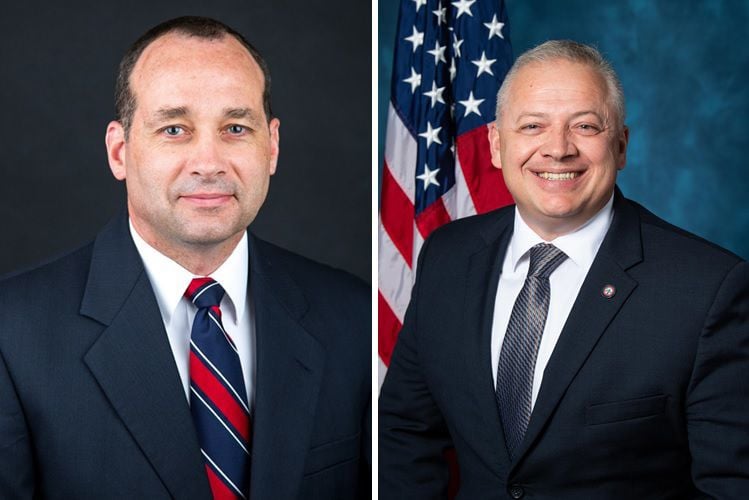 LYNCHBURG — Rep. Denver Riggleman, a first-term Republican from Nelson County, whose libertarian views and decision to officiate a same-sex marriage set in motion an intra-party challenge, lost his bid for renomination on Saturday.

Bob Good, a former Campbell County supervisor and Liberty University employee, defeated Riggleman, whom President Donald Trump had endorsed, with 58% of the vote. Good has described himself as a “bright red Biblical and constitutional conservative.”

The two faced off at an unusual drive-thru convention at Tree of Life Ministries in Campbell County. After more than 10 hours of voting, 2,437 delegates cast ballots.

Originally the convention was intended to take place indoors, but the coronavirus pandemic forced convention organizers to convert it to an outdoors contest.

People drove from all over the 5th Congressional District, which spans from Fauquier County to the North Carolina border and includes Franklin County and part of Bedford County, to participate in the convention at the church.

Cars weaved through the spacious parking lot so delegates could submit their ballots without getting out. More than 200 volunteers directed cars, handed out ballots and reviewed voter information. Few people volunteering to hand out ballots were wearing masks or gloves.

While some people waited 10 to 15 minutes to vote, others waited more than an hour. Convention organizers set up blocks of time for people to vote based on what locality they lived in, but the line for people voting outside of their assigned time block had bottlenecks throughout the day.

“A waste of time,” one man said as he got to the end of a voting line.

“Did you get to vote?” a poll worker asked.

It was unclear why he was unable to vote.

Three men carpooled together, but one of them lived in a different locality than the other two. So they had to drive through twice so the one person could vote in the line for the locality where he resides. Some people working campaigns reported people getting out of line and leaving because the wait became too long.

“Have you ever seen anything so absurd?” said John Whitbeck, the former chairman of the Republican Party of Virginia, who had been helping the Riggleman campaign.

Whitbeck credited the Republican committee that organized the convention for doing a good job planning it, but he said elections like this were never meant to happen.

Despite some issues, Melvin Adams, the chairman of the 5th Congressional District Republican Committee – which organized the convention – said he felt the convention went smoothly.

“I've been real pleased,” Adams said. “There were a lot of unknowns.”

Some people who didn't have to wait long said they didn't mind the drive-thru convention, saying it was better than sitting in an auditorium for several hours listening to speeches and participating in the drawn-out voting process.

“It went easier than I thought,” said Jim Miller, a former U.S. Senate candidate from Rappahannock County. “I thought it was marvelously well-run.”

Riggleman had favored using a primary, which would have given him an advantage as an incumbent with a larger war chest than Good.

“This is the most perverse way to choose a candidate,” Riggleman said Saturday before the results came in.

Good supporters favored the convention because it offered them a better chance at unseating Riggleman, whose libertarian positions have irked them. Riggleman officiating a same-sex marriage last summer inflamed social conservatives.

Jim Ardle said he's known Riggleman since the congressman was 19 years old. They both served in the military together. He drove from the Moneta area of Smith Mountain Lake and waited more than hour in line, but he said it was worth it to vote for his friend.

“He says what he believes,” Ardle said.

Ardle didn't like how activists attacked Riggleman for officiating a same-sex marriage. He said people should let others “live and let live.”

“They're tearing the Republican Party apart,” Ardle said of the people who organized a challenge against Riggleman.

The results weren’t announced until 1:20 a.m., more than six hours after polls closed. The Riggleman team had been challenging ballots cast in Campbell County, Good’s home county. Riggleman alleged “voting irregularities and ballot stuffing,” and he said he would be “evaluating all our options.”

Good will face the winner of the June 23 Democratic primary. The candidates are Roger Dean Huffstetler, a Charlottesville entrepreneur who lost the Democratic nomination for the same seat two years ago; John Lesinski, a former Rappahannock County supervisor; Claire Russo, a Marine veteran; and Cameron Webb, director of health policy and equity at the University of Virginia.

House Democrats are targeting the seat. Riggleman supporters have said they're concerned that Good is too conservative and his candidacy could risk the seat flipping blue. Riggleman defeated the Democratic candidate last cycle with 53% of the vote.

On Saturday, Kyle Kondik, managing editor for “Crystal Ball” at the University of Virginia's Center of Politics, said Good's win moves the district from likely Republican to leans Republican.

Following his win, Good needs to resolve a problem with his failure to file his candidate qualification paperwork to the Virginia Department of Elections before the June 9 deadline. He filed it on Friday.

There has been concern about whether this could result in his name being left off the November ballot, triggering nightmares of how Del. Nick Freitas, R-Culpeper, made that mistake last year and had to run a write-in campaign. Good's team has been reassuring people they are confident the Board of Elections will grant him an extension.

The Republican Party of Virginia has requested the deadline be extended, arguing that the deadline is usually the day the state-run primary is held. Gov. Ralph Northam delayed the primary until June 23 to provide election officials more time to prepare, but other deadlines weren't postponed along with it.

The Board of Elections meets July 7.

Democratic voters will head to the polls on Tuesday to pick their congressional nominee in what suddenly became an open seat in central Virginia.

Vehicles waiting to turn into Tree of Life Ministries on Greenview Drive in Campbell County just outside Lynchbug at mid-Saturday afternoon. Republians are using a drive-thru voting method to choose their nominee because of the coronavirus pandemic.

A car drives in to drop off a ballot in the 5th Congressional District Republican convention outside Lynchburg.