Marian Serge is pictured with Roanoke dentist Dr. Griffin Cross, who identified and extracted the parasite Gongylonema pulchrum from her mouth. It is extremely rare for the parasite to occur in humans. 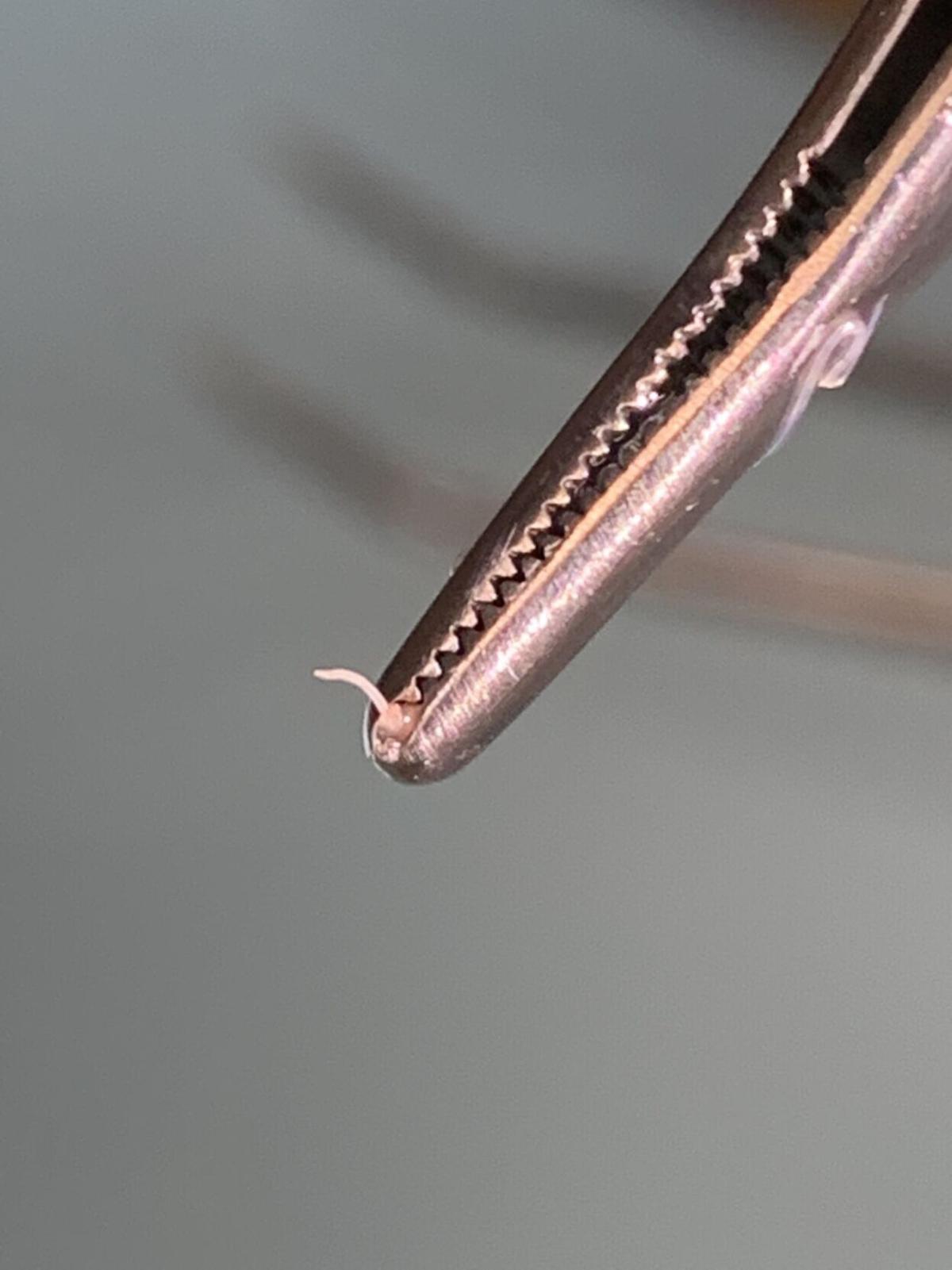 What started in January as an elusive rough patch in the mouth of retired nurse Marian Serge of Boones Mill was diagnosed months later to be an extremely rare case of the parasite Gongylonema pulchrum.

The mystery was solved, and the parasite extracted, thanks to some medical detective work by a Roanoke dentist.

Incidental human infections with Gongylonema are rare, according to the federal Centers for Disease Control. “Gongylonema pulchrum is a common parasite of domestic swine, sheep, goats and cattle, amongst other wild ungulate hosts,” the CDC noted.

Serge said she had not traveled out of the country and had no idea how she became a host to the parasite. “I’m not obsessed with thinking about how I got it because it’s so rare. I don’t care because I’m well and there’s nothing wrong with me,” she said.

The condition is rare indeed. The American Journal of Tropical Medicine and Hygiene reported in 2017 that approximately 60 human cases worldwide have been described.

“My story is that of an accidental host, and the story of my dentist is a story of caring, persistence, making the diagnosis and providing the extraction,” Serge said.

While plans are in the works for scientific papers to be written for the dental and medical communities, Serge wants to make sure the story about her dedicated Roanoke dentist, Dr. Griffin Cross, gets told.

With her background as a nurse, Serge kept a detailed log describing her experience with the parasite and medical community. Her log provided a wealth of information which has been condensed and used for retelling her experience.

For three or four months Serge experienced a rough patch in her mouth that would come and go. At first she didn’t think too much about it. There was no pain or itching. The rough patch would last less than half a day and would pop up again in a different place in her mouth after a few days or a week.

On April 8, Serge had an appointment for dental work and told Cross about the patches. He said for her to let him know the next time she got one.

Serge returned to Cross on April 13 for repair of a filling that popped out when flossing. The patch returned that day at an opportune time, allowing Cross to examine and photograph the area between her left lower jaw and tongue. He referred Serge to an oral surgeon, Dr. Albert Parulis.

Parulis examined Serge the next day, but the elusive patch was not to be seen. They discussed what the patches might represent, but Parulis didn’t think it was serious. He advised Serge to come back when the rough patch returned and he would take a look at it.

Later that morning, Cross called Serge, saying he had discussed her rough patch with his colleagues, researched similar cases online and had talked with Parulis. He wanted to reexamine her later that afternoon.

During Cross’s examination, he could not find the evasive rough patch. While Serge was still in the chair, Cross and his three assistants discussed the examination, her recent rough patch, the picture taken the previous day and explained to her what he learned from the research he did the night before.

Cross examined Serge’s mouth again, taking particular time on the left side where the rough patch was the day before. He looked and probed way in the back under her tongue and after a short while spotted what he had anticipated. After some more probing and after trying three different dental tools, he was able to extract a parasite.

His assistants took pictures and Cross said that if he was correct, it would be a very rare diagnosis with only 60 people in the world having had it and only 14 in the United States.

Serge said Cross called early the next morning to see how she was and to say he was almost certain of the type of parasite she had. They also chatted about the previous day’s “adventure.”

On April 16, Serge had an appointment with Garner. Serge said she received the red carpet treatment when she arrived. “The staff was so excited and happy to see me,” she said. “I never thought having a parasite would bring me so much attention.”

In a phone interview, Garner described Serge’s case as something new and different since the situation is so rare and something that’s just read about in books.

Serge said that Garner examined her, took her history and listened to her story about the rough patch. Garner said Serge had Gongylonema pulchrum and gave her a brief history of the occurrence of the parasite in the U.S., noting a man in Georgia and one in Williamsburg have had it.

Garner said Serge’s case was a very rare incident and called Serge an accidental host. Garner had spoken with Cross, Parulis and Jonathan Allan, a biologist in Williamsburg, who also had the parasite and they all thought most likely the parasite was a Gongylonema pulchrum.

Serge expressed her gratitude for Cross’s efforts and concern regarding her case, noting the time he spent researching and calling to check on her. “That’s what makes him special.”

Serge said she never felt fearful about her condition knowing how attentive Cross had been to her well-being. “I had so much faith in him. I was in good hands. I never worried one second.”

Garner also had praise for Cross, saying since so many people have never seen or heard about Gongylonema pulchrum in humans, there are very few who are considered experts. “Dr. Cross gets all the credit.”

Even though Serge said her case was “so rare no one else should have to ever worry about getting it,” she does think dentists really need to know about it.

Cross said that even with the case being so rare, it’s good to be cognizant about it should a patient come in complaining of a rough patch. “A dentist is the first line of defense for oral health,” he said.

“I honestly just think it was my job, my responsibility to gather the information to treat her properly as a patient,” Cross added about what it’s like to be part of such a rare discovery.

Marian Serge is pictured with Roanoke dentist Dr. Griffin Cross, who identified and extracted the parasite Gongylonema pulchrum from her mouth. It is extremely rare for the parasite to occur in humans.